When the dust settles, there’s little doubt the box-office champ of 2015 will be Marvel’s Avengers: Age of Ultron, a guaranteed blockbuster smash that pits the worlds greatest heroes together against a formidable adversary. In line with Marvel’s cinematic universe, the company’s television tentacles keep coming out and snatching surprise from me, something I wasn’t prepared for when I gave up on Agents Of SHIELD at about episode four. I still haven’t gone back to it, even though I’m told “it’s improved”. Agent Carter, on the other hand, I adored.

2015 also saw the 13-episode series Daredevil, financed by Marvel and online film and television distributor Netflix, released to the public en masse – similarly to House Of Cards, the binge-watch crowd lapped up Daredevil’s assault on bandwidth during mid April, and the results have been nothing short of spectacular.

This article contains mild spoilers for the Daredevil television series.

If Age of Ultron is the box-office success in Marvel’s hat for this year, then Daredevil should be firmly the frontrunner to Emmy and Golden Globe poster-child for critical success. Similarly to Iron Man’s rise to the top of the super-hero heap, thanks in no small part to Robert Downey Jr’s charismatic portrayal of Tony Stark, Daredevil takes a little known (to the vast majority of audiences) Marvel hero – previously essayed by current Batman, Ben Affleck, in a dire 2003 cinematic outing – and thrusts him into the MCU universe via the small screen. 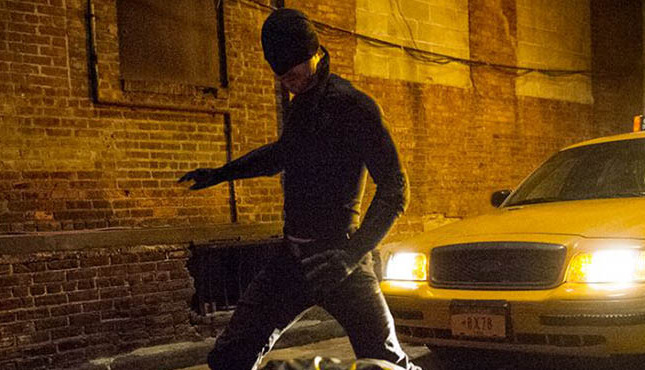 Daredevil takes place some time after the events of the The Avengers, when New York City is in its rebuilding phase. Young lawyers Matt Murdock (Charlie Cox – Stardust) and Foggy Nelson (Elden Hensen) have been best friends since college, and have started their own law firm with the hope of helping the helpless. They soon become mixed up in the machinations of a powerful group of criminals, led by a mysterious man named Wilson Fisk (Vincent D’Onofrio), who for the majority of the series is the “power behind the scenes”, the…. kingpin, if you will. Murdock also moonlights as a masked vigilante, colloquially called “the black mas” and “the devil of Hell’s Kitchen”, and since being blinded in a freak accident at aged 9, has developed superhuman hearing to the point where he almost doesn’t need eyes to “see” what’s happening around him. His enhanced hearing, together with a mastery of martial arts, enable him to take the fight for justice to the streets, where he defends the helpless and fights crime. Kinda like a blind Batman. 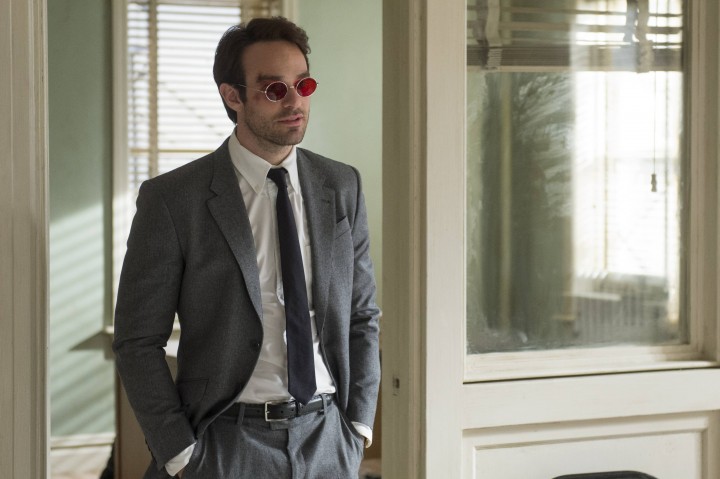 I admit, I still didn’t really know much about the character of Daredevil, with the very minimal amount I’d gleaned from my comics days, and what little subtext I could pickup from my recent re-watching of the Affleck disaster. The character felt altogether too similar to DC’s caped crusader, in as much as Marvel’s Quicksilver appeared to be a direct rip-off of The Flash in everything but name and skillset. They even have similarly tragic upbringings – Murdock’s father, a career prize fighter, is killed after switching the intended result of a fixed fight, leading Matt to want to use his abilities to prevent that kind of thing happening to anyone else. Bruce Wayne’s obsessive personality in Batman, and his tragic origin, is reflected enormously by Matt’s desire to do much the same thing, only without a vast bank balance or a fancy butler to aide him. 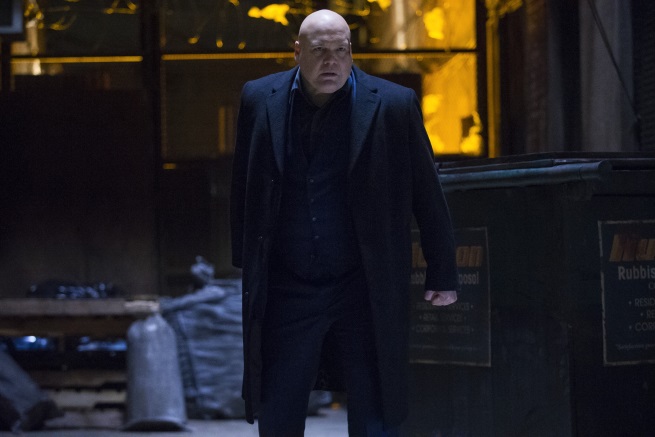 Conceived and written (at least the first few episodes) by Cabin In The Woods helmer Drew Goddard, Daredevil is entirely an origin story. It takes until the final episode, and even then, the last few minutes, before we see Daredevil in his full costume. The preceding episodes have Matt fighting in a black outfit that’s as perfunctory and un-emblematic as they come. The 13 episode nature of the series allows for greater depth to the characters, much moreso than a film would provide. Goddard’s opening salvo, followed by 10 more excellent-to-stunning and 2 more above average episodes, are superbly rendered, with only a few minor caveats preventing what some critics would argue warrants a perfect score. 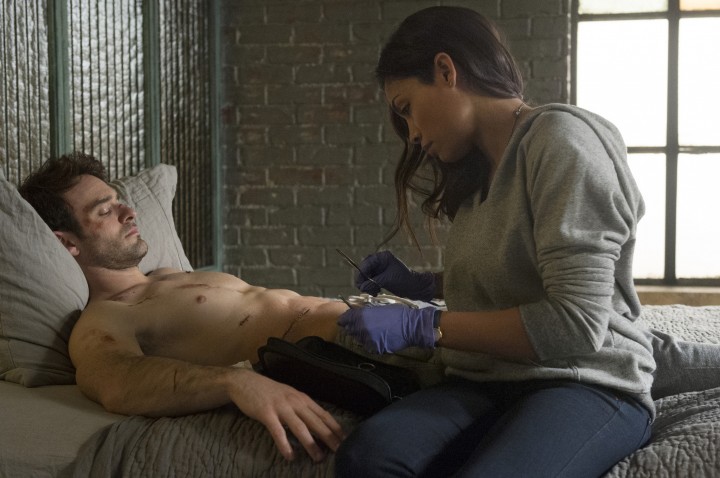 The narrative works on the modern prerequisite of spending at least one or two episodes focused on the origin or narrative of a single character – Murdock’s collegiate relationship with Foggy is played out in Episode 10 “Murdock Vs Nelson”, while Wilson Fisk’s tragic upbringing is retold in Episode 8 “Shadows In The Glass”, and Matt’s martial arts training is given light in the Scott Glenn guesting episode, “Stick”. While the overarching narrative weaves and permeates throughout the 13 episode run, the subplots, subtext and sudden twists to the story allow for many a nice cliffhanger – although none more startling than Episode 11 and Episode 12. Occasionally, the series does seem to take the slow road to get anywhere, and some will find the running subplot featuring Deborah Ann Woll’s Karen Page (another comic book character) and Ben Urich (here played by Vondie CurtisHall, replacing the portrayal of the same character by Joe Pantoliano in the 2003 film) a tad overblown in their importance to the story; but you cannot fault the series’ blazing style, nor its kickass realism. 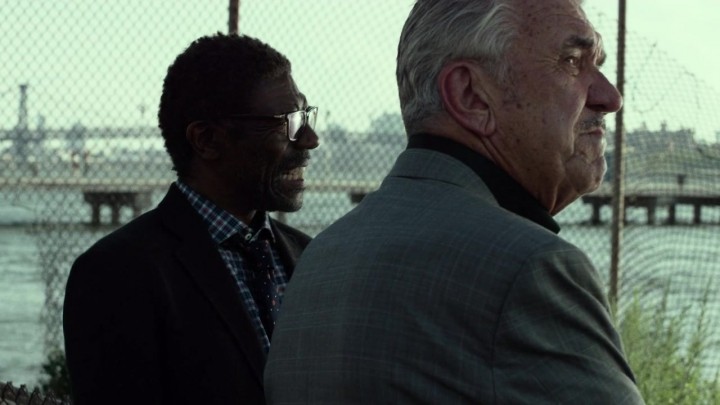 The story threads through Wilson Fisk’s “dream” of rebuilding a shattered Hell’s Kitchen to be a modern marvel of New York City architecture. He wants to tear down old tenement buildings, and in order to do so, uses some underhanded methods via the Chinese mafia, two Russian mobsters, and a Wall Street businessman (played by Bob Gunton – The Shawshank Redemption). This intricacy builds the tension, as betrayal, subterfuge and even plain murder and depravity, come to play within Daredevil’s melting-pot of darkness and melancholy. The series is incredibly dark, especially in light of the relatively straightforward Agents Of SHIELD, and the glossy throwback of Agent Carter. Bodies are beaten, heads pulverized, bones snapped, heads removed and all kinds of physical hardships are thrown on Matt as he leaps and bounds through the night trying to stop Fisk’s plans. 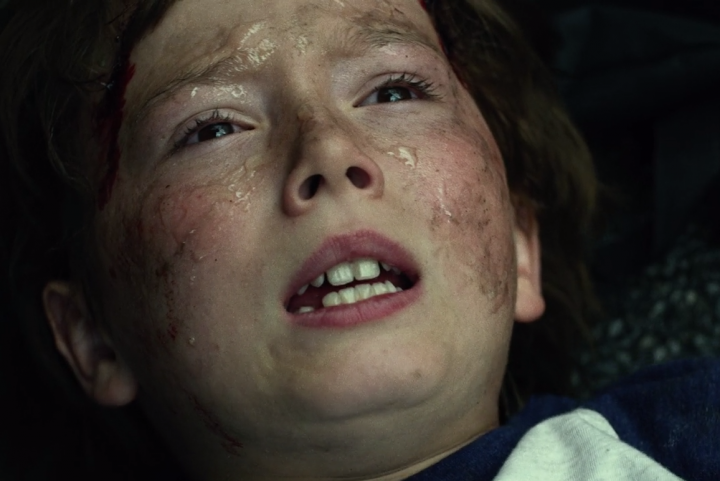 Where the series succeeds most, and for me remains the most memorable element of Marvel’s universe building, is the casting. Not a single person puts a foot wrong in this show, and one in particular elevates Daredevil to absolute greatness. As Matt Murdock, Charlie Cox is terrific, and several orders of magnitude better than Ben Affleck in the role. Makes me nervous about Affleck’s Batman, to be honest. Deborah Woll and Elden Hensen make great foils for Murdock’s vigilantism, and as characters they have their own solid arcs as well (instead of being supporting players, they actually contribute meaningfully to the show). Rosario Dawson has a recurring role as a nurse who tends to Matt’s wounds after she finds him in a dumpster one night, and her character seems to be almost apologetic that Murdock feels he must do what he does in order to get things done. Vondie Curtis-Hall is wonderful as the old-timer newspaperman, reconciled to his dementia-afflicted wife and a newspaper going nowhere; Urich’s arc is the most tragic, and as a metaphor for the 24-hour news cycle of media saturation we have today, it’s agony to see him swing for the fences and miss. 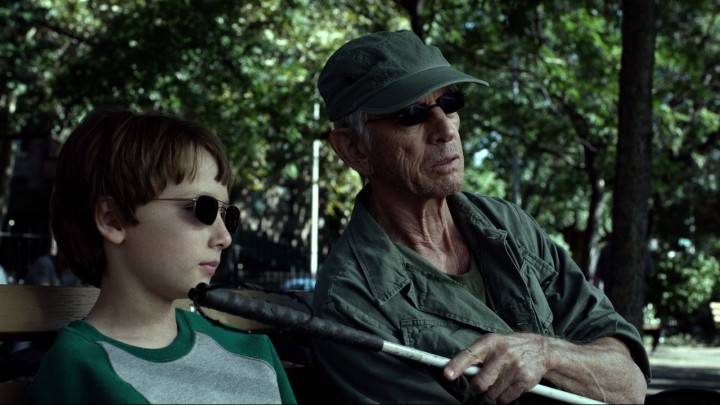 But the real star of Daredevil isn’t Matt Murdock, or the rest of the cast: in my opinion, the revelation of Daredevil is Vincent D’Onofrio as Wilson Fisk. The character of Wilson Fisk was last seen on screen in the visage of the late Michael Clarke Duncan, opposite Ben Affleck’s Murdock. The Kingpin (although never referred to as such within this series) starts off as a nameless, faceless power figure behind the scenes, before Murdock’s prodding and digging and tugging at the frayed edges brings him into the light. D’Onofrio is truly frightening as Fisk, while bringing a humanity to the character that just took my breath away. If I put it simply, D’Onofrio as Fisk is Heath-Ledger-as-the-Joker good. Episode 8, “Shadows In The Glass”, is for me the true zenith of this character, appropriating both audience empathy and sympathy – and he’s a goddam psychopath, which makes it all the more incredible! – and making us at least feel for Fisk’s pathway of death and misery. D’Onofrio has always been a class actor, from Kubrick’s Full Metal Jacket, to Men In Black’s central villain, to television series Law & Order: Criminal Intent, but Daredevil is his masterwork. Just mesmerizing, Vincent. Breathtaking. 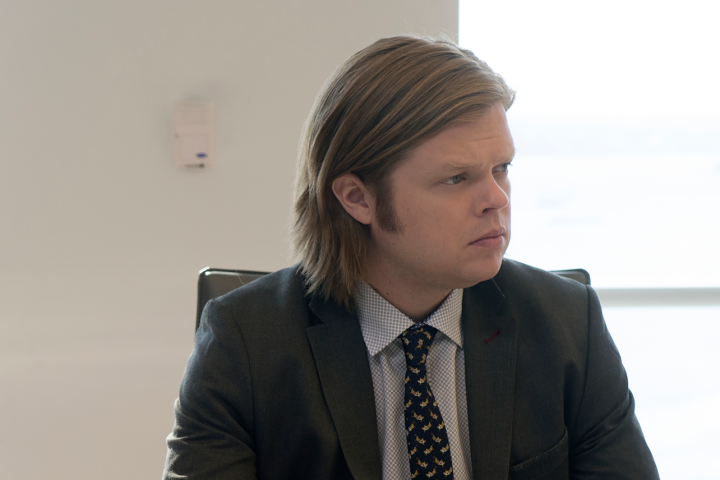 The only caveats with Daredevil that I could possibly extoll is the aforementioned subplot with Karen Page and Ben Urich, which goes on a little longer than necessary (IMO), and the final reveal of Daredevil’s full costume at the end of Episode 13. While I admired the series’ dedication to making the costume as “realistic” as possible (it’s body armor and such), the mask Matt wears is pretty horrendous. It looks like a ski mask mixed with Nolan-Batman’s angular aesthetic, and compared to the rest of the suit, clumsy as hell. But if you see that all I’m picking on is a piece of costuming and a relatively minor character subplot, you’ll see that Daredevil doesn’t have enough problems to make itself a misstep. 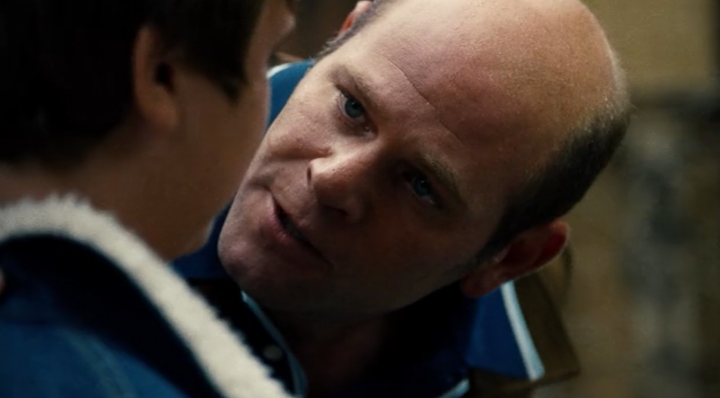 This review-that-isn’t on Daredevil should only really tell you one thing. Marvel’s vision for their characters is as assured now, in 2015, as it was back when Iron Man first came out. The Netflix platform allows for greater violence and thematics than network television might allow, so understandably some will connect more with this series than Agents Of SHIELD (although both can be appreciated equally for their strong/weak aspects) but it’s pure and simply a damn good show. I think we’re living in a wonderful age of blockbuster television – Daredevil’s Netflix arrival almost simultaneously with the fifth season of Game Of Thrones (on HBO) is testament to the quality of shows released by people who care about the product they give us.