Director :  Shawn Levy
Year Of Release :   2014
Principal Cast :  Ben Stiller, Robin Williams, Owen Wilson, Steve Coogan, Ricky Gervais, Rebel Wilson, Skyler Gisondo, Dan Stevens, Rami Malek, Patrick Gallagher, Mizuo Peck, Ben Kingsley, Dick van Dyke, Mickey Rooney, Bill Cobbs, Anjali Jay, Voice of Brad Garrett + Regina Taufen.
Approx Running Time :   98 Minutes
Synopsis:   Larry the Nighwatchman must travel to England to discover why the Tablet of Ahkmenra is losing its powers. Along the way, he meets fabled Knight, Sir Lancelot, as well as an ancient Egyptian Pharaoh.
What we think :  Limping to the finish line often brings an audience to its feet. We root for the underdog, no matter how they struggle. Watching Secret of The Tomb limp towards the closing stretch is a futile exercise in mediocrity. Bereft of genuine charm, and suffering a distinct sense of the verve encapsulated in its vivacious second entry, this third, bungled museum-hunt will have you checking your watch rather than the screen.

It’s fair to say the Night At The Museum movies were never meant to be high art – hell, they star Ben Stiller, who remains one of the most overrated “comedic” stars in Hollywood, so you could be forgiven for thinking them something of an ego piece – and as an example of audiences tapping into their light, breezy high-concept mantra of fun-n-adventure, they’re relatively cheery entries into the hijinks genre. Secret Of the Tomb, the third and final entry into the franchise, sees the entire original cast return (including Dick van Dyke, the late Mickey Rooney, and Bill Cobb, who played the first films’ villains) and the introduction of some new – and painfully inane – characters. Again, considering this film isn’t meant to be focused on winning an Oscar, you give a little slack for things such as character development or backstory (the film assumes you’ve seen the first two films, duh), and in saying that this movie has plenty working in its favor. Yet, hints of bitterness and a decided lack of zesty humor (most of which comes from Stiller, weirdly) skewer the grandiose conclusion to this nighttime lark in the halls of the worlds great museums, a franchise I’ve no doubt has benefited students and learning institutions across the globe. 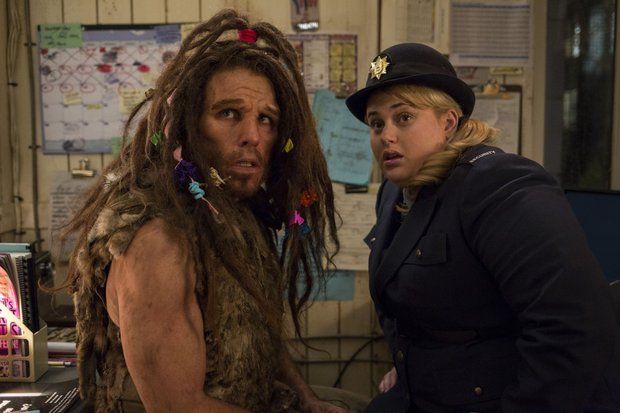 Stiller returns as Larry Daley, the nightwatchman at the New York Natural History Museum, where the exhibits come to life each night thanks to the power of a magical Egyptian tablet. However, when the tablet starts to fail, and the exhibits, including Teddy Roosevelt (Robin Williams, in one of his last roles), Atilla The Hun (Patrick Gallagher) and Sacagawea (Mizuo Peck) begin to show signs of returning to their inanimate state, Larry learns through Ahkmenrah (Rami Malek) that the secret to the tablet lies with his parents, Pharaoh Merenkahre (Ben Kingsley), and Queen Shepseheret (Anjali Jay), who reside in the British Museum in London. Arriving in London, the tablet wakes up the exhibits in that museum, including mythical knight Sir Lancelot (Dan Stevens), who decides to keep the tablet for himself rather than return to a waxwork state. 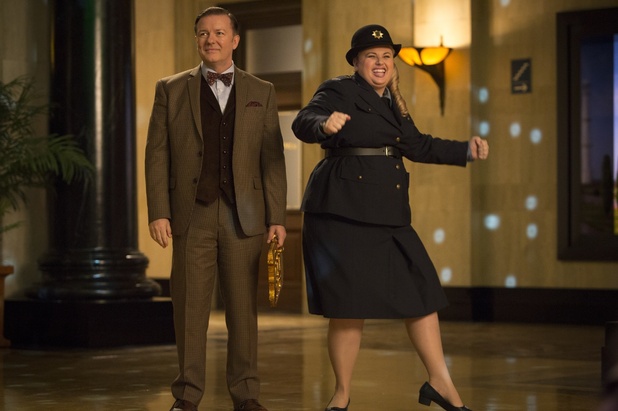 Secret of the Tomb doesn’t hold many secrets. As a story, its convolutions revolve around the rather trite father-son bonding moments between Stiller and his on-screen son, Nicky (Skyler Gisondo, who looks bored throughout this), while the tablet-running-out-of-magic stuff is predictable and often ruined by convenience. Yeah, the film’s overarching narrative is less a story of character development or empathetic audience moralizing, and more about a gamble of set-pieces that, by and large, are hit-and-miss more than solid gold. The journey to Britain isn’t particularly inspiring, it’s incredibly dull and rooted in lame continental jokes and an off-key parody of Sir Lancelot that feels right at home in an old Danny Kaye movie. Dan Steven’s square-jawed performance is on-point for the role, I suppose, but the knight’s inherent lack of nobility, replaced instead with foolhardy ignorance and a refusal to acquiesce to the truth, is borderline angering, and problematic for the film. The film’s key issue is its lack of genuine villain, and turning Lancelot into a misguided one doesn’t work as well as it should. 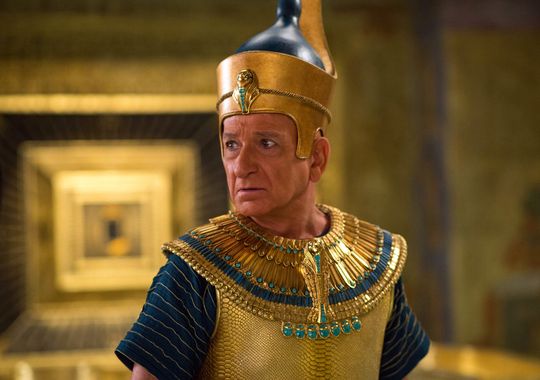 In saying that, the film is held together by the cast, and the uptight Stiller’s po-faced humor (like it, or not – for me, not) is once again central to the story. Stiller works his charms again, although he’s definitely not as “in” the movie here as he was in the previous installments. Can anybody say “paycheck”? I know Stiller probably dud. I mean, did. Robin Williams is underused and incredibly shoved aside as Roosevelt here, while franchise luminaries Attila the Hun, and Steve Coogan’s Roman soldier and Owen Wilson’s cowboy are simply making up the unfunny numbers (a gay subtext for Coogan’s character is off-putting in its political incorrectness), so you kinda get the sense that director Shawn Levy and his screenwriters, David Guion and Michael Handelman, began to run out of ideas for this third movie while in pre-production. The only – and I mean, only – redeeming feature of this movie is a sequence set inside an Escher portrait, and by God if that’s not the cleverest thing in an otherwise dull film, I’ll eat a hat. 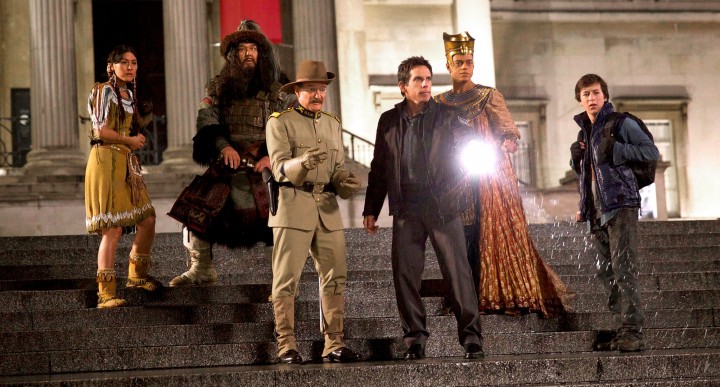 Conventional Hollywood wisdom would seem predicated on going bigger, better, best with a third film, lowering the budget and expecting audiences to just eat it up. Secret Of The Tomb does seem to simply expect the audience to turn up, and actually does very little work to imbue itself with a sense of fun, irony or plain ol’ wit. With Stiller struggling to inject humor, and Rebel Wilson’s incredibly stupid British Security Guard routine landing flat on its face (this girl has one schtick, and now that audiences have figured it out, it’s running out of funny, and fast), the film lurches from silly set-piece and random non-sequitur moment to the next. In many respects, Secret Of The Tomb actually treats its audience with contempt – take, for example, the obviously clumsy “Pompeii” sequence, where Cowboy and Roman Soldier land in an old Roman town where they spend about five minutes not noticing the impending volcanic eruption behind them. So stupid, so breathtakingly clusterf@cked by Levy’s sledgehammer direction, you’ll be rolling your eyes at having plonked down ten bucks to go see it. And whoever decided to have Stiller play a dual role of a caveman type with the intellect of a doorstop, needs to be kicked, and hard. Ugh. 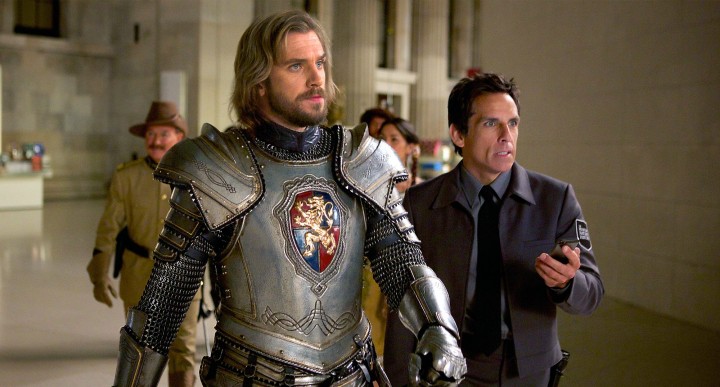 Night At The Museum: Secret of The Tomb isn’t a great film, not in the sense that it rouses the laughs or distracts with fun and adventure. Routine, sluggish direction and a predilection for unkempt laughs and risible story “twists”, plus a lengthy cameo by Wolverine and Carol Marcus, merely add to the indigestible inanity that infests this film. Ben Kingsley’s legacy will forever be tainted by his role as the Pharaoh, while Robin Williams (and Mickey Rooney, now that I think about it) deserved better than this. The film looks inward, knowing in-jokes at the expense of the franchise’s history scattered throughout (not once does the monkey slap Stiller, a disappointing end to a great screen duo in cinema, I think) and there’s a trepidation to really extend itself beyond being merely adequate. Frankly, Secret Of The Tomb deserves reburying, plugging the gaping hole of 90 minutes I wasted with its watered down humor and scattered plotting.

2 thoughts on “Movie Review – Night At The Museum: Secret Of The Tomb”