When in doubt, fudge the truth.

The last time the story of the Enigma problem crossed the big screen, it was Dougray Scott’s enigmatic (pun intended) Enigma, and Jonathan Mostow’s blockbusting submarine thriller U571, doing the heavy lifting. While U571 was a fabrication in every way, and Enigma’s fictional characters undertake actual historical dramatizations, it’s taken until The Imitation Game for the story of Allan Turing, here played by Benedict Cumberbatch, to be brought to life in any populist manner. The Imitation Game is a biopic replete with a terrific cast, high production values, and a really great story, and anyone with even a passing interest in history is advised to give this one a go. Told through a three-pronged narrative, The Imitation Game tries to detail the complexity of Turing’s life, as the father of theoretical computer science, and it mostly succeeds – if by intent one could consider it a success. 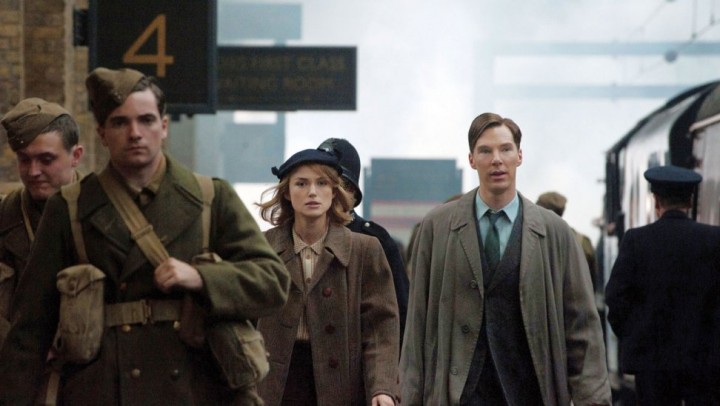 Allan Turing (Benedict Cumberbatch) is approached by the British Government to undertake a mission to decode the Nazi Enigma cypher during World War II. Considered an impossible task, since the key to the cypher changes at midnight each day, and the British are unable to decode it in time to make any difference, Turing figures that a machine is the only thing capable of decoding the German messages. As he builds his “Turing Machine”, the military becomes frustrated by his delays, and gives him an ultimatum to decode the codes within a month, or be fired. Turing turns to a woman, Joan Clarke (Keira Knightley), who provides assistance, and his team of decoders, Hugh (Matthew Goode), John (Allan Leech), and Peter (Matthew Beard), in order to break the code and deliver the Allied forces the intelligence needed to beat the Germans.

The film seems to want to focus more on the deconstruction of the Enigma riddle than it does Turing’s insecurities and off-putting personality, and the film’s undertaking of his treatment post-war, when he was arrested for being homosexual and sentenced to hormone therapy instead of prison, before committing suicide in 1954, aged only 41, is appallingly clumsy. Turing’s personality mirrors in many ways that of Sheldon Cooper from The Big Bang Theory, and Cumberbatch’s performance as Turing is equally as enthralling as that of Jim Parsons, with all manner of tics and peccadilloes on display that aren’t as overt as they are organic subtext delivery. Turing is an abrasively cock-sure character, although he’s unaware of things such as sarcasm and humour, a by-product of his hyper-mathematical mind robbing him of a personality we might find “acceptable”. His confrontations with the military, personified through Charles Dance’s Commander Alastair Denniston, are uniquely funny in that Turing knows how smart he is, and doesn’t care if Denniston doesn’t know what’s going on – Turing’s pursuit is the story here, not the success and certainly not his personal life.

The Imitation Game does capture some of Turing’s aching heart, though, with his relationship to Joan Clarke, to whom he was briefly engaged even though he was gay (a criminal act back in the day, apparently, and a factor the film only cursorily examines in any detail) is handled with confidence by the script’s truthful qualities. Turing, as a tortured soul who “nobody understands”, is the definitive misunderstood artist, his focus only for his work, a trait not many people can appreciate today. What broke my heart, though was the performance of young Alex Lawther, as a school-aged Turing, who’s deep mutual infatuation with one of his classmates provides a platform of understanding for the man’s tortured personality as the film goes along. Lawther gives an Oscar-calibre performance on his own; as anyone who has ever had a love lost without reconciliation will attest, it’s the most sharply painful of loves indeed. 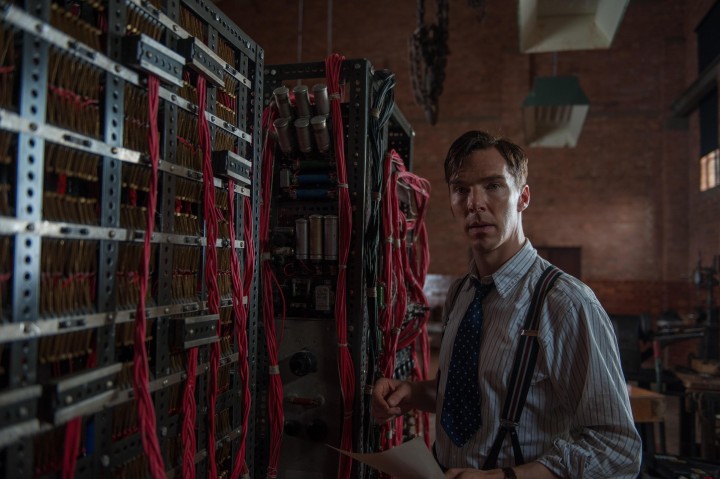 Following Cumberbatch’s lead, Keira Knightley seems to have a great time as Joan, although her part doesn’t have the same depth and development as Turings. Knightley can’t summon the same evocative screen chemistry as her co-star here, with Cumberbatch outshining her at almost every turn – Knightley’s key scene is a moment where Turing reveals his homosexual nature to her, and the actress delivers an understated sense of surprise that counterpoints Turing’s tortured revelation. Mark Strong, as an MI6 agent, provides reassurance for Turing that he has allies, and Charles Dance’s uppity Commander is predictably hard-nosed and unflinching. Matthew Goode, as one of Turing’s team in code breaking, is solid in an underwritten role, while the rest of the cast tend to become set-dressing for Cumberbatch to do his stuff. 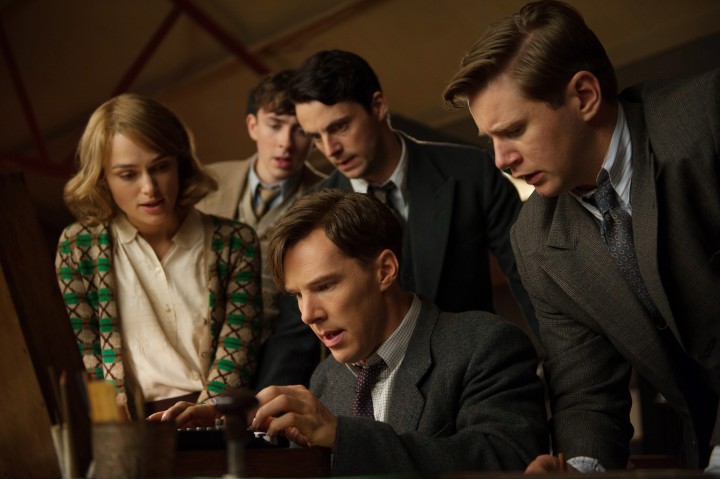 As I alluded to earlier, one of the film’s most grievous mistakes is the resolution to Turing’s homosexuality. While the most potent narrative occurs with the “early years” arc, and the “breaking the code” material, the “present” plot-line occurs some time after the war, with a police detective going above-and-beyond to try an uncover the mystery to Turing’s abruptness and curt refutation that anything is amiss when they’re called to a burglary. Turing’s decision to use Detective Nock (Rory Kinnear) as something of an interrogation-room sounding board for his tortured soul is intriguing, but it comes too late in the film for it to make the kind of emphatic notion of guilt and innocence the movie is working towards. Turing, accused of homosexual behaviour, was sentenced to either 2 years in prison, or hormone therapy to “cure” him of his gayness – apparently, this was the norm between the 1800’s and as recent as the 1950’s, an appalling act of barbarity by the British establishment that is barely touched on until very late in the film. The battle between Turing’s feelings for men, and his drive to crack the Enigma code, is mishandled by director Morten Tyldum, who hones in on Turing’s computer work with more verve than he does the darker, pointed “gay” subplot. If the problem with Turing was his “gayness,” as overt or otherwise as it might have been, the film’s character drive is relevant to that, rather than his work on Enigma. 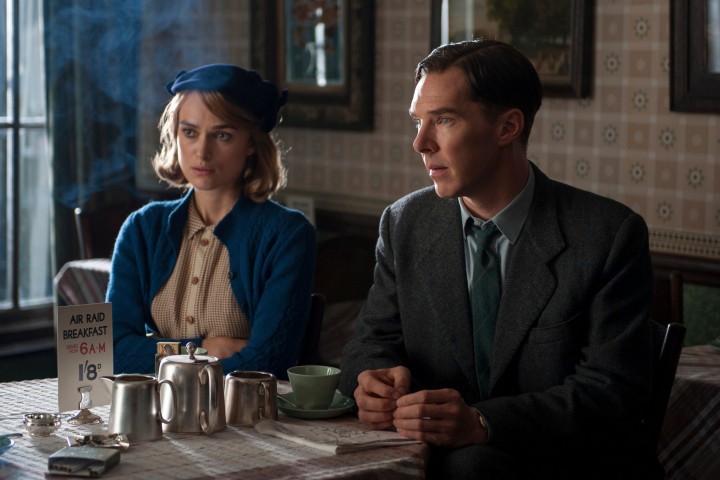 The Imitation Game is most certainly an assured work of fact-fiction, a biopic that has plenty to say about not only Turing, but the world he lived in at the time, and although the film spends much of its time working the join-the-dots story with ease, it never takes a risk. The Imitation Game is decidedly risk averse, as it were – Turing was officially pardoned by Queen Elizabeth in 2013, some 50 years after his apparent suicide, so I’m guessing nobody wanted to make a film about him that could be considered “controversial” – in spite of its inability to really grist the mill, it’s a compelling and thrilling look into one of the most unsung heroes of the second world war.