Back in the day, I wrote that Babel, an early film from Alejandro Gonzalez Inarritu, was one of the greatest films I’d ever seen. I stand by that statement. Birdman might just be a better film. Not only from an acting perspective, but as a technical achievement. I’m using short sentences this time, because I’m afraid that effusive praise of the kind I usually give will somehow break the charade of this film’s allure, and I don’t want that. Birdman’s one of the most astonishing, visually audacious films I’ve seen in my short career as a film blogger. Inarritu, one of cinema’s great auteurs, one of its true Renaissance men, has crafted a film of such poetic, human beauty, it makes your soul ache. People visit the Louvre to worship at the altar of great artwork. People should visit the cinema or torrent sites to worship at the altar of Inarritu’s artistic accomplishment; Birdman is destined to be an American classic – hell, not just an American classic, but an all-time hall-of-famer. 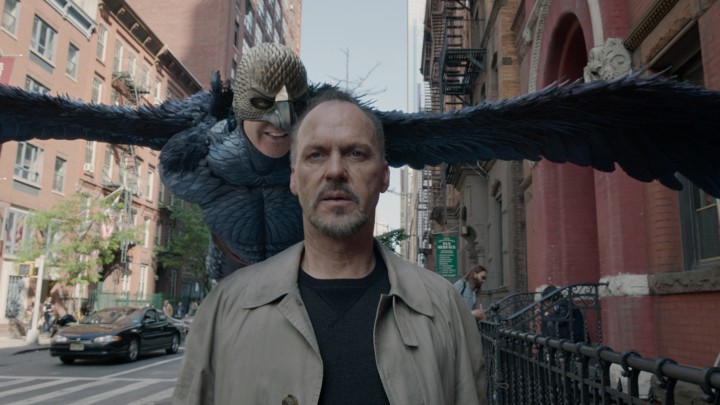 Plot synopsis courtesy of Wikipedia:  Riggan Thomson (Michael Keaton) is a washed-up Hollywood actor famous for playing the superhero Birdman in blockbuster movies decades earlier. Riggan is tormented by the voice of Birdman, who criticizes him. Riggan imagines himself performing feats of levitation and telekinesis. Riggan hopes to reinvent his failing career by writing, directing, and starring in a Broadway adaptation of Raymond Carver’s short story “What We Talk About When We Talk About Love”. The play is produced by Riggan’s best friend and lawyer Jake (Zach Galifianakis), and also stars Riggan’s girlfriend Laura (Andrea Riseborough) and first-time Broadway actress Lesley (Naomi Watts). Riggan’s daughter Sam (Emma Stone), a recovering addict, serves as his assistant. During rehearsals, a light falls onto an actor Riggan does not like; Riggan tells Jake he caused the light to fall so he could replace him. Riggan casts the brilliant but volatile method actor Mike (Edward Norton). 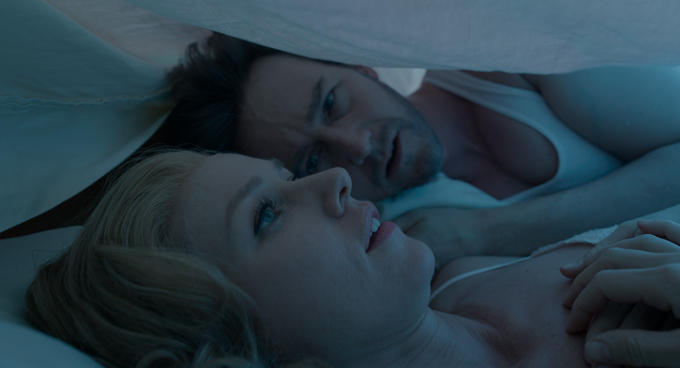 Every so often, one comes across a film of such ethereal beauty, such cathartic, schismic creative elevation, it’s nigh impossible to describe. Birdman is such a film. Led by a commanding comeback performance by Michael Keaton, whose last good film was either Multiplicity or Jackie Brown (the latter of which was more an ensemble piece) nearly 20 years ago, as well as a hilarious turn by Edward Norton, and the wonderful Emma Stone, Birdman riffs on the “showbiz” genre film and delivers a product worthy of standing ovation. Keaton’s towering leading man role is filled with bristling intensity and mournful sorrow, carving a canyon of emotional baggage through Birdman’s effluvium of human tragedy. 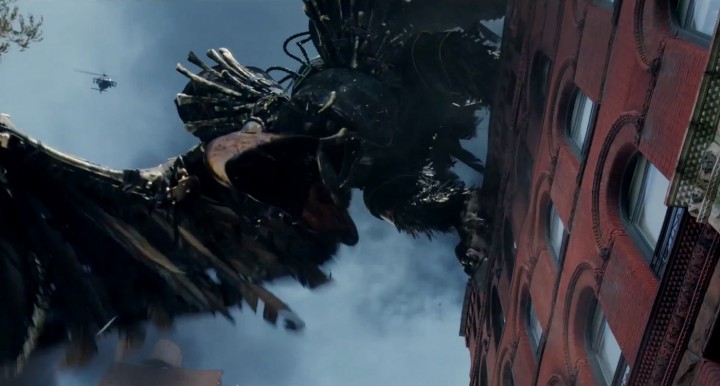 Keaton’s Riggan is a has-been, a former superhero-actor (just like Keaton himself, ironically!) desperate to remain relevant in a world increasingly less relevant to him, layered with the stubbly homeless-esque, nomadic insecurity of his craft. Keaton masters the role, invests himself inside it, punching well above his weight to astonish and delight viewers with one of the most commanding screen roles he’s ever had. And that includes Batman. Keaton’s off-sider in this work is Ed Norton, himself no stranger to bizarre film projects (Fight Club, anyone), and his turn as the antisocial narcissist (and convoluted “method” actor) Mike is one for the ages. I never thought I’d see the day when I laughed so much at another man’s penis, but man, that rocked me. Ahh, if you haven’t seen this film, you won’t get it, but it’s worth a look. 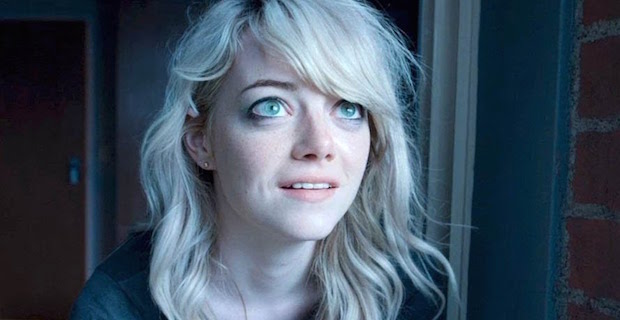 Keaton and Norton are fantastic, but would be nothing without some acutely brilliant supporting actors. Emma Stone, as Riggan’s former junkie daughter Samantha, is foul-mouthed, angry, beautiful; Stone deserves mucho kudos for this role, it’s a far cry from her Spider-Man and Easy A work, with her natural comedic timing utterly restrained and inward focused. Zach Galifianakis vanishes into his performance as Jake, Riggan’s lawer/producer/agent friend, almost unrecognizable within the part, and unfettered by a need to overcompensate for being a vastly unfunny dude by actually being hilarious here. Naomi Watts has some nice stuff to work with, and Oblivion’s Andrea Riseborough bounces off both Watts and Keaton with a kind of frigid sex-appeal that adds zing to the undercurrent of actorly anxiety. 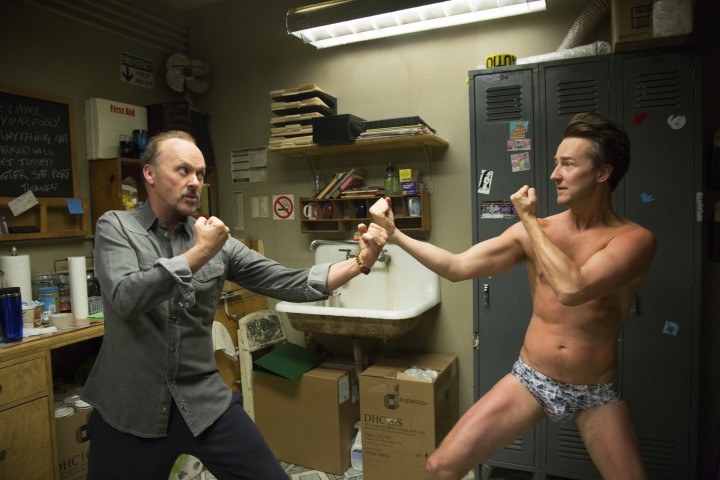 Although deftly led by Keaton and Co, the film’s technical prowess is just as marvelous. Shot to feel like it’s all happening in one continuous take (a thoroughly experimental style made popular in films such as Russian Ark and the movies of fellow Mexican director, Alfonso Cuaron) and filled with some breathtaking imagery (a scene with Keaton atop the skyscrapers of New York City, perhaps about to jump off, is particularly elegiac in nature) accompanied by a jazzy, percussive soundtrack as enigmatic as any you’re likely to hear, Birdman’s visual accomplishment is as gritty and visceral, and as textured and mesmerizing, as it’s possible for film to be. 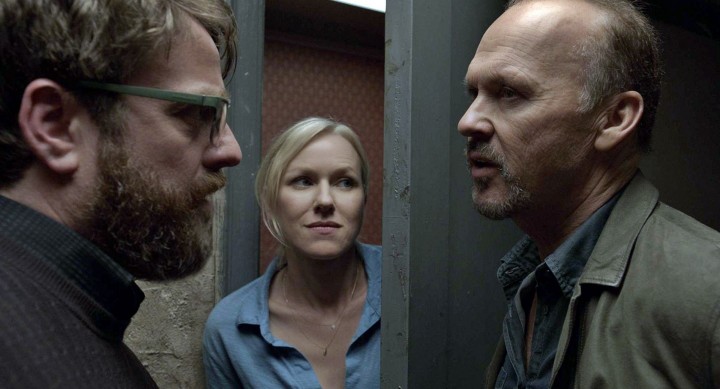 If I was about twenty years younger, I’d have considered Birdman to be a weird, hallucinogenic experience that is both deluded and utterly insane. Thankfully, I’m old enough to appreciate the true artistry of this hypnotic movie, controlled with an almost Kubrickian sense of timing by director Alejandro Innaritu, who deserves all the praise I can give him. Methodical, passionate, often aloof, occasionally trance-like, Birdman is one of the great film experiences of our time, maybe of all time. I won’t waste time on meaningless platitudes, or trying to spoil a film so weirdly blessed with an overabundance of brilliant moments by explaining subtext or motive; if you love film, you need to witness the majesty of this movie. Just see it, embrace the wonder, and look to the sky. Birdman truly soars.