Director : Damien Chazelle
Year Of Release :   2014
Principal Cast:  JK Simmons, Miles Teller, Paul Reiser, Melissa Benoist, Austin Stowell, Jayson Blair, Kativa Patil, Michael Cohen.
Approx Running Time :  102 Minutes
Synopsis:   A young music student attends a prestigious school of music, under the tutelage of a fearsome maestro who drives him to the edge of madness.
What we think :  Whiplash does for music school what Full Metal Jacket did for war. Stunning lead performances, particularly from JK Simmons, as the furious conductor of a Jazz Band, make this a mesmerizing, provoking and effortlessly classy film about power, art, and rhythm. Dynamite in almost every respect.

I’m not a fan of jazz. Music, that is. Jazz music. Not the “all that jazz” from Chicago, but legitimate Jazz music. I don’t understand it, I lack the cognitive ability to associate with it as anything other than an un-melodic stream of random notes and beats, cohesing into some kind of “standard” for which musicians strive to achieve with perfection. Perhaps I lack refinement? Does this make me a “coarse” musical appreciator? Probably, but if I dislike the form of jazz as a genre of music, to say that Whiplash, which is the personification of jazz as an artform, is one of the best films of 2014, you know a troglodyte such as myself really means it. After all, I have no vested interest in the form. Whiplash is dynamite, a cinematic firecracker that overcomes restraint with belligerent swagger; led by a wonderful Miles Teller, and a searing, career-making performance from JK Simmons, Whiplash is essential 2014 cinematic viewing. Easily a top 5 contender. Dammit, I still don’t love jazz, but I did love this film. 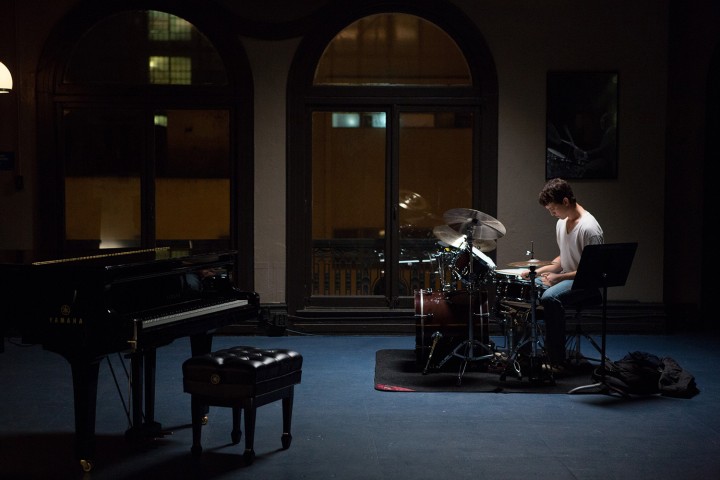 Andrew Neiman (Miles Teller) is a jazz drummer, attending the prestigious Schaffer Conservatory of Music, in Jazz, and is taken under the tutelage of infamous maestro and taskmaster, Terence Fletcher (JK Simmons). Fletcher appears kindly and becoming to Andrew at first, but displays bursts of anger, frustration and condescension towards his pupils as they try to accomplish his extraordinary level of perfection for the school band. After meeting Nicole (Glee’s Melissa Benoist) and then dumping her after realizing his passion for music, Andrew and Fletcher square off over several competitive concerts, one of which Andrew eventually succumbs to the pressure and is removed from Fletcher’s class. He spends time in an apartment, and more time with his caring father (Paul Reiser), who sees Fletcher as a black mark on Andrew’s life.  Yet, the biggest test is to come, when Fletcher invites him to perform at a jazz festival, as part of the opening act. Old tensions may just ignite, as Andrew and Fletcher once again butt heads. 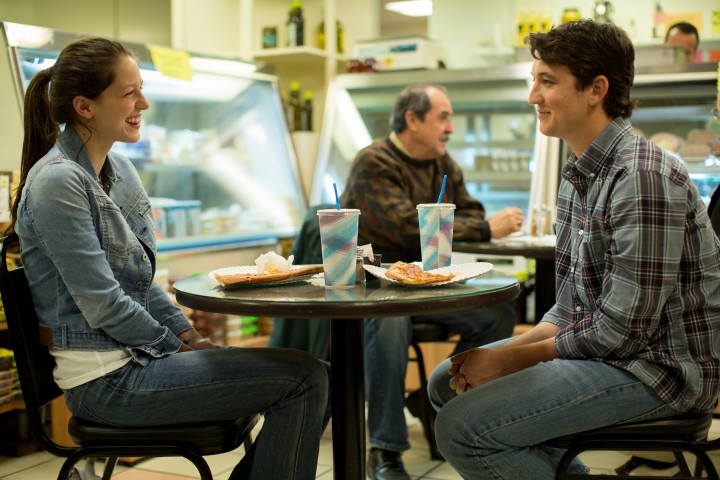 You’re a drummer? Well, it could be worse. You could be a bass player!

My opening rant about jazz shouldn’t be an indication as to what this film’s prime narrative arc is about. Whiplash isn’t a film about jazz, at least not from a character perspective. Jazz is merely the medium in which Teller’s Andrew, and JK Simmons’ Fletcher work; Whiplash’s dynamic interplay between the two is pure gold, a mesmerizing roundabout of grandiosity, arrogance, underhand thrills and vendetta-laden “gotcha”. Jazz is simply a platform with which to elevate this superb character piece about two personalities who simply will. not. give. in. You don’t need to like jazz, understand it or even really know about it – watching Teller and Simmons go at it for nearly two hours as they try to one-up each other (Simmons wins performance wise, in a TKO) is one of the most astonishing displays of acting partisanship I’ve ever seen. 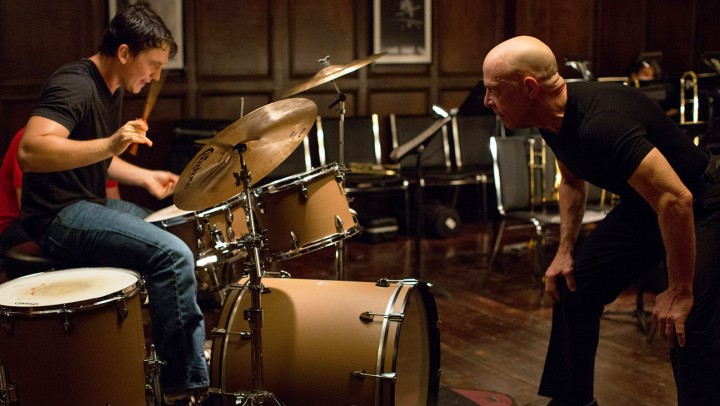 You stop and you’re a dead man, sonny boy.

No, Whiplash is about art. What makes it, what it takes to make it, and what some people will do for it. It could be a film about pottery, this film would still be riveting, thanks to the lead actors. The plot isn’t a new one, not really: young hopeful encounters a brutal teacher who pushes him further than he ever dare go, in order to be the best, “one of the greats”, and the dynamic interplay between them. But it’s the characters, and the actors, who make this film what it is. 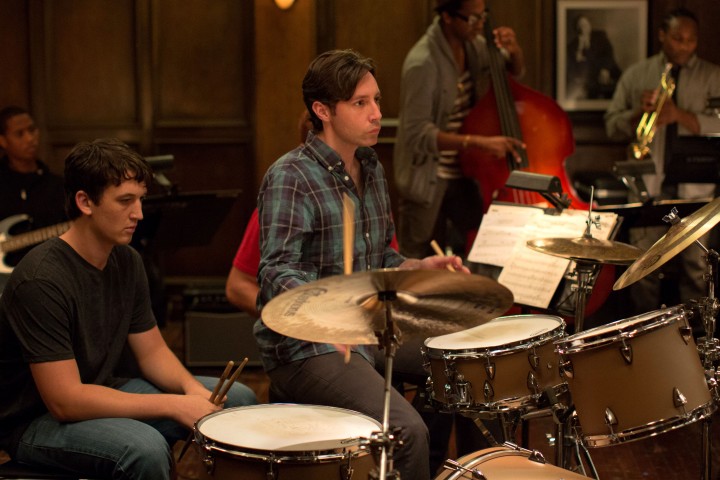 There’s a bomb on a drum. Once the drum is struck, the bomb is armed. If you stop drumming, the bomb goes off.

Simmons, as Fletcher, commands the screen: he always has – ever since he stole Sam Raimi’s Spider-Man as J Jonah Jameson out from under us all, I’ve admired his work, as underrated as it often is – and here, well, this is Oscar caliber material for sure. Simmons is an animal, an inhuman, vestigial sub-creature of darkness and determination, desperate to strip bare Andrew’s “good job” mentality and turn it into one of “not good enough, do better“. He rants, he cajoles, he insults and altercates with his students, a rampaging bull of a man who has zero time for equivocation or weakness. “Are you one of those single-tear people?” he questions Andrew at one point, early in the film. His blistering attacks on Andrew’s personality, often throwing back the fact that Andrew’s mother is no longer around right to his face to provoke a reaction, are cruel, yet, in many ways, tinged with vulgar purpose: without Fletcher’s constant condemnation, would Andrew become the drummer he wants to be?

With Simmons commandeering the film to such a degree, his co-star needs to deliver a performance worthy of sustaining the animosity and chemistry. Miles Teller, better known from his appearance in the Footloose remake, as well as the tepid Divergent franchise, is up to the task: he’s the near-equal of Simmons’ wide-eyed ferocity, delivering a performance that not only undermines Fletcher’s pompous bastardry, but makes it seem like Andrew has a bit of bastard in him too. Andrew isn’t a “musical prodigy” clone, he’s got problems and feelings of his own, and the film highlights this often enough to give him depth and an emotional journey, instead of just becoming Simmons’ punching-bag. Teller’s Andrew is initially unsure of himself – his flirtation with a relationship with Nicole is humorous, and his eventual dumping of her is logically sound (although quite harsh, as well), but it paints him as somebody seeking a purpose and a facilitator to become a great drummer. Fletcher is that facilitator, no matter how brutal, uncompromising and horrifying he can be. Inevitably, Whiplash is a question of how far Andrew will let himself be pushed to achieve his end-game. 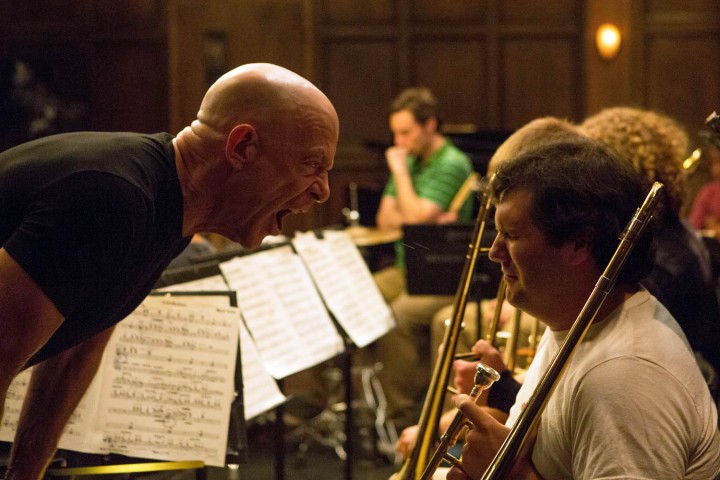 I’m telling you, the McDonald’s slogan should be “I’m Shovelin’ it!”

Director Damien Chazelle handles this film with an assured sense of pace and tone. Chazelle has credits mainly as a screenwriter, including The Last Exorcism Part II (dude, really?) and Grand Piano (ahh, that’s a little better), and Whiplash marks his second major feature as helmer, following Guy And Madeline On A Park Bench. This story is obviously his love letter, his passion piece, and it shows in every frame. His edits are rhythmic, often with the overlaid soundtrack, accompanied by the frantic rat-tat-tat of the kick-drum or snare as a scene builds to explosive tension. And Whiplash is tense. The combative moments between Teller and Simmons are burdened with purpose, a glorious purpose, as Loki might say. The film’s smooth camerawork during the less explosive moments are merely the prelude to the teeth-grinding tension of watching Teller try desperately to accomplish what Simmons continues to demand of him. It’s blazing cinema, marked by the inclusion of some truly remarkable musical instrumentation. 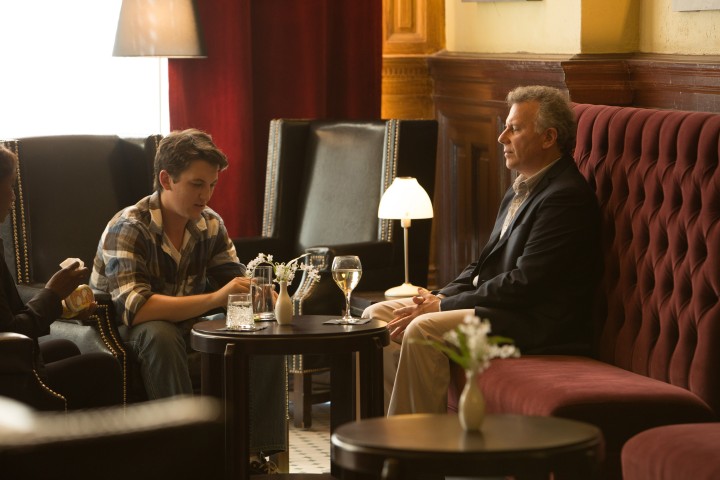 It makes little difference to me, I used to be a sitcom star.

And, for a non-lover of jazz, this film’s soundtrack is dynamite. Perhaps it’s because of the story behind much of what we hear, and the characters involved in the playing of it, but Whiplash’s jazz-bonanza score is perfectly attuned to the ebbs and flows of this story. The titular track, “Whiplash” by Hank Levy, isn’t the kind of track I expected (I expected something less percussive, more brassy), but “Caravan”, which is used a couple of times through the film – and particularly right at the end – is truly memorable. Whiplash might be the film that converts me to enjoying….. ahh, who am I kidding, it won’t convert me to enjoying jazz, but as a musical motif and as a technical skill, the film’s orchestrations and performance are exceptional. 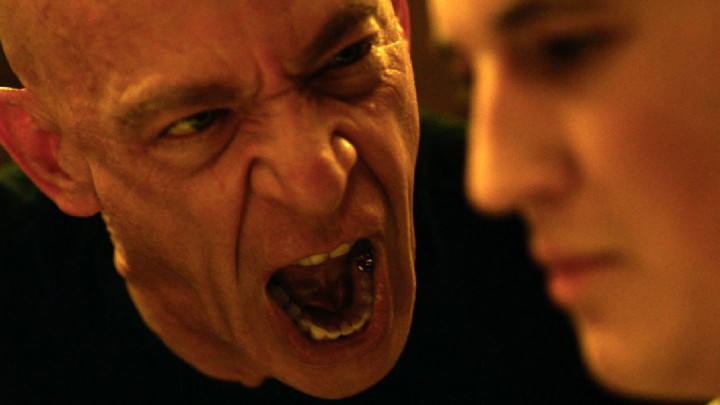 And this is my impression of Bilbo when he tries to take the ring back from Frodo.

I said in my nutshell reaction at the top that I felt Whiplash will do for music schools what Stanley Kubrick’s Full Metal Jacket did for war, or specifically the dehumanization of our soldiers to kill, kill, kill. Appropriating a character eerily similar to R Lee Ermey’s Gunnery Sergeant Hartman, Fletcher’s dehumanization of Andrew to push him to be a better musician is palpably visceral, a sweaty, bloody, thunderous journey into musical madness that will make you cheer for both the good guy and the bad guy in equal measure. Fletcher is an asshole, yes. Andrew isn’t far off it either (he isn’t afraid to use a dirty trick or two to gain an advantage). But together? Man, they make beautiful music. Whiplash is fantastic.