Your mission, should you choose to accept it…..

I want to take you on a journey. A journey back into the mid-90’s, to a time when not ever film was a remake, reboot, sequel or imitator. The idea of bringing old TV shows to the big screen was still in its infancy, to the point where it could be argued that Tom Cruise’s production of Mission: Impossible, directed by Brian DePalma, was the jump-off point for Hollywood to start mining the small screen for ideas. The world was simpler then too – before 9/11 and the War On Terror, all cinema had to worry about with its spies was whether they’d prevent a nuclear explosion in the former Soviet Union, or if the Queen had her crown jewels stolen. That was about it. The brain-bending concept of a Mission: Impossible movie had all the hallmarks of Hollywood trying to create their own James Bond, a sophisticated, technologically adept super spy who cracks cases and undertakes missions that nobody else (without tights and a cape, anyway) would even consider. Enter Tom Cruise, in pre-couch-jumping popularity, married to Nicole Kidman, and who came to this project off the success of roles in hits like A Few Good Men, The Firm, and Interview With A Vampire only a few years prior. The thought of Tom Cruise as an uber-spy wasn’t exactly scoffed at (back then), and the film’s potential was solidified by the addition of a number of big name casting decisions, particularly Jon Voight (father of Angelina Jolie), Jean Reno (The Professional) and Kristen Scott-Thomas (The English Patient). With DePalma directing, would Mission: Impossible stack up to the task of retooling the classic television series for a new audience, or would it…. ahem, self destruct in five seconds?

Charades at Benny’s place was filled with tension.

Ethan Hunt (Tom Cruise) is a member of an elite team of operatives, under the purview of the Impossible Missions Force (IMF). On a mission in Prague, Hunt and his team, led by Jim Phelps (Jon Voight) are wiped out, leaving only Hunt to report back to agency director Kittridge (Henry Czerny). When Hunt learns that Kittridge believes him to be the mole who gave away the highly valuable NOC List (Non-Official Cover), a set of names for all the aliases used by spies across the European continent, Ethan escapes custody to uncover the real traitor within the ranks. After Phelp’s wife (Emmanuelle Beat) appears on the scene, both she and Hunt, together with two former IMF agents in Luther Stickell (Ving Rhames) and Franz Kreiger (Jean Reno), infiltrate the CIA in Langley, Virginia, to gather intel on the case. This leads them to Max (Vanessa Redgrave), an arm dealer who might be interested in the NOC list for her own selfish purposes. 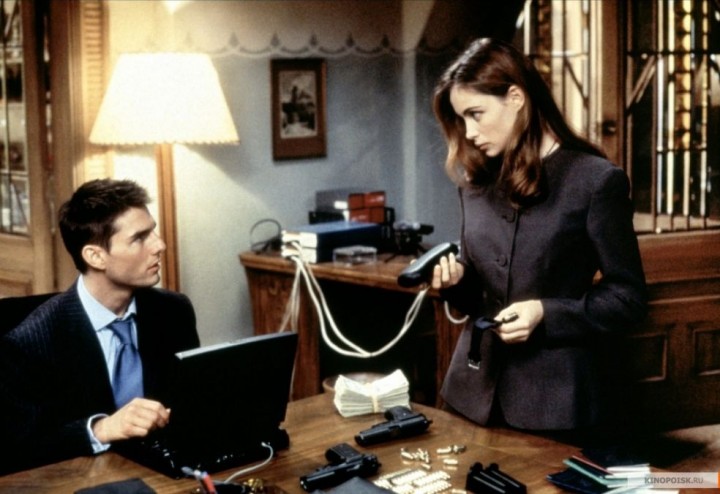 Let’s face it: the moment you hear Lalo Schifrin’s classic theme tune, in thunderous 5.1 audio, you’re hooked. There’s very few truly iconic theme tunes around these days, and aside from the James Bond theme, and perhaps a few others, the Mission: Impossible motif is instantly recognizable. Although I’m generationally and geographically challenged with my appreciation for the original television series (never seen it, to be honest, thanks to regional South Australia being as far from the spy show’s broadcast footprint as possible), the idea of the franchise is simplicity itself. The old “your mission, Jim, should you choose to accept it” had become pop-culture shorthand for sleuthing, stealthy, spy-game subterfuge, and the perception that the team of IMF agents were “ghosts” in modern world events was a strong notion both visually and narratively. 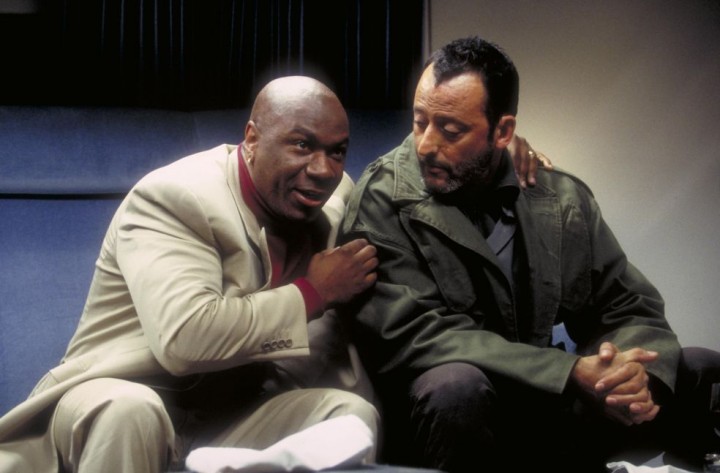 …and then guy said to him, “Bad luck Frenchy, you’re still gonna have to die!”… man, that was a script reading to be at!

Tom Cruise was the driving force behind the film’s inception, with his producing deal with Paramount allowing him some sway over projects he courted. As producer, he steered this ship onto the big screen, giving Brian DePalma a run behind the camera directing, which Cruise himself starred as Ethan Hunt, the (now) eponymous hero of the piece. History will record the film being a huge box-office success, even in spite of (now public) controversies and production problems which could have easily sunk this project before it began. Script issues seem to be the main issue, as rewrites and screenplay massaging (from David Koepp through to Steve Zallian and Robert Towne) prevented the film’s principal photography schedule from going ahead with a completed script! Shooting a film without a locked script is hazardous at best, and cinematic doomsday at worst. Thankfully, DePalma and Cruise got the film they wanted, and the audiences got the films they’d hoped for. 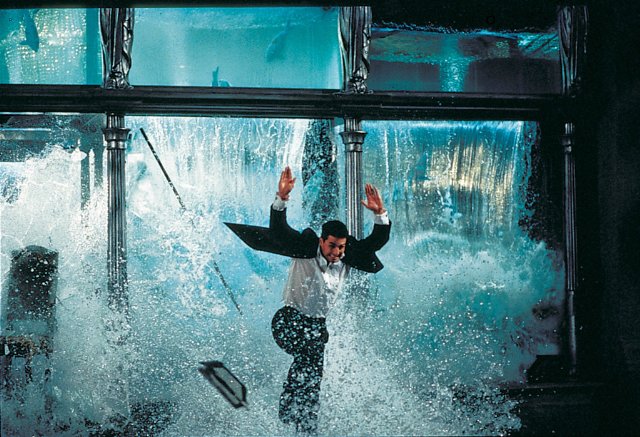 Mission: Impossible is, at times, a labyrinth of plot and deception. Sometimes, it’s a tad too complicated for its own good, although thanks to the presence of Cruise and his star-studded co-stars, much of the film’s MacGuffin-centric premise is smothered in professional clap-trappery, and slides down easily. The opening sequence, set in Prague, sees the major headline acts killed off early in the film – which, when you think about it, is something shocking compared to most major films these days – leaving the bulk of the film to hang on the shoulders of Cruise, his bosses wife in Emmanuelle Beart (who I majorly crushed on back in the day, let me tell you), and the relatively low-key Jean Reno and Ving Rhames. Rhames was still basking in the popularity of his role in Tarantino’s Pulp Fiction, which had released two years prior, and the subculture of fans who knew of Luc Besson’s The Professional no doubt lapped up the presence of French actor Reno; Mission: Impossible became a showboat moment for Cruise, and he made it work. 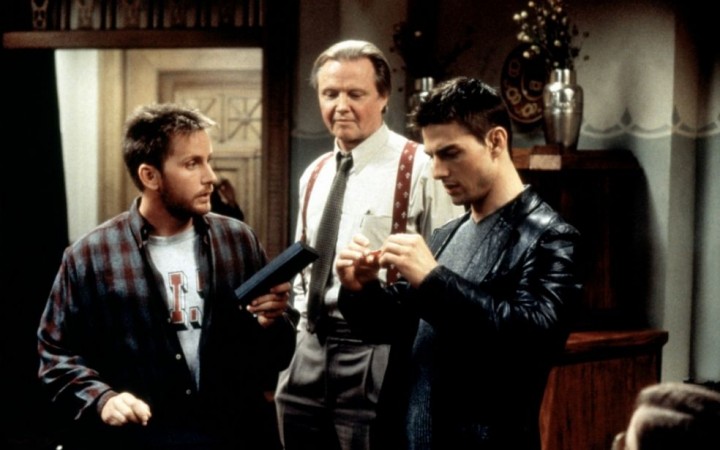 Once again, John’s limited knowledge of the internet came back to haunt him.

DePalma’s direction is typically subdued where required, although sliding into bombast (particularly during the climactic bullet-train chase sequence) when required. The film’s tone is one of repressed anger, almost a hidden fury within the frames of this film, as Ethan must seek a kind-of revenge for the deaths of his team early in the story. As blind corners and red herrings abound, DePalma smothers the film in ratcheting tension, as Hunt gets closer, closer, closer to uncovering the truth. Audiences at the time (me included) gasped at the plot twist involving IMF agent Jim Phelps, and it is a matter of public record that many of the stars of the original television series weren’t happy at all with the way the franchise was handled by the production. Yet, in spite of that, the film is still terrific. By rights, it shouldn’t have been, but it is. 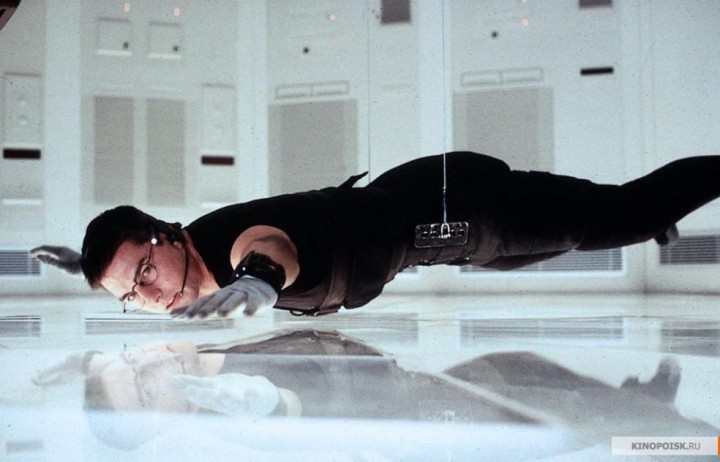 Hanging by a thread!

Easily the most memorable sequence from the film is the infiltration of the CIA headquarters, involving Cruise dangling from the ceiling by a wire, trying access a highly sensitive computer, with sweat dripping from his glasses. Terrifically mounted, tense and exciting, this entire sequence is worth the entry price alone. Yet the film is more than that – the opening Prague sequence drips with nuance and wit, moments of pure character layered around this mysterious NOC list. The dynamic between Beart and Cruise, as Hunt and Claire Phelps, is palpable, and worthy of its own movie. The addition of Vanessa Redgrave’s salacious Max, who feels more like some female sex-predator than a dangerous dealer of arms, is also a highlight. And the gob-smacking finale, set aboard a speeding bullet-train and pursued by a helicopter, is pure dynamite. DePalma handles every moment with skill and ease, keeping the l0w-down tone of the spy-work throbbing along even as the film lurches into its “action scene” moments. 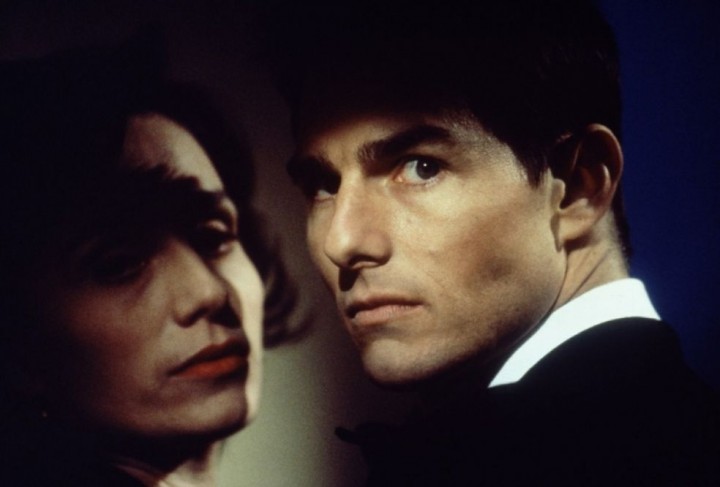 It’s all sexy over here.

Mission: Impossible is a great film. Sure, it’s a bit dated through it’s visual effects and political fascia by today’s standards, but it holds up as an iconic, defining moment in Tom Cruise’s career. While he’s had better roles, and the franchise as a whole would improve (in spite of MI2), there’s no denying that this film delivers all the shocks, excitement and thrills you could want in a genre film like this. Crank up the DVD (or BluRay) and settle back and enjoy.