Director :  Phillip Noyce
Year Of Release :   2014
Principal Cast :  Brenton Thwaites, Jeff Bridges, Meryl Streep, Alexander Skarsgard, Odeya Rush, Katie Holmes, Taylor Swift, Cameron Monaghan, Emma Tremblay.
Approx Running Time :   97 Minutes
Synopsis:  In a future utopian world, humans have evolved to exist without emotion, leaving their lives completely uniform. One young man is chosen to receive the memories of their past, filled with love, hate, anger and beauty, from the man he comes to know as the Giver.
What we think :  Inordinately indifferent, but certainly well made, The Giver sees yet another Young Adult genre story given the big-screen treatment – for better or worse – and although it tries hard, delivers a few moments of genuine shock, and offers some nice subtext about modern society, the film fumbles its core premise. While it’s no Hunger Games, or Twilight (blessedly), The Giver’s impoverished story lacks true substance, a skeletal effort that renders much of its potency inert.

Not a gift you want.

Aussie actor Brenton Thwaites’ year in 2014 has certainly been a breakout one for the young star. A former soap actor, Thwaites’ career has blossomed with appearances in not only this, The Giver, but also independent sci-fi looper The Signal, opposite Laurence Fishburne, as well as big budget Disney opus Maleficent (playing Prince Phillip), and Oculus, opposite former Doctor Who star Karen Gillan. Thwaites stretches his name-dropping bank by now appearing opposite both the Dude himself, Jeff Bridges, and Meryl Streep, easily the greatest actress of this generation. Not bad for a lad from Australia, whose main claim to fame was a tiny weekday soap opera called Home & Away. While I’m loathe to call The Giver Thwaites’ breakout film – I think that title belongs to The Signal, a film you really should check out – this one is perhaps his most mainstream leading role to date, and one that calls into question his ability to actually shoulder a major studio film such as this. Is The Giver a gift to audiences, or is it something we should keep the receipt for, and return to the store as soon as possible? 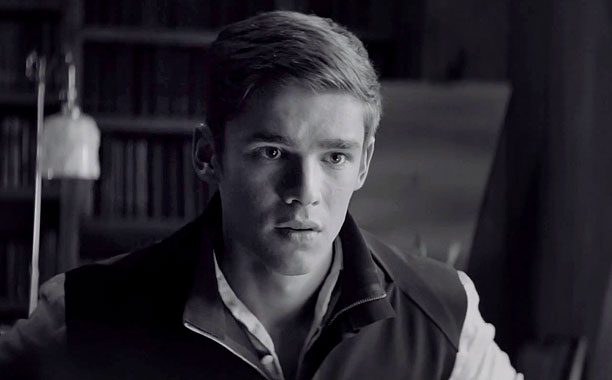 In the future, after an event known as “the fall”, humanity has set itself up into an enormous “colony”, a utopian lifestyle free from emotion, color or any kind of difference. This “sameness” has had generational influence through the colony, leading to a regimented, unquestionably bland life lived out with no excitement, love or happiness. People simply exist; however, within the colony is a person known as the keeper of memories – everyone has had their memories of the past erased, with the exception of the keeper – who must pass on to one soul these precious moments of intangible thought. The Giver (Jeff Bridges), finds himself meeting young Jonas (Brenton Thwaites), the chosen one to receive the memories, a process which takes time, and allows Jonas to experience all the emotions, thoughts and feelings long since suppressed by the Chief Elder (Meryl Streep). Jonas’s family unit, Father (Alexander Skarsgard), Mother (Katie Holmes), and Sister (Emma Tremblay), take in an apparently “unsuitable” infant, Gabriel, who Jonas learns is to follow him as a future Receiver of Memory. As Jonas learns about humanity’s past, he discovers that the life they’re all living now is horribly stifling, lacking in even the most basic emotional qualities – he falls in love with his best friend, Fiona (Odeya Rush), and has minor conflict with another friend, Asher (Cameron Monaghan) – and sets about trying to dismantle an oppressive, murderous state that appears in every way anathema to human existence. 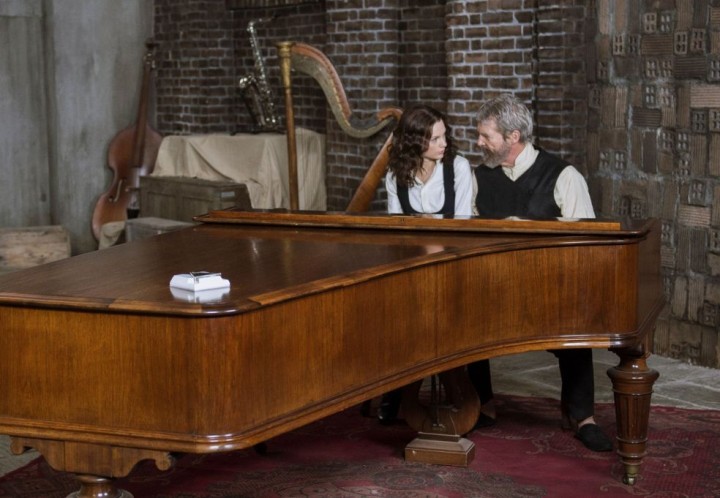 A few minutes later, she’d be playing a concerto…

Reading the synopsis of The Giver, there’s little within it that makes me do anything other than yawn. We’ve seen it all before: the utopian-yet-creepy society, the complicit human adults willing to maintain the status quo, the chink of weakness within the perfectly manicured society, and a “chosen one” able to exploit it at considerably cost. Arguably one of the earlier versions of the modern context for this genre, The Giver (based on a 1993 novel by Lois Lowry) spews up more of the same kind of simplistic, cookie-cutter “sci-fi” that makes adults weep and adolescents think they’re smarter than they actually are. Although I’m unfamiliar with the original text, one can only assume it’s been thoroughly disemboweled to bring this saccharine, bloodless, tension-free effort to the screen with maximum focus-group-possibility, a sure-fire way to hobble the very premise of the film itself. 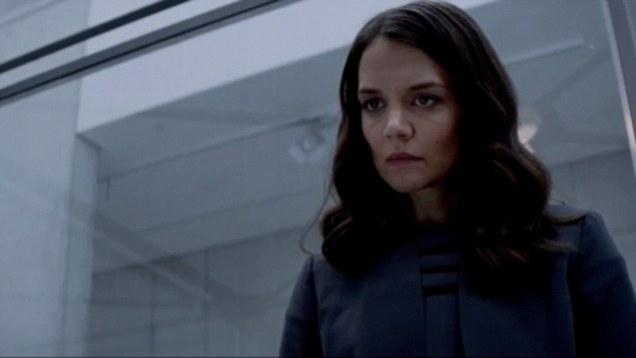 As if I spent all those years married to the Mad Cruise and all I get are films like this?

Where films such as The Giver, Divergent, The Host and even The Mortal Instruments fail to succeed as movies is that they render themselves impotent through a committee-led expunging of the depth, intricacy and complexity teens demand, yet film studios seem to think is unnecessary for a successful, quality story. Perhaps if studios gave their audience the benefit of having a modicum of intelligence, dullard film such as The Giver might actually be a lot more.. you know, fun. Or entertaining. Even engaging! God forbid kids actually use their brains every so often. The Giver’s screenplay feels like a highlight reel from the actual novel, a choice selection of the more memorable moments of Lowry’s book that make an easy transition to the screen without offering anything with value. It’s a confusing gabble of ideas, stung together with the slick veneer of Hollywood money, which never tests the audience’s ability to understand, only to accept and move on. 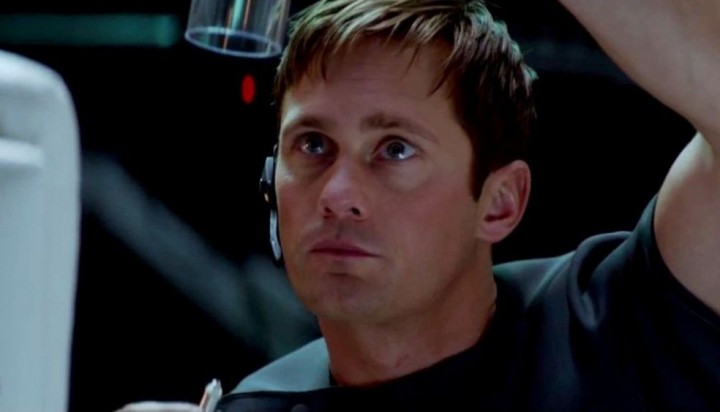 You want me to fill….. a bottomless cup?

The Giver’s central premise, that of the removal of emotion, color and life from humanity, isn’t new. Nor is it given (ha) any new life in this film. In what appears to be a giant Ikea commercial, The Giver’s story meanders through a subroutine of classic genre archetypes – led by the eerie Mery Streep in full “societal overlord” role – without adding anything new to it. Brenton Thwaites’ Jonas, the central character, is as bland as they come, an unblemished avatar of human decency and curiosity to whom the truth about the “real” world is revealed, and on whose somewhat thin shoulders this film hangs. While Thwaites is a competent dramatic actor (his turn in The Signal testifies to that) he’s let down by a scrip that’s little more than a clip show of our world – images of weddings, parties, love, excitement, beauty, laughter and all things good pepper the latter half of the film as Jonas comes to realize what their lives have all been missing – and while his reaction to it is believable, his character never earns our empathy to justify his decisions. Jonas’ desire to “escape” his world with tiny Gabriel, who is scheduled for “release” (read: execution) comes out of nowhere, as does the films bizarrely anticlimactic “end zone”, where Jonas must reach in order to “release the memories” and return everyone to being actually normal again. 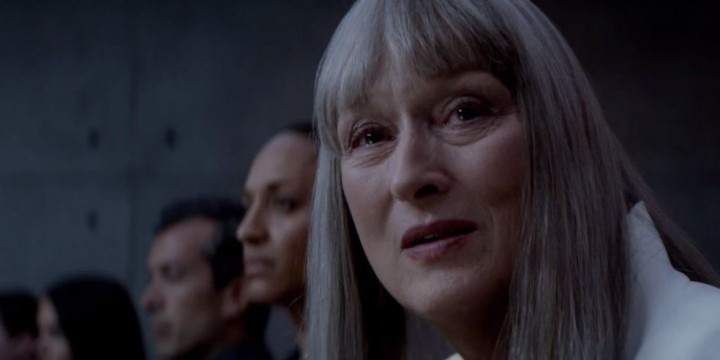 Truth be told, the film’s opening act sets things up really well, and for a while I was actually engaged with the story to find out what it would offer, but by the mid-point, when Jeff Bridges’ Giver starts to ramble on about stuff we all know about (like love, hate, war and anger), I started to get a little bored. The film’s lumbering pace, mixed with a fairly bland world design (it looks like some kind of Star Trek castoff), and a series of characters who, through the very core of the story have no depth or nuance whatsoever, combine to create something so antiseptic, so free from raggedy edges, it’s hard to really get “into”. Key to the “emotion” aspect of the film is its opening twenty minutes, which play out in black and white, before gradually, Pleasantville-style, switching to color. It’s a nice conceit, but one that lacks explanation… well, enough explanation to convince me, although lesser minds might not notice the gaping black hole of plot this leaves in the way. 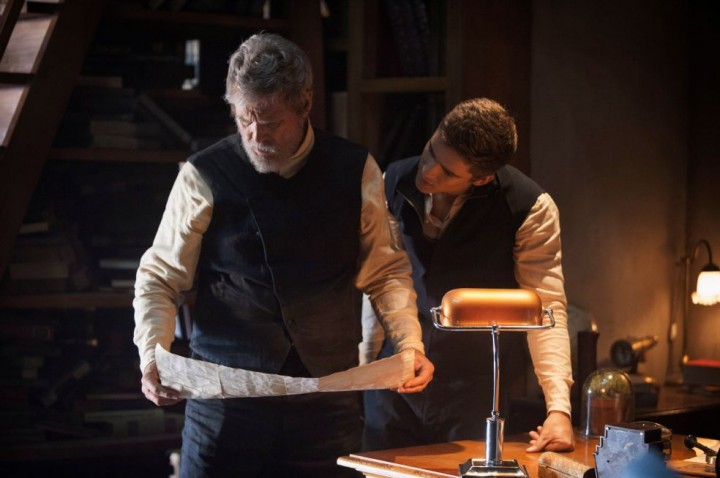 I tell you Marty, if you don’t reach 88 mph by the time you hit this mark, you’re cooked.

The film is directed by the equally competent Phillip Noyce (The Saint, Patriot Games, Rabbit-Proof Fence, Salt, Dead Calm), who brings a steadiness to the movie that perhaps was the wrong choice. This film needed energy, a momentum sadly missing as we spend inordinate amounts of time with Jonas and the Giver in hallucinatory memory transfer and repercussive emotional outbursts. The final action-y moments, with Jonas’ friend Asher hunting him down with a drone aircraft, are as tense as this film gets, and even when Jonas stands pleading with Asher to give him a chance, you know the outcome well before it ever eventuates. Noyce can’t really give us a film that sings with any truth, in as much as he handles this genre well it’s not revolutionary or compulsive viewing. He tries hard, but he can’t elevate the material. 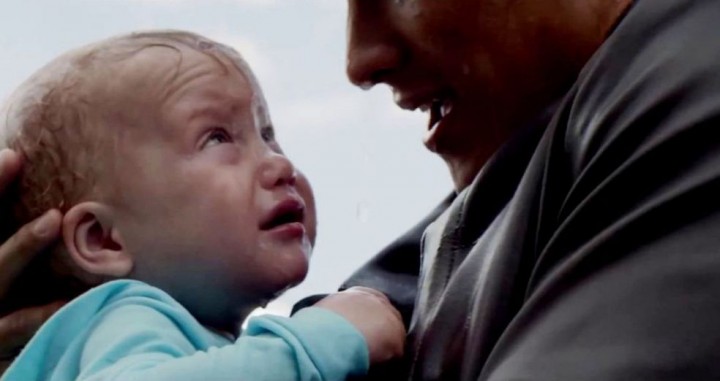 Hey look, it IS Benjamin Button!

If The Giver proves anything, it’s that films without emotion are tricky ones to pull off. Thwaites and Bridges are the only two people within the film to whom we have any attachment, because they’re the only characters with emotion or depth. Bridges mugs his way through the film like he’s having a stroke, Thwaites is earnest but unconvincing opposite the beautiful Odeya Rush, while Katie Holmes, Alexander Skarsgard and Mery Streep spend the entire film looking like they’ve just spent a week staring at a blank wall. The lack of emotion and feeling within the film might seem like a clever meta-twist for the audience, but instead of enhancing the film’s moments with emotion, it only makes us long for a film with more of it. 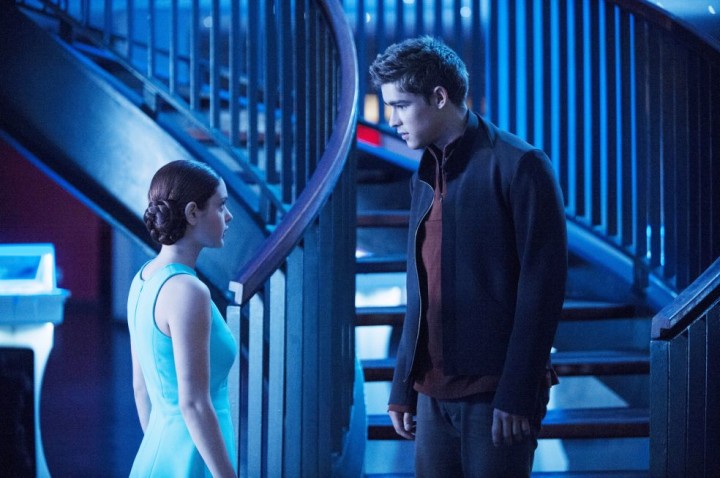 You’re hot, but this staircase is even hotter.

The Giver’s premise isn’t new, nor are the characters within it. Come to think of it, there’s very little about this film that can’t be referenced in about a hundred other films of similar concept. While the cast and crew might have bought into the idea of a world free from emotion, and all the wrong-headedness that entails, the audience (that’s us) never gets the chance, with a script that mishandles the ideas and totally drops the ball in serving the characters. The Giver feels like it’s been focus-grouped to death. If we’re going to give this film anything, it’s about four stars.