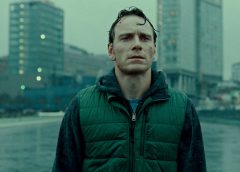 Director :   Steve McQueen
Year Of Release :   2011
Principal Cast :  Michael Fassbender, Carey Mulligan, James Badge Dale, Nicole Beharie, Lucy Walters, Alex Manette.
Approx Running Time :  101 Minutes
Synopsis:  A New York advertising executive with an addiction to pornography finds relationships problematic – through work, his sister, even casually – and this emotional issue threatens to derail his life.
What we think :  Michael Fassbender’s searing performance in Shame is career-defining. The film’s plot is handled with a rawness and pin-point focus by director McQueen, and the movie does make for largely uncomfortable viewing, but folks looking for something more intellectually stimulating than a cookie-cutter actioner would be well served with this one.

Addiction has oft been a central theme in film, from the very early days of silent cinema, to the modern dramatic Oscar-bait releases, and Shame is no different; it’s a film dealing with one man’s desperate addiction to pornography and casual, emotionless sex. While I have been known to scoff derisively at those who claim a “sex addiction”, as if wanting more and more sex could ever be a bad thing, Shame does something that I found incredible on a personal level: it made sex addiction real and inescapable, and made me ask myself the questions of whether I had, at any point, been in a similar situation to Michael Fassbender’s central character. Shame’s core premise is that Brandon (Fassbender) is so needing of sex and release, that he ironically cannot make any lasting and deep connections with another human being, not even his equally addicted sister. Tacking such a subject required Fassbender to bare his soul (as well as his body) for McQueen’s rock-solid camera, and the end result is a film that makes one understand how the form of addiction told in this story is not only real, but a debilitating and, on a societal level, shameful one.

Brandon (Michael Fassbender) is a successful New York advertising executive, who lives a reclusive and emotionally distant life from anyone, including his sister Sissy (Carey Mulligan). Brandon’s boss, David (James Badge Dale) sees Brandon as something of a “player”, taking him to bars as a wingman to pick up random women with which to sleep. Brandon, unbeknownst to everyone, has a secret sex addiction, leading to him masturbating in the bathroom stalls at work, engaging in internet pornography (as well as porn of both video and magazine kind) and – in a frank admission – having no relationship lasting longer than 3 or four months. After the married David hooks up with Sissy, David begins to become more and more isolated; his relationship with a female co-worker, Marianne (Nicole Beharie) ends in Brandon’s failure to… rise to the occasion, and he ends up having promiscuous sex with a prostitute, before entering a gay bar and experimenting with sexual release that way. Concurrently to this, Sissy’s fragile emotional state leads her to an act that will force Brandon to confront his feelings for her, bringing to a head months and years of pent up frustration at his inability to form lasting bonds with other people.

Shame is nothing if not confronting. There are no boundaries here that are not pushed, stretched, and – in some cases – broken completely. Although the film contains plenty of nudity, there’s no “sexiness” to it, no allure in watching Fassbender’s casual humping of random women; in fact, it’s quite the opposite, really. Steve McQueen’s raw, intense focus on the characters (most of whom lack a lot of backstory, existing almost entirely in “the now”) and his laser-like camerawork refuses to pull away, refuses to ignore the icky nature of humanity told in this narrative, and Shame’s uncompromising integrity in this respect is definitive. McQueen lifts the infested, grimy skin off this blister, intent on examining how an addiction to the most intimate of acts and behavior has led to the polar opposite feelings in a man. Sexual addiction has left Brandon with an emptiness inside, an emptiness that – as this film might suggest – cannot be fulfilled. As Brandon hops from one woman to another (or, to a man at times) one gets the aching sense that he will never be satisfied, until he can release himself from the hold sex has on his life. It’s a brutal, often alienating experience to watch, although both McQueen’s direction and Fassbender’s scorching performance make this an absolute masterpiece of drama.

As Brandon’s life begins to spiral further and further out of control, and as his relationship with his sister becomes more fragmented and isolated, Shame turns into a dark, dank place to be. Not even the radiant light of Marianne, a co-worker of Brandon’s, can shear away the depraved thoughts and desires Brandon has, leading to a complete breakdown on the streets of New York. Subtext has never been my strong-suit, but even I managed to pick up on the fact that Brandon’s emotional isolation could be analogous to the proximity isolation to the inhabitants of New York City. After all, in a city of millions, does anyone really know anyone else? The film never opts for resolution, never goes for explanation; it simply presents itself as a canvas on which these characters slither, allowing us to pass judgement but never trying to sway us with editorializing the situation. Either you find yourself understanding these people, or not. Are they a product of our times, are they disgusting humans who have no place in society, or are they simply human? Shame makes no judgement, allowing us to draw our own conclusions. I suspect everyone will have a vastly different opinion.

The film’s strength is undoubtedly Micheal Fassbender, as Brandon. His raw performance is searing at times, comfortable at others, and eerily smooth when required. A final menage-a-trios sequence, where Brandon is trying to rid his lust and desires through casual sex with women, is heartbreaking (and I don’t think I’ve ever described a sex scene as heartbreaking!) and it’s Fassbender’s performance that drives it. Fassbender says more with a single look and glance than many actors could muster with a hundred pages of dialogue, and Shame’s a shining light of the man’s talent. To say he’s exquisite in this film is an understatement. He’s ably backed up by a radiant Carey Mulligan, who gives more of herself in this film than I’ve seen throughout most of her career this far, and a scene with her and Fassbender right at the very end of the film, with her needing hospitalization, is acutely powerful for what isn’t heard, rather than what is. James Badge Dale’s role as Brandon’s boss is solid yet unremarkable, while Nicole Beharie’s performance as Marianne is terrifically real.

Shame isn’t a film you can enter into lightly. Like Requiem For A Dream or Trainspotting, it’s a film about addiction that will stay with you long after the credits have rolled. Whether you draw anything from the film, be it disgust, boredom or complete bewilderment, is perhaps the key to your “enjoyment” of Shame, but as a work of art that elicits a response, there is no question it’s one of the better examples of the medium. On a personal level, it opened my eyes to a subject I initially dismissed as a silly, made-up problem, but having witnessed Shame’s terrifying premise and the ease with which Brandon slipped into this addiction, I can say that I will scoff no longer. Shame is brilliant film-making, featuring a career-making role for Fassbender, and delivers a solid, scorching portrayal of modern sexuality that should be on everyone’s watch-list.