Okay, get the obvious out of the way first. There’s a film called Battleship, it’s directed by Peter Berg, and it’s truly one of the most horrible films you’ll ever see – at least as far as little things like story, character and logic go. However, if you enjoy special effects and a thunderous soundtrack, then this is probably the film for you. When I went to see Battleship in cinemas, I actually kinda enjoyed it, at least for the 2 hours of vacuous, incoherent storytelling it involved, and the insipidly obvious US military propaganda machine it tried very hard to hide behind a wall of technically proficient visual effects. While the film didn’t made sense from a realistic or even vaguely fantastic perspective, from a “let’s blow stuff up big and good” slant, Battleship ticks all the boxes for lowbrow, beer-swilling entertainment. I won’t sugar-coat this turd, folks. Battleship isn’t high art, and has been labelled as one of the worst film to come out of the Hollywood machine in… well, a long time. I’m hard pressed to disagree with those sentiments, so approaching the Blu-Ray review of this film is one in which I’m prepared to swallow some pride and admit to enjoying from a simple, audio-system-testing time-waster point of view. Read any serious critic’s review of this film and they’ll do all my recommendations for me. Today, though, I’m here to discuss the technical undertakings of Universal’s HD disc release of the movie – whether you enjoyed it, or not.

Like all major Hollywood releases, especially those with budgets larger than the current net worth of Facebook, the sound and picture on these films is inevitably critic-proof. Battleship is largely no exception. The film’s image quality is filled with action, zipping camerawork and plenty (I mean it, plenty) of visual effects, so it really does put your HD monitor (and the bit-rate on this disc) to the test. Battleship assaults your visual senses with a crackerjack presentation, keeping the original theatrical 2.40:1 aspect intact. Colors are saturated exceptionally well, and I noticed no compression issues whatsoever – although, had there been any, I’d probably not notice them thanks to the frenetic camerawork and astonishingly realistic visual effects.Banding and ringing, usually the first things to crop up when a film is transferred to an optical format with compression involved, is absent, with every frame of this beast as razor sharp as the one before it. The lens flare used by director … sorry, Peter Berg is reminiscent of the same style JJ Abrams used on his Star Trek reboot, although this presents the presentation with no obvious problems. Black levels are spot-on, with no crush problems presenting themselves – skin tones and general color presentation is exemplary, although it does push towards the red end of the spectrum; this would be an aesthetic look by design, rather than a problem with the telecine. Look, I could wax lyrical about the visual portion of this Blu-Ray disc for an hour or so, but I shouldn’t need to. Simply put, this is – regardless of the quality of the film itself – a stunning looking presentation of the video portion, and easily ranks as one of the best of 2012 so far. Even saying that, I’m doubtful it’ll be bettered, since there’s almost no level higher in quality than this. Battleship looks amazing on Blu-Ray. 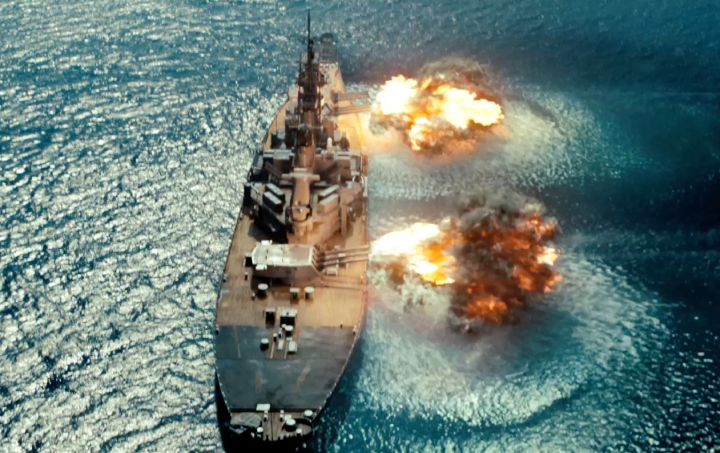 Of course, to go with the wonderful visual component, the primary audio track on this baby is second-to-none. Coupled with the gargantuan visual effects and the bombastic nature of the narrative, this brazenly full-bore dts-MA 5.1 track is a genuine foundation-mover. Some may lament the lack of 7.1 audio capability with this film, but considering how all-encompassing and enveloping the 5.1 mix is, you’d be hard pressed to argue that a 7.1 mix would improve it in any significant way. No, really. While you’d expect the film to contain plenty of low frequency representation due to the inclusion of major military hardware conflicting with alien craft over the ocean, the mix never goes for overkill. And by overkill, I mean that bass levels are representative of the on-screen action, without becoming over-present (like they were a little in Tron Legacy, which just felt like a bass-junkie’s wet dream) and killing the nuances in the mid-ranges and top-end. Bass is thunderous without overpowering the rest of the mix. Dialogue is well presented, with even the softest whisper being audible even when the most effusive explosions and action-oriented dubbing are throw at you. Channel separation is sublime, the crispness of the various effects being provided equal balance within the overall mix, and considering just how active this sound mix is, that’s saying something. The soundtrack isn’t too front-heavy either, with an equalized presence in both front channels and rear channels proving a truly wrap-around listening experience. The score, a pounding mixture of orchestral and rock-pop from Steve Jablonsky, sits back in the mix a little, although the jingoistic chest-beating of the US flag-wavers tends to see the trumpets blare just a tad louder when the good guys win. Battleship manages to accomplish something you’d probably consider an impossibility – it actually manages to maintain a sense of purpose when the mix just feels like it’s designed to beat the listener into submission. As a surround sound mix, Battleship’s primary dts track is a winner, and will no doubt make any audio enthusiast weep with joy. 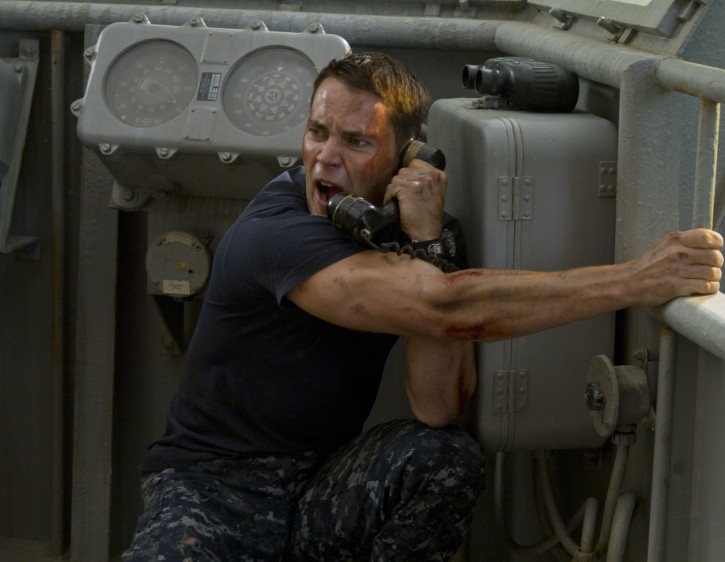 It’s apparent to me now that the makers of Battleship never really had a fanbase on their minds when they put together the bonus features on this disc. After all, had the studio (Universal) really believed in their product, they might not have given us such a slip-shod, cut-rate segment of extra content. Now, I’m not saying Battleship deserves a three-hour “making of” doco, far from it. But it might have been nice to have something other than several ten minute sound-bit EPK featurettes to dig into with regards to this movie. We see a somewhat syrupy guided tour of the real USS Missouri used in the film with Berg and a couple of know-it-alls who describe the legendary status of the ship verbatim for us every few seconds. There’s a somewhat “what if” alternative ending, with a Berg introduction. There’s some quickly edited featurettes on the shoot and filming at sea, neither of which offer much depth or even any back-story to viewers – you’re expected to know what the hell is going on without any introductions. Much like the film, I think. A trumped-up love-piece to director Berg smacks of ego, while the addition of a trailer for the inevitable video-game adaption is… well, nobody’s watching that one. The only featurette with any depth is one focusing on the visual effects, and even that’s too short and to shallow to really make it compelling. I’m sorry to say that I got through the bonus content on this disc in relatively short order without discovering anything even vaguely stimulating about the film that I didn’t already know from… you know, watching the film. If you’re buying this disc for some unique perspective on the behind-the-scenes of Battleship, you’re pretty much wasting your dollar.

Battleship is a film of such discordant commercial instinct it’s hard to know where the military ends and actual creative freedom begins. The film feels like a military propaganda piece, although the addition of ass-kicking alien marauders, while suffering problematic lapses in logic, buck this movie up into something approximating an “extravaganza”. I’m hard pressed to nominate this film as a must-watch piece of entertainment, even the “popcorn flick” kind, of which I’ve described it myself (damn second guessing!) but as an example of top line visual effects and a comprehensive assault on the aural senses, this Blu-Ray delivers everything you could possibly want from a big-budget effects piece with little restraint. Stick it on, and crank it up loud.