Director :   Joe Johnston
Year Of Release :  1991
Principal Cast :   Bill Campbell, Jennifer Connelly, Alan Arkin, Timothy Dalton, Paul Sorvino, Terry O’Quinn, Tiny Ron Taylor, Ed Lauter, William Sanderson, Clint Howard.
Approx Running Time :  108 Minutes
Synopsis:  After discovering the existence of a top-secret, and highly valuable, back-pack rocket suit, a young pilot tries to woo his lady-love with feats of derring-do, only to put her in the midst of a conspiracy that will have enormous consequences in the impending outbreak of war.
What we think :  A terrific throwback to the 30’s, The Rocketeer has all the classic hallmarks of the pulp adventure films which inspired it. The charismatic lead, Bill Campbell, and his gorgeous co-star in Jennifer Connelly, are all but upstaged completely by the bit-players here – Dalton, Arkin and Sorvino, not to mention the large-scale action sequences, and yet it matters not because the film sprinkles old-time Hollywood in with a pseudo Indiana Jones flavor. It works well, and although the slower moments do feel a little lengthy for a film supposedly so fun, The Rocketeer is harmless entertainment for all ages.

Ahh, the 30’s. That glorious time when the world was suffering from the Great Depression, Hollywood was in its heyday and women handled cigarettes like proxy genitalia. Okay, so the Great Depression wasn’t all that flash, but who needs to be reminded of that horror when we can relive the era in a dusty brown homage to pulp film from the period – Joe Johnston’s The Rocketeer. While the Hollywood of today is less about the art and more about the money (prove me wrong, Stephen Blairson), The Rocketeer shows us how the Cecille B DeMille vintage of cinema just felt more…. fun than the contemporary version. Echoes of celebrity cameos, from Clark Cable to WC Fields, and even Timothy Dalton’s vaguely Errol Flynn-esque Neville Sinclair, imbue this film with a sense of charm and longing that’s impossible to resist. This could be problematic for the younger crowd today, for whom many of these nods will prove entirely ignorant, but for fans of cinema and Hollywood, it’s great. While the film was considered (at the time) to be a disappointment – Disney never used the word “flop” in the reporting of the day, I think – it remains an enduring 90’s classic even now. The sort of film The Iron Giant riffed on, I think, with its hip-smart wink to those old stars of the era, while giving us the Spielbergian charm of modern 80’s classics. Johnston, who cut his teeth in the industry under luminaries like George Lucas and Spielberg, has since become something of a genre director de jour,  helming Jumanji, Jurassic Park 3, Universal’s horror remake of The Wolfman, and at the time of writing, Captain America: The First Avenger. After helming the Disney kiddie flick Honey I Shrunk The Kids, Johnston took on the duties of directing The Rocketeer, bringing his ability to create convincing effects sequences together with his well-honed sense of visual style to the comic book creation of the Rocketeer. 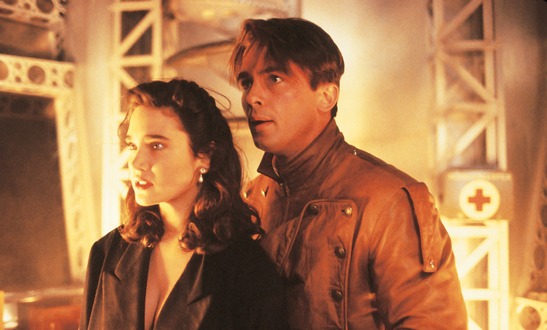 In 1938 Los Angeles, struggling pilot Cliff Secord (Bill Campbell) uncovers the location of a recently stolen rocket prototype – stolen from Howard Hughes (Terry O’Quinn), no less – and intends to use it to impress his girlfriend Jenny (Jennifer Connelly). With his debts mounting, Cliff and his mechanic/inventor friend Peevy (Alan Arkin) are looking at an upcoming airshow to gain practice for the National Pilot Championships; when Peevy takes Cliff’s place in the plane involved in the airshow, and gets himself into trouble, Cliff dons the rocket suit and flies to the rescue. becoming an instant celebrity, the unknown hero is dubbed the “Rocketeer”, and is immediately under scrutiny from the nefarious forces of local mobster Eddie Valentine (Paul Sorvino), who is under the employ of Hollywood heart-throb Neville Sinclair (Timothy Dalton). With both the FBI and the gangsters hunting for the rocket pack, Cliff and Peevy must run for their lives as the bullets fly in the quest to locate The Rocketeer. 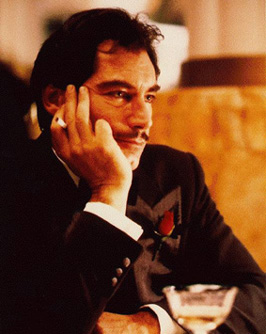 I’m so bored I could barely even be in this film….

The Rocketeer has all the hallmarks of a great action adventure. It has a ripping concept, a great cast, and a blistering score from James Horner: the production value is great, and the script bristles with genre flourishes than make any cheese-lovin’ fan smile. Does it hold up by today’s standards? Yes, I think it does. The film is problematic in spots, especially developing the “criminal element” subplots, but the overall fun of it all sweeps away any real negative points I could raise. The cast, especially approach the material with the kind of pulpish genre glee we seem to be missing these days: Timothy Dalton swashbuckles his way through the film as conniving villain Neville Sinclair, who both charms the ladies with his acting, and causes them to swoon with his debonair charm. Virtual unknown Bill Campbell is solid enough in the lead role of Cliff, and it’s easy to see why he got the part – for the life of me I still think he’s the same dude who played the lead in that JAG television series (he isn’t) – and his chemistry with co-star and on-screen girlfriend Jennifer Connelly is great to watch. Connelly does doe-eyed so well, and she radiates elegance as Jenny, the actress trying to get her big break. Alan Arkin is hilarious as Cliff’s sidekick, Peevy, while Paul Sorvino serves up a great mafioso-type intent on keeping his work American. 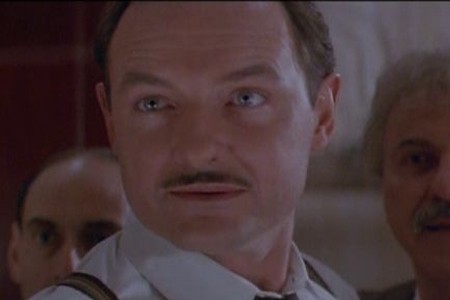 If this moustache gets any thinner, it’ll be a hair-lip.

Joe Johnston captures the look and feel of Depression Era LA extremely well. From the brown-blown expanse of the airfield Cliff works from, to the glitz and glamor of Hollywood’s nightclubs, every frame of this film captures the impression of a bygone era, an era Johnson (and producers Lawrence and Charles Gordon) obviously feels a kinship for, considering his cinematic heritage. Lensed by Apocalypse Now alum Hiro Narita, the film has that vintage feel while retaining the modern sensibilities with which it was filmed; the lighting and framing in this film is gorgeous, the colors leaping off the screen and the darker moments shrouded in noir-esque shadow. The visual effects, and keep in mind this film is vintage 1991, still hold up today: a number of matte shots are visible, and some of the green-screen footage feels of-the-time, but there are moments where you are so swept up in the cool adventure of it all that you don’t care. One shot in particular stunned me with its effectiveness: Cliff, falling from the sky after his rocket pack gives out, falls into a cloud, where the pack reignites and he blasts back into the sky. The glow of rocket ignition inside the cloud, followed by a streaking Cliff shooting past the camera, could have been filmed yesterday. 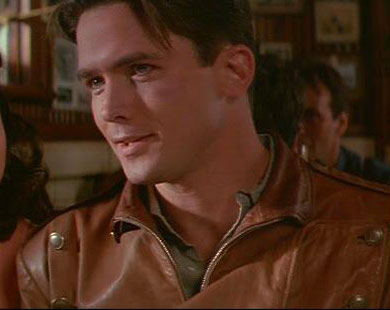 Folks often remark that one of the best parts of this film is James Horner’s score, and they’d be right. Horner, who would go on to write the themes to Braveheart and Titanic, gives just the right sense of adventure in his brassy, bombastic action score that swells with emotion and thrills, evoking the pulp films of the era. It’s eminently hummable, instantly recognizable, and altogether the perfect musical accompaniment to the on-screen action. Joe Johnston gives the action a large-scale flavor, with plenty of wide shots and a surprising dearth of quick-cuts; a commendable method in comparison to todays editorial hackery. There’s a sense of love about this film, a love for the making of it, and it seeps from every frame. 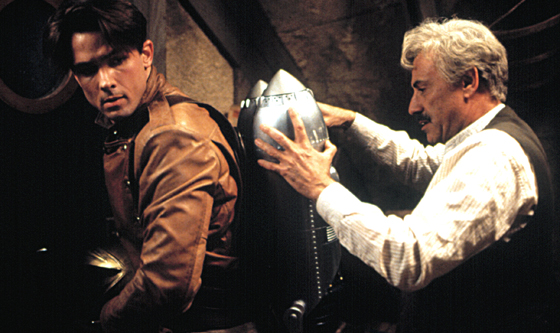 It’s crazy what you’ll do to me on a Friday night, mack!

The Rocketeer is the perfect Sunday afternoon pick-me-up, the kind of film you can watch with the kids and boo the bad guys, cheer the good guys, and fall hard for Jennifer Connelly (I mean, c’mon, this is Jennifer Connelly before she got all anorexic and shit) once again. It’s harmless, made-to-order junk food cinema, the kind of films we miss even though most of us aren’t old enough to remember them being released any more. Explosions, cool stunts, sword-fighting, cool one-liners, and the sheer fun of Hollywood (the kind Will doesn’t really like) make The Rocketeer the perfect film for all ages. You could do a lot, lot worse than stick this on the TV.