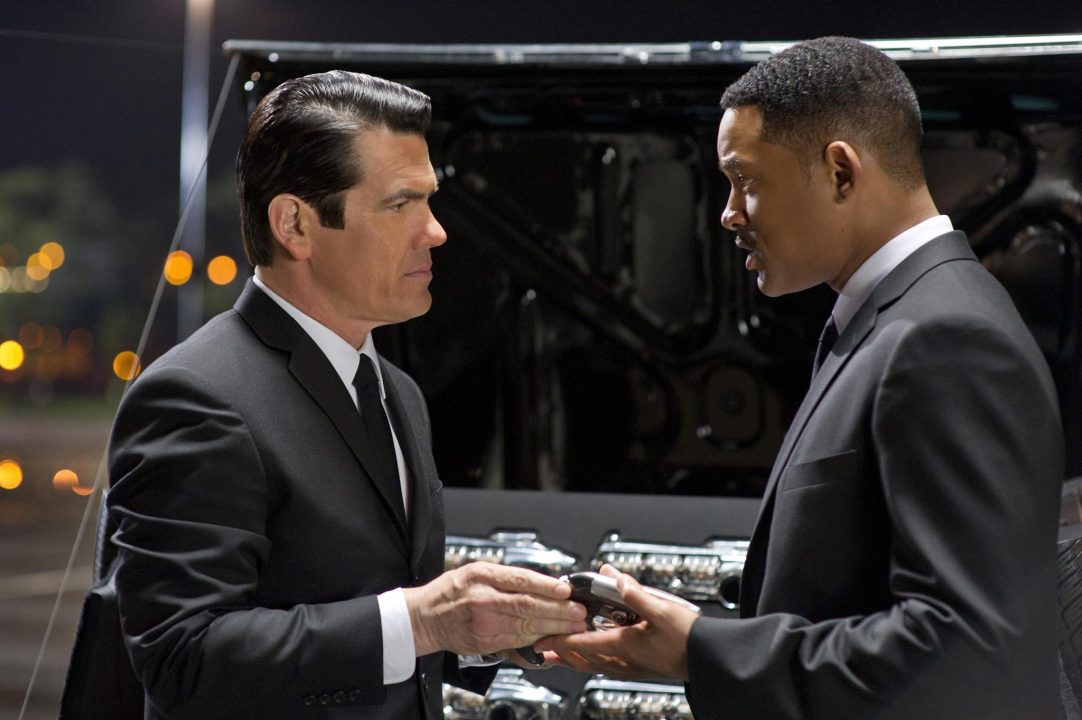 Director :  Barry Sonnenfeld
Year Of Release :   2012
Principal Cast : Will Smith, Tommy Lee Jones, James Brolin, Jemaine Clement, Emma Thompson, Alice Eve, Michael Stuhlbarg, Bill Hader, Mike Colter.
Approx Running Time :  116 Minutes
Synopsis:  A psychotic alien assassin escapes from incarceration on the moon, returns to Earth and promptly time-jumps back into the past to kill Agent K – leaving Agent J the only one of the Men In Black who remembers K being alive after that point. J, returning to 1969, meets a younger, more jovial K, and together they must hunt down the assassin before he irrevocably changes history.
What we think :  Bland, insipid threequel confuses the mix of sci-fi action and comedy the first film got just right. Everything about this film screams “pointless“, although it does try and up the ante with a time-travel plot and a potentially cool villain – so if we were awarding points for trying, MIB3 might get full marks. We’re not awarding points for trying, however, so MIB3 is left to rest on what it actually accomplishes…. not that much, really.

I don’t think there was any call to resurrect the Men In Black franchise. Nobody I know has ever mentioned in passing that they’d like to have seen a third (hell, even a second seemed pointless back in the day!) entry into the comic-come-film series that capitalized on Will Smith’s Fresh Prince persona trying to integrate with a regimented secret Agency; so it came as something of a surprise that Smith and Co would embark on another film venture where none seemed required. Perhaps it was left-over guilt for the lackluster MIB2, a film so ordinary it even made Tommy Lee Jones look bad, and that’s some hard work right there. Whatever the reason, the decision to green-light a project so past its “Best before” date seemed fraught with danger unless they got things just right. God forbid a film as woeful as MIB2 arrive in cinemas. It’s a pity, then, that a film just as woeful as MIB2 arrived in cinemas, because while it has points of order which are better than the immediate ancestor it’s spawned from, MIB3 remains a confused, middling affair lacking any kind of spark or energy.

After escaping a maximum security prison on the surface of the moon, Boglodite assassin Boris The Animal (Jemaine Clement) uses alien technology to jump back in time to 1969, where MIB Agent K shot off his arm, in order to kill him before he does so. In the present, K (Tommy Lee Jones) and J (Will Smith) investigate a recently crashed ship in New York, and determine that Boris has indeed escaped, and pursue him. One evening, J notices that everyone seems to have forgotten about K – there are strangers in K’s apartment, and even the MIB team seem to think that K was killed by Boris The Animal in the past. Realizing that Boris’s plan has succeeded, J locates a device able to return him to 1969, where he continues to pursue Boris before he can get to K. The younger K (James Brolin) and J discover another alien being (Michael Stuhlbarg) who holds the key to Earths continued defense against the Boglodite hordes, the ArcNet, which needs to be launched into space to protect Earth in the future. With Past Boris and K doing battle on board Apollo 11, the rocket delivering man onto the Moon for the first time, and J battling the “future” incarnation of Boris to stop him from killing K, the fate of humanity – and K himself – rests on J’s ability to think laterally and save the day.

It’s a testament to Will Smith’s choice of projects that he has a fairly impressive strike rate of successful films – not too many of his movies have been unsuccessful, if actual bombs. Of course, known disasters such as Wild Wild West come to mind, but if you look down his filmography you’d be struggling to list his actual crap films on the fingers of one hand. As a renowned triple-threat, Smith’s parlayed his talents from the TV screen into film and music, and has never looked back. The usually affable star seems a little like a black Jimmy Stewart – he’s often the All American Guy, ready with a wink and a smile for the audience, and an off-screen persona that intangibly makes us not want him to fail. He’s likeable, and that trait isn’t overly common in Hollywood. You want him to be good in everything he does. Which makes his actual failures feel ever so more bitter. I’d class MIB3 as a failure. Not Wild Wild West epic fail, but it’s sure getting close to that vicinity.

Having had a think about it now, there’s at least three major problems with MIB3 that I can see. The first is the script, which feels like it’s a bunch of table scraps from the previous two films combined in a blender. Etan Cohen’s script is a mishmash of ideas, half-developed plot ideas and, in the end, a seeming lack of inspiration on just how to finish the movie off. The final five minutes of the film are actually genuinely moving, as we are witness to a pivotal moment in J’s history, with a surprising link to K, but the moment comes from nowhere and seems counter-intuitive to the rest of the film. The film feels constructed, for want of a better word, with each scene and character never quite feeling like they belong in the movie. Cohen’s script lacks real wit, too, leaving the bulk of the humor to Smith’s ad-lib style – a style which, surprisingly, doesn’t seem to work as well this time round. Sonnenfeld can’t deliver on the visuals of the film either, with the incongruity of the aliens and the human world coming across too green-screen-ish. Not to mention some of the visual effects seem a tad…. off.

On the casting front, Sonnenfeld should be given props for putting Emma Thompson in to replace the late Rip Torn as the MIB Chief, O. Thompson’s no Rip Torn, that’s for sure, but she holds her own as the surly chief of the MIB agency. Bill Hader pops up as Andy Warhol in one of the films’ unfunniest scenes – not one chuckle from any of the patrons in the cinema I was in. The lovely Alice Eve appears as a young O, although she’s horribly underused, and Jemaine Clement does a good job – if badly written – of portraying the central villain, Boris The Animal. Clement is hidden by an array of makeup and effects, and seems to be channeling the same vibe as Vincent D’Onofrio did in the first film – he’s all huff and bluff, but the character seems too cartoony to be taken seriously. There’s an effort to make him more dangerous, but the rest of the film doesn’t support this. The lack of quality Bad Guy is problem number 2.

Poor Tommy Lee Jones. As one of the stars of this film, he’s completely outclassed by fellow lead James Brolin, who does a better impersonation of Jones than Jones does playing himself! Brolin’s deadpan delivery and wry smile is spot-on perfect as the younger K. It’s an uncanny portrayal, and is perhaps the best thing this film has going for it. Smith’s repartee with Brolin is fun, although there’s not enough of it. And Tommy Lee Jones isn’t in most of the film, so he gets short thrift as well, which is a shame. It’s also problem number 3. The film can’t decide where its focus is: one minute, we’re thinking it’s about Smith and Jones, the next it’s about Brolin, and the next it’s about Boris the Animal. The script isn’t sharp enough to straddle all three focus areas, and so ends up just being a bit of a jumbled mess of ideas all floating about around Smith’s often gargantuan head. There must have been a clause in Smith’s contract stating a minimum requirement for extreme close-ups on his face, because there’s no Earthly reason a sane director would put so many in a single film. Almost every second minute, we’re privy to all but the inside of Smith’s sinuses, as Sonnenfeld’s camera pushes in to slightly distort Smith’s visage in a faux display of “emotion”, something this film lacks almost entirely.

Indeed, the combination of all three of MIB3’s problems would be a lack of heart. It’s a film which is not only uninteresting, but seems uninterested in itself. Sonnenfeld seems on cruise control for this, hardly bothering to join the dots of the problematic script, while Will Smith’s strange lack of charm here is baffling. The characters lack any sense of being genuine, nor do they generate any empathy from us, save for that five minute moment right at the very end. It’s a standard save-the-world adventure, which offers little nuance or humor; MIB3 just reeks of Hollywood excess, a film made simply to make money, with little in the way of effort put in to give audiences something to really cling to emotionally. On the whole, it’s marginally better than MIB2, but nowhere near the coolness of the original film.

What Others Are Saying About Men In Black 3:

Sam at Duke & The Movies hated it: “Not much radiates from MIB III. That is, with the exception of the absorbing talent of Josh Brolin. Who not only imitates Agent K, but recreates him. Young Agent K is a kind and soft man, one that displays outwardly emotion. The reasons for why he ultimately becomes the way he does (Tommy Lee Jones), is one of the few satisfying payoffs in a film that perpetually introduces new characters and subplots with no resolution.”

Terrence over at The Focused Filmographer enjoyed it: “I’m glad to report you will not need a neuralizer to have your MIB3 watching experience zapped from your memory.”

Colin at Nevermind Pop Film didn’t mind it: “It’s not a completely original film, but it’s enough to pass an afternoon. Where Men In Black 2 faltered in its rigidness to recreating the original formula, 3 veers off the beaten path.”

Dan The Man thought it passed the time well: “Men in Black III may not be a threequel we needed to see nor does it bring anything new to this almost-forgotten franchise, but it does bring a lot of kid-oriented fun to it, with charming performances from the cast, a breezy pace, and a nice mixture of comedy and action that will remind you as to why this franchise worked so well in the first place.”

The dudes from 3 Guys 1 Movie thought it kinda sucked: “Josh Brolin was the only thing worth watching in this film. Not sure why he was wasting his talents in this tedious film.  One can only assume he has debts no honest man can pay or lost a bet of some kind.”

The guys over at The Movie Blog felt a little “meh” about it too: “Nothing is truly fantastic, but nothing is exceptionally terrible. It just sort of is.”

Think we got it wrong? Have a different opinion? We want to hear it! Let us know your thoughts in the comments section below!!