Movie Review – Secret Of My Success, The

Director :  Herbert Ross
Year Of Release :  1987
Principal Cast :  Michael J Fox, Helen Slater, Margaret Whitton, Richard Jordan, John Pankow, Mercedes Ruehl.
Approx Running Time :  90 Minutes
Synopsis: Young up-and-coming financial whizz-kid inadvertently scams his way into a senior executive position at his uncles company, although he’s only been employed as a mail-room clerk. Leading a double life in order to get ahead, things take a turn for the worse when he falls for the bosses mistress, and his wife falls for him.
What we think :  Typically fast-paced 80’s comedy starring a very young Michael J Fox, The Secret of My Success relies almost too heavily on the charm of its leading man, and not enough on the supporting cast. It’s entertaining, if somewhat dated by current standards, although as a curiosity and an examination of Fox’s career, you wont find many funnier.

Ahh, the 80’s. The decade of decadence – at least, that’s how I saw it, where business was booming and businessmen were the epitome of cool. Not so? Just look at films like Wall Street, as an example, where the financial sector was the focus of what it meant to be “successful”. Michael J Fox’s post-Back To The Future project, The Secret Of My Success, capitalized on that genre of film, by making Fox’s Family Ties Alex Keaton move to New York and sneak his way up the corporate ladder. Okay, so Alex Keaton doesn’t exist in this film, but the character here is almost an exact carbon copy of that sitcom icon, so close in ego and drive to succeed is he. While the film’s somewhat desperate farcical elements contradict the more serene romantic elements, or even the blustering boardroom antics, Success has a number of things working in its favour – not the least of which is Fox himself. Still, some two and a half decades after it came out, does the film still have something pertinent to say about our rampant capitalist ideology? 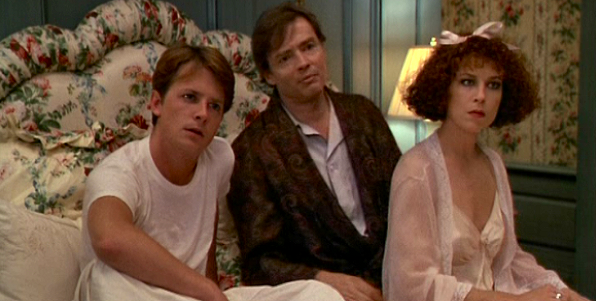 It doesn’t start that great, but the ending is awesome!

Brantley Foster (Michael J Fox) has just graduated from business college in Kansas, and moves to New York for work – only to discover that his new job no longer exists, since the company just went under. Desperate not to have to return to Kansas, Foster gets work in the mail-room of his Uncle Howard’s company, Pemrose Incorporated. This wasn’t the kind of work Foster trained for, so he surreptitiously uses a corner office to climb the corporate ladder as Carlton Whitfield, gleaning information about the company through his connections in the mail room. As Carlton, he romances fellow “suit” Christy Willis (Helen Slater), and is preyed upon by Howard’s wife Vera (Brantley’s Aunt by marriage) – a man-eating nymphomaniac who just happens to own the company Howard’s running. As he leads a double life as Carlton, Brantley befriends a number of Wall Street heavyweights who can help him become the success he so desperately craves, but his deceptions may lead the love of his life to leave him forever. 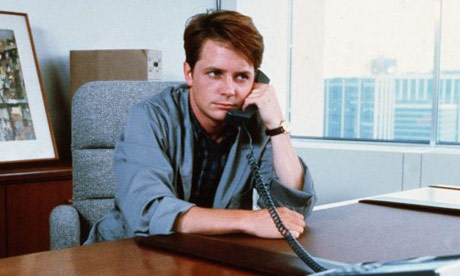 Do you know the way to San Jose?

Part sex romp, part romantic comedy, part financial gobbledegook, The Secret Of My Success is an uneven attempt to capitalize on the start status of 80’s uber-teen Michael J Fox, who looks for all the world like he was about 17 when he made this – he wasn’t, he was 25. The 80’s, when greed was good, feels like quicksilver in this film, which melds about three genres of film into one and comes up with a fairly funny, somewhat dated and always Fox-driven piece about losing oneself at the expense of ones dreams. It’s not the raucous adult-style humor we’ve come to know and love these days; The Secret Of My Success pre-dates The Hangover and American Pie by about 10 years at least, so the humor is derived less from the sexually aggressive Aunt Vera character and more from the reaction of Fox’s Bradley Foster. Fox does his now-familiar “breathless enthusiasm” character once more, much like he did in Back To The Future, Doc Hollywood, and even Teen Wolf,  moving through this film like a supercharged jackrabbit; Fox looks perennially startled in his early films, and Success is no different. 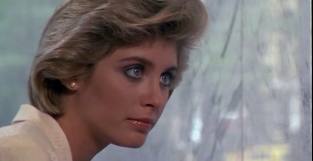 The uneven tone of the film, in which the central character must engage in farcical sex-romp comedy with Aunt Vera, climb the ladder of finance with a canny understanding beyond his years, and lust after the seemingly unattainable hot-goddess from the top floor, is about the only real negative for the whole film: the characters aren’t exactly steeped in realism, so you can forget about this being in any way believable, and the story relies less on dialogue and more on the slapstick-esque nature of Fox to generate real laughs. It plays as a comedy, but director Herbert Ross, best known for films like Footloose, Steel Magnolias and Boys On The Side, tries to get more out of it than the script, by Jim Cash, will allow. Is this film meant as an indictment on the corruptibility of the elite businessman? Is it a statement on just how shallow we all are for wanting to be wealthy and seeing wealth as a measure of “success”? Or are we meant to take this film exactly as it seems: as a bumbling comedy about a kid wanting to impress a girl and leading two lives in order to do so? Whichever the case may be, Success is still eminently watchable, especially for the chemistry between Fox and his sultry co-star Margaret Whitton as Aunt Vera. 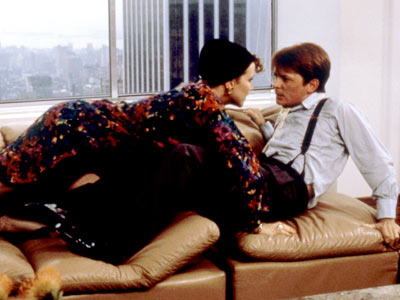 The film’s cast are all given fairly generic roles to play; generic by 1980’s standards, at least. Helen Slater seems somewhat out of place and completely out of her depth as the canny businesswoman whom Fox falls for – she’s gorgeous, sure, but comes across a lot like Rosie Huntington-Whiteley did in the last Transformers movie. Eye candy, and not much else. Richard Jordan skirts the implausible as the Pemrose CEO, Howard Prescott, on the one hand running a multi-million dollar company like a Nazi death-camp and on the other, unaware that his wife is shagging all the young meat she can get her claws into. The fact that he’s having an affair with Christy as well (something Brantley’s unaware of) seems somewhat creepy considering the age gap, although maybe this was the norm back in the 80’s? John Pankow does well as the cynically self-aware Fred, who works with Brantley in the mail room, and is this film’s “everyman” character moreso than even Fox’s. Sharp eyed viewers will also spot US Stage and screen legend Elizabeth Franz as Brantley’s mother, Mercedes Ruehl as a waitress, and Herman Munster himself – Fred Gwynne – as a competing CEO looking to take over Pemrose. 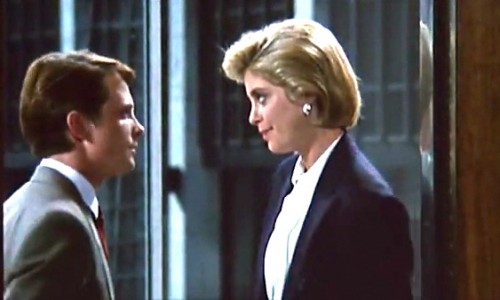 You know, I think this hairstyle will be around forever!

80’s comedies don’t get much more friendly than this – Fox is a likeable lead, and Helen Slater is always a joy to cast your eyes upon; the film does feel a little too forced at times, which does come out in the more intimate sequences, but generally it’s a pleasing, self-effacing romp that’ll have you guffawing at the ludicrousness of it all each time.