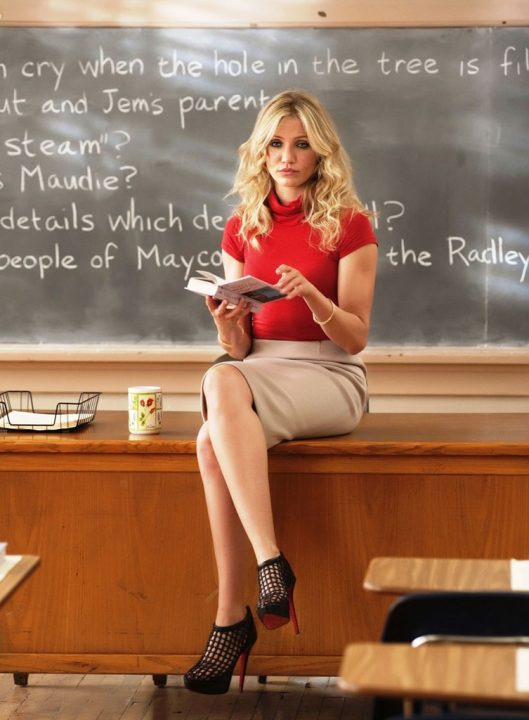 Director :  Jake Kasdan
Year Of Release :  2011
Principal Cast : Cameron Diaz, Justin Timberlake, Jason Segel, Lucy Punch, John Michael Higgins, Thomas Lennon, Eric Stonestreet, Phyllis Smith.
Approx Running Time :  90 Minutes
Synopsis:  A shallow, obnoxious teacher spends her time looking for a wealthy man to sponge off, before realizing that in order to make herself more attractive, she needs bigger boobs. In order to raise the funds to have the required surgery, she engages in numerous plans to capture the attention of a fellow teacher who just happens to be mega-wealthy.
What we think :  Try as she might, Cameron Diaz can’t do horrible. She’s just too hot for that. The similarly titled Bad Santa, which featured Billy-Bob Thornton, remains a classic due to the truly horrible nature of the leading character, while Diaz’s Bad Teacher seems less Bad and more Cruel & Nasty. Still, Bad Teacher has enough uncomfortable comedy in it to make this a genuinely funny film, even if the comedy is uneven and the characters generally unappealing. Worth it for the single scene where Diaz is dry-humped by her former real-life flame Justin Timberlake, a moment where the Hollywood stars aligned and true comedy genius is born.

Questionable vulgarity aside, Bad Teacher is pretty watchable. There’s a lot to like about Cameron Diaz, in particular that magnificent smile, which seems to be a cast member in its own right. Diaz knows how to carry a film, and here she’s cast against type as the slutty, bawdy, rude-and-crude Elizabeth Halsey, a slacker middle-school teacher seeking to escape her drugery by finding a rich man to marry. After being dumped by her latest fiancee, Elizabeth soon sets her sights on new teaching temp Scott Delacorte (Justin Timberlake), an heir and wealthy suitor. Trouble is, fellow female teacher and part time crazy-person Amy Squirrel (Lucy Punch) is also after Scott, while Elizabeth’s plans to attract a man seem to hinge on one expensive breast augmentation. As the loudmouth, opinionated, never-afraid-to-use-her-hotness Elizabeth, Diaz tries to dredge up the part of herself suited to such a horrible person, for a mixed result. The script is barbed with that wry, dark humor we’ve come to expect from our “adult” comedies these days, and although plenty of material is thrown at the children Elizabeth is supposed to teach, the best stuff comes from Diaz’ adult co-stars. Namely, Justin Timberlake, Phyllis Smith and the hilariously insane Lucy Punch. It’s the latter who takes it up to Diaz as the films’ singularly memorable character, with Amy Squirrel slowly becoming nuttier and nuttier as she attempts to thwart Elizabeth’s plans to steal “her” man, Scott.

Far and away the best scene of the film is a moment between Diaz and Timberlake (once a real-life off-screen couple, who split after a lengthy relationship) dry humping in a hotel room – and exquisitely ironic moment of writing/casting/editing that brings two former lovers together once more: is it just me, or was that both incredibly awkward and side-splittingly hilarious? No doubt Diaz and Timberlake were up for a bit of a laff at their own expense, but it’s this scene that grabs Bad Teacher by the balls and shakes it roughly. The script is peppered with a ribald humor that is genuinely funny, even if the luminous Cameron Diaz is woefully miscast as Elizabeth. I say miscast because there’s no way Diaz is able to adequately play the egotistical Elizabeth with credible reality – Diaz is all fluffy and light, and the role is a confusing mix of small bubbles, dim light, snarky resentment and catty cynicism, the latter of which I think Diaz is unsuited to portray. When the script calls for a Bad Santa-type cringe-gag, Bad Teacher comes in as a sugar-free alternative. Director Jake Kasdan, in trying to amp up the attitude Diaz should have as such a bitchy, shallow character, doesn’t get us to really empathize with her plight – this empathy would have allowed us to follow her character arc and derive some enjoyment from it, yet it never eventuates. Elizabeth is a character we can see becoming redeemed in some way, so any and all her obnoxious acts have that feeling of “we’ll forgive just about anything” about them. The secondary characters are all funnier than Diaz, especially the wonderful Phyllis Smith as Lynn, who channels Stephen Root’s Milton from Office Space so well it’s scary. The film is funny enough, although I do think the role of Elizabeth should have been played by somebody more suited to being a complete cow – and Diaz doesn’t give me that vibe. Bad Teacher isn’t bad at all; in fact, at times it is genuinely funny, and for somebody with a self-proclaimed iffy sense of humor, that’s saying a lot.