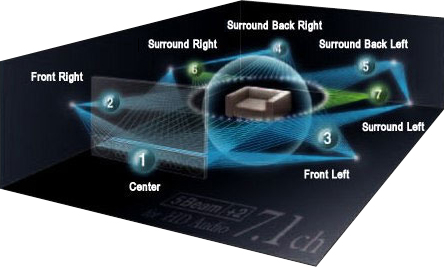 This post is something of a response, and partially a companion piece, to a couple of questions put to the blogosphere by fellow film blogger Scott Lawlor over at Front Room Cinema.

5.1 system with an extra 3 subwoofers added in, effectively making it a de facto 5.4 system. Yes, the bass is awesome, and yes, I love to have it loud. There’s nothing better than a powerful digital multi-channel soundtrack up at full volume, shaking the windows and loosening your bowels. What a lot of amateur home cinema enthusiasts fail to realize, however, is that volume doesn’t always equate to quality. Often, a poorly set-up home cinema might sound pretty beefy when you crank up the volume, but often, a little tweaking to get the right balance between low end, mid range and top end and even the most budget-oriented set-up will still sound wonderful up high. A little story: my brother-in-law, who lives over in Sydney, came to visit our home a few years ago, where he saw my fairly awesome sound set-up, and set out to replicate it when he got back to his place. On our next visit to him, he’d gone out and purchased a 5.2 out-of-a-box surround set-up, but had set it up to be so bass-heavy it was painful, truly painful, to listen to. He was one of those guys who thinks that if you can’t hear anything over the bass, that’s a good thing. I didn’t have the heart to tell him it sounded terrible, rather, I felt glad that I’d put in the effort and learned a few things along my own home cinema journey. Those of you reading this who have even a modest audio set up, either an out-of-the-box cheapie or a more expensive component (or, as the Brits seem to enjoy calling it, a “separate”) system, you’ll know that with the proper speaker placement and correct level adjustment, you can go from a boomy, boxy sound to a smooth, neighbor-annoying audio presentation that will sound good no matter how loud it is. Over-driving a poorly calibrated subwoofer can do damage to not only your hearing, but to your equipment as well.

To answer and clarify some of Scotts questions and concerns, first we need to examine the difference between 5.1 and 7.1 sound systems, and how speaker placement can maximize the “surround” component of your audio system. A lot of the answers to the basic questions involved in this article can be found in our Widescreen Series, specifically here. 5.1, developed in the early 90’s and released in it’s Dolby format on the theatrical release of Batman Returns, and in its dts iteration on Jurassic Park in 1993, involves the placement of 5 discrete speakers for full range audio, and 1 subwoofer for the low frequency audio, in a room to reproduce the soundtrack of a film on DVD or BluRay. The twin rear channels, which traditionally sit behind the seating position in your cinema room, are designed to provide a diffuse, non-specific sound to convince your brain their is nose coming from behind you. Occasionally, a more directional sound will be required by the films’ sound designer, which the two channels behind you are also designed to reproduce. 5.1 is the default audio for most multi-track films ever since, and has become the default audio track (in either lossy or lossless format) on DVD and BluRay. The relatively new 7.1, which adds an extra two speakers to the surround field, is designed to create a more accurate rear-of-viewer audio experience, with a more spatial soundfield able to recreate the cinematic experience with more depth and detail – supposedly.

Scott asks a couple of questions, the first of which is: is it worth upgrading from 5.1 sound to the 7.1 option? His second question is: will I notice the difference? I admit, I’ve had friends ask me the very same questions. These two questions require a little thought, before we answer them definitively. We’ll answer the second question first, I think.

The good thing about 7.1 soundtracks on the high definition format of BluRay, is that even if you do not have a 7.1 system, your audio receiver will (should) downmix the extra audio signals into your pre-existing two rear channels. This means you’ll still get the full audio signal provided by the original mix, it will just be shunted through the only speakers available. So if you’re worried that by playing a 7.1 audio track through a 5.1 system you might “miss” something, worry not. You won’t. By having the ability to decode the extra two channels of information, however, provides even better spatial definition than traditional 5.1 – the caveat to that is that you really need a room big enough to generate the value.

As Scott mentions in his article, “a well installed 5.1 system is always better than a poorly installed 7.1 system”, and never truer words were spoken. The value, ie the worth, of 7.1 comes with the room size the audio needs to fill. Keep in mind that the extra two channels need to be reproduced by two extra speakers, therefore those speakers need to go somewhere – directly behind the listening position – and often, folks don’t have the available space in their listening environment to put those two extra speakers. Smaller rooms, such a standard family lounge room, bedroom or apartment, don’t really lend themselves to being able to position these two extra speakers due to limited space within each environment. With the smaller listening space comes a decrease in the practical need for extra speakers to assist with audio reproduction. The ability of the regulation left and right rear channels to produce a good audio environment is increased with a smaller need to fill the room with noise. What I’ve found is that 7.1 is best used when you have a large open space to fill with sound, more like a small cinema than a traditional lounge or sitting room. The extra two channels actually go a long way to assist in the more precise definition of rear-positioned soundfield action. As Scott alludes to in his article, cinema auditoriums require a few extra rear speakers around the walls to ensure maximum audio definition in such a large listening space, while you’ll often find less in the smaller, more boutique cinemas. The same is true of home audio – for a smaller room, less is okay. Sure, it’s preferred to have that additional information on display, but the cost-to-benefit ratio isn’t always going to work in your favor.

All this taken into account, let’s answer Scott’s second question: will I notice the difference? Depending on your room size, the answer is always yes, but the question more accurately needs to be a combination of both questions: can I justify the cost of an upgrade for only a small difference?. Those of us without the six-figure incomes to build our own mini-cinemas will usually respond with one eye firmly on the family budget. But in tangible, real-world speak, the answer is usually no. The difference between the two audio formats in a mid-level audio environment is minimal compared to the additional cost to upgrade to 7.1. I guess it depends how anal you are about your sound reproduction, as to whether you’ll justify the expense. Those of you with larger rooms will instantly find the additional audio channels make a significant difference in the accurate audio presentation from a BluRay disc. Therefore, you’ll find it beneficial to upgrade your system.

Another complaint amongst those considering this upgrade is the apparent dearth of 7.1 soundtracks on BluRay. The “worth” Scott is talking about also includes whether the additional cost of an upgrade is justified by readily available material with which to show it off. Sure, the vast majority of audio tracks on both DVD and BluRay contain a standard 5.1 mix, although there is an increasing number of studios willing to release their product with a 7.1 track on board. Recent films, such as Tron: Legacy, and Toy Story 3 (both from Disney, if you’re interested) contain 7.1 audio tracks, as do a number of Lionsgate discs released over the last few years. 7.1 is not an industry default, it must be said, but my guess is that it will soon become as predominant as 5.1 did when DVD first came along. This is just my opinion, mind you, not some tidbit of gossip I have from an inside source, but it stands to reason that with the high definition boom of BluRay, the quality of a 7.1 mix will only make them more appealing – especially to high end users. The more studios come on board with 7.1 audio, the more material you’ll have to show off with. As support for 7.1 grows, so will the market. So to the naysayers crying out that 7.1 is dead and buried before it’s off the ground, because there’s nothing out there to hear with it, I say be quiet. The waters are rising to a flood. Slowly, they will arrive.

I hope this goes some way to satisfy your questions about the 7.1 audio format, and maybe it’ll clear your mind to allowing you to more accurately decide whether an upgrade is truly worth it.