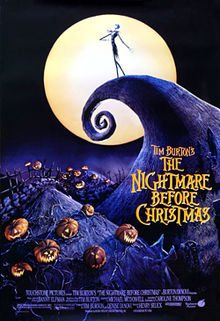 Director : Henry Salick
Year Of Release : 1993
Principal Cast : Voices of Chris Sarandon, Catherine O’Hara, William Hickey, Glenn Shadix, Ken Page, Ed Ivory & Danny Elfman.
Awards : Academy Award Nomination: Best Visual Effects. Hugo Award: Best Visual Presentation.
Approx Running Time : 90 Minutes
Synopsis: King of Halloween, Jack Skellington, is tired of the same old holiday, so he embarks on a scheme to take over from Santa Claus and become the new figurehead for the Christmas season. Unfortunately, due to Jack’s inherent “Halloween-ness”, he finds that the spirit of Christmas might not be all he thinks it is.
What we think : Well filmed, dark and utterly captivating, Nightmare is one film that’s hard to fit into a specific mold. Is it a Christmas film or a Halloween film? Is it suitable for kids or only for adults, given its dark themes and style? Truth be told, it doesn’t really matter, since the film remains an essential watch whenever Christmas comes around. Superb animation techniques, great music from Danny Elfman, and a kooky, elaborate story from Tim Burton, make this film a genuine, bona fide classic.

There’s something charming about stop-motion animation, isn’t there? Particularly the kind where an entire film is made with it, just like The Nightmare Before Christmas. Long before Wallace & Gromit took on the Were-Rabbit, Jack Skellington took on the Christmas season and owned it for about fifteen minutes. Skellington, of course, being the king of Halloween, the most un-Christmassy holiday ever devised. From a story by Tim Burton, Hollywood’s weirdest mainstream director, and directed by Burton understudy Henry Salick (who’s debut stop-motion film James & The Giant Peach was a standout!), Nightmare Before Christmas is a whimsical, lyrical, visual delight. The characters are strange, in the most manic Tim Burton way, and the world they inhabit is equally kooky: but the Halloween-styled Christmas riffs elevate this above simple animated mockery to actual art. Jack Skellington, the depressed and anorexic king of Halloweentown, is fed up with the holiday he’s ruler of. Halloween has lost its charm, so when he sees how happy folks are over Christmas, he decides to steal the holiday for himself. Capturing Santa, devising his own set of Christmassy-halloween versions of the holiday seasons cliches, and proclaiming himself the new “Sandy Claws”, Jack becomes a victim of his own covetousness.

The Nightmare Before Christmas is an absolute delight of a film – the animated form is simply stunning with some of the ideas and concepts on display here. How much is Burton and how much Salick had control over is hard to tell, but the film reeks of the formers bristling cinematic stylings and visual themes. Burton’s fingerprints are all over this one, and it’s often led to people mistakenly believing that he actually directed it, instead of just producing the film. Nightmare is a film best described as “disarmingly kooky”, the kind of freaky Burton-esque style that meshes the traditionally Halloween-ish visual elements with an off-kilter child-like fairytale. You can see Burton’s style in films like Edward Scissorhands, Beetlejuice, and in later films like Sleepy Hollow and his updated version of Charlie And The Chocolate Factory, and it’s frame-for-frame visible in this effort. From the set design to the whimsical dialogue and melancholy tones within the narrative, Nightmare Before Christmas is out-and-out a Burton film, brought to life by the keen hands of Salick. The film’s story is effortlessly simple, and in terms of a “kids film”, works a treat. It’s this mix of the bizarre and ghoulish with the magical, bright-shiny Christmas season that brings a smile to the face of even the hardest of cynical hearts, as the morose Jack Skellington develops his devious plan to steal the holiday season. The scripting, of which the majority seems to consist of Danny Elfman’s lyrics set to his moving, rousing music, moves between elation and melancholia, bringing the echoing sadness of creatures destined to forever bask in the dull shadow of Halloween and the possibility that there might be something better for them into the imagination with a realism lacking in so many live action films. Caroline Thompson, credited with the screenplay, really should have shared that credit with Elfman, whose lovely songs also serve to move the story forward – each song Elfman brings to the table never once halts the narrative flow, it builds the characters, the story, the dramatic tension, only so much more beautifully than characters sitting about a table having a chat.

Those of you who have yet to fall under the spell cast by this film, I can do little more than once more reiterate my highest recommendation to you. The Nightmare Before Christmas, even with its inherent Halloween flavoring, is a perfect Christmas film with which to fall in love. Beautifully animated, really well designed and structured, and featuring a gorgeous soundtrack by Danny Elfman, you simply can’t go past Jack Skellington’s misadventures in trying to steal the holiday season for himself.

17 thoughts on “Movie Review – Nightmare Before Christmas, The (Mini Review)”