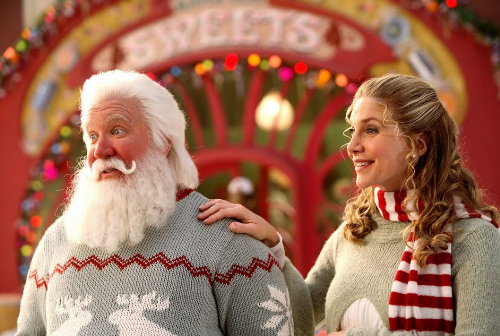 Director : Michael Lembeck
Year Of Release : 2002
Principal Cast : Tim Allen, Spencer Breslin, Judge Reinhold, Elizabeth Mitchell, David Krumholtz, Eric Lloyd, Wendy Crewson, Liliana Mumy.
Approx Running Time : 90 Minutes
Synopsis: New Santa Scott Calvin is settled into his job as the big guy at the North Pole, until he discovers that he is on a deadline to find a wife before he reverts back to his human form and Christmas is ruined. In order to find a wife (within 26 days) he must travel back to his real life, leaving a fake Santa copy in charge of the Elves and the workshop. Trouble is, when the fake Santa starts to change things for the worse, the battle for the North Pole begins.
What we think : Surprisingly charming sequel to the original gem, Tim Allen and the team do a wonderful job recapturing the charm and magic that made the first film so great. The majority of the original cast return (albeit slightly older), and a few new ones are thrown into the mix – the darker nature of the “fake Santa” storyline may be too adult for the younger kiddies, but the drama and romance are handled well by director Michael Lembeck. A solid, winning formula once more transports us into the world of the Santa Clause.

It truly does take a brave viewer to watch a Christmas film and actually feel good about it. Most Christmas films end up being saccharine-infested Holiday cheer-heavy schmaltz-fests, or dull, stupidly conceived and ill-executed “Christmas-comedies”  in the vein of crap like Four Christmases, Christmas With The Kranks, or Fred Claus, to name only three off the top of my head. The Santa Clause managed to deliver a Christmas movie that balanced the schmaltz and actual emotional content with extraordinary success – even more surprising considering the film came out in the 90’s, a decade in which films became increasingly marketed towards big-budgets and shitty-stories. The inevitable sequel to The Santa Clause came out a few years later, with the original cast returning and adding in a few new surprises, and to everyone’s complete shock, it too wasn’t that bad a film, even for a sequel. Tim Allen’s best film franchise ever actually improved on the original, surpassing the aww-shucks cutesy whimsy of film 1 and building on the magical, fantastical elements that made that film so good.

Scott Calvin (Tim Allen) has now been Santa for eight years, and has become what many consider to be the best Santa yet – until his chief elves, Bernard (David Krumholtz) and Curtis (Spencer Breslin) unleash the news that the time has come for Santa to find a Mrs Claus (yes, that clever pun even worms its way into the film, the “missus clause”… ho ho ho!) and settle down in wedded bliss. Failure to do so by the end of the next Christmas Eve will result in Calvin losing the magic of Santa, and effectively ending Christmas forever. Yeah, the pressures on. Damn those evlish lawyers and their stupid clauses, right? As if that wasn’t enough, Calvin’s son, the now-16 year old Charlie (Eric Lloyd) is getting himself into trouble at school, due to not being able to tell anyubody that his father is actually the real Santa. He’s become rebellious, which leads to Scott, his ex-wife Laura (Wendy Crewson) and her new husband Neil (Judge Reinhold) to an emergency PTA meeting with the school’s principal, Carol Newman (Elizabeth Mitchell). Scott’s extended sabbatical to the “real world” to fix his relationship with Charlie, and find himself a wife, leads to the creation of a Santa-avatar, if you will – a life size replica of the real Santa, created by Curtis. All goes well for a while, until the Toy Santa begins to assert his authority over the North Pole, leading to the inevitable showdown with the real Santa when he returns.

The Santa Clause 2 doesn’t pretend to be anything other than another flight of whimsy into the magical world of the North Pole, whilst bringing that “kids fantasy” element from the original film and putting a unique twist on it. Instead of the focus being on the kid discovering his father is Santa, the framing on the sequel delivered adults reaffirming their long-lost belief in the magic of the season, and for any adults out there who, like me, get a bit “bahh humbug” around the holidays, this is a film to kick-start that cold dead thing living where your heart used to be. There’s no deep or meaningful dramatic epiphanies to be had here; Santa Clause 2 is pure fluff, and a tasty fluff at that. Tim Allen’s winning portrayal of the Santa who didn’t want to be and then eventually does, trying to woo a woman who has truly lost the Christmas Spirit, coupled with the ongoing tete-a-tete with his ex-wife’s new partner, make the film a charming, unassuming, kid-friendly piece of magical cinema.

The story itself is pure Hollywood, and the cast all amp up their Christmas cheer as they go through the motions once more of being all wide-eyed and gooey at everything to do with the December holidays. Where I think this sequel truly shines above the original, though, is the way the film not just retreads the same ground as before, but actually improves on the themes and issues encountered in that earlier narrative. It’s truly rare to find a film able to do this successfully. Calvin’s search for a wife seems a bit presumptuous (really,… he needs to find a wife to make sure he keeps his Santa-bility?… oh yeah…. never thought to mention that before!), and the Toy Santa sequences do come off as a little more adult in tone than they perhaps should have, but kids and adult alike will lap up the simple, feel-good Christmassy spirit this film gives off. It’s not overly schmaltzy, it’s not cringe-inducing sweetness personified, and even the cute kid from the first film has grown up into a sullen, rebellious teen with all the accompanying problems that brings, so audiences can at least identify with one or two of the characters in the story.

Elizabeth Mitchell was a face I didn’t immediately recognise the first time I saw this film, although keen observers will remember her lusty turn opposite Angelina Jolie in the sexually charged Gia (I know I sure as heck do!); she brings the icy demeanor of the uppity school principal with just enough toughness to make her eventual transformation to Calvin’s love-interest believable and enjoyable. Her on-screen chemistry with Tim Allen feels real, and you get the sense they had a genuine rapport while making the film. Allen’s disarming style of humor once more allows him to effortlessly glide through this film on cruise control – he’s been here before, and his Santa schtick is yet to get old – and with the dual role of the “real” Santa and the Toy Santa giving him even more screen time, he doesn’t let us down. Eric Lloyd does tend to get a teensy bit whiny for my liking as the older Charlie (I’m glad they kept the same kid playing Charlie, and didn’t swap him out for somebody else between films), but overall his role is limited to a pretty standard retread as the first film. David Krumholtz essays Bernard again with that off-kilter frustration he does so well, while newcomer Spencer Breslin is actually pretty solid as Curtis, the North Pole’s resident inventor elf.

Production value plays an important role in any film set in the North Pole, at Santa’s ubiquitous Workshop, and Clause 2 is no exception to the value Hollywood plays on keeping the illusion alive for kids. The set design and costuming, specifically on the sequences in the North Pole, are sensational and truly epic, with an all-out Elf vs Soldier battle taking up the last reel looking like a miniature Braveheart. The visual effects are, as you’d expect, better than the original, and I must tip my hat in the direction of whoever it was that practically realized the film’s funniest character, “Chad”, the young reindeer in training for a career pulling Santa’s sleigh. Chad’s a scream, and kids will get the most laughs from the film every time he appears on screen – it’s silly and stupid, and adds nothing to the drama of the film (heck, it’s a Christmas movie, dammit, so it doesn’t matter) but Chad brings the film to life every time he chuckles his way through a scene. Also of great “cool” factor in this film is the addition of the Council Of Legendary Figures – including Cupid, the Easter Bunny, Mother Nature and The Tooth Fairy – the late Peter Boyle appears as Father Time, and grabs a few laughs, while Star Trek: The Next Generation fans will recognise Michael Dorn (sans Klingon makeup) as The Sandman: of all the Legendary Figures, it’s Art LaFleur as the Tooth Fairy who gets some awesome chuckles and is the best to watch.

The Santa Clause 2 is another of those rarest-of-rare artifacts in Hollywood: a sequel as good as, if not better than, the original film. The return of the original cast was of particular importance to this film’s success, because had any of the character been played by different actors, I think the disconnect with audiences and the beloved original film would have been fatal. Lembeck’s direction is spot on, his sense of timing and use of framing (especially while Scott is wooing Carol – yes, Santa’s wife is named after a song around Christmas…. a “carol”… get it?) are all  wonderfully charming, and the story is simple and engaging. There’s no smarm or snarky humor to be found, no modern anti-establishment sarcasm aimed at the cliches of the season, and for this, I think the Clause films struck a winning formula head-on. The Santa Clause 2 is both a wonderful sequel, and a wonderful Christmas movie in its own right.