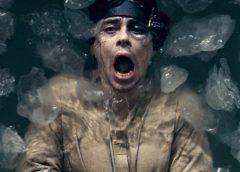 Director : Joe Johnston
Year Of Release : 2010
Principal Cast : Benicio Del Toro, Emily Blunt, Anthony Hopkins, Hugo Weaving
Approx Running Time : 118 Minutes (Unrated Version)
Synopsis: Returning to his ancestral home in rural England, after his brother is killed by a mysterious beast, Lawrence Talbot must seek to find the killer, and hunt down the beast before it kills again.
What we think : Critically lambasted horror flick, yet another re-invention of a Universal Monster, lacks emotional depth but more than makes up for it in gory, gruesome killing and some worthwhile scares. Not quite as frightening as it hopes to be, and yet nowhere near as terrible as many critics made it out to be either, The Wolfman will appeal to fans of the genre, but is probably best left alone by causal viewers.

There’s little doubt that Lon Chaney’s portrayal of the original Wolf Man, in Universal’s 1941 classic of the same name, remains one of vintage Hollywood’s enduring images of it’s foray into horror. Alongside Bela Lugosi’s Dracula, Chaney inhabited the role and made audiences freak out with his stylish portrayal of a man haunted by his own demonic nature – director Kurt Waggners direction in 1941 was, for its time, astonishingly cool for use of shadow and editing, although in the years since perhaps that shine has faded somewhat. What remain undeniable, however, is that Hollywood’s fascination with creatures of myth and legend have remained very much in the eye of the modern storm, as years of True Blood and Twilight (to name but two) have taught us. Universal has previously updated its classic stable of monsters with Stephen Sommer’s adventure film The Mummy in 1999, as well as its immediate sequel, the success of which also prompted Universal to tap Sommers to update their Dracula legend in the vastly underwhelming (and fatuously stupid) Van Helsing. Years have passed, and the kind folks at Universal have cautiously allowed yet another of their classic monster icons to be given a touch-up by modern technology – this time, it’s the werewolf in all of us – The Wolfman. With the passing of time and the desensitization of audiences to wanton violence and gore, would an update of a classic have audiences still screaming in their seats, or would the bite of Wolfy’s fangs be merely a toothless, last-gasp attempt to resurrect a dying genre?

Lawrence Talbot (Del Toro), a famous actor working in London, return home to his estranged father after his brother is killed by a mysterious creature. Sir John Talbot (Hopkins) currently resides in his massive estate with his elder son’s fiancee, Gwen (Blunt), and resident manservant Singh (Art Malik, a long way from playing the bad guy in True Lies, and all but impossible to recognize beneath an enormous fake beards and wig) – seemingly oblivious to the gossip spreading amongst the fine folks of Blackmoor. They believe the Talbot family to be cursed, and are unsure of exactly what manner of creature stalks the moors. Lawrence, seeking answers to his brothers death, visits a local gypsy camp to see a wise old woman (aren’t they all, though?) when it comes under attack by a giant wolf-like creature. After a brief pursuit, Lawrence himself is attacked and bitten by the creature, resulting in him slowly becoming one of the creatures as well. From there, it’s a gradual descent into madness, fiery torches and pitchforks, and plenty of full-moon action. Famed Jack The Ripper detective, Inspector Aberline, arrives in Blackmoor to seek out the creature for himself, and encounters far more than he bargained for.

Watching this film, in it’s “unrated” version, as opposed to the theatrical version the majority of audiences saw it as, it’s hard to understand just why The Wolfman garnered so much animosity by critics. Perhaps, like I often do, they missed the point of this film, looking at it as a comparison to the classic original, and finding it doesn’t live up to their expectations. Just what those expectations are, I’ll never know, but The Wolfman more than acquitted itself as a relatively decent horror/action flick in my eyes. Sure, there’s a few problems with it, and some of the scenes and story points become a tad laboured after a while, but the film never intended to  be a thinking persons horror film in the first place. This is a pure, dark scary adventure yarn, a story of fate and the inhamanity of man, manifested within the body of a ranging, bloodthirsty beast. The pop-psychologists have always had a field day with Hollywood’s attempt to spin moral fables via monster movies, somehow trying to represent a side of us as a species that lurks below the surface like a bubbling poison, yet I believe they’re all looking in the wrong direction. People just want to have the shit scared out of them every so often, and monster movies are the perfect way to do it. Some would say watching a Katherine Heigl film might be a more serene way to frighten oneself, but sitting in the dark, with shadows and dimly lit shapes flying across the screen to the banshee wail of a thunderous 5.1 soundtrack, is even better. I tend to agree.

Lon Chaney aside, Benicio Del Toro was born to play the Wolf. I don’t think I’ve seen more perfect casting since Jack Nicholson’s version of a were-wolf in the aptly named Wolf, although I tend to think the underlying subtext of that title was more in Jack’s penchant for beautiful women than anything else…. where was I? Oh yes. Del Toro looks like a wolf anyway, his dark, brooding eyes and surly looks make him the perfect candidate to lead this film, and I think he pulls it of wonderfully. While the script tends to make him seem somewhat awkward, somewhat ambivalent to the events unfolding before him, his personification of a man tormented by his inner demon elevates this film beyond a mere creature-feature. His accent does waver a little (his background is Puerto Rican, and his thick accent in other films made me question his ability to be understood in a thoroughly English rendition of this story) but he more than holds his end of the bargain as Lawrence Talbot. Creepy Anthony Hopkins returns to the screen again (God, this is freakin’ Hannibal Lecter’s evil third cousin here!) in a suitably amorphic portrayal of Lawrence’s father, John. Hopkins dons the beard and soothing platitudes of a man drunk on his own power, winking at his son (and us) at one point as if he knows the whole thing is a big laff, and going full pelt with his insanity anyway.

Elrond himself appears as Francis Aberline, the very same Scotland Yard detective who took on the Jack The Ripper murders in Whitechapel in 1888, a few years prior to this film’s time period. Sporting a stylish beard and cool Victorian-era jacket, Elrond gives a fairly one-note performance in the requisite “oh my god the monster is real” character he’s sent in to portray, but he gives it all he can in light of a fairly lean part. There’s a snazzy twist in this films’ tale (tail?) with regards to Aberline, and while I tend to think a sequel was thought of while this film was in production, the effect is, nevertheless, a nice touch to the monster films of old. Emily Blunt plays the female love-interest here, although since she’s the bereaved fiancee of Lawrence’s own brother, for him to have an attraction to her seems somewhat… icky… at best. Still, I can see what the filmmakers were trying to get to here, it’s just that overcoming this somewhat incestuous narrative arc leaves a bitter aftertaste. Blunts portrayal of Gwen is a baffling mix of weepy, hand-to-face-fainting Lady and solidly resolute action heroine type, all of which does little to imbue her with a sense of purpose or actual depth of character. She’s a story hinge, little more than a plot device sent to pivot the story on when things slow down.

Anybody expecting Shakespeare from this film should sod off now and don’t look back. I say that, with the irony being that the opening scene involves a performance of Hamlet by Lawrence, in terms of the fact that this isn’t a film hell-bent on intellectual stimulation of any kind. It’s a genre film, complete with blood, shadows and scares, and tries its utmost to deliver all three in equal measure. I can’t critique the differences between the Unrated Version and the original theatrical edition, save what I read online, but the Unrated version does seem to have a few scenes that, by comparison to the rest of the film, are somewhat ponderous. I assume that in films such as this, the first scenes to go are the ones where characters are built, so that the audience can get to the killing and maiming quicker, but I struggled to find any real fat on the films surprisingly speedy narrative. As I mentioned, some scenes are more slowly paced than others, but figuring out how they might have been cut down is hard to fathom. The script isn’t keen on overt character development or a sense of humor, instead going for the jugular (literally and figuratively) with it’s dark, foreboding style.

Joe Johnston is a director more than capable of making a quality film: his entry into the Jurassic Park franchise with the third film outdid Spielberg’s original and the lame-duck second for scares, action and thrills – while Jumanji remains at the top of my kid-film-for-adults list. He gives Wolfman the energy and impact the story needs to make audiences jump, and his handling of the jump-cut-shock scare moments is exemplary. You see one coming, before another double-clutches in front of you and you’re throwing your popcorn skyward. Johnston does action well, as he’s proven before, and here it’s no exception – he eschews the gratuitous slow-motion glaze of recent Hollywood fare to deliver a pulsating, muscular action aesthetic that will excite and, as a good movie should, entertain. Whether it’s your cup of tea or not, The Wolfman is a loving update of a classic film, a classic genre, and delivers the scares and gore it needs to keep itself “fresh and modern” for the Facebook generation. While the film does tend to skip key moments in logic, and sidestep little things like common-sense or realism, it’s one of those movies where thinking about it will lessen your enjoyment – just go with it and enjoy.

Blood will run, defenestrations will occur, and fur will fly, as The Wolfman roars onto your screen in a style we’ve been robbed of via the latte clones of Twilight. This is hulking, menacing horror, a far cry from Taylor Lautner’s shirt-off technique, and a nicely made throwback to genuinely atmospheric film-making. Shadows and darkness envelop this film, pushing aside the well-lit teen-angst modern “monsters” seem to enjoy and delving into a shallow end of human madness with glee. Yes, it’s got its faults, and sure, it’s not the bloody horror we’ve been accustomed to since Eli Roth stepped behind a camera, but what it does, I believe it does well. Others may disagree, but I enjoyed The Wolfman more than I expected. Perhaps my overall score is higher as a result of that expectation being met, but the point remains: The Wolfman does indeed have bite, if you’re prepared to take the journey.