Director : Tim Burton
Year Of Release : 2009
Principal Cast : Johnny Depp, Mia Wasikowska, Helena Bonham Carter, Crispin Glover, Voices of Alan Rickman, Timothy Spall, Christopher Lee, Michael Gough, Michael Sheen, Stephen Fry.
Approx Running Time : 108 Minutes
Synopsis: Alice returns to Wonderland, on a quest to defeat the Jabberwocky and save the land from the evil clutches of the Red Queen. Along the way she reunites with the Cheshire Cat, The Mad Hatter, Tweedledum and Tweedledee, and the pot-smoking caterpillar.
What we think : Visually stunning, yet emotionally vacuous, Alice In Wonderland again seems a better idea in theory than in actuality. Tim Burton remains one of cinemas most unique visualists, but his ability to convey true emotion on the screen remains patchy at best.

I’m not sure which is better, the idea of Tim Burton directing something, or the realisation of that idea. Personally, I’d go with the former, rather than the latter. It seems to me that while Burton is capable of delivering some truly awe-inspiring visual ideas, when it comes to characters and actually getting them to emote, he’s a little bereft of success. Films such as Sleepy Hollow, Big Fish, Planet Of The Apes, Sweeney Todd and most recently Charlie & The Chocolate Factory have all been astonishing projects for their complex visuals, but have nominally left us wanting on an emotional level. The ideas and concepts in his film are often unsupported by character development beyond the cartoonish, and his inability to direct truly straight material may stem out of this. In any case, I was, like the majority of the Western world, keen to see how he did with a right-up-his-alley-weird Alice In Wonderland remake. 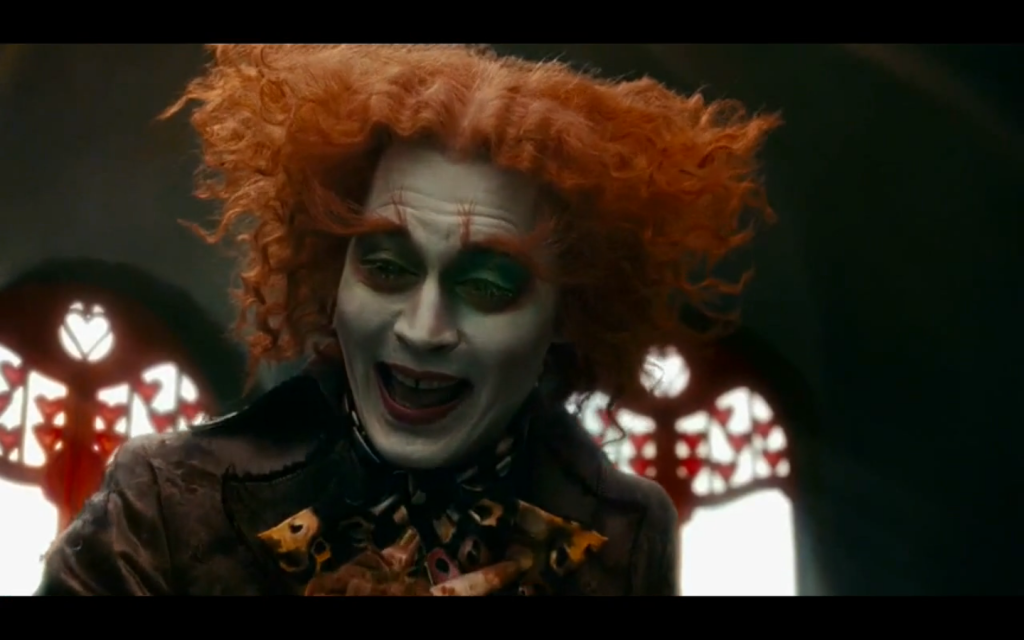 With eyebrows like this I don’t NEED to act!!!

In the interests of complete review disclosure, I’ll state right now I don’t really like the Lewis Carrol story of Alice and her zany adventures in loopy land at all. The Disney cartoon version, the version most of us have come to know the story through, is a gorgeous sample of art and animation, but as a story, rings hollow to me. I don’t see what the big deal is, what the appeal is, of a young girl forced to endure idiotic conversations and cruel, unhinged characters, in the name of a story. Why this story has appealed to filmmakers and audiences for years is also beyond me, because I can’t seem to “get” it. But as with any story of the magical or bizarre, Tim Burton’s kooky imagination was always going to do it the most justice, at least, visually anyway. So I approached this film version with a sense of impending “meh”.

Based on both Alice’s Adventures in Wonderland and Through The Looking Glass, the books by Lewis Carroll, Burtons Wonderland is indeed a magically fair-tale place. Burton’s sense of style and whimsy come to play big-time here, his iconic designs making yet another reappearance (can the man not make a tree look like an inverted twister?), but once again, the emotional weight of the character goes unrealised. There’s plenty to enjoy in the film, but the suffocating level of style over substance eradicates any true feelings for what’s going on on-screen. 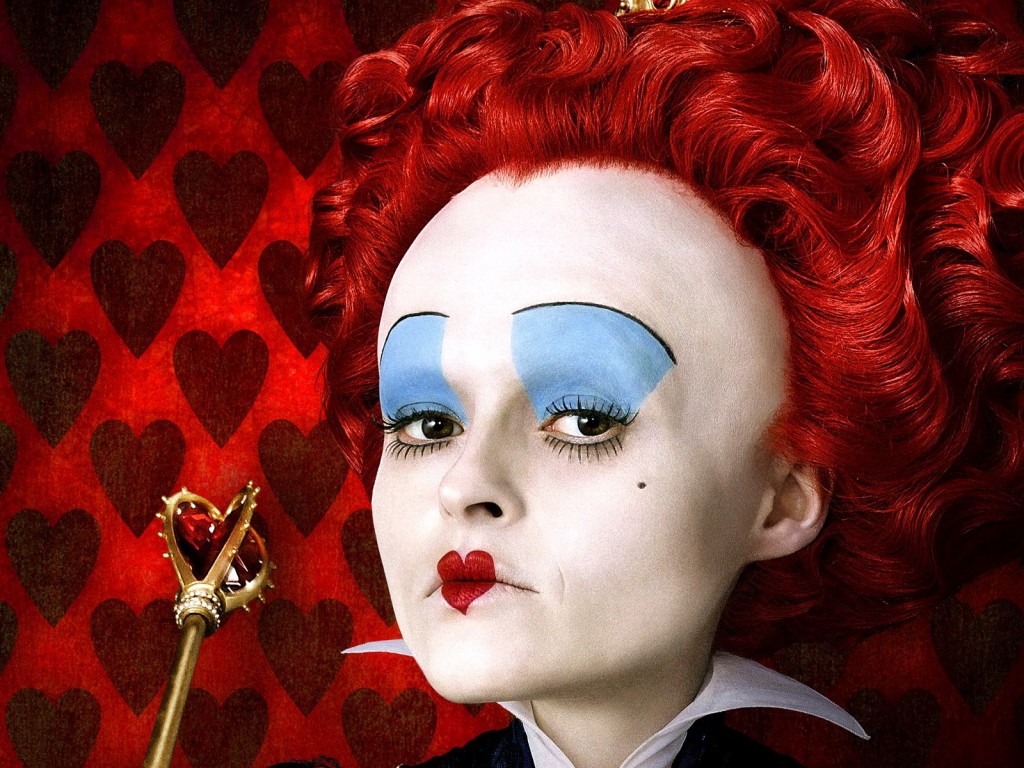 Even my poo is shaped like a heart. That’s how predictable I am.

Alice (the incredibly hard to pronounce and type Mia Wasikowska, a young Aussie girl who’s made good) is stuck in a life she doesn’t like: she has a recurring dream of being in a strange world where everything is topsy-turvy, while at the same time being stuck in a world that is increasingly alien to her – the real world. When she follows a strange white rabbit in a waistcoat while escaping an unwanted marriage proposal, Alice tumbles down a hole beneath a tree and ends up in a place called Underland, populated by some of the most unimaginable creatures… imaginable. At first, Alice is convinced her journey is all a dream, and resists the fact that she’s actually been in Underland before. After meeting a sword-wielding dormouse, a couple of podgy young lads known as Tweedledum and Tweedledee, and a bespectacled dodo, she is taken to meet a man known as the Hatter (Johnny Depp), who hides her from the evil clutches of the Red Queen (Helena Bonham Carter) and her henchman, Stayne (the always creepy Crispin Glover). It seems the return of Alice is something of a prophesy to Underland, since she is destined to battle the dragon-like Jabberwocky and return the good White Queen to her rightful place as ruler of this world. Alice isn’t keen on the idea, as she doesn’t see herself as any kind of hero. But, through the actions of those around her, she soon succumbs to her destiny and eventually, finds her way into battle for the survival of Underland. 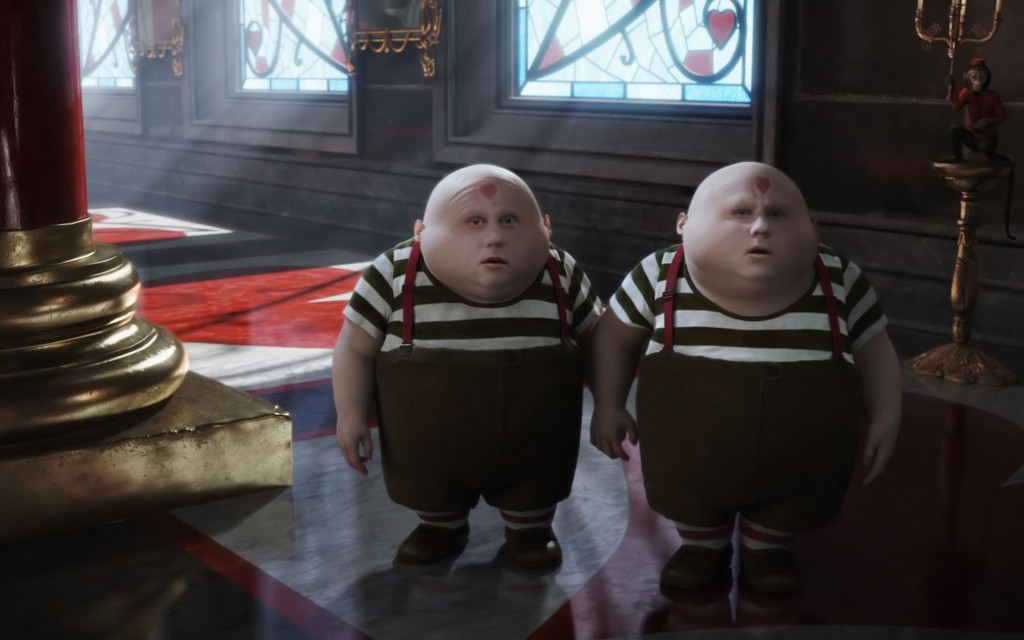 The one redeeming thing Tim Burton has to work with in his projects is credibility, and this allows him to draw in the most talented people to utilise. Burton alums Bonham Carter, Alan Rickman (as the voice of the chain-smoking caterpillar Absolem), Timothy Spall (as Bayard, the bloodhound tasked with tracking Alice), Michael Gough (as a dodo bird) and Christopher Lee (as the voice of the Jabberwocky) all join in the fun, although it’s star Depp and relative newcomer Wasikowska who have the most work to do. Acting to blue-screen and CG characters must have been hard for the young girl, but Mia performs admirably against some of literatures most iconic creations. Depp, meanwhile has a bulked up Mad Hatter role to contend with, and while initially he seems overly effeminate and queer, eventually the part suits him like a glove. The Hatter is, unfortunately, the least appealing and involving of all the Underland characters, but Depp brings a sense of forlorn melancholy to the madness, creating a truly unique cinematic entity in itself. Of particular note is Helena Bonham Carter’s wonderful rendition of the Red Queen, whose constant order “Off with his head” rings out throughout the film, often bringing a wry smile to this reviewers face. She appears to have been given the best character development, her role as a purely tyrannical one smoothed down to a more sympathetic villain. Glover, as Stayne, delights in roles like this, and he plays it to the hilt, rolling eyeball and grimacing jawline all working in complete synchronicity with the tone of the film. An extended cameo by Anne Hathaway as the White Queen rounds out the major roles. 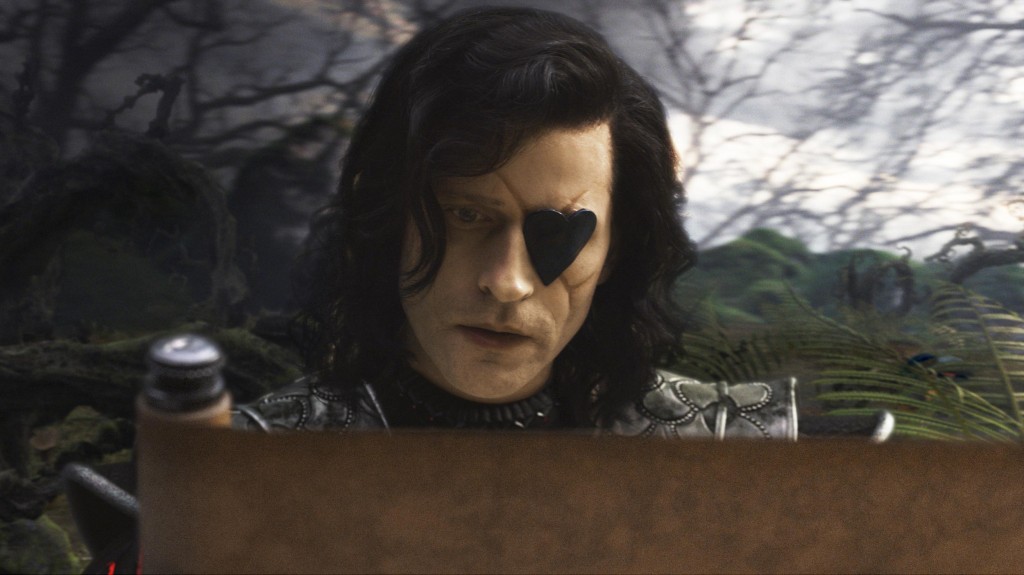 The basic premise of the Carroll story is there, it’s just had some Burton-esque embellishments laid over the top in thick, goopy wadfuls. The production design, from the costuming down to the details in the background CGI sets, is remarkable. The film is so chock full of eye candy and delightful concepts that you can almost forgive a little lightness in the dramatic storytelling. Almost. Alice, as a character, is underwritten and lacks true energy, a facet derived from a thin script and not from Mia’s performance. Mia is luminous as Alice, and while not a patch on, say, Milla Jovovitch in the action-girl stakes, holds her own among the CGI-infested scenery. Linda Woolverton’s script seems more intent on the visuals, rather than the action and characters, which leaves Burton plenty of time to show us cool computer graphics without really giving us anything to care about. To say I was disappointed with Alice In Wonderland would be to say I didn’t enjoy that root canal last year. I didn’t, but that’s the problem with root canal surgery. Wonderland should have been a trippy joy, a journey to a fantastic world of imagination and fancy. My wife, Lisa, asked me while we were watching if Walt Disney would have minded that the story was so dark and brooding; she postulated that he’d have been disappointed in the way the story was adult-ed up to suit a more modern, violence-attuned audience. I tend to agree, because a fair amount of stuff in Wonderland isn’t suitable for kids, at least not young children anyway. Those who might have giggled through the Red Queen’s armies chasing Alice through the forest in Walt’s animated original, would be aghast at the bloodthirsty methods and overtly nasty tone put out by Burton in this film. I dare say Walt may not have been pleased. 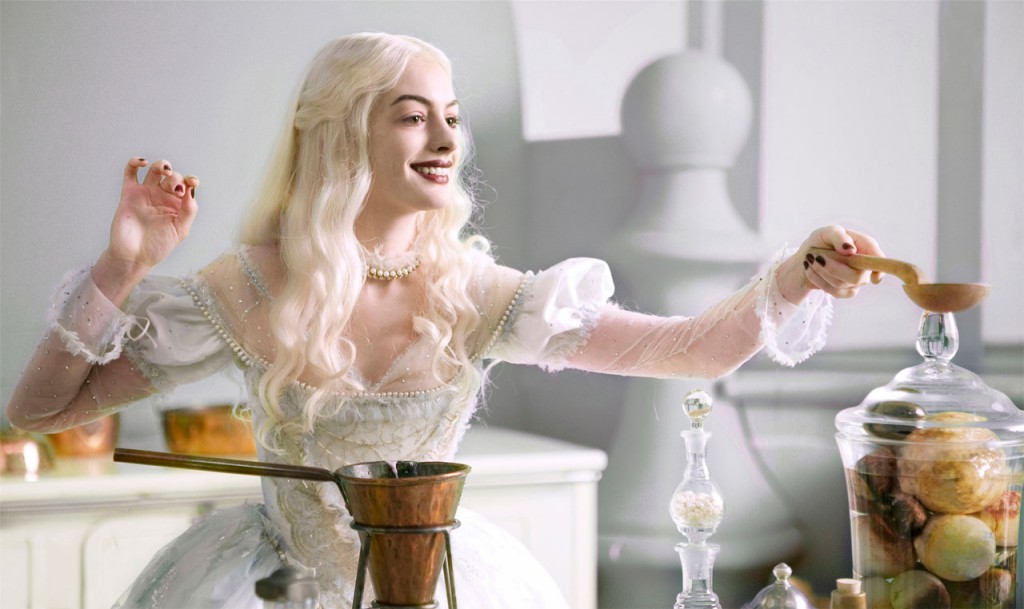 Really? I HATE how hard it is to get stains out of this damned dress!

As a film, I guess it’s fair to say that Alice In Wonderland achieves its goals: it’s designed to entertain the middling masses, to sell more fast food in cross promotional campaigns, and look cool on a big screen. Indeed, it does everything asked of it…. except, perhaps, entertain. Flat characters and a lack of empathy towards the audience, along with an obtuse sense of the bizarre, make Wonderland hardly wonderful and more like a holiday you can’t wait to get away from.