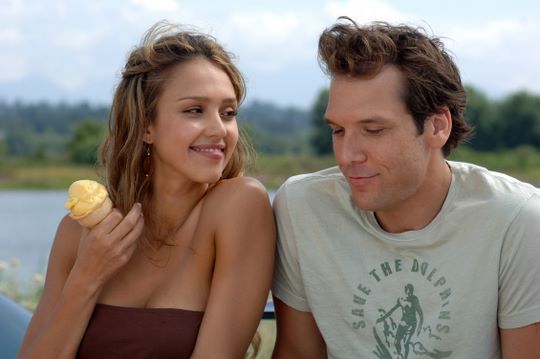 Director : Mark Helfrich
Cast : Dane Cook, Jessica Alba, Dan Fogler, Lonny Mark Ross, Chelan Simmons, Ellia English, Annie Wood, Jodie Stewart, Michelle Harrison, Jodelle Micah Ferland.
Year Of Release : 2007
Length : 90 Minutes
Synopsis: After refusing to kiss a goth girl at a party during his childhood, Chuck is cursed to always miss out on love. As a man, he finds that he has become a lucky charm of sorts, with every single woman who has ever dated him, marrying the guy they’ve dated next. So when Chuck falls for Cam (Jessica Alba), he’s afraid that if he becomes involved with her, she’ll find another man, something he’s not capable of dealing with.
Review : Hilarious romantic comedy sometimes oversteps the bounds of crudeness, but has at it’s heart a great little story. Starts well, sags in the middle when the main character flips out, but recaptures its warmth by the end, Good Luck Chuck isn’t a film you’d watch with your mother in the room, but it is more often than not quite hilarious.

It’s perhaps a sad fact of life that these days, vulgarity and crudity seem to be the order of the day in the majority of Hollywood films these days. Comedies, in particular, appear to be the most affected, with a subtle (or not so subtle, if you’re watching carefully!) increase in crude humour being injected into even the most benign of stories to amp up the “edgy” factor. Most of this is a result of the resurgence in crude humour brought on by American Pie and it’s ilk, and film-makers seem content to make more and more raunchy films to draw in the teen boy demographic. Your tolerance for this kind of film will depend on whether you find jokes about sex, farts and animals acceptable, and by that I mean whether concepts such as eating your own poo are socially okay.

Good Luck Chuck would have been a great film even if it hadn’t been filled with so much filthy dialogue. Chuck, Dane Cook in hyperactive comedy mode, is every woman’s fantasy: when a woman dates him, and then leaves him, they’ll marry the very next man they date. Which is great for them, but not so great for Chuck, who’s looking for a committed relationship, not a string of one-night stands. When he meets Cam (Jessica Alba) at an ex-girlfriends wedding, sparks fly, and Chuck resolves to ask her out. Unfortunately, at the same time, he and his best friend Stuart (Dan Fogler) discover just what a lucky charm he is to women. Stuart encourages him to look at the positives of this, in that women seek him out so that they can marry the next bloke they find, so he can have as much casual sex with numerous hot women as he wants: every man’s dream. Worried that his “curse” may end up causing Cam to find another man, which Chuck isn’t prepared to accept, he tries a few different methods to ensure he remains the only one she dates.

Let’s begin with the good. Dane Cook, who hasn’t done anything really good since… well, ever, is a charming central figure in this film. It’s our sympathy towards his plight that gives him his charm; after all, his curse begins early on, when he’s a kid, and so technically he can be forgiven a little hubris when he discovers this “power” he has. Jessica Alba, always gorgeous, looks a little hard pressed to maintain the comedic tone of the film, and she’s overwhelmed by the supporting cast. She really comes across as a little miscast, although I tend to think her character is a little underdeveloped, or even underwritten, and it drags the film down a little. Dan Fogler, who regular readers will remember from my review of Fanboys, and who also appeared in Balls Of Fury, is wonderfully funny as the gross, vulgar best friend, his misogynistic view of women (perhaps developed by incompetent parenting) and seemingly incredible ability to be a plastic surgeon specialising in breast augmentation stemming from his spectacular sex-drive. The fact that he struggles to get laid, while Chuck is fending them off with a stick, is something that provides a lot of humour in the film. Fogler’s performance borders overkill, but never steps across that line too often.

The scripting follows the Hollywood formula of scriptwriting a romcom: man with issues falls for perfect woman, they eventually get together only to separate (due to an external third party problem, or perceived problem) before overcoming their issues and making up just before the end credits roll. It’s predictable, and ultimately, unsurprising. The winning performances from the main cast overcome the stereotypical plotting, although just barely. Director Mark Helfrich gives us enough funny stuff to get past the lack of genuine characterisation and narrative depth. Some wonderful ad-libs by the cast also help.

The film does have a number of failings, though. First, there’s the strange duality in tone between warm-fuzzy comedy and filthy, debauched sex romp. On the one hand, the chemistry between Cook and Alba is wonderful, mainly due to Cooks winning smile and affable personality. They are charming, a lovely due, and their scenes together smack of a warmth and effortlessness that many screen couples take ages to get right. But the vulgarity on either side of them drags the film through a moral and ethical mud-pile, and it never really recovers. Filthy slut-women, all seeking a quick sex-session with our main man for their own proclivities, and a nasty snipe at people with physical issues (like giant fat people!) gives this once pleasant film a somewhat dirty overtone. While not entirely without comedic merit, sometimes the crude humour goes a little too far, in the opinion of this reviewer and his wife. The balance between telling a good story, artistic merit and outright exploitation is a little wonky in this film.

The main failing of the film, from a narrative point of view, is the decidedly overblown central act. Chuck discovers that his “curse” still exists after he sleeps with Cam thinking it’s not, and goes into a manic, Jim Carrey-esque romantic Romeo character that shatters the previously held concept of his character. It’s so off the wall, so not in keeping with the rest of the film, it takes you out of the film, and this is disappointing. Cook brings it back by the end, though, so he’s somewhat redeemed, but this middle section of the film is unbelievable even for this magic-inspired romcom.

But, for a film which features a glorious montage wall of Chuck’s sexual encounters, a three breasted woman and a dove killed by a bouquet of flowers, as well as ball biting penguins, Good Luck Chuck has just enough going for it to be entertaining in a way I wasn’t expecting. I put this film’s poster into my 2009 Worst Film Posters update last year, based on it’s idiotic Lennon/Ono photo riff, yet my fears for the content of the film were unfounded. It’s funny enough to be charming, crude enough to be edgy, and has a heart that beats just below it’s schmaltzy, by-the-numbers script which elevates it above the normal dreck we are given to watch.