Cast : Ben Stiller, Jack Black, Robert Downey Jr., Matthew McConaughey, Tom Cruise, Brandon T Jackson, Nick Nolte, Steve Coogan, Jay Baruchel.
Synopsis: When the cast of the latest action movie, Tropic Thunder, are inadvertently sent into battle with real live bad guys, they must overcome their blatant differences and save the lead actor from being sequestered to spend the rest of his days re-performing his role in one of cinema’s most awful films.

I’ll bite, I usually detest anything Ben Stiller has to do with. I loathed the “hilarious” Meet The Parents/Fockers series, I barely made it through Zoolander, abhorred The Heartbreak Kid and avoided entirely Along Came Polly, Envy and Duplex. The only films Stiller has appeared in that I have found worthwhile are Keeping The Faith, and Dodgeball, both of which are highly entertaining on levels other than simply Stiller. Mystery Men was great, however, Stiller was not. He’s always been a comedian of limited range and scope, perhaps in a similar way to Jim Carrey in that he’s a one note joke the majority of the time. Whereas Carrey has managed to eke out a dramatic career for himself as well, Stiller has, to the best of my knowledge, yet to do so in a convincing way. Keeping The Faith was perhaps the best example of him in a more straight role than an out-and-out comedy. 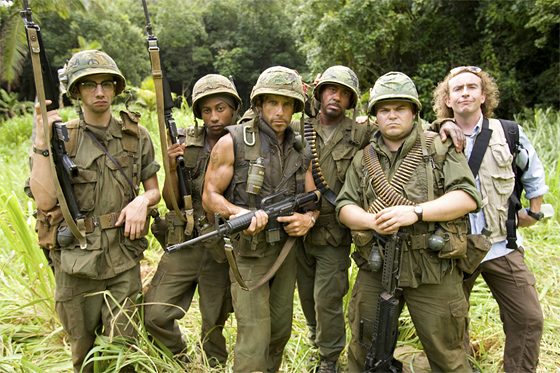 Thankfully, though, Tropic Thunder doesn’t solely rely on the comedy stylings of Stiller, and his wimpy, idiotic blitherings. Stiller plays the put-upon hero so well, he can do it with his eyes closed. In Tropic Thunder, that character is present, but not overwhelmingly so, and the film is the better for it. With one eye on the character, and one on the camera, Stiller both acts and directs this enormously successful comedy epic. And, in what is for me a genuine shock, the film is actually pretty damned good. Tropic Thunder is one of those ensemble action films which take the mickey out of Michael Bay, Apocalypse Now, almost any Bruce Willis flick and even, if my film knowledge serves me right, a little of Forrest Gump. 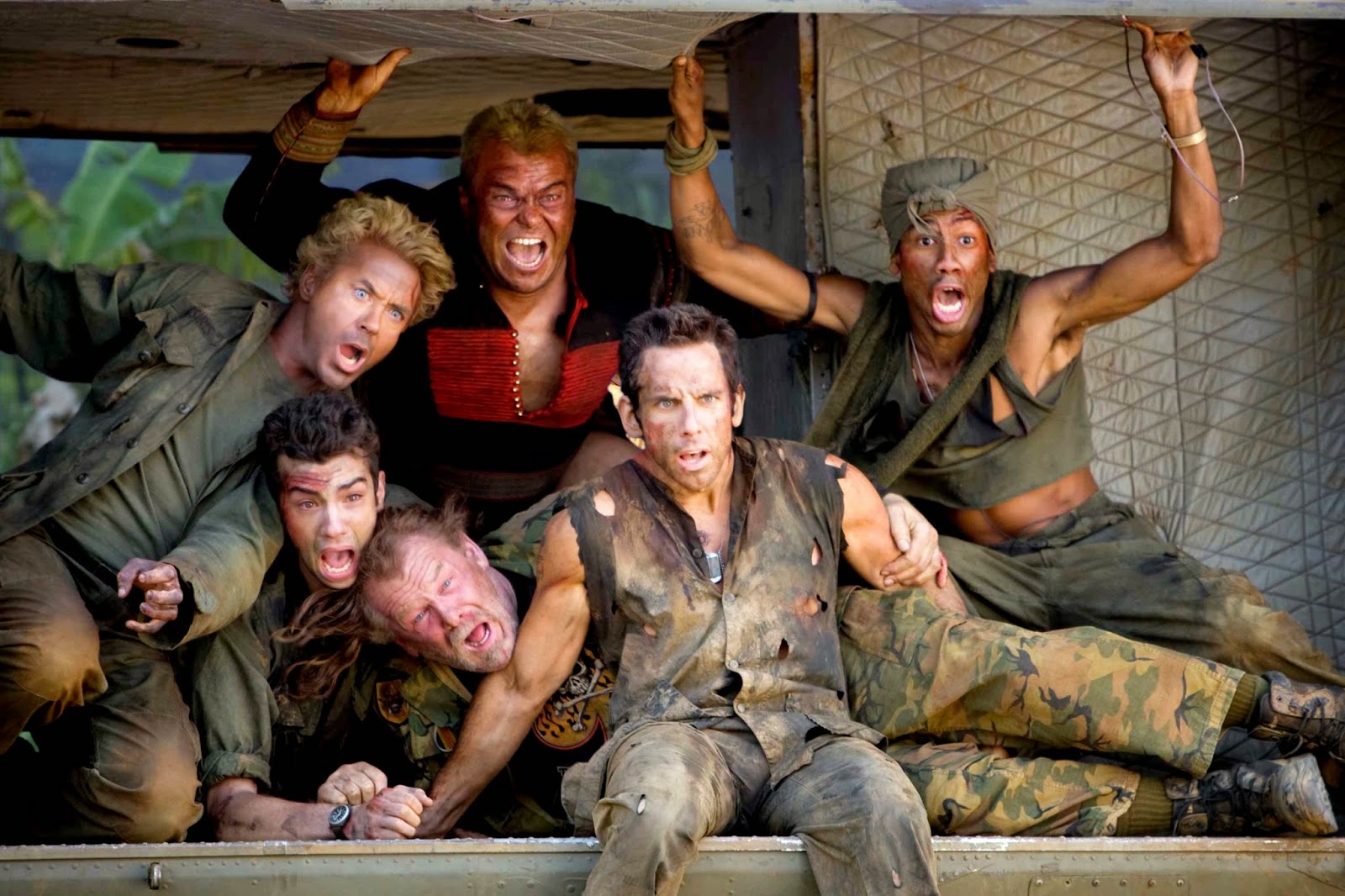 Stiller plays Tugg Speedman (yeah, I know), an action hero basking in past glory, now seeking to resurrect his career by making a film with a bunch of other “stars”, five time Oscar winner Kirk Lazarus (Robert Downey Jr.), an Australian actor who undergoes a skin pigmentation procedure to enable him to portray his characters African-American  background, Jeff Portnoy (Jack Black), a washed up Eddie Murphy style “comedian” who insists on making films in which he plays every character (a tip of the hat to the Nutty Professor films), and a genuinely black Alpa Chino (played by Brandon T Jackson, no doubt including the T to emulate Samuel L Jackson), a rapper trying to instigate an acting career (a lot like 50 Cent) whilst promote a new lone of crazy energy drinks. When the studio funding their latest war picture threatens to cut the funding, director Damien Cockburn (Steve Coogan) decides to utilise the “shoot realistic” tack, and throws his cast out into the jungle to film them guerrilla style, to save both the film, and money, using Big Brother style camera placements to film them in a realistic situation. The problems really begin when real live Vietnamese drug barons discover the group of actors (armed only with weapons filled with blanks) and assume they are real American soldiers, and go as far as to take Speedman hostage.

Back in Hollywood, a wonderful Matthew McConaughey plays Speedman’s agent, Rick Peck (known in the industry as Pecker), who, after a slight miscommunication with his idiotic star performer, goes on an angry rampage to the studio demanding installation of Tivo to Speedman’s house, under the Tropic Thunder contract. The studio boss, Les Grossman (Cruise), an overweight, balding dictator with a gutter mouth, calls down the thunder upon Speedman and the film, essentially casting the film aside and hoping the insurance will cover the costs and provide a slight windfall of profit. 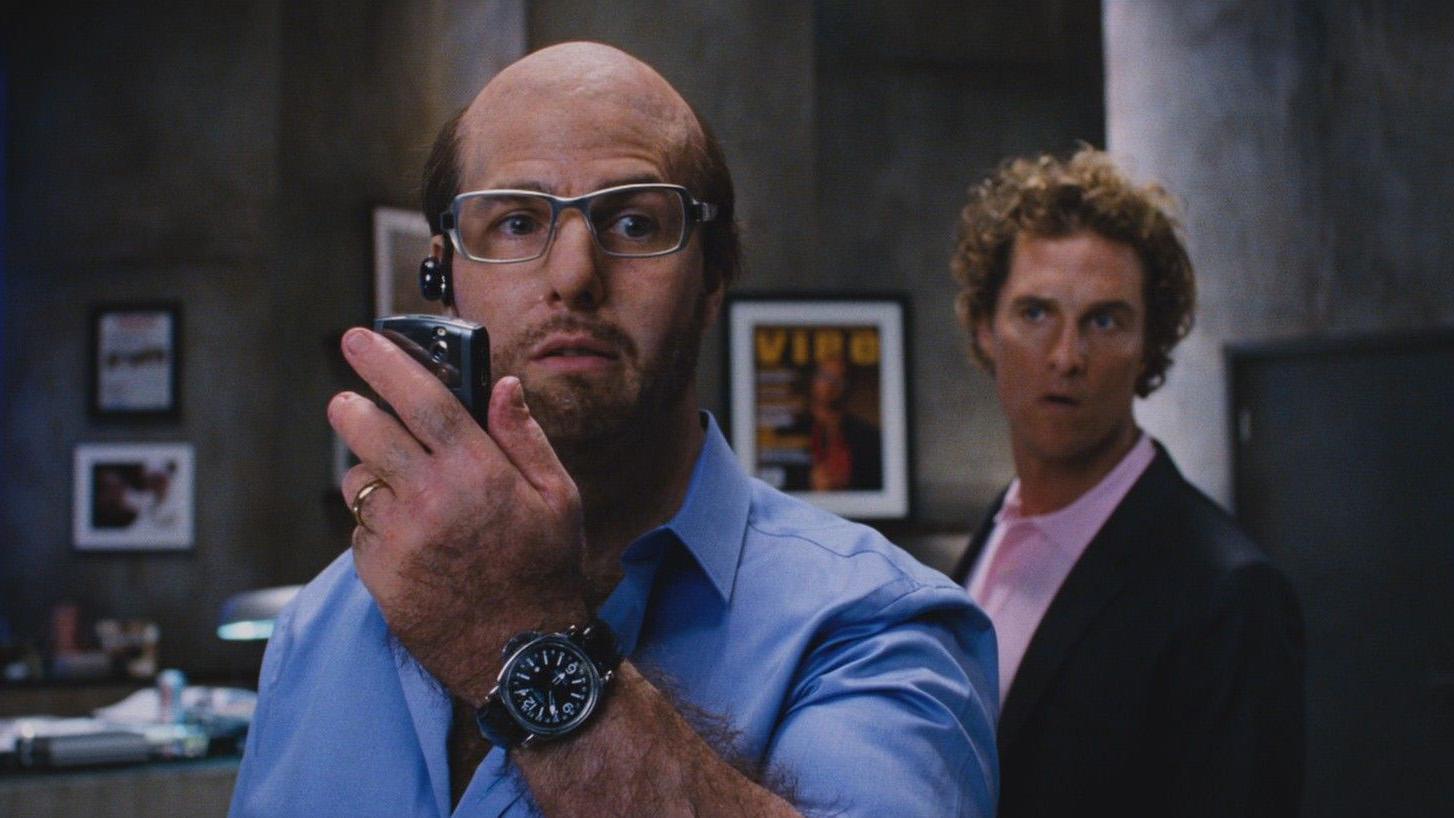 The film begins with a series of faux trailers, for films “starring” the actors of Tropic Thunder, Speedman in his action-film roles, Lazarus in his “serious” Oscar bait films, and Portnoy in yet another “fat people in a dysfunctional family with fart jokes” movie. All are utterly hilarious for their lampooning of Hollywood cliché, a decidedly acidic look at how Hollywood approaches serious issues and comedy with the subtlety of a brick to the head. The film begins properly with a massive action sequence being filmed for the new action blockbuster, Tropic Thunder, set in Vietnam. Explosions, devastation and massive homage’s to Apocalypse Now, Platoon and other classic war films roll along, until we get to one of those moments where the two lead cast have to emote to each other in a classic Michael Bay-esque moment: histrionic overwrought acting, stirring music, slo-motion violence in the background, and a sense of the chest beating, flag waving patriotism that comes with the US army fighting evil around the world. unfortunately, the scene is ruined because Speedman, a wounded soldier trying to tell his second in command that he…. sniff… loves him…. sniff, cannot cry. 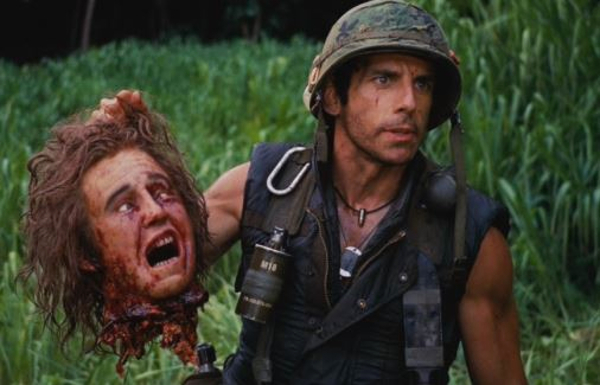 From there, we revert back to a sardonic, slyly written poke at the Hollywood machine, from frustrated directors, belligerent studio heads, anarchic effects guys, and some of the most diabolically sycophantic hangers-on yet committed to the screen. The script is just wild enough to evoke gales of laughter at moments, and then to be bravely controversial at others: that uncomfortable humour Stiller usually does so well/badly is here in full force, with a plethora of politically incorrect jokes being slung at the audience in quicktime. Controversy followed Tropic Thunder for it’s use of the world “retard” in conjunction with a monologue about different film performances in the past (Dustin Hoffman in Rain Man, Tom Hanks in Forrest Gump), which, I guess, is legitimised with the rather cavalier way the actors bandy the word about. However, taking that into consideration, there’s very little about Tropic Thunder that isn’t funny. Gross out humour, slapstick, broad comedic dialogue, awkward humour and fart jokes abound, as well as a gentle (and then again, not so gentle) skewering of many action film conventions, most of which we now look at with a certain amount of fondness. 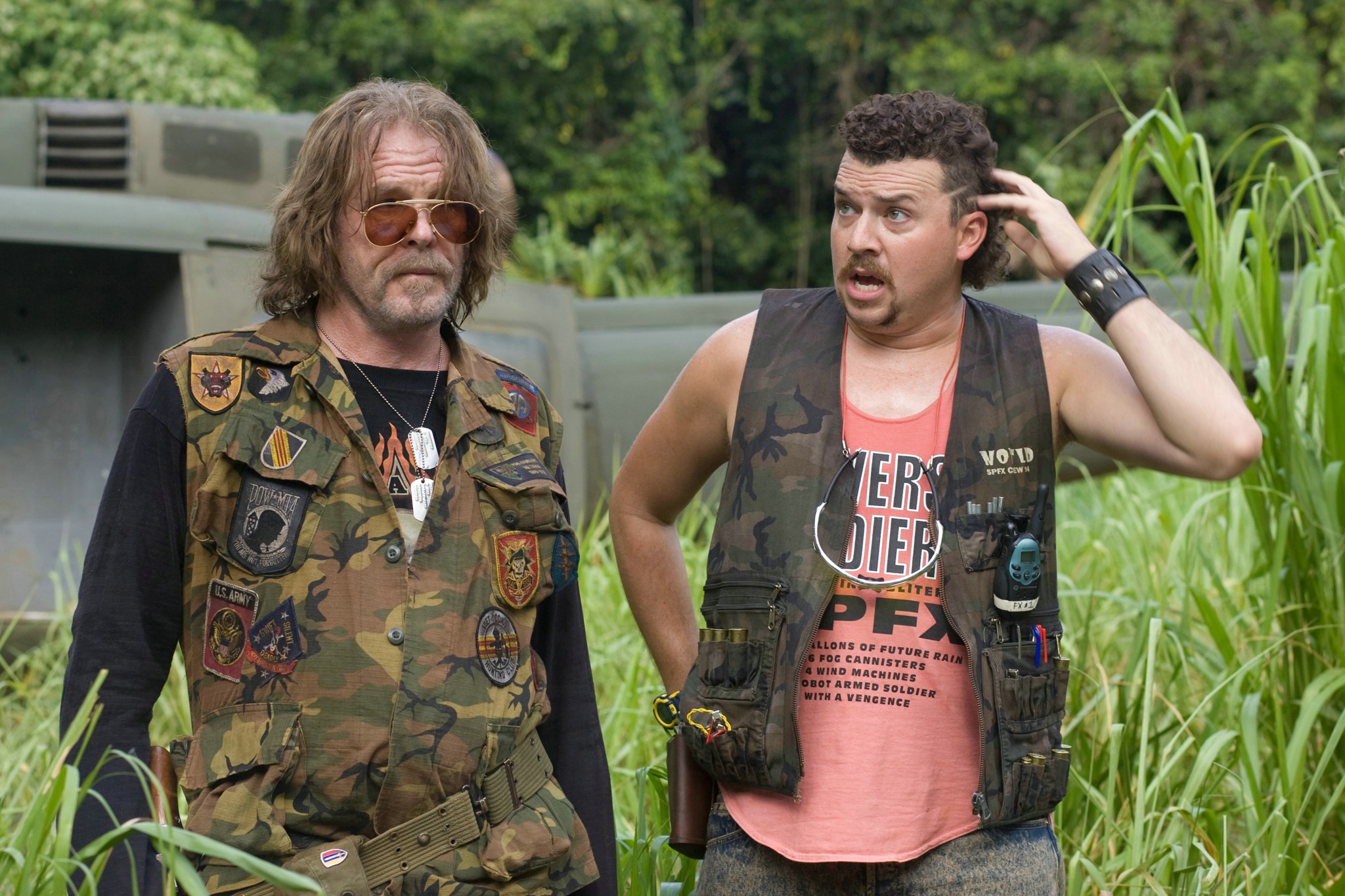 There are moments in this film that are pure genius: almost everything to do with Downey Jr., for a start, is utterly hilarious, and it’s such a shame that the man has spent so much of his life in trouble with drugs and the law, that he’s been prevented from really becoming the star that he could have been. His performance is spot on, a pitch perfect portrayal of a man pretending to be a dude pretending to be another dude, probably white but pretending to be black. The final battle between the actors and the drug manufacturers in the tiny Vietnamese village is superbly choreographed, a bombastic action melee that is both comedically spot on and action-wise flawless. Explosions, destruction, the overkill of carnage: all are given full thrift in Tropic Thunders final act, and the film is the better for it. Stiller’s deft command of the cinematic form is, in this instance, a far cry from anything he manufactured in Cable Guy or Reality Bites. The slick production values of the film are in themselves a vindication of the lengths studio’s will go to to promote a dynamic end product, something no doubt Stiller would have had a wry chuckle at. 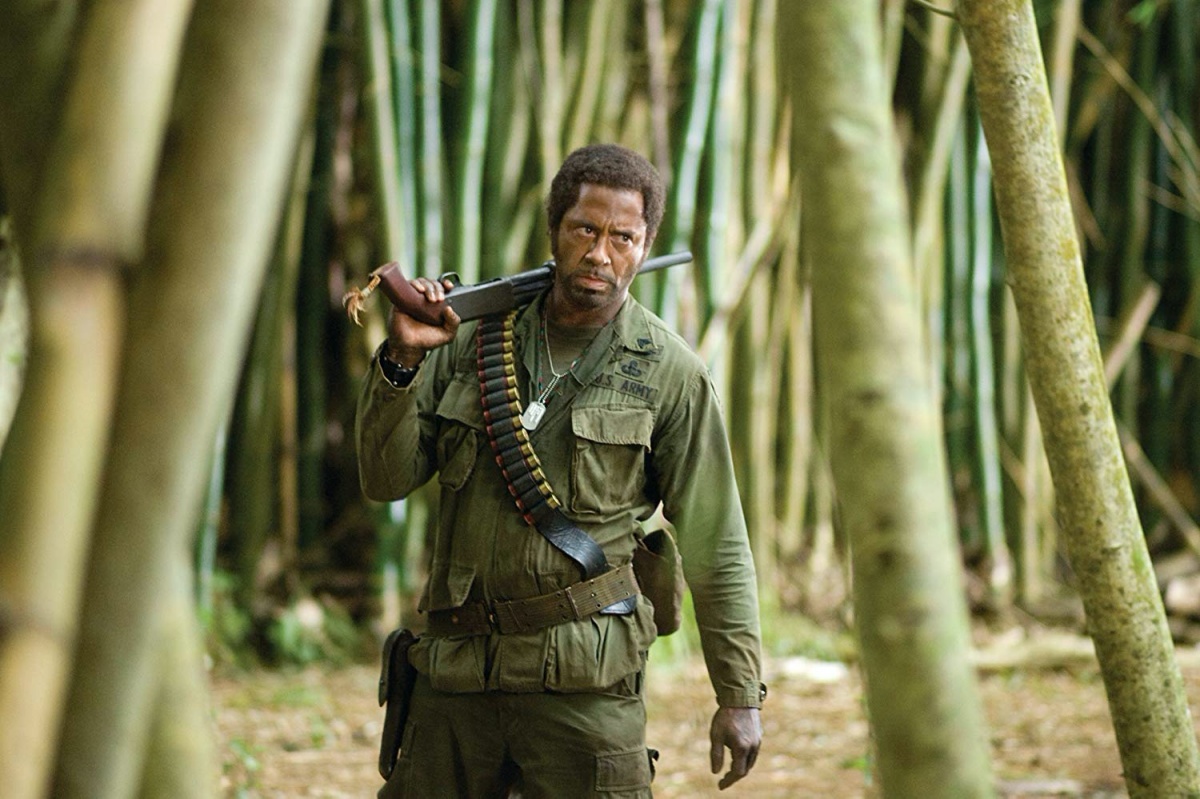 There is a lot to enjoy about Tropic Thunder; and by and large, the film succeeds in almost every respect. Some of the comedy is perhaps a little overtly cerebral for a more general audience, and some of the films “industry” jokes may not resonate with people unfamiliar with the Hollywood system; however, most will lap it up. Yes, it’s silly.  Yes it’s entertaining. Yes, you will enjoy it, but only if you leave your brain at the door. Tropic Thunder is genuinely amusing, comedy dynamite. And if you ever wondered what kind of farmer Robert Downey Jr. would like to be, then this is the film for you.