The first of the Star Wars films to be directed by somebody other than George Lucas, Empire Strikes Back is one of those rare sequels that not only equals the film that came before it, but in some ways manages to exceed it. Filled with stunning action, production design and a memorable climax (!), Empire remains perhaps the Everest of the Star Wars sequels, a film that, for it’s singular emotional content, will perhaps never be equalled.

We pick up the action some years after events in A New Hope, with the Rebellion again on the run from a now reorganised (and reprisal-seeking) Empire. When their latest HQ is discovered on the frozen ice planet of Hoth, the Empire attacks, sending the Rebellion scampering through the galaxy in their varied spacecraft. Vader, himself pursuing Luke Skywalker (since it appears he now knows of Luke, and is aware of just who he is… which will be revealed at the end of the film) chases the Millennium Falcon, wrongly believing that the young Jedi is on board. He isn’t: he’s on his way to the Dagobah system in search of a mysterious Jedi master known as Yoda. Crash-landing on Dagobah, Luke finds himself alone (except for R2D2, who has accompanied him) on the swampy, monster infested planet. A small green creature, who seems to know of Yoda, intrudes upon his lunch-break and casually informs him that he knows where Yoda lives, and will take Luke to see him. As it turns out, the small green creature actually is Yoda, and Luke is staggered to find this out. He thought a Jedi Master would be a large, powerful beast/man who could teach him how to defeat Vader. Yoda, sensing the anger in Luke, takes his time to acquiesce to Luke’s demands for training, but only after Luke initially refuses to believe Yoda can help him.

Meanwhile, Han, Leia, Chewbacca and C3PO are on the run in the Falcon, pursued by the advancing Imperial Star Destroyers since their hyperdrive has been deactivated. Flying through an asteroid field, itself a suicide run, appears the only way or chance of escape. With Leia and Han constantly bickering, Chewie roaring his disapproval at every available moment, and C3PO whining and gibbering on in the background, these scenes, interspersed between those of Luke and Yoda, are the humorous highlights while the young Jedi is trained by the master, a more sombre and serious tone there. Leia and Han, played ably by Carrie Fisher and Harrison Ford respectively, have a great on-screen chemistry, something we all noticed in A New Hope. Here, Lucas improves upon that chemistry by having the two slowly, slowly, fall in love. Han is more forthright about his feelings for her, a cavalier braggart who seems intent on breaking her down, and she, a resilient royal princess who simply wont, cannot, can’t, fall for a dirty, recalcitrant space-pilot of (invariably) low rank. The fact that Han has been given a Captaincy by the Rebellion seems to matter little. Over the course of the film, however, Leia’s impervious emotional armour is worn down, and by the end, she blurts out her feelings for Han in a moment of high tension. 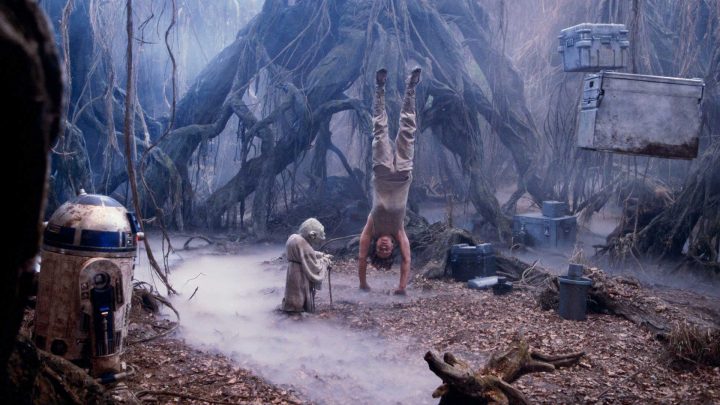 Lucas recognises the fact that in order for a character to grow, you have to place them in a situation where they can develop into somebody different than when we first meet them. In Empire, Lucas ratchets up the emotional core of our characters, by placing them in situations where their innermost feelings, their true selves, are laid bare. For Luke, it’s his betrayal of trust by Obi-Wan (and Yoda) at Vaders staggering revelation (which, thanks to the Prequel Trilogy, is something new viewers will already know, and thus, negate the original moment of sheer jaw-droppery!) about being his father, for Han and Leia, it’s their reluctance to admit their feelings for each other, which is forced out mainly due to Imperial interference. Just on that point, I think it’s fair to say that Han is slightly jealous of the behaviour of Leia towards new character in the saga, Lando Calrissian, played by Billy Dee Williams. Lando and Han are old buddies (at least, that’s how it seems) although they both have had their fair share of mistrust. Lando puts the smooth moves on Leia when the Falcon lands at Cloud City, of which Lando is chief administrator. Although he apparently betrays them to the Empire, which leaves Han encased in carbonite, in a form of suspended animation, he is still loyal to their cause: he just can’t show it. Leia, at first welcoming the attention of the nicely dressed, handsome city official, flirts with him a little, if perhaps reluctantly so, since she knows political manoeuvring when she sees it. She’s a political princess, after all. Han, jealously wanting Leia’s attention to himself, berates her (in anger) and himself (in frustration) for feeling this way. The growth of Han and Leia as characters is sparked by the introduction of Lando, a point which is effectively erased come Return of The Jedi’s bombastic conclusion. The “love triangle” element is something that could, perhaps, have been expanded, left a little longer to cook, but as it is, is still enough to generate the required admittance of feelings between the two. By the time Return Of The Jedi comes around, the love triangle is never revisited.

By far the most powerful journey of the film, however, is Luke’s. Luke has grown arrogant in the years between A New Hope and Empire. He thinks he’s an all conquering, all powerful Jedi, and this belief gets him into some serious trouble before the film is over. Empire is essentially Luke’s lesson in humility, if you will. He goes to Yoda, a Jedi master of some legitimacy, filled with the unjustified desire to stop Vader out of existence, a black-and-white approach to what is, essentially, a very complex problem. Yoda, recognising the sense of anger and vengeance within the young man, sense that a false step in his training could result in Luke following Vaders descent to the Dark Side, a path that would prove catastrophic to the Galaxy. Luke’s wearing down is essential for him to survive the coming escalation, the advancing confrontation with the vastly more powerful Sith Lord. But it is the revelation that his friends are in danger, a vision from Yoda, that spurs Luke into rash action. He travels to Cloud City, where Leia and Han are prisoners and bait, to draw him out. Luke is confronted by Vader, who senses that the young man is gradually becoming a powerful Jedi Knight, but warns him that he is not one yet. They battle, with little regard to their surroundings, until Luke dangles precariously over a deep chasm leading down out of Cloud City. There, in a staggering denouement, Vader reveals Luke’s true parentage to him. Luke, stunned by the revelation, is galvanised into action, and he allows himself to fall to apparent doom, although in reality he is saved by a vacuum driven chute in the chasm wall. 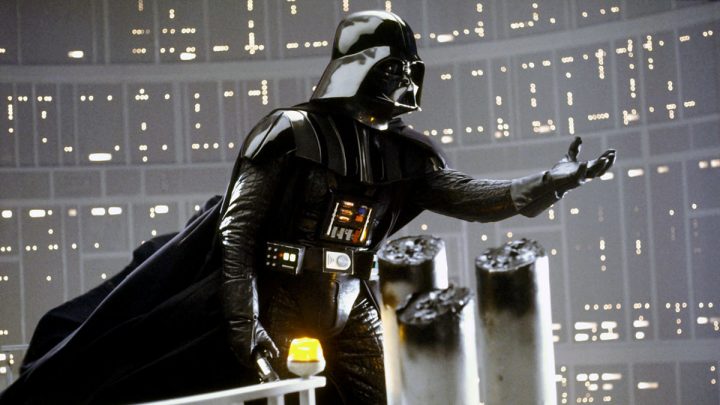 I have long wondered if Luke tried to commit suicide by falling, given that it’s highly unlikely he did not know that the city’s garbage disposal units would save him. After all, when you discover you’re the son of the galaxy’s most hated individual (perhaps second only to the Emperor), you’re probably not going to take that to lightly. So what’s your best option: accept it and join the family business of murder and destruction, or off yourself in the vain hope your own lifes work isn’t tainted by your fathers. I think Luke tried to kill himself, realising that hope was gone. Which is quite a dark theme, considering. After all, he sense there’s no real hope in his situation. By taking Vaders offer of salvation, he would be contravening all his own beliefs; something I think he simply couldn’t accept. For Luke, the only way out was down (death), and after a brief glimpse in the direction of travel, he allows himself to fall. Vader, himself seemingly beset with a sadness at Luke’s decision, pauses for a moment, before turning and leaving. Is he upset by this, truly? Perhaps, perhaps not, although we’ll probably never know. I like to think that somewhere deep inside, Vader suffers guilt at this stage.

However, Luke doesn’t die. Instead, he’s ejected to the bowels of the city by the internal mechanisms, and ends up hanging by a communication aerial beneath the massive structure. He Force-calls Leia, who is just on her way off the planet in the Falcon with Han and Lando, and is subsequently saved from certain death. Given that moments earlier he’d just tried to fling himself to a bloody, messy death, his sudden reluctance to give up is a little confusing. But I take it in stride, as a man who has escaped death by Vader and is now wanting some kind of revenge. After all, he’s got some unfinished business with a certain lying green Jedi Master and a ghostly Obi-Wan.This revelation is enough to relegate all that takes place after it in the film to merely window dressing. The audience, without the benefit of the prequel trilogy, is blown away. No doubt people are turning to each other in their seats and asking the same question: “Vader is Luke’s father? How did that happen?” It’s one of cinema’s most famous plot twists, and the film has since attained legendary status due to this event. And it’s here that Empire is a superior film to its original. Empire takes Luke to a truly dark place, a revelatory moment of pure, unadulterated horror as he sees that his life is intertwined with that of the man in the black suit and breathing issues. The performance of Mark Hamill here is wonderful, an insanity gripping him as he struggles to understand what he’s just been told. Suddenly, all he knows is a lie, and his life is ripped from under him. Director Irvin Kershner graciously allows us to remain on Luke, refusing to cut away, as the emotion washes over the young man. He’s at first disbelieving, then incredulous, then incensed. Vader, implacable beneath the black mask, is silent, as Luke comprehends what he’s been told.

For a second, Empire Strikes Back seems to elevate itself beyond the medium of film: it’s a work of art at times, the emotional weight of it all descending upon us as we watch, horrified, as our heroes suffer loss and heartbreak in their hour of darkness. But for the light to shine brightest, we must first become accustomed to the dark. I’d hesitate to say that Empire Strikes Back is a perfect film, although it skirts the promise of such a statement quite closely. But it is a wonderful Star Wars film, and for it’s fine balance of shadow and light, romance and heroism, betrayal and loss, it ranks as perhaps the best of the six live-action feature films in Lucas’ saga.