Synopsis: A female runner called Faith is targeted by the police in a totalitarian society after her sister is framed for the murder of a politician, and Faith is seen at the scene of the crime.

Review : Whilst the controls and style is new and interesting, and the visual style is simplistic, yet beautiful and brightly coloured, the jumping puzzles can sometimes be a little hard and frustrating.

Rating : 7.5/10. Overall a fun, well polished game, but it doesn’t have any major replay value.

Mirrors Edge is a new breed of first person action adventure games that is a mixture of Tomb Raider, and Assassins Creed.

The game, created by EA’s Digital Illusions CE department (DICE), was initially released on the Playstation 3, and Xbox in late 2008, and then ported to the PC early this year, and it is the PC version I am reviewing.

The game focuses on a female ‘runner’ called Faith. In the totalitarian society (think 1984, or Equilibrium) the game revolves around, all communications are heavily monitored, and the only way for businesses to send secure communications is by getting a runner to physically transport it over the rooftops. 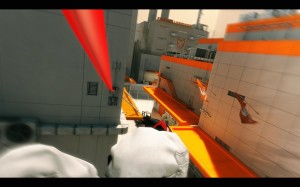 Not far into the game you get an urgent call from your sister (a police officer), requested you meet her at Pope’s office. Pope is a prominent politician and it turns out that she’s just been framed for killing him.
You can’t talk long as you have to run from the SWAT team that have come to arrest her. A chase ensures, which ends with you jumping from the roof onto a News helicopter that’s hovering over by the roof, and you then jump from it and land on a large soft box on a nearby building, completing that particular mission.

From then on, you, and all runners are hunted by the cops at every chance, which the runners believe is different to normal, and a little unexpected. They apparently didn’t used to normally shoot you on site, and you didn’t used to get hunted down by minigun-wielding police helicopters.

The gameplay is structured into various missions, usually involving finding out about someone, trying to steal some information, or trying to get to a certain location. You generally start the mission on the rooftops, and make your way through the city, inevitably being chased by the police, and having to use your agility, speed, and daring to loose them. After finally achieving your mission goal, you will usually automatically return to base to start the next mission. 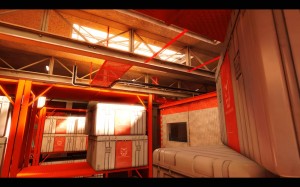 Half the game is about working out how to get to the next section.

Most of the storyline is explained in cartoon stylised videos, and scripted sequences at key parts of the mission, thankfully you can skip these fairly easily if you have seen them before. During the game play you are usually in contact with Merc  the leader of the runners, via radio intercom, who will notify you of specific mission details and changes to the current objective. Some parts, especially when you are being chased are time critical and if you don’t make it though to the next restore point in the limited amount of time you are usually shot and killed and will have to try the section again from the previous checkpoint. Other sections aren’t time critical, and you have as much time as you need. You usually need the time as there is usually some advanced (and infuriatingly annoying) jumping puzzles. The two that particularly challenged me was one section where you have to climb up the inside of a ship, and another where you have to make your way up a mass of scaffolding inside a building. 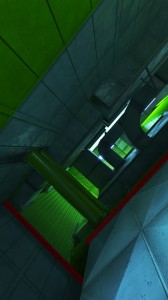 Part of the ship section

For the ship section, you come out of a vent and slide down to the bottom. You then have to wall climb, or jump and about turn to climb up onto a ridge, you have to shimmy around to the other corner on your left, jump across to the next ledge, shimmy across to the left again, jump up to the air-conditioning duct, slide along to the left edge of that, then jump across to the ledge which is at the 8 o’clock position from your resting position on the ledge. From there, slide along to the right, turn around and jump to the air-conditioning duct behind you. You can now finally get up onto the duct, and move to the right. You then need to get a run up and jump off the wall, while turning to the left, and if you do it right you can jump onto the bar, and then ledge before making your way out the vent and onto the next section. Get stuck? There’s plenty of walk throughs online.

Checkpoints are saved automatically, and you have no controls to save or reload, except at the main menu. There are two different types of check points. Ones that you go back to when you die, which usually aren’t too far away, although are usually just far enough away to be annoying. While the others are denoted by a Mirrors Edge symbol on a nearby wall and will set save points that you can return to should you quit then resume the game. These save points are usually between every 3rd and 5th resume point, meaning you can go through a reasonable amount of jumping, and tricky manoeuvres only to quit, or have the program crash (like it did to me a few times) and have to redo it all again, which was very frustrating some times. 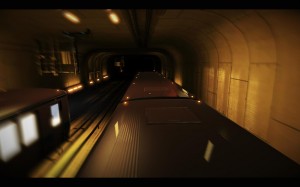 Riding a train (watch out for the obstacles)

It may have just been an unpatched version that I was playing, or maybe my computer, but Mirrors Edge didn’t seem to like me pressing [alt] + [tab], or [ctrl] + [alt] + [del], and it wasn’t the most stable, nor well tested console port I’ve played.
Throughout the game there are a number of hidden bags that have been dropped by previous runners. There are 3 per mission, which unlock extra bonuses, and little bits of information. While I only ever managed to find 1 or 2 bags per mission there are some great game walk-throughs and guides that can help you find them if you so wish. They can also help when you get stuck, which I have no doubt you will unless you are an elite expert at such games, or very determined. 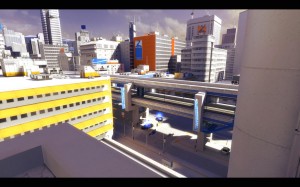 The gameplay itself is first person, but not like Doom or Crysis. You play an agile character adept at running, jumping, and various hand to hand combat, with some basic weapons skills. Most of the time you spend jumping off buildings onto other buildings, running and bouncing off walls, balancing on beams, swinging off bars, sliding on wires and hanging off ledges. During the initial training you are taught that most of the time it is better to run away from armed combatants, although there are times when you can fight a police officer, and others in which you have to fight them, in which case it is best to split them up and take them out one at a time. You can either beat the daylights out of the person, or, when their weapon glows red (which only happens for a brief moment), you can try and disarm them. Usually if you fail to disarm them, they will beat you down and kill you, making you restart that section again. While it can take some skill to successfully disarm someone, you can cheat somewhat and go into a ‘reaction’ mode which kicks in a mass of adrenaline and briefly slows everything down, bullet time style, allowing that brief moment of opportunity to become more like eternity, until everything speeds back up and you disarmed the attacker and knocked them out. You are told that the reaction mode is recharged by running, but just running didn’t seem to recharge it for me, I had to do various manoeuvres, and basically complete a section. 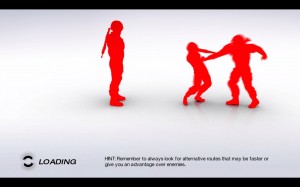 Between Police, SWAT, and some specialised forces, you get shot at and get to shoot with pistols, shotguns, Uzis, belt fed machine guns, and even sniper rifles.

I mentioned that Faith only has basic weapons training, by that I mean that she can aim and fire weapons, but doesn’t know how to reload them (nor seems to have any pockets to store extra ammunition). This generally means you only have enough bullets to kill the next person or two before having to drop the current weapon and pick up a new one. Although the more advanced the weapon is, the harder it is to get to the attacker without dying, but also the more people you can kill with it.

During gameplay there is a feature called Runners Vision, which makes certain objects glow red, highlighting the fact that you can interact with them. Usually you will see pipes that you can climb, boards you can jump off, things to turn or press, and even enemies that are in your way and you should disarm instead of just run from. If you are lost, you can hold down [alt] and the view will snap to the next point you need to head for, be it a vent, or a wall to climb. It’ll usually show you the exit point, but not the way of getting there as there are usually multiple ways. 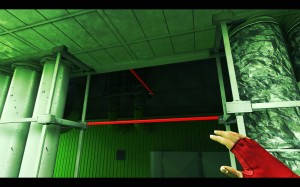 Overall the game is interesting and enjoyable, but I found that it lacked any real replay value except for some maps that you can try and beat your own speed record on. The game is actually an interesting mix. It is too violent and advanced for children, but most hardcore gamers will find it too simplistic. It does cater well for the casual adult gamer. Someone who just wants to play the odd computer game every now and then which will require them to have some skill, and challenge them a little, but it doesn’t require the super-quick-twitch reactions required to play Counter Strike. I also don’t believe the game has any real multiplayer capabilities.

Worth playing, but not worth paying full price (wait until a special is on).

I am an active young photographer, film-maker, web-designer, programmer, and basically anything to do with Digital Multimedia.
I also watch TV serials, and play computer games in my spare tiime.
I host, and maintain the Fernby Films site, amongst 20 other websites.
Together, Rodney and I created School Yard Justice, and I helped film some of the scripted sequences of Thrash Bus 2. We are both currently working on a SFX heavy mocumentary.