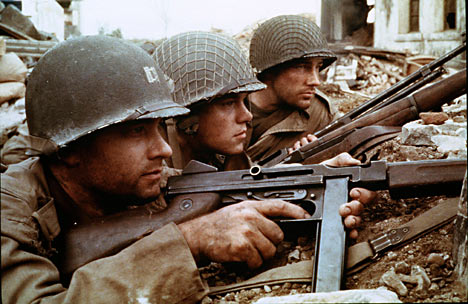 As is often the case in Hollywood, similar films are released within a few months of each other that makes people wonder if the major studios are not somehow colluding to produce a certain kind of sentiment among the viewership: that’s not the case, by the way, that was a rhetorical statement. Every couple of years, two studios will release a film that is so similar in plot or storyline it’s generally a race to see which comes out first.

Today, what I want to discuss, are the relative merits of the two epic war films released in 1998, that redefined the way war movies were filmed and shown to audiences.

Until Saving Private Ryan was released in late July of 98, war had generally not been touched on by modern filmmakers with the exception of Oliver Stone, whose career until then had included Born on The Fourth Of July, Platoon, and to a certain extent, Salvador, all exceptionally well made, often controversial, films dealing with war in a remarkable confronting way. Prior to Stone, the closest audiences had come to participating in actual war was in the old 50’s and 60’s “glory” war films, starring the most rugged and chiseled stars of the time (generally in gratuitous cameos) all beating their chests and engaging in macho bouts of unbridled heroism that descended into outright nonsense. Until recently, world audiences were unwilling to witness the true horror of war brought close to home, right into your face. Spielberg, in much the same way he revolutionized the extent that digital effects could tell a story in Jurassic Park, decided to take what was , at the time, a relatively unconventional approach and utterly dehumanize the ravages of war on the participants, and give us the full throttle adrenaline ride that it must have been to be shot at, shot up, and blown to bits on the beaches of northern France during the first days of D-Day. Of course, Saving Private Ryan was never meant to be thrilling. It was, for the first time in modern cinema, an example of the sheer brutality and uncompromising human cost of waging war on fellow humans. Graphic, forceful, bravura filmmaking done in such a way that the audience feels positively ill upon witnessing this, Spielberg managed to bring home just how bad war actually is to an audience desensitized by Playstation and Big Brother.

Reading any review of Saving Private Ryan will no doubt mention the films opening twenty minutes, which is a veritable assault on the mind and senses, putting you right into the carnage of the D-Day landing, bullets, bombs, grenades and everything. I remember sitting in the cinema, a fair way towards the back, and still twitching nervously in my seat as i felt the bullets whiz past me, the bodies and limbs shattering and exploding on the screen felt as real as sitting at my keyboard does now. It moved me, and I sat through the rest of the film feeling nauseous; not due to the hand held nature of the cinematography, but due to the graphic and powerful nature of the images flickering on the screen. The finale, a forty five minute attack on a small river bridge and the last stand by a group of desperate soldiers, is both harrowing and heart rending. It was here I felt that Spielberg denied us the somewhat smug showiness of previous films. Spielberg’s serious films, including Schindler’s List, that much vaunted Best Picture Oscar winner of 93, generally still have vestigial moments of showiness, shots or scenes that just scream “look at how clever we are”. With Ryan, however, I felt that at this point, Spielberg had simply decided to avoid his past cliches and turn a directorial corner.

The film relies heavily on the shoulders of Tom Hanks for its emotive power and the all-too-human touchstone we need for films to connect us, and he never fails. His unflinching Captain Miller is perhaps too stoic to be real, but history tells us people got to this point in war, disconnecting with their own emotions to help them survive the bloody unthinkable. When he breaks down after the death of one of his younger soldiers, you can feel the tears being pulled out of you. Such raw power on screen is staggering to behold. Of course, the passage of time has lessened the impact somewhat of this remarkable film, Watching the film multiple times on DVD, in the intervening decade since its release, has numbed us somewhat to it’s stark reality. Since SPR came out, almost every film tackling war since has been shot and edited in a similar way. A prime example is Ridley Scott’s equally magnificent Black Hawk Down, another example of top class war film. It’s like Hollywood suddenly discovered a new way to make war “real”, and not the stuffed shirt buffoonery of years past.

Then, in December of 1998, around six months after the release of SPR, came the much vaunted return of famed director Terrence Malick. After a twenty year absence from the film-making scene, he returned with perhaps one of the more difficult and obscure war films ever made. More like a postcard from paradise with some battles thrown in, Australian audiences avoided this film like the plague after initial test screenings: it’s not hard to see why.

Malick is one of those directors who would rather spend a week shooting trees and animals than any actual acting, or action. The Thin Red Line is filled to the brim with shots of trees, fauna and wilderness of every shape and size, and takes an ice age to develop into a story. Told in such a slowly paced way, most audiences (at least here in Australia) were put off by the fact that it had been touted as a big blazing action film, and wasn’t anything of the sort. Critics raved about its cerebral nature, however, others were confused with the point the the film was ultimately trying to make.

TTRL tells a disparate story about a group of soldiers fighting the war on Guadalcanal, and their emotions and thoughts of fighting such fierce battles in such a beautiful part of the world. More often than not, voice-over is used to tell the story, something modern film audiences can only tolerate for so long. Unlike SPR, the battle sequences are few and far between, although it must be said that when they do occur, they are quite stunning. So far in between, that in the cinema I watched this in (which was pretty much packed, by the way) you could actually feel the audience bristling with boredom after about the first half hour, waiting for something to actually happen.

While watching this film in the cinema, at its complete running time of nearly 3 hours, TTRL is like injecting Valium directly into your brain and letting it rest there for the whole time. The film is, essentially, mind numbingly slow and utterly pretentious, devoid of any real emotional impact as most of the cast are reduced to cameos and bit-parts trying to make up a whole: only Elias Koteas and a stunningly fierce Nick Nolte bring any credence to the all-star casting going on here. What is also stunning about this film, aside from its sheer length and lack of emotional depth, is the sheer number of big name stars who gave performances before the cameras and were cut! Names like Martin Sheen, Billy Bob Thornton, Gary Oldman and Viggo Mortensen all acted for Malick, but due to the films massive length, their scenes were ultimately cut. I doubt seriously whether Oldman would have delivered a performance worthy of the cutting room floor, so it makes you wonder if all the shots of trees and birds and rivers and things that actually made the cut were that much better?

Critics of Malicks told stories of who notoriously difficult and eccentric the director could be to work for, and for most on set, it proved to be well founded folklore; the problem is, most people thought this was th work of some kind of misguided genius. I have to tell you, Malick is no genius. TTRL, as well as the more recent labour-of-audience-viewing, The New World, are both utterly pretentious and un-involving tripe of the highest order; although moments of TTRL do ascend to greatness, they are ultimately hamstrung by their faults. Where I find Thin Red Line particularly disappointing is that it speaks so much, and says so little: you come away with very little from this film that hasn’t already been said so often by other, better, films.

So for future reference, if a director has a reputation for being difficult and his films are languid, laborious, lengthy piles of waffle, such as TTRL, why do people keep giving them money to make more films? I guess when Martin Scorcese and other film luminaries rave about this film, you have to give what they say some credence, however in this particular instance, I think they were watching a different film than I was.

So which is the better film?

While poles apart in terms of directorial skill, look, emotional content and overall entertainment, both films attempt to take war into the lives of the viewer, putting them on the front line and on the battlefield; whether successfully or otherwise is perhaps not the point, I guess. Both films are brutal at times, and beautiful as well, for their themes of human loss and despair. Private Ryan is a graphic, in-your-face doco styled affair, whilst TTRL is a true widescreen affair, lavish shots of landscapes and battles aplenty in ravishing 70mm photography, like a holiday brochure gone horribly awry. Both achieve their point stylistically, although perhaps the gritty SPR style slightly comes out in front for assisting the storytelling, unlike TTRL, which it appears the cinematography IS the story.

The acting across both films is uniformly excellent, although there is less actual acting in TTRL, which relies almost exclusively utilises voice-overs, so for me, SPR comes out on top again. Voice overs are good for part of the film (think the funny parts of Bridget Jones’s Diary) but not all. Overuse of a voice-over can kill a film, and it does here. With Private Ryan, the ensemble cast is used to brilliant effect by Spielberg, gaining all the dramatic narrative he requires from simple, elegant conversations told in a realistic way as our soldiers move through the battlefields of France.

Personally, I found SPR a much more emotive and fulfilling film, devoid of derivative narration and pointless scenery. It got to the point, and told the story well, which is all you can ask of any good film. TTRL managed to sway between patriotic, patronising, and just plain pissy, trying to be an really expensive art-house film and succeeding tenfold. Thematically, they attempt to convey the same message, I think, and unfortunately, in my humble opinion, only one really succeeds.