Principal Cast :  Amber Midthunder, Dakota Beavers, Dane DiLiegro, Stormee Kipp, Michelle Thrush, Julian Black Antelope, Bennett Taylor.
Synopsis:  The origin story of the Predator in the world of the Comanche Nation 300 years ago. Naru, a skilled female warrior, fights to protect her tribe against one of the first highly-evolved Predators to land on Earth.

As one of the two Big Horror properties from the old 20th Century Fox, the Predator franchise has been a problematic intellectual property for filmmakers since the original movie in 1987. Since Arnold Schwarzenegger went toe-to-toe with one of cinema’s most fearsome sci-fi creatures, the franchise has wallowed in iniquitous, poorly conceived or executed follow-up films, including 2010’s Predators, Shane Black’s unfortunate 2018 entry The Predator, and the quite generic Alien V Predator duo, neither of which did the property any good. Predator 2, the 1990 entry starring Danny Glover, has become something of a cult classic in the years since, despite mixed to negative reviews initially, and holds up largely as a violent, sadistic sequel if only for the risible script and the hammy, over-the-top performances from the cast. It’s been a long time between quality entries in the Predator franchise, and I would argue this has soured many audiences on the property as a whole as something to keep an interest in. Prey, an in-continuity prequel to the original Predator, sees director Dan Trachtenberg (10 Cloverfield Lane) and screenwriter Patrick Aison tackle the premise of one of these technologically advanced creatures landing amidst a pre-industrialised culture, and how humankind of a perceptively limited nature might fight back. It’s an intriguing proposition and one fraught with potential missteps, not the least of which being a distinct lack of raw firepower to combat the alien hunter and their various weaponry, making for a considerably uneven fight. You needn’t worry: Prey is a masterful film in its own right, easily the best of the Predator franchise sequels, and a contender for the crown as the most complete and satisfying Predator movie made to date. Like Alien and Terminator 2 before it, Prey does what any great sci-fi horror franchise should do if it wants success: put a woman front and center and watch her absolutely tear the monster a new asshole. 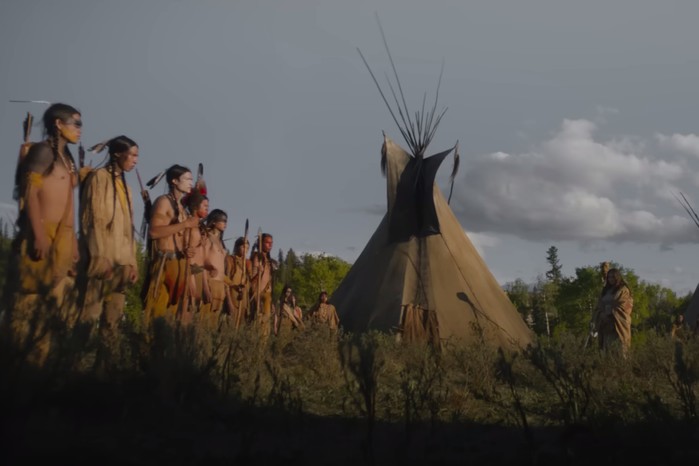 Amber Midthunder (The Ice Road) plays Naru, a young Comanche woman living with her tribe on America’s great plains in the 18th century. Living a hunter-gatherer lifestyle, Naru is impetuous and wanting to become a great hunter, like her brother, Taabe (Dakota Beavers). After the tribe’s warriors set out to hunt a lion nearby and kill it, Naru encounters an enormous alien being, a Predator (former pro basketball player Dane DiLiegro), which has landed on Earth to spend some time hunting. After it kills a bear and several of Naru’s fellow tribesmen, Naru, together with her dog and a small army of French trappers out to hunt buffalo, must stand their ground against the more powerful creature and kill it, before it kills them all. 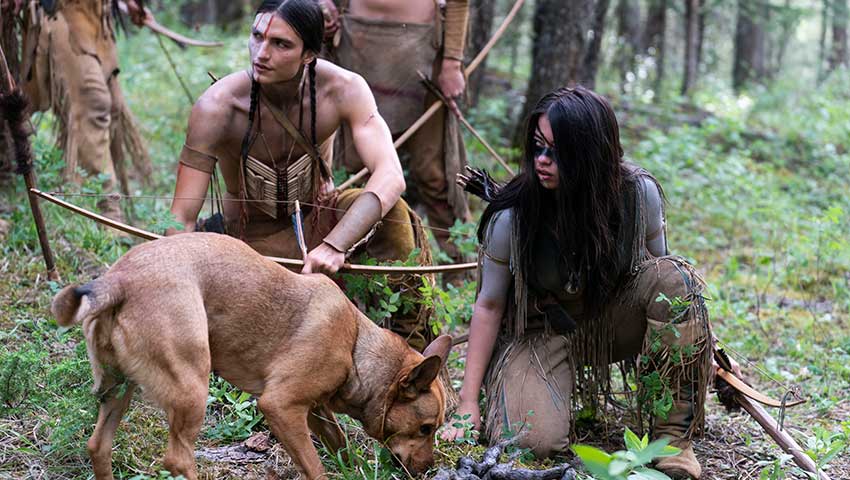 Trachtenberg’s film is truly a thing of beauty. A haunting period piece, a violent sci-fi adventure, and a personal quest story, there’s a great deal of thematic substance to Prey’s overtly thrilling franchise slaughter. Yes, the body count is high, and almost all of the Predator’s kills are viciously entertaining, and Trachtenberg gives a few nods to the John McTiernan-directed original (including a reprise of one of the original film’s most famous lines… see if you can pick it), but it’s the writing on the film and the creation of the human cast as actual people, rather than just derivative characters, that makes all the difference. If we as the audience can care about the people we see on screen, we’re invested in their plight and the outcome of the story, not simply wallowing in superficial shock and awe, and I’m inclined to think that Prey represents a significant uptick in this aspect of storytelling for the overall franchise. Hell, it even does character work a little better than Predator, which is saying something.

It must also be said that Amber Midthunder delivers a truly ferocious performance, easily the equal to fellow female genre heroes such as Ellen Ripley, Trinity or Sarah Connor. Am I comparing Midthunder’s physicality and screen persona to that of Sigourney Weaver or Linda Hamilton? You bet: this is Midthunder’s breakout performance and I hope and… er, pray that Prey sets her on the path to legitimate stardom. She absolutely owns the film, from her hunting prowess and ability to analyse her surroundings and find a strength or weakness in her opponent, to the final battle with the Predator itself, there’s no denying the woman has a presence about her on the screen that absolutely makes it impossible not to take your eyes off her. So too Dakota Beavers, as her on-screen brother, offering masculinity within a familial affection: in fact, the entire cast are all pretty great, especially the Native American cast portraying Naru’s tribe. Everyone involved here is convincing and committed to the bit, from the most minor character to Midthunder’s instantly iconic Naru, which gives the film’s aesthetic a genuine sense of realism despite all the fantastical things that occur. 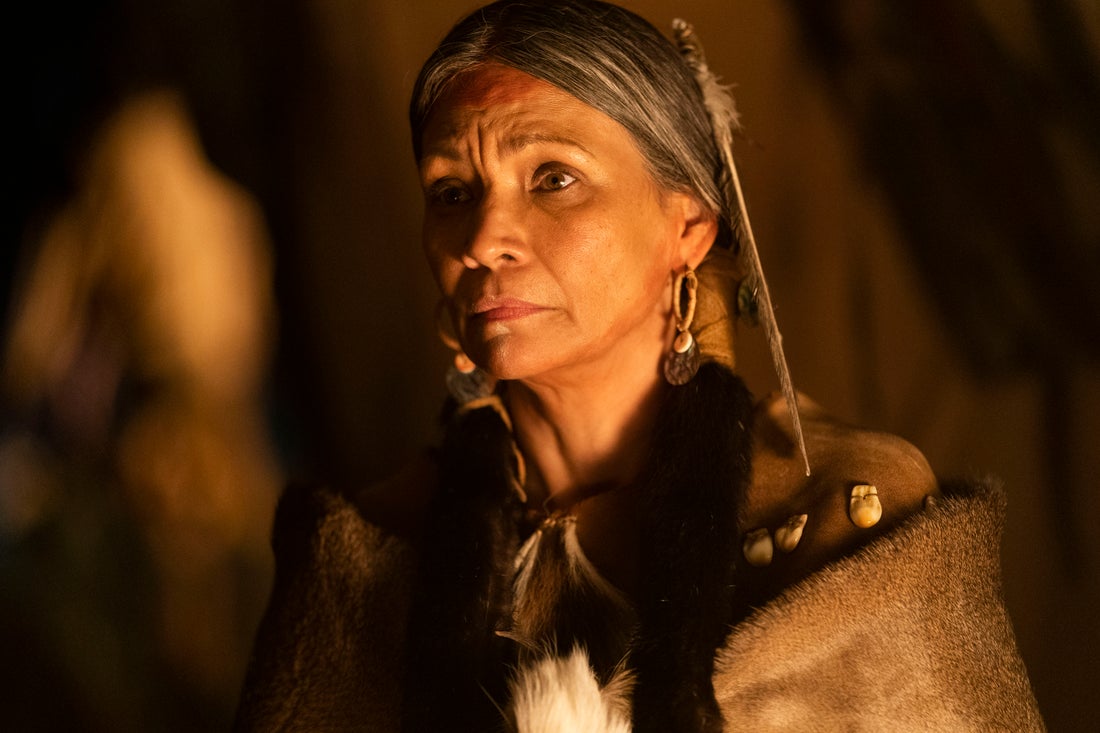 You might think that a film in which an enormous otherworldly killing machine going up against people with bows and arrows and very basic firearms might be a considerably one-sided affair, and you’d be correct. The Predator in this film easily outclasses everyone else in the movie with sheer size, speed and weaponry. What makes the film so thrilling is just how Naru and her fellow tribesmen try to take down the more powerful foe, how they out-think and outplay the creature even with their respectively inferior technology. The film leans heavily into a survivalist mentality and that makes for remarkably compelling viewing: people will scoff at Naru, who stands 5’5″ soaking wet, taking on an eight foot space monster without hesitation, but the film gives us a plausible, reasonable motivation for her to do so, and the complexity of her planning, training and eventual one-on-one combat is delivered in such a way that it makes sense to the story. Sure, the Predator hands out an ass-whopping to almost everyone on the screen – including, in one terrifying sequence, a bear – and Trachtenberg builds on established franchise iconography to plant us right back in the jungle alongside Arnie and Big Bertha in our mind’s eye, but Midthunder’s fierce-eyed characterisation of Naru is more than strong enough to make us believe she could actually do it.

In terms of the film’s technical work, Prey sparkles. The cinematography by Jeff Cutter is simply gorgeous, with the wide open vistas and dense forested landscapes looking so inviting and isolated you want to go there through the screen, and even the movie’s night sequences are crisply executed and easily understood. Trachtenberg and Cutter ape John McTiernan’s work from Predator, using wide angles that push in on trees and boulders and random landscapes to force the audience to scan the screen to see if there’s a monster lurking just behind in the shadows, and it’s just as effective now as it was back in 1987. The dramatic pauses between action beats, and the effective use of both the landscapes and the Predator technology in the various kill sequences, ratchet up the film’s fingernail-tearing tension, thanks to editorial choices by Angela M Catanzaro and Claudia Castello, and they intersperse some breathtaking “money shots” with a real sense of dramatic urgency in even the most quiet, contemplative moments. Sarah Scahachner’s evocative score sits in the background a fair bit, and is a more cerebral outing compared to Alan Silvestri’s bombastic drum-kicks in the original movie, offering a soulful, ruminative musical accompaniment whenever the film requires it. And I would also argue that the production design in general, from the Native American tribespeople, the invading French trapper troupe, and even the mind-blowing Predator re-design itself, are all first rate.

Dan Trachtenberg’s Prey is the perfect course-correction for a flailing franchise. It’s a magnificent film, hugely entertaining and showcasing a star-making turn from Amber Midthunder. Violent, emotional and played with a real sense of showmanship, Prey is a solid argument for how to make a sequel (or in this case, a prequel) the right way – it honours the original film, pays homage to established precedent and manages to take a well-known foe and give us something new and interesting. It does this by giving us a central character we can empathise with, we can attach to emotionally, and were it not for Midthunder’s acrobatic and strong-willed performance I think Prey would have been a lesser movie. I would contend that Prey is easily as good as Predator, and there is a very strong argument that it might even be better in many ways. It’s only a shame we never got to see this on the big screen. Superb entertainment.