1996 was a heck of a year for science fiction films. Not only did Tim Burton deliver one of the best alien invasion films in Mars Attacks!, Star Trek also gave us perhaps the best feature film in their long history with First Contact – pitting humanity against the inscrutable Borg – while Dean Devlin and Roland Emmerich smashed box-office records for their global phenomenon about invaders from another world, Independence Day. Obscured slightly by more prominent releases from that year sits David Twohy’s The Arrival, a lower-budget alien-centric movie starring Charlie Sheen in what would be his last truly significant film role before becoming essentially a parody of himself. Twohy, who would go on to make Pitch Black and the Riddick franchise films later, directs from his own screenplay in what is quite an absorbing story about one man’s obsession with a specific radio signal reputedly of unearthly origin, and the lengths he goes to to locate the source. 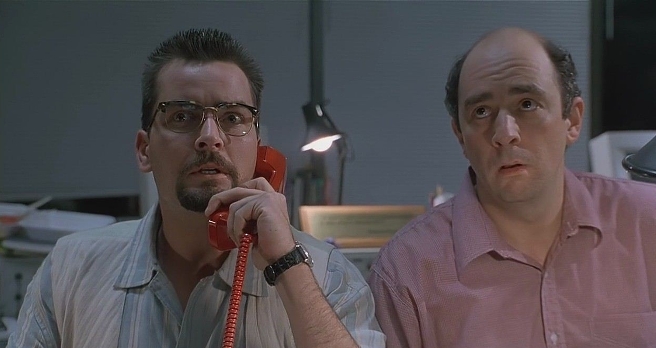 Sheen plays radio astronomer Zane Zaminsky, who inadvertently discovers an extra-terrestrial radio signal from a far distant star, witnessed by his radar array colleague Calvin (Richard Schiff), and presented before a disbelieving NASA boss, Phil Gordian (Ron Silver). Unceremoniously fired from his job, Zaminski continues to stake his claim of finding the signal, to the degree he sets up a makeshift radar array using television satellite dishes throughout his neighbourhood, which draws the attention of neighbourhood kid Kiki (Tony T Johnson). As Zaminski’s behaviour becomes increasingly paranoid, his girlfriend Char (Teri Polo) starts to distance herself from him, until the troubled scientist makes a trip to Mexico to follow a clue contained within a second broadcast, containing a terrestrial radio signal. Zaminski encounters climatologist Ilana Green (Oscar-nominated actress Lindsay Crouse), who divulges that the Earth’s climate is heating up far too rapidly for mankind’s impact on global warming, which prompts Zaminksi to believe that there is a far more insidious plot afoot, buried beneath the surface of a newly established power plant deep in the Mexican jungle. 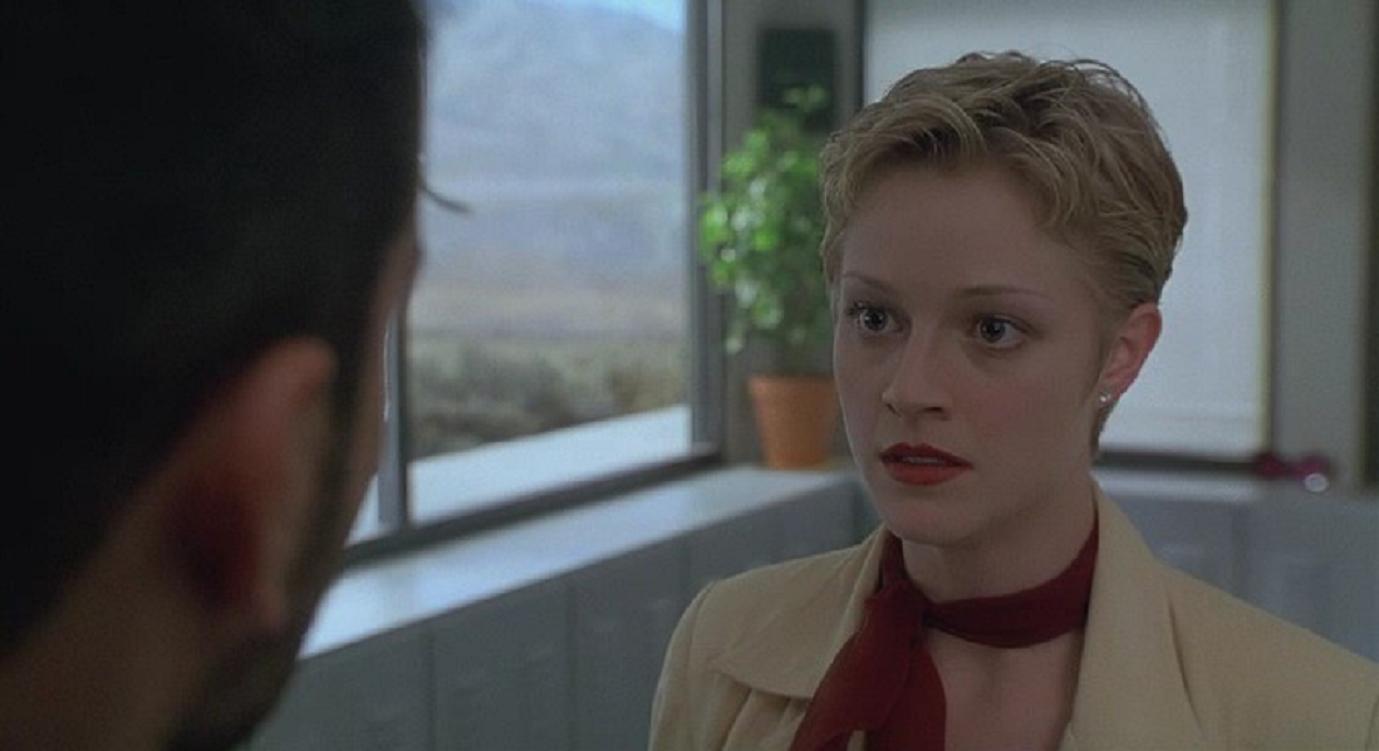 The Arrival is a completely generic sci-fi alien invasion opus. It presents a variety of genre tropes and plot twists in what might be considered a new and interesting manner, but it’s fair to say time hasn’t been kind to this film as it uses the threat of climate change as a neat canvas for the film’s central storyline. It’s a competently made film, and written in such a way that the plot’s “grand reveal” is as effective as is possible using now-dated mid-90’s CG effects, and if you’ve been paying attention for a bit you can see some of the story elements coming a mile away, but thanks to Sheen’s sweaty, discombobulated performance and a smattering of baffling creative choices I think The Arrival works just fine. The film never intends to change the world, but it succeeds in its primary focus of maintaining audience interest and intrigue and just a few moments of spine-tingling terror. 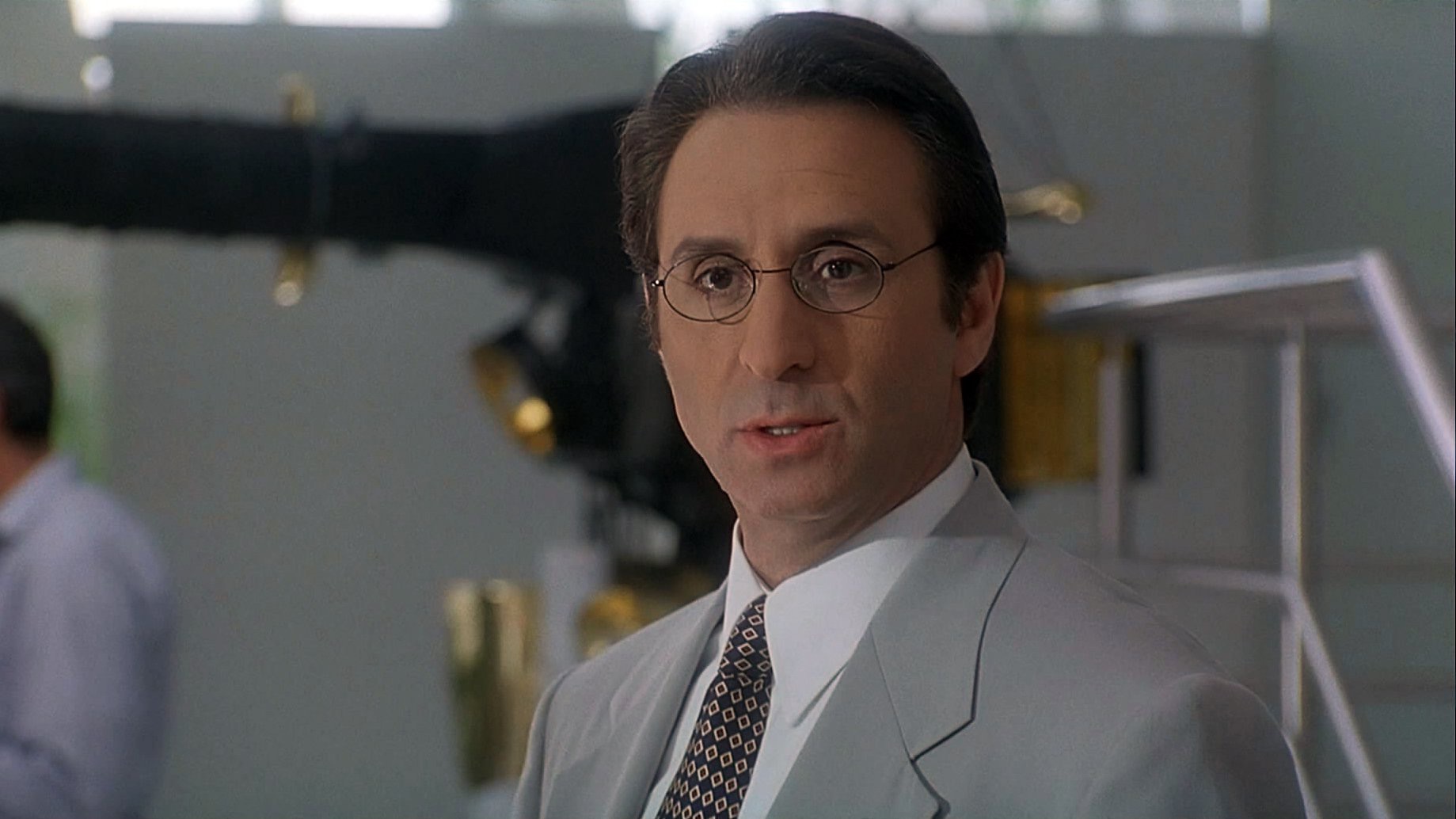 The film’s chief positive is the idea that in most alien invasion films we’re always looking up to the stars, when Twohy’s script posits that maybe we should simply be looking around us. Aliens are already here, the film declares, and their insidious plot is stripped away by one lone paranoiac with a penchant for satellite service installation. The film’s leaps in logic make little sense, but then neither should it considering the broad scope of Twohy’s radical premise made with such a respectable budget; Sheen’s character fits neatly into his performance style and makes the best use of his stammering screen charisma as often as possible, which goes a long way to making this film as accessibly benign as it ends up being. There’s conspiracy theories, bungling bureaucrats, evil authority figures, a pair of malevolent assassins pursuing Sheen’s Zaminski across the globe, and a precocious young lad who only wants to help, all classic genre jigsaw pieces carefully placed on Twohy’s checkerboard of plot mechanics that refuses to conform. Twohy is a clever enough director not to simply give up the game as soon as he can, cresting the mystery at precisely the right moment before Zaminski’s life truly goes sideways, and in maintaining a sense of wonderful mystique about the nitty-gritty of alien invasion the film’s slight charm is only magnified. 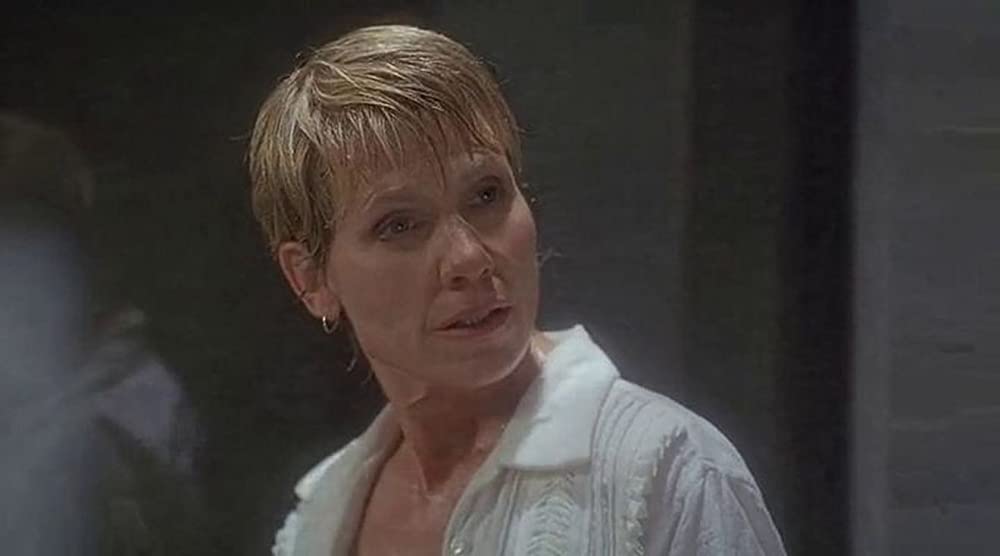 This film’s co-opting of Contact is readily apparent – a copy of the novel on which Robert Zemeckis’ film, which arrived in cinemas a year after The Arrival, is based can be spotted in prime position on a bookshelf at one point – but where this movie differs is with the approach humanity might take to the incursion of alien life on our planet. That similar themes are present in both this film and Zemeckis’ more commercial effort have perhaps led some to skip over this one in favour of a more mainstream project, however willing genre fans shouldn’t discount the subtext and themes present in Twohy’s effort either. Although an ungainly third act nearly threatens to undo a lot of The Arrival’s carefully constructed aesthetic and exposition, Twohy keeps things going through sheer force of will and a real flair for the creepy, as the film’s climactic showdown approaches. The screenplay makes statements about a variety of global ills – notably climate change, which was still in its public discourse infancy back in the 1990’s – and uses them as a plot device with such clever subterfuge you never feel you’re being preached at, but you are. 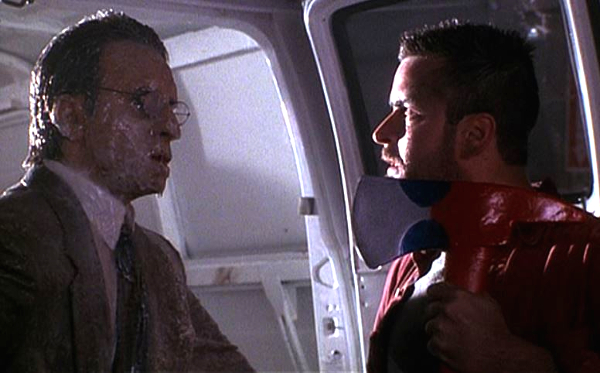 Charlie Sheen is, as always, Charlie Sheen. While not an actor of considerable range, Sheen once again proved that as a leading man he’s not bad choice to have in your film, with his easygoing charm and wry wit masking some of the cracks in his characters’ depth deficit. Teri Polo (Meet The Parents) plays his power-feminist girlfriend Char, a woman for whom work and play is a line that shouldn’t cross, and I thought her work here was well above average for what the script gives her. Second-billed Lindsay Crouse feels jarringly miscast as an American climate scientist pursuing data in central Mexico, and her intimated attraction to Sheen’s Zaminski isn’t as incendiary as the sweaty setting might otherwise induce. A surprisingly beardless Richard Schiff has a minor supporting role as a colleague of Zaminski’s and it’s practically a nothing, paycheck role, while Ron Silver followed up his malevolent work in TimeCop with an equally boo-hiss worthy villain here, playing Zaminski’s corrupt and in-on-the-plan NASA boss. Silver really does have a punchable face, and by the end of The Arrival… man, I wanted to punch his face. Perennial “oh, its that guy” character actor Leon Rippy appears as an assassin going around ensuring people don’t reveal the alien plot, while minor child star Tony T Johnson (North, Amen) has this film as his penultimate credit listing on IMDB; the kid is good, and natural as hell on-screen, but his turn as a smartass street-rat feels too on-the-nose for my liking. Nothing personal, but the part of Kiki is an acquired taste. 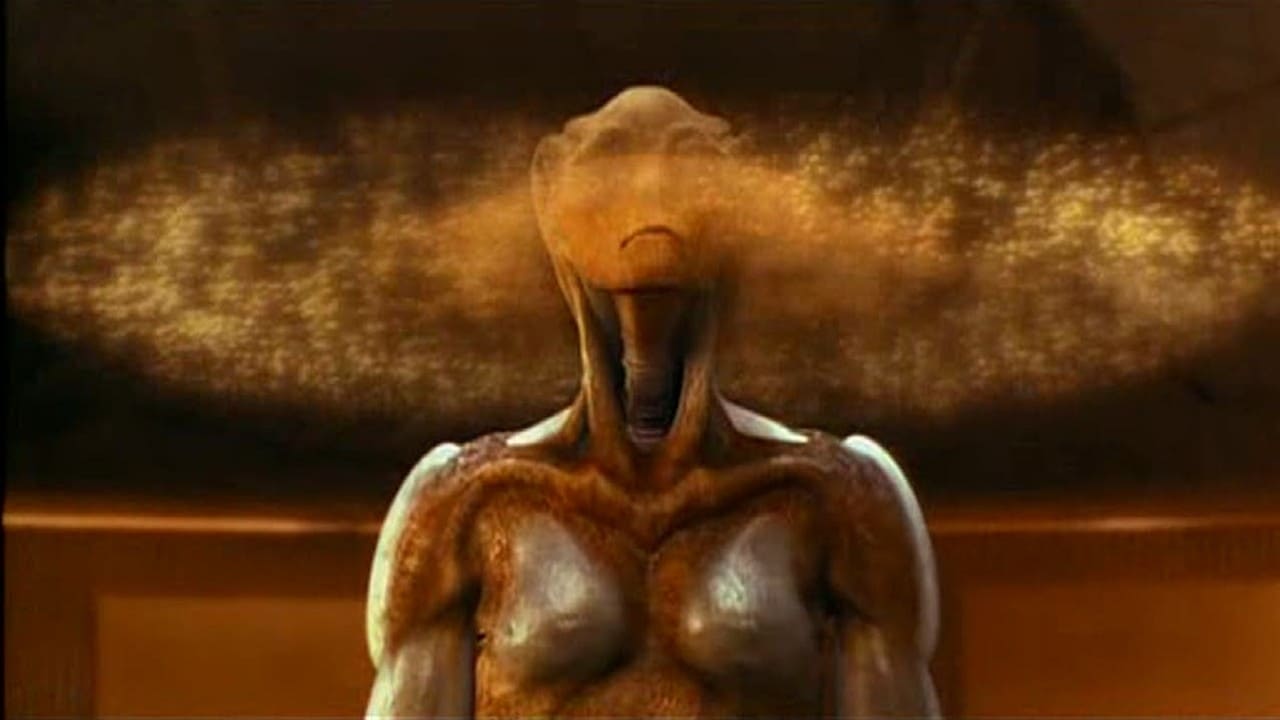 It may lack the bang-wallop expense of Independence Day, or the wisecrack smarts of Mars Attacks!, but The Arrival is a hidden gem of a sci-f outing that deserves a little more appreciation. It would sit comfortably alongside genre entries like Philippe Mora’s Communion (1989), Fire In The Sky (1993) or the aforementioned Contact, as a more cerebral examination of alien visitation than simplistic action and explosions. The plot aches for a higher budget, the script deserved a little more polishing, and the CG visual effects have dated quite poorly compared to the film’s 90’s contemporaries, which does it no service. And yet, for the mid-budget range in which The Arrival sits, I was thoroughly entertained, with some startling practical effects (a sequence involving liquid nitrogen had me gasping) and some pretty mediocre ones combining to elicit a meandering, if not entirely satisfying viewing experience. Even at only 115 minutes the film does feel a little long, a clumsy middle act that seems like it’s treading water in some parts, but taken as a whole I found Twohy’s little experiment in alien invasion quite the surprise.