The third in Scorsese’s early unofficial gangster trilogy, after Mean Streets and the Oscar-nominated Goodfellas, Casino is a bloated, often plodding crime drama that saw Sharon Stone inexplicably snag an Oscar nomination for her work as Robert DeNiro’s on-screen wife, Ginger. Clocking in at three hours, there’s a lot about Casino that works really well and a whole bunch of stuff that doesn’t, most notably the subplot involving DeNiro and Stone as marriage-of-convenience bickerers, which drags out the story to the point you just want it all to end in a hail of gunfire. As one might expect from the title, the film revolves around a Las Vegas gambling establishment from the 1960’s to the 80’s, where DeNiro’s character is set up as manager, and all the crime, underhanded dealings and mafioso-driven subterfuge that might engender, and when the film is about the casino life it positively sings. When Scorsese dips into sidebar territory, the film slips up. 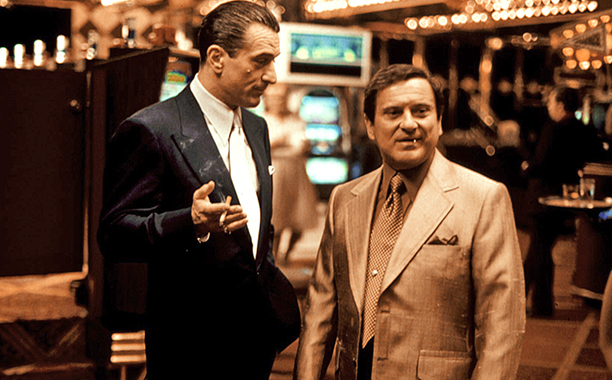 Plot synopsis courtesy Wikipedia:  In 1968, sports handicapper and Mafia associate Sam “Ace” Rothstein (DeNiro) is sent by the Chicago Mafia to Las Vegas to run the Tangiers Casino. Front man Philip Green (Kevin Pollack) serves as the casino and hotel CEO, but Sam unofficially runs everything. Sam quickly doubles the casino’s profits, with cash skimmed directly from the count room and delivered to the Midwest Mafia bosses. Chicago boss Remo Gaggi (Pasquale Cajano) sends Sam’s childhood friend and mob enforcer Nicky Santoro (Joe Pesci) to protect Sam and the casino. Nicky makes sure everyone is kept in line, but his own criminal activities start drawing too much media and law enforcement attention. He recruits his younger brother Dominick (Philip Suriano) and childhood friend Frankie Marino (Frank Vincent) to gather a crew that specializes in shakedowns, burglaries and jewellery heists. Sam meets and falls in love with beautiful hustler and former prostitute Ginger McKenna (Sharon Stone). They have a daughter, Amy, and marry, but their marriage is quickly thrown into turmoil due to Ginger’s relationship with her long-time boyfriend, con artist Lester Diamond (James Woods). As the net of corruption starts to close in as the FBI investigates the Tangiers’ operation, Sam and Nicky have to move quickly to protect their various interests. 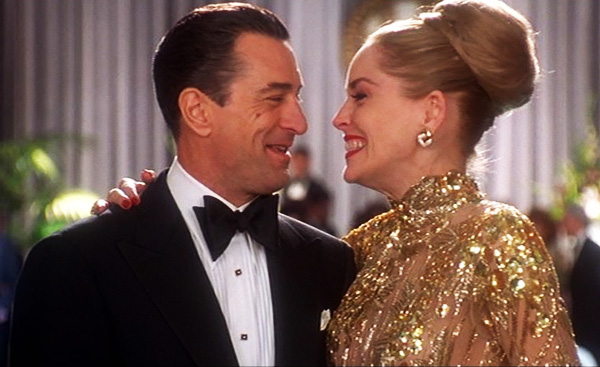 Sigh. I know, I know; I should love Casino. Directed by the maestro himself, co-written by Goodfellas scribe Nicholas Pileggi (from his own non-fiction book “Casino: Love and Honour In Las Vegas”), and starring a cast of A-list talent in almost every direction, you’d go into this film expecting something of a minor masterpiece. Unfortunately, Scorsese bites off more than he can chew with this off-kilter crime drama that aspires to be The Godfather but ends up being a jittery mess of ideas and tropes that never quite gel. Many have criticised Casino for being too close thematically and structurally to Goodfellas, and with near-continual voice-over narration and an episodic, somewhat documentarian feel to it all the propulsive first hour gives way to a more unsound, less potent final act, the strength of which isn’t so much in the story but more in how far can Scorsese push his audience. The central story – DeNiro’s Sam Rothstein as the master casino manager who spies every trick,  knows every grift and can handle any con – is the film’s honest to goodness strength, with Scorsese amiably pushing this aspect of it hard and fast early. The arrival of Joe Pesci’s interminably nasty Nicky, inexplicably a friend to the more morally centered Sam, is when things start to go downhill. Pesci is essentially playing the same violent, hate-spewing character he did in Goodfellas (way to typecast oneself, I guess) and the character is without redemption; this in itself isn’t a bad thing, but it’s his unrelenting hypocrisy and Sam’s failure to call him to account that makes the role so galling to watch. DeNiro and Pesci are dynamic together, but in this I felt the latter was a far less rounded character than the former, and even then DeNiro’s Sam seems to lack dramatic heft when he’s away from the casino floor. 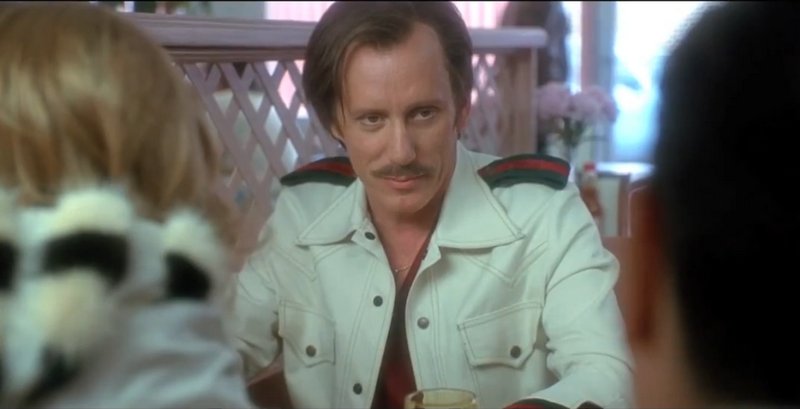 Sharon Stone’s work as Ginger is cause for concern here. Nominated for an Oscar, Stone’s character is the embittered, addicted drug-addled hustler who lures Sam into her honey trap before betraying his masculinity by turning him into a cuckold; the Sam/Ginger storyline is one of the main aspects of Casino I neither appreciated nor enjoyed, and found Stone’s performance a screechy, one-note caterwauling offset by a more measured and focused DeNiro. I’m sure there were real people like Ginger back in the day, just like this, but Scorsese limits the work’s competency by voiding her agency through unrequited character flaws. Marrying the Ginger subplot to the remainder of the mafia-led machinations of Casino’s political mainframe is a jarring piece of the puzzle, and one I felt didn’t work as strongly as it ought. You can almost feel her begging the Academy for an Oscar from in front of the camera, she commits to the role so effortlessly, and probably deserves one for one-upping DeNiro in the tantrum-throwing stakes, but as a sidebar element to an otherwise solid gangster movie it felt like too much stuffing in the roast turkey.

When the narrative focuses on the craft of casino management, and how the crime syndicates of the day operated almost out in the open, Scorsese’s direction and the acting positively sings. As a dissection on criminal influence benefiting off the decadence of the American dream, Casino is at times an absolute delight. DeNiro, as Sam, is perfectly cast (when isn’t he, let’s be honest) and I think he solidifies the film just when things threaten to go off the rails. Much like he did with Goodfellas, Scorsese populates the film with a variety of big name stars in supporting roles; James Woods plays Ginger’s pimp, Don Rickles as casino floor manager Billy Sherbet, Kevin Pollack as a crooked political aspirant, and veteran entertainment legend Dick Smothers as a vituperative senator all add gravitas and heft to this baity-type dramatic outing, and despite nobody really having a significant character beat to speak of there are truly no weak links to be found here. Hell, watching these guys acting is a joy in and of itself, at times. In quite the meta turn, Scorsese’s own mother appears as a woman upset with her on-screen son’s continual swearing; perhaps apropos of Casino being one of the films on the “list of films with the most uses of the word fuck”. Good one, Marty, good joke indeed.

Unfortunately, Casino runs into the problem of being just far too long. The sense of epic character journey Scorsese tries to imbue here feels padded out to bladder-testing limits, as we start in the 60’s and end up three decades later as the entire empire starts to crumble; the film has a lot of vignettes that add atmosphere or tension to the overall movie but, equally, a lot of it feels like filler. Good filler, but filler nonetheless. Thelma Schoonmaker’s editing is again one of the film’s stronger technical elements, cutting the copious montages and swirling camerawork with panache and narrative propulsion, abetted by the stellar cast all working at the top of their game. But not even she can turn the film’s wobbly midsection and painfully protracted third act from being a load of white gambling noise into a memorable climax for all involved. There’s explosions and brutal murders and a lot of comeuppance, but after two and a half hours of screaming, flashing lights and Sharon Stone’s gradual descent into toxic madness you can be forgiven for eyeballing the exit with regularity. In films like this there needs to be a sense of redemption, or at least catharsis for the central character – does Sam live or die by the sword of violence he carries throughout the film? – but strangely, Casino doesn’t quite deliver the expected denouement a three-hour film would warrant. In the end, you’re just… meh.

Populated with performances ranging from terrific (DeNiro) to the ordinary (Stone) and everything in between, masterfully shot by the legendary DP Robert Richardson, and edited with Schoonmaker’s driving sense of style, Casino should have been a lock for Best Picture or at the least more acting considerations than it ended up with. That it’s a three-hour journey into casino management through the aching 90’s lens of nostalgic pre-technology criminality and beset with iffy sidebar plotlines that add little to the main story other than grist for salaciousness’ sake, is perhaps indicative of the hubris Scorsese exhibited where the audience tolerance for people being shitty to each other isn’t always the most enticing thing to watch, and it forces Casino to quickly become a tiresome retread of gangster films of years previous. Cutting an hour out of the film would have made for a crisper, shake-n-bake gangster thriller that could have worked in any number of ways, but ill-formed or motivated characters and plodding, ancillary storylines hamstring the potential of what might have been a genuine classic of the genre.