Sentimental to a fault, and almost a carbon copy of the original to which it pays gushing homage, Jason Reitman’s earnest and cathartic sequel will please fans of the franchise in unexpected ways, while also setting the path up for the future. Understanding that we have lost both lynchpin cast member Harold Ramis (who passed in 2014) and original director Ivan Reitman (who died early in 2022, barely a few months after this film released), emotions run high with this nostalgic rebirth of a film property once considered box-office poison, with a climactic sequence that had this 80’s kid positively bawling like a baby as it tugged so many heartstrings. A clever balance between the old and the new, Ghostbusters: Afterlife proves the point that there truly is life in the old ghost yet, you only need affecting and heartfelt writing to revive it. Set decades after the events of the first two films, Afterlife takes place in the small town of Summerville, Oklahoma, where the financially struggling family of the recently deceased Egon Spengler (played in silhouette form by Bob Gunton) arrive to distribute his estate. Young scientific wunderkind Phoebe (Mckenna Grace), her older brother Trevor (Finn Wolfhard) and their slightly alcoholic mother Callie (Carrie Coon) arrive at the Spengler farmhouse, a dilapidated and creepy mausoleum to the former Ghostbuster’s enthusiastic collection of ghoulish and spectral studies, before it soon becomes apparent that a nearby mine, once closed down, is actually the burial site of Gozer worshipper Ivo Shandor, and evidently a portal to our world soon to be used by the returning supernatural spectre. Together with schoolteacher Gary (Paul Rudd) and conspiracy theorist student Podcast (Logan Kim), the Spengler family must recalibrate the proton packs and stamp on the ghost traps to thwart yet another supernatural apocalypse. The box-office failure of 2016’s abortive Ghostbusters: Answer The Call could be attributed to a number of defining factors. Among them, rampant fan misogyny, a sense of distance between the project and the original members of the team who originated the property, and concern that director Paul Feig, together with frequent collaborator Melissa McCarthy, would not be able to capture the same essence, the verisimilitude, of the original films. While the 2016 film does have its fans, I was not among them and in many respects I tend to agree that Feig and Sony completely missed the point of what made the property so beloved; the characters. The quartet of Egon, Ray, Venkman and Winston have become iconic 80’s figures and an indelible part of Ghostbusters mythology, and the fact that Feig’s film flat-out pushed them aside probably left a bad taste in the mouths of many fans. 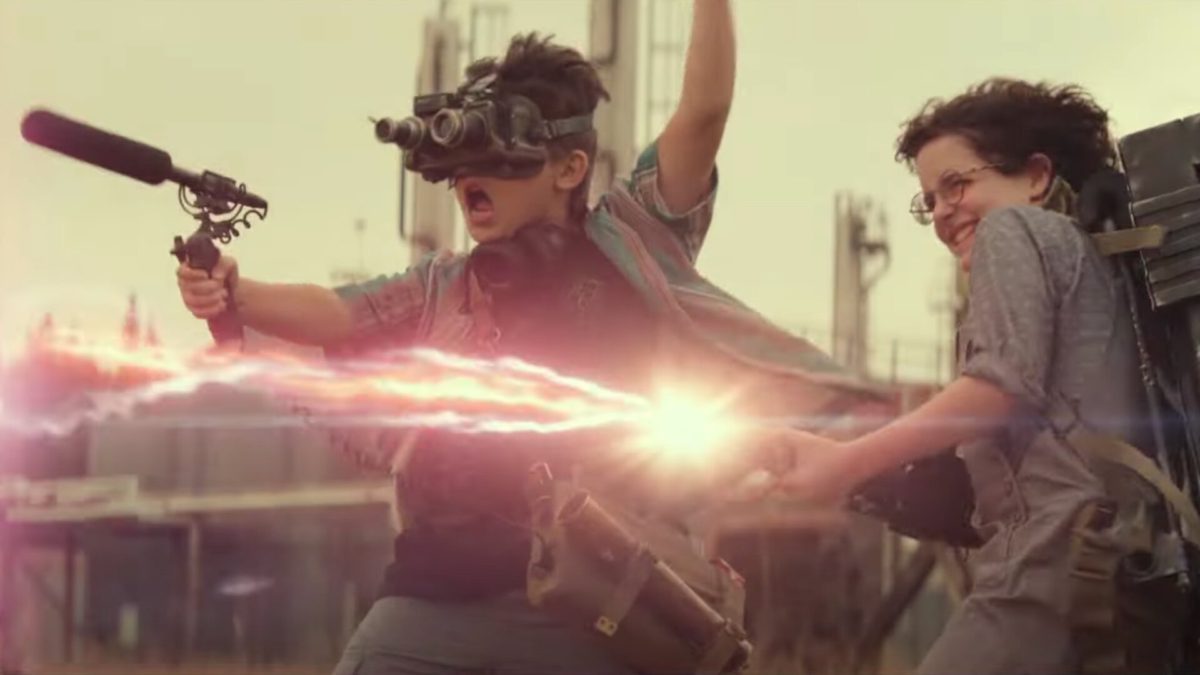 Afterlife, however, comes saturated with the spirit not only of the dear Harold Ramis, to whom the project is dedicated, but also the loving nostalgia of the original material, which plays an integral role throughout the film and ensures the links between both Ghostbusters, Ghostbusters II and now Afterlife are inextricably linked. Written and directed by Ivan Reitman’s son Jason, and co-written by Monster House and Poltergeist director Gil Kenan, Afterlife’s symbiotic links to the past are what ensures the franchise has a future beyond this entry; Egon Spengler’s family are utilised in such a way that the audience will feel they have a mandate to pick up the baton passed them by both Ramis and stars Bill Murray, Dan Aykroyd and Ernie Hudson, all of whom have significant cameos late in the film (as you’d expect), while Reitman’s pitch-perfect direction apes that of his father’s memorable work on the original movie. This is a film filled with love for both the characters and the franchise, and aims to connect 80’s dots with post-millennial modernity. It does so with something the 2016 film missed completely: heart. Leading the way is the talented Mckenna Grace, playing Egon’s granddaughter Phoebe. She’s the soul of the film, looking at the world with a clear-eyed simplicity and logical scientific mind, much like her grandfather, and it is she who picks up the clues to Egon’s untimely demise and what that means for not only Oklahoma but the entire world. Her on-screen pairing with Logan Kim’s hilarious Podcast, the modern equivalent of the real-life Dan Aykroyd’s kooky-conspiracy-theory nutter, is one of the more charming elements of the movie, while Stranger Things‘ Finn Wolfhard, now looking like an absolute teenager, has a briefly enthusiastic time with local girl Lucky (Celeste O’Connor) in a semi-cringeworthy infatuation subplot. Carrie Coon, although first billed, is the dull third wheel to the various sidebar narratives going on here; estranged from her father, Callie is embittered about Egon leaving them alone in the world and takes his death hard, although she refuses to show it. She’s the disbelieving matriarch to the Ghostbusters generational change, Elliot’s Mom to ET’s primal mission of hope as it were. Personally, I thought the Callie storyline and her burgeoning romance with Paul Rudd’s crackling schoolteacher Gary was the weakest part of the film, but even then it still works. As you’d expect the film comes with a sprinkling of both the old and the new. Gozer makes her reappearance as the film’s Big Bad (portrayed in physical form by an unrecognisable Olivia Wilde, if you can believe it), while the two demon dogs seen in the original film return in far more terrifying ways, and as always it’s a blast to watch the Ecto-1 screaming around the streets – even if it’s the smaller-scale streets of Summerville. The story really didn’t seem too concerned about explaining why the subjects of Gozer had to move all the way out to the conspicuously de-populated Oklahoman countryside, but I would wager its because shooting in New York City would be monstrously expensive today, with no guarantee of ROI. The stunning landscapes and gorgeous settings afforded to Afterlife by this change of location are breathtaking, and coupled with the best visual effects money can buy there’s a generous mix of old and new with this revamped movie. Jason Reitman really seems to understand the pacing and comedic complexity of Ghostbusters – perhaps his dad was sitting over his shoulder, I wouldn’t be surprised – and his direction of both the quieter family moments and the more punctuated action sequences is exemplary. A fanciful chase through Summerville’s main street between Ecto-1 and a metal chomping ghost is one of the key highlights of the film, capturing the danger, the sweet humour and the outright insanity of the scenario with glee. Throughout the film we’re repeatedly shown old videos and imagery of the original team, too. This foreshadowing is bit of a cop-out for something new but you just know the rest of the Ghostbusters will show up at some point – and they do – and I’ll be damned if I didn’t shed some quite significant childhood tears when they arrived at a key, crucial moment. The thing is, it’s all handled with respect for both the older characters and the audience who appreciate who they are – new audiences will understand because Reitman goes out of his way to ensure we understand the links to the past the film trades heavily in, whilst older audiences who grew up with only two Ghostbusters films for thirty years will immediately feel that deep cut of nostalgia for… to borrow another Dan Aykroyd line… getting the band back together. Is it mawkish sentimentality trading in commercial codswallop, or is it a loving tribute to the past with the future firmly in mind? Cynics may point to the former. Me? I’m sure it’s the latter, as the film draws laughs from long-standing franchise jokes and iconography without feeling like it’s stomping over our collective love for these characters. Hell, even a mid-credit sting, which isn’t particularly funny in and of itself, rekindles the spark of chemistry for the franchise despite knowing it’ll likely be the final time we see Murray, Aykroyd and Hudson don the famous overalls. With some tremendously entertaining new characters, plenty of nostalgic references to the original 80’s films, and more than a few surprises, scares and laughs, Ghostbusters: Afterlife is the sequel we wanted all along. Okay, it does tread old ground with perhaps a little too much insistency, but it more than makes up for that with the writing and direction of everything that transpires, a magnificent echo of the original film’s balance of horror and comedy and with more than enough childlike wonder to sink a Babylonian God. As you tap your feet to Ray Parker Jr’s memorable title track (not remixed…. thank God) and Rob Simonsen’s sublime orchestral score (which elicits strong Elmer Bernstein vibes, it really does) you could almost be forgiven for thinking the 2016 film was some distant nightmare of politically correct film-by-committee artistry.  Afterlife is the legitimate sequel we deserved, and will hopefully springboards future films with just as much attention and care.