Sadly, the sequel to 2017’s surprise hit, The Hitman’s Bodyguard, is a loud, obnoxious affair that feels like it has to scream its way through a nonsensical plot, increasingly ludicrous twists and turns, and one of Salma Hayek’s more awful, irredeemable performances. Laced with violence and inane humour, the preposterously titled Hitman’s Wife’s Bodyguard is an exercise in tedious action extravagance, lacking weight, import or a sense of reason: this is a film in which things just happen, for no reason, and with little-to-no purpose, wasting a solid cast, several half-decent action sequences, and a lot of beautiful filming locations in a quest to be the most annoying, most tone-deaf, most aggravating film experience of the year. Former Triple-A rated bodyguard, Michael Bryce (Ryan Reynolds) is on sabbatical, dealing with the fact that he is no longer a Triple-A rated bodyguard. Whilst on a tropical beach, he is recruited by the wife of Darius Kincaid (Samuel L Jackson), the lunatic Sonia Kincaid (Salma Hayek), who proceeds to inform him that Darius is involved in some kind of global plot to destroy Europe, thanks to the plans of Aristotle Papadopolous (Antonio Banderas). Senior Interpol agent Crowley (Caroline Goodall) tasks Boston-based intelligence operative Bobby O’Neill (Frank Grillo) with stopping Aristotle’s plans, inadvertently setting both the assassins and Interpol on a collision course.

This is a perfect example of a movie made without anyone ever asking the question “why?” Hitman’s Wife’s Bodyguard is an unmitigated disaster, a joyless brown flaming shit of a movie filled with screeching, obnoxious performances and ludicrous plotting. It’s a join-the-dots pastiche of post-modern irony, characters with limited import, and a mindless sense of desperate enthusiasm, riven by director Patrick Hughes, returning to helm this sequel, as he flails about controlling his surprisingly game cast, all of whom make utter fools of themselves. The story makes almost no sense, not even in the most wildest of fantastical “so bad it’s good” way, and the characters’ constant desire to obliterate all sense by screaming and howling their dialogue through a variety of “amusing” interactions is a torture test of endurance for the viewer. At it’s cheapest, Hitman’s Wife’s Bodyguard might satisfy the most undemanding viewer simply for reason of continued sidebar throwaway gags, but the film is a far cry from the small-scale earnest charmer the original one managed to be. 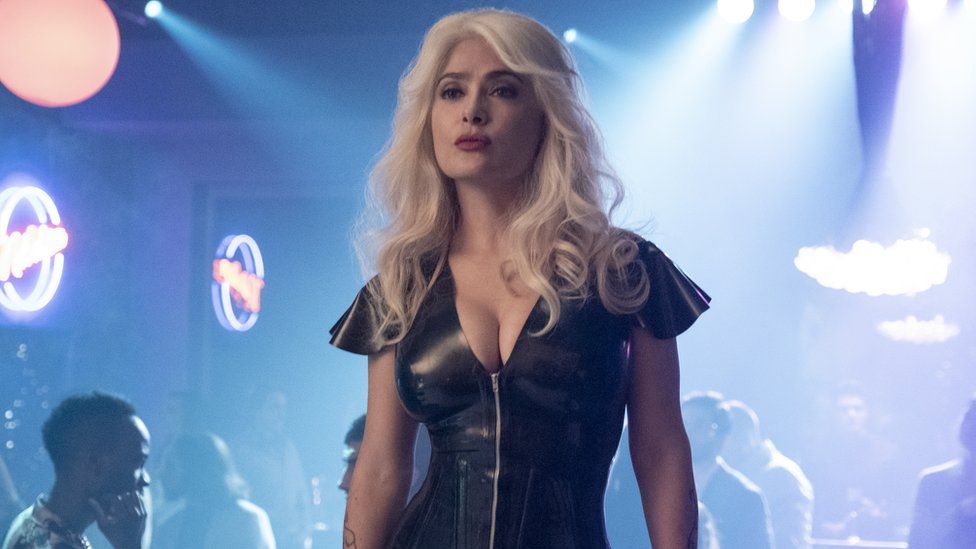 Written by returning scribe Tom O’Connor, together with Brandon and Phillip Murphy, the film’s plot plays like a kitchen-sink manifestation of all the tropes and clichés Euro-centric actioners have enjoyed down the years: think Jason Statham’s Transporter mixed with Hitman, mixed with Ronin and a load of Bond-esque nonsensical villainy. It’s a jigsaw puzzle of a screenplay, introducing supporting characters in a manner suggesting longevity before perfunctorily casting them aside for the majority of the film, focusing instead on the central trio of Reynolds, Jackson and Hayek to deliver the goods; try as they might, however, nobody comes out of this debacle intact. Decisions for characters in the film are treated with contempt for the audience, as parts of this hackneyed espionage-spy-thriller-bloodbath fail to connect with any other part, and travel well over the head of anyone willing to invest two hours to watch it. 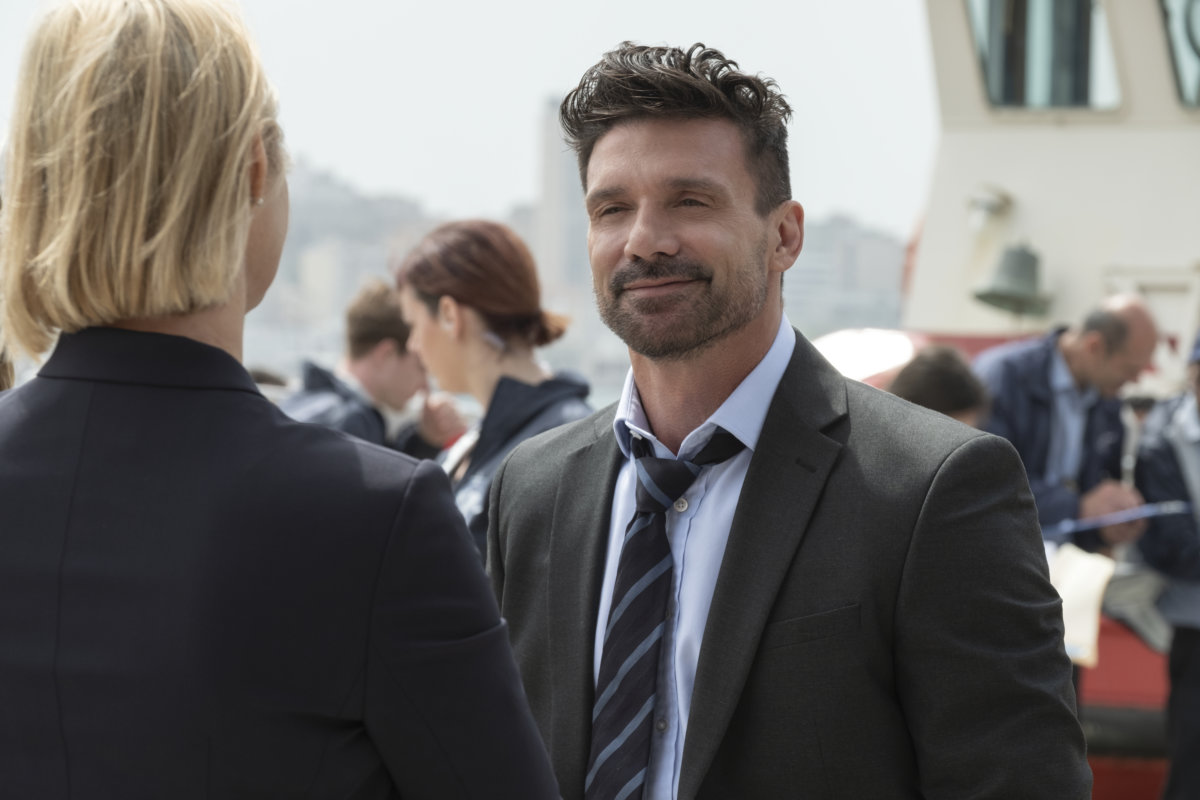 Reynolds, for all his charm, is a gormless idiot here, mugging for the camera and trying his best to play the straight-man to the Jackson/Hayek double-act of insanity. For their part, Jackson offers considerable use of his trademark “motherfucker” line delivery – overuse, one might suggest – while Hayek, easily the worst part of a movie filled with detestable film-making decisions, is utterly awful. Hayek has a beefed-up role in this sequel, with the film centering around her character instead of Jackson’s Darius Kincaid, and while the actress is given a fair leeway to just go bananas with ribald dialogue and an adult tone, her work on-screen here is one-for-the-ages terrible. Screeching, wailing and thrashing about in front of the camera is fine for certain actors, or for some characters who can utilise scatological humour to work around a central story, but Sonia Kincaid isn’t “main character” material – and she’s front-and-center here. She’s an affront to Hayek’s career, a disaster of a performance magnifying the deficits in screenplay credibility and her utter lack of rapport with Reynolds. Hell, even her on-screen reuniting with Desperado and Once Upon A Time In Mexico co-star Antonio Banderas, himself offering the performative equivalent of blowing a raspberry at the screen, is tepid at best; how do you cast these iconic Mexican actors together and give them a total of three minutes together on screen? They might have been “having fun” on set with these shenanigans, but the result for the viewer is a miasma of tone-deaf portrayals, nonsense action beats and terrible, derivative comedy. 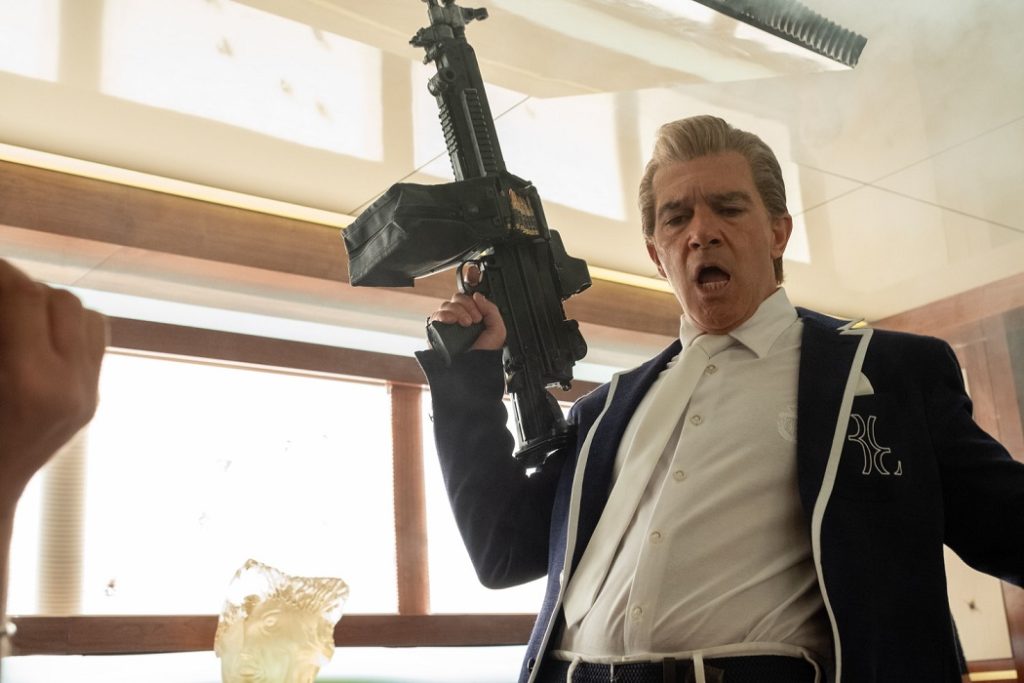 Supporting characters such as Frank Grillo (who sounds astoundingly similar to The Simpsons’ Moe Szyslak, it must be pointed out), Morgan Freeman (as Reynolds’ character’s father), Caroline Goodall, Rebecca Front and Tom Hopper (as another successful bodyguard and rival of Bryce) are completely, comprehensively wasted in their respective turns, the film given them (and us) nothing in the way of coherent arcs or narrative exactitude. Grillo looks for all the world like he’s in the wrong film, as does Freeman, whilst Tom Hopper’s Magnusson, a square-jawed uber-bodyguard is as bland as a box of cardboard. Even Richard E Grant, reprising his scabrous role from the previous film, appears to have been hastily filmed in a blink-and-miss-it cameo that is flat-out terrible. Nobody, not even the normally equitable Reynolds, gets out of this without a bloody nose; not a single character, line of dialogue or lurching plot twist ring with an ounce of credibility or truth, in a film designed purely as a mandate to film in some exotic locales. 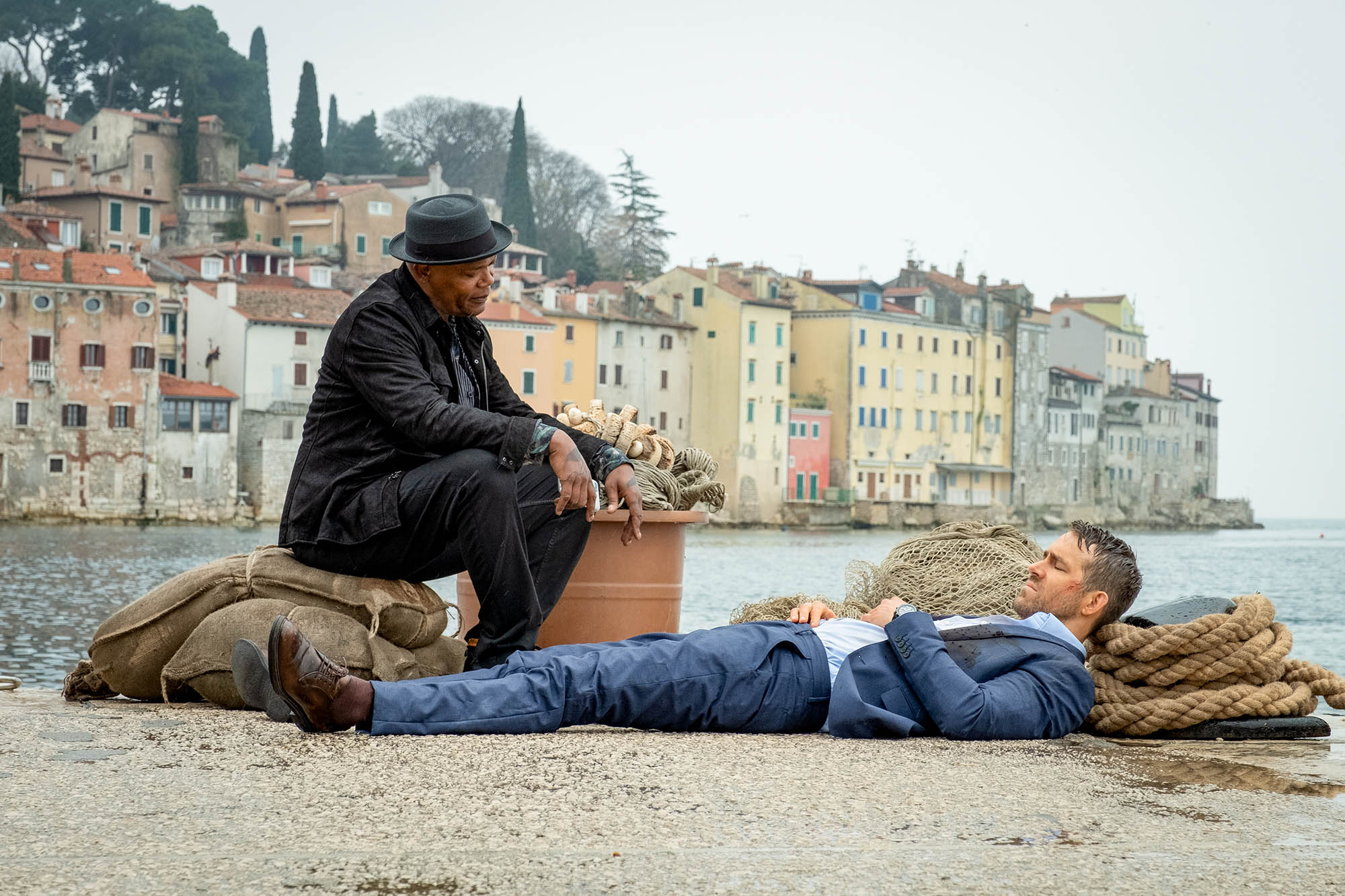 If that weren’t bad enough, Patrick Hughes’ direction is nothing short of migraine-inducing. The film’s blistering pace and an aversion to holding the camera steady, not to mention some truly hideous action sequences, make this a true chore, trying desperately to hide deficiencies in both story, character and direction with choppy schizophrenic editing and bombastic musical score (some of the needle drops are fun, many aren’t). To make a decent action film the viewer has to be able to see what’s going on, but Hitman’s Wife’s Bodyguard is nigh impossible to determine the choreography of any single scene thanks to ruinous cutting between fifty different camera angles, and Terry Stacey’s homogeneously colour-corrected cinematography.  Car chases, gunplay and wild, physically torturous brawls are a mess of frantic, jittery camerawork and bass-accentuated gunshots trying to hide the seams of this disastrously incompetent work, as if Hughes somehow lost the ability to generate any excitement or energy on the screen at all. This isn’t for a lack of trying, but one suspects that when restraint was mentioned in the production meetings they were laughed out of the room. Hitman’s Wife’s Bodyguard is execrable shit. It’s a ghastly, loud, asinine piece of junk cinema with few redeeming features. The idea of seeing Hayek and Banderas together is ruined, Reynolds doesn’t get the chance to really go for broke, and the supporting cast are all disparate pieces of a wider puzzle that never comes together. Samuel L Jackson actually looks bored throughout this, despite the film offering him his most go-for-it role to-date. At no point was this enjoyable. It was the exact opposite of enjoyable. This movie sucked.