Principal Cast : Ryan Reynolds, Walker Scobell, Mark Ruffalo, Jennifer Garner, Catherine Keener, Zoe Saldana, Alex Millari Jr.
Synopsis:  A time-traveling pilot teams up with his younger self and his late father to come to terms with his past while saving the future.

As it is for most, I suspect, time travel always makes the most fun time at the movies. It doesn’t always make much sense, but for simple shenanigans there’s nothing like playing around in, or with, time. The most iconic time travel film franchise, Back To The Future, is almost always referenced when it comes to this subgenre of sci-fi fantasy, and for very good reason: despite the various temporal flaws, it offers a clever, energetic and character-driven adventure story that weaves its way through history and the future, making it a legitimate family-friendly outing everyone can (and does) enjoy. Shawn Levy’s The Adam Project, which sees the director re-team with his Free Guy star Ryan Reynolds, is one such time-travel adventure story as well, a frivolously fun, delightfully written and generally malarkey-fuelled shenanigan that boasts a great cast doing all manner of timey-wimey conniptions in the most positive and light-hearted manner possible. That it knowingly references Back To The Future at one point indicates that it’s a film that knows exactly what it is, why it exists and how much silliness it can pull off before it becomes stupid, and thanks to both Levy, Reynolds and a surprisingly great performance by newcomer Walker Scobell in what I think is his big-screen debut, you’ll have a great time with it. 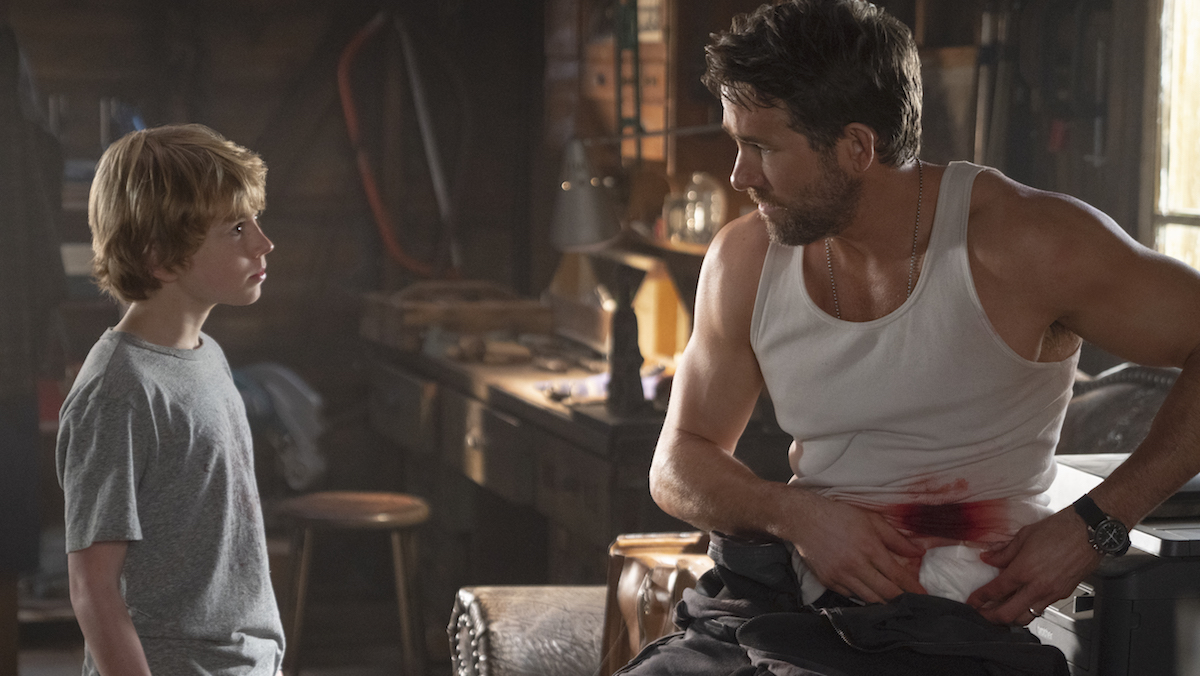 Plot synopsis courtesy Wikipedia: In a dystopian 2050, pilot Adam Reed (Ryan Reynolds) steals his Time Jet and escapes through a wormhole on a rescue mission to 2018. However, he accidentally crash-lands in 2022 instead where Adam meets his 12-year-old self (Walker Scobell) who is struggling with the recent death of their father Louis (Mark Ruffalo), and acts all tough and distant from his mother, Ellie (Jennifer Garner). Adam reluctantly enlists his younger self’s help to repair his jet and reveals that he is looking for his wife, Laura (Zoe Saldana), who was supposedly killed in a crash while on a mission to 2018. Adam is chased to 2022 by Maya Sorian (Catherine Keener), the leader of the dystopian world, and her lieutenant Christos (Alex Mallari Jr) who attempt to apprehend Adam and take him back to 2050. Mixing a grab bag of time-travel tropes, the tone of 80’s kids flicks Flight of The Navigator and The Last Starfighter, and Ryan Reynolds’ most banteriest of banters, The Adam Project is a lovely little time-waster that is effective, captivating and easily forgettable. Dropping squarely onto Netflix, and yet refusing to be one of the lower quality entries the streamer has given us over the years, The Adam Project’s bananas plot and superb chemistry between Reynolds and young co-star Walker Scobell makes it a chuckle-friendly blast. While the backbone plot isn’t the strongest, and some of the ancillary mechanics of the narrative don’t quite stick the landing, the film is held together on the strength of three things specifically; the dynamic between Reynolds and Scobell, the performance of Jennifer Garner, and the addition in the final act of Mark Ruffalo. As a film centralising a family component, the relationship between Adam Reed and his parents, and between he and his younger self, is the core of the film. In working this element of the film, Reynolds and Scobell shoulder the largest burden to achieving success, and they nail it. Particularly Walker Scobell, who is astonishingly good playing a younger version of Reynolds’ witty-banter silliness. Both Scobell and Reynolds have a sparkling on-screen chemistry, and the film sings whenever it focuses on them bonding and antagonising each other. Jennifer Garner has the hardest job of the film, treading a fine line between making Adam’s mother either a doormat or a complete bitch, since she’s wrapped with grief over the then=recent death of her husband, Mark Ruffalo’s particle physicist Louis. I thought Garner was fabulous in this, turning a pretty pedestrian role and turning it into something truly moving. Zoe Saldana, as Adam’s time-missing wife Laura, is a central figure in the story but has a limited physical presence in the film – she’s not bad or good, she’s just there – and Mark Ruffalo’s appearance later in the movie is a real blessing to the movie just when things are seeming the darkest. Catherine Keener, as the film’s villain, is one of the weaker elements, and the choice to digitally de-age her in the film’s final act is quite possibly the worst example of this kind of tech used in a modern film in recent times. She’s solid enough but her character is ill-fitting and poorly developed to generate the kind of plot The Adam Project utilises. 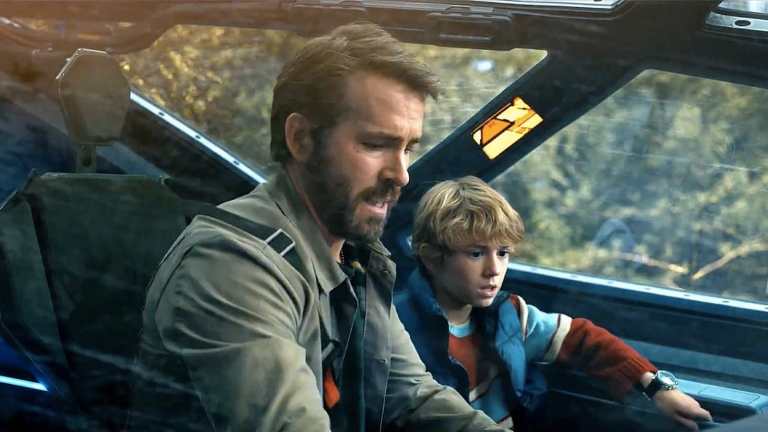 If you’re hee-hawing on whether you like Ryan Reynolds’ style of humour or not, The Adam Project sees the actor turned up to maximum shtick, his repartee and verbal sparring with Scobell is the film’s strongest aspect. I think Reynolds is hit and miss at times, but this film is a definite hit for the actor who barely has to get out of first gear in a lot of his recent stuff. He and director Levy seem to work well together, and between this and Free Guy I think a nice little working partnership appears to be forming. As I type this, Levy has been announced as the director of the third Deadpool movie for the MCU, which would see him once again work with Reynolds for the star’s flagship role, and to be honest I see this as a net positive. Having Levy take a shot at a more mature feature film – the director is known for his lightweight cross-generational fare more than anything dramatic or “adult” – would be a nice change of pace, and in as much as The Adam Project certainly fits into his well-trod inoffensive wheelhouse, giving the man some edge to push the boundaries might generate something truly special. The Adam Project isn’t a film you’ll remember much about in six months, but for what it is, and for how effectively it delivers some sweet-as-pie fun and generic, hyper-produced action, it’s good enough. 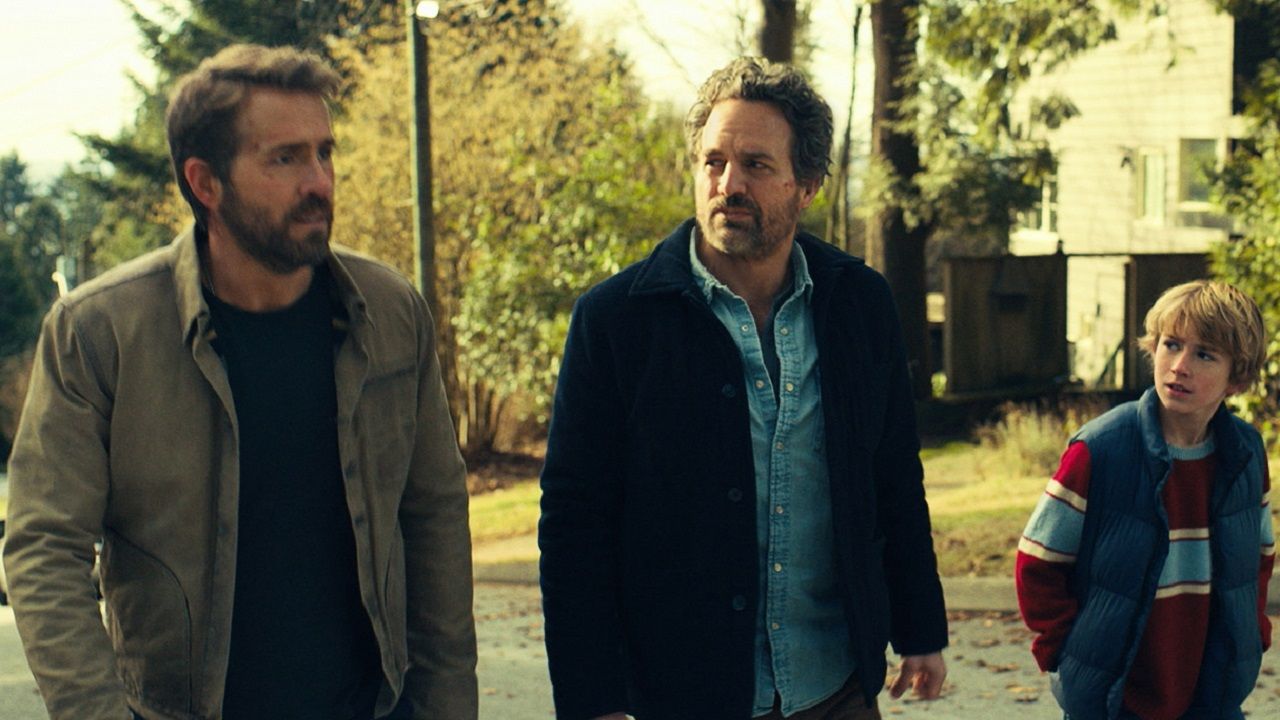 The Adam Project’s main selling point is the element of time travel. It does this, but it’s not the key factor that makes the film as enjoyable as it is. Time-hopping shenanigans make up but a minor aspect of the film’s heartfelt narrative, spending more time dwelling on Adam Reed’s family trauma and angst, be it either in the form of Reynolds or the younger Scobell. It’s a blast of family friendly fun, a wish fulfillment story tempered by layered performances from the entire cast (particularly Jennifer Garner, who delivers one of the most heart-breaking motherhood monologues in any film this year, sitting at a bar) and Levy’s enthusiastic if entirely generic direction. There are very few surprises in The Adam Project in terms of story, but there are in regards to performances. Walker Scobell is a rising star and natural comic, Ryan Reynolds does his one-man sarcasm act to perfection, and Mark Ruffalo is gruffly effective as the Adams’ brainiac father. The comedy, the action, the emotional heft of The Adam Project are all wonderfully done; had the plot been a touch stronger or better woven into the film it would have made this an instant classic. Instead, it’s a darn fine film that most people won’t remember this time next year, sadly.