Astonishingly awful, Cosmic Sin enters the Church of Bad Movies and takes a squalid, steaming dump on the altar. That is stars Bruce Willis yet again sleepwalking through another truly risible paycheck role isn’t a surprise, nor is the fact that poor Frank Grillo, an actor with at least a modicum of self respect to actually want to appear in this, continues to appear in shlocky, D-grade efforts like this much to my chagrin, but that the whole effort feels so abysmally poor, so addled beyond belief, you almost can’t help but feel sorry for all who gamely put their names to the credits of this pile of shit. Sci-fi is a genre that opens humanity up to seeing the best of ourselves, to rising above the odds and travelling the cosmos doing the things we do. Cosmic Sin is a legitimate sin against the genre, an action film without discernible action (despite innumerable action scenes) and most assuredly lacking any kind of coherence amid the countless closeups and mid-shots; about the only thing worthwhile in this gargantuan intellectual colonoscopy are the visual effects, most of which are out of focus and require squinting at to see properly, but at least they look like somebody spent a few dollars on a computer to make the film look effective. 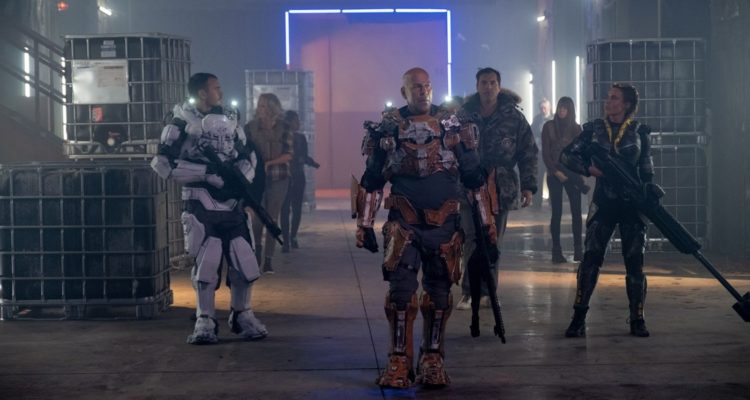 Cosmic Sin betrays its low-budget feel by being absolutely terrible. With a story (such as it is) that borrows a little from Starship Troopers and (if you can believe it) Independence Day: Resurgence, director Edward Drake fumbles his ill-paced, badly shot and shoddily acted sci-fi actioner with the panache of a man ill-equipped to dealing with things like story, character and a sense of threat. About five hundred years in the future, mankind is attacked by a marauding society of parasitic alien beings using interstellar travel to kick off a war. In order to fight back, the Earth government sends a black ops team to deliver a highly powerful Q-Bomb – a Coke-can sized weapon that sets off a black hole capable of destroying a solar system – to the alien homeworld, only to find themselves blown off course by some kind of unseen force. Stranded on a human outpost planet the aliens soon learn discover the team’s mission and plan to send an armada to thwart them. Standing in their way? A bored and lifeless Bruce Willis, as combat veteran and one-time genocidal maniac James Ford, accompanied by mission commander Eron Ryle (Grillo) and a variety of douchebag compatriots. 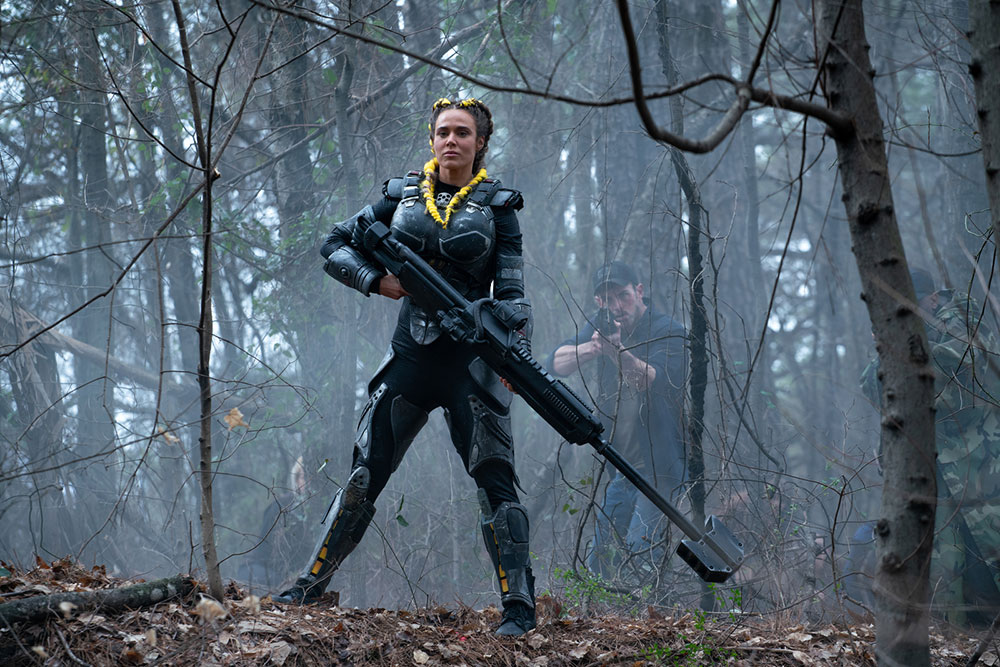 There’s a truism in Hollywood that a lack of finance forces creativity: films made with low budgets can look cheap and yet still deliver the good for audience entertainment, with directors and production staff having to use creative methods and techniques to pull off whatever crazy stuff a script might demand. Edward Drake isn’t capable of that: Cosmic Sin makes the unforgivable sin of blowing its proverbial load on crappy visual effects and leaving nothing for a decent cast or set design. No doubt the lure of Bruce Willis making his way off the couch to further blot his late career filmography with yet another dead performance, this time shouldering some kind of inexplicable Decepticon armour for the majority of the movie, was enough to get this hideous script some financing, but faced with a lack of funds and a story that demands a widescreen canvas, Drake’s ability to create something memorable goes awry.

Cosmic Sin had at least the kernel of a good idea for a story. Alien invasion plot devices always sell, and if told right the viewer will forgive tropes and cliches aplenty in the name of good, solid action and thrills. The film opens with some kind of galaxy spanning prologue told through title cards – a little like Blade Runner only without the panache – before we’re thrust into a good old ragtag team of soldiers sent to deal with a threat (if only they can get along, natch!) and the movie becomes a tiresome, tired slog through poorly lit production design and a decidedly insular cinematographic aesthetic.  The film’s space-bound visual effects look starkly different than that of the ground-based shenanigans, almost as if they belong to a different film. Were the visual effects not entirely out of focus most of the time, or mired in lens-flare and shitty framing, one could argue the film might be worth the price of admission for those alone. The rest of the film looks like it was shot in a warehouse saturated with dull neon lighting, with DOP Brandon Cox absolutely refusing to shoot anything closer than a mid-shot of any given character. Admittedly the alien -human effects on Earth look good, and feel quite scary (if overly familiar), but when our team traverse the cosmos and encounter alien creatures on a far distant planet, they all look like shitty cosplay bangers without an iota of presence between them. 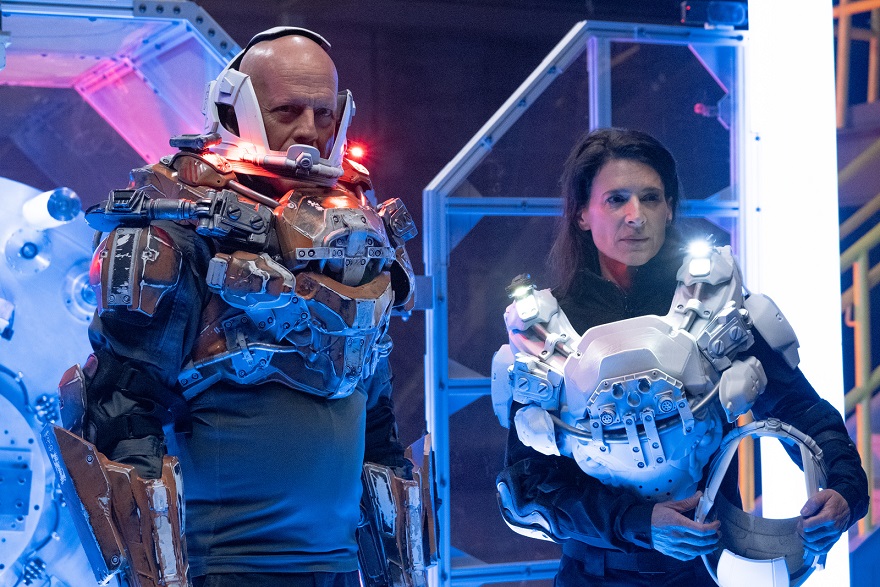 The characters are afforded little luxury to develop beyond simplistic stereotypes, and terrible ones at that. Grillo and Willis have a total of about one entire scene together and even that’s dreadful, so livening up proceedings is left to bit-part supporting players like CJ Perry, as scrubber mechanic Sol, Brandon Thomas Lee, as Grillo’s on-screen kid Braxton Ryle, and Costas Mandylor, as a weather old salt set to take the fight to the aliens, as Marcus Bleck, to deliver minor (very minor) moments of levity and/or pathos as the script demands. Unfortunately, neither the performances can elevate the dire dialogue and plot exposition, and Edward Drake performs an actual exorcism of ability to direct coherent scenes of human interaction: had this film been released ten years ago I’d have figured it to be an Asylum production, but it isn’t. There’s no sense of place, no visible style (other than dark and stupid) and certainly no creative eloquence to be found in Cosmic Sin, which, were it to be retitled more accurately, ought to be called Colonic Shit, because that’s what it felt like to watch. Avoid Cosmic Sin at all costs, it’s arguably the single worst film of 2021.