Hard as it might be to believe, but there was a time before American Pie when feature film teen-sex-comedies weren’t as prolific as they are now…. well, were then… well, okay. When American Pie was released in 1999, it had been some distance between the halcyon days of such 80’s classics as Porkys, Revenge Of The Nerds and Fast Times At Ridgemont High, all staples of the home video market that were as salacious as they were sexy. The film was a breakout hit, grossing over $200m globally off a reputed production budget of just $11m, and made stars of Jason Biggs, Tara Reid, Alyson Hannigan, Chris Klein, and Seann William Scott, and several sequences and lines of dialogue remain embedded in the cultural lexicon – MILF, for example, is ubiquitous, whilst the scene in which Bigg’s Jim is busted by his dad (a hilarious Eugene Levy) screwing an apple pie became the defining memory of uncomfortable sex encounters for nearly a decade. 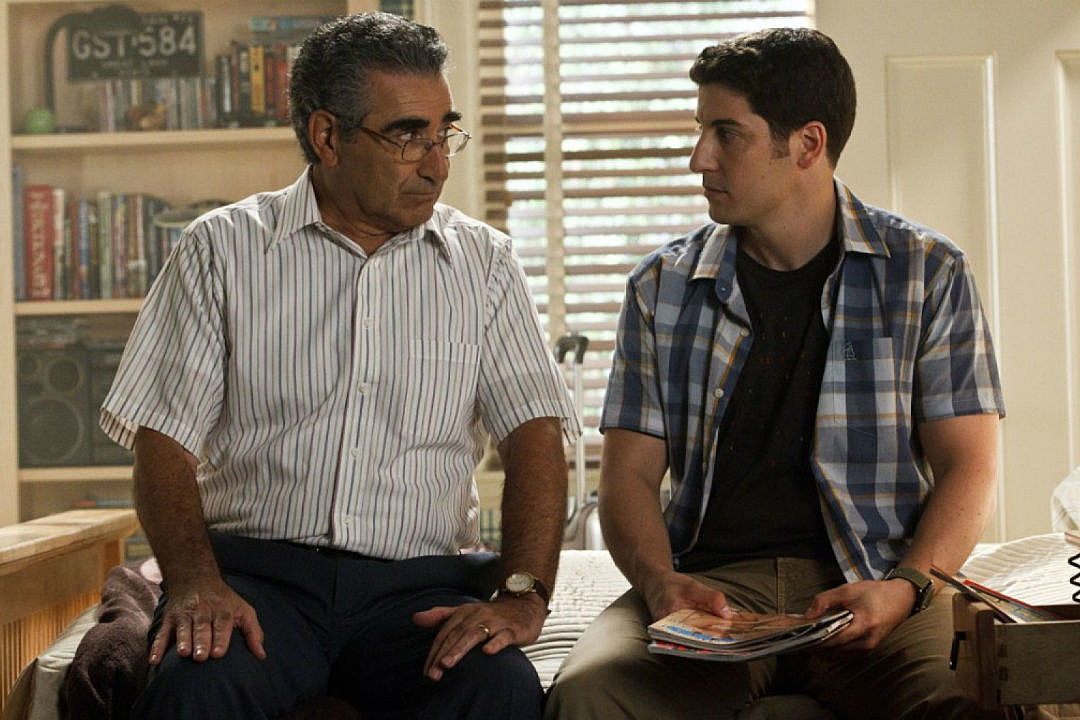 High-school seniors Jim (Jason Biggs), his friends Oz (Chris Klein), Finch (Eddie Kaye Thomas) and Kevin (Thomas Ian Nicholas) are all about to graduate. However, they soon realise all four are yet to lose their virginity: desperate to achieve manhood before leaving for college, the quartet decide to embark on a mission to score with various girls prior to (or on the night of) prom. Kevin, who is yet to go all the way with long-time girlfriend Vicky (Tara Reid) discovers a secret manuscript allowing him to bring her to pleasure she herself is yet to encounter. Oz decides to hone in on the school choir for his field of play, finding a budding relationship with Heather (Mena Suvari). The bookish Finch decides to bring the girls to him, paying resident sexpert Jessica (Natasha Lyonne) to spread rumours about his physical prowess in order to lure a mate. Jim, meanwhile, focuses on foreign exchange student Nadia (Shannon Elizabeth), with a problematic zoom call the least of his worries when resident band camp member Michelle (Alyson Hannigan) takes a liking to him. 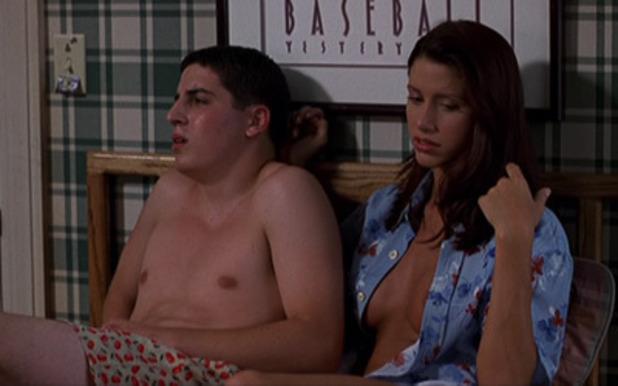 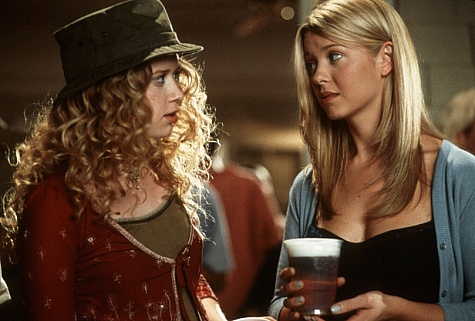 In some form, American Pie is a crass, exploitative “boys will be boys” example of sexism and misogyny at its finest. The film’s second-most famous sequence, in which Jim unwittingly sends a secret video stream from his computer to the school community prior to seducing a semi-naked Nadia in his bedroom, is both gut-bustingly hilarious and incredibly creepy – today, this scene would likely never make it past the first draft – and in retrospect the leering, jeering throngs watching on feel icky in the extreme. To the detractors of American Pie’s wantonness and explicit dissection of teenage sexuality (despite most of the cast being much older than their screen counterparts) I’d say that the film doesn’t really come across as mean-spirited, which goes a long way to salvaging the uncomfortable notions we’d now regard with disgust. All of the characters come across as lovable, even the repugnant Stifler amazingly enough, which thwarts much of the overly promiscuous thematics some might find problematic. 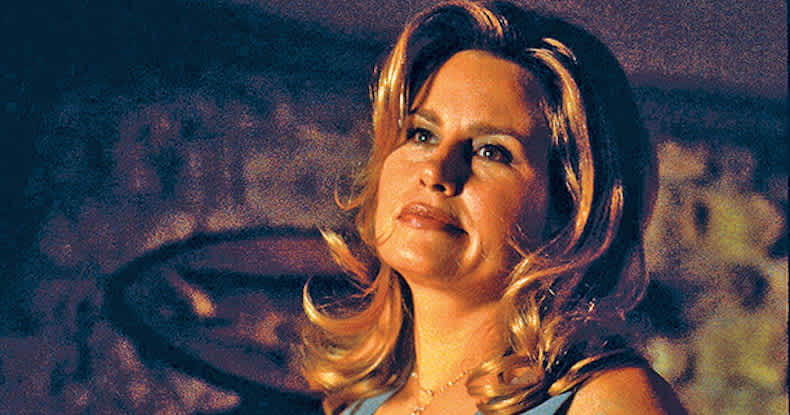 Themes aside, the film hangs on the charisma of the cast, and almost all of them pull off the remarkable without a hitch. Jason Biggs’ straight-laced Jim is a wince-inducing mirror image of my own teenage years, Chris Klein’s magnetic screen persona overcomes the actor’s shortcomings with dialogue, while Eddie Kaye Thomas’ Finch is a blithe precursor to Big Bang Theory’s Sheldon Cooper with a bent towards refinement. Poor Thomas Ian Nicholas, however, is lumbered with the unfortunate sidebar arc with Tara Reid, as the nervous and “it has to be the right moment” lovers who’ve never gone all the way. Nicholas is not the world’s greatest actor but the film needed somebody who could elevate the unenthusiastically wooden Reid, who looks sweet but is as believable as a plank of wood (pardon the sex pun); the pair have exactly zero chemistry together, and although Tom tries he is arguably in the weakest of the central storylines and whenever things rely on the Kevin/Vicky plot the film grinds to a halt. 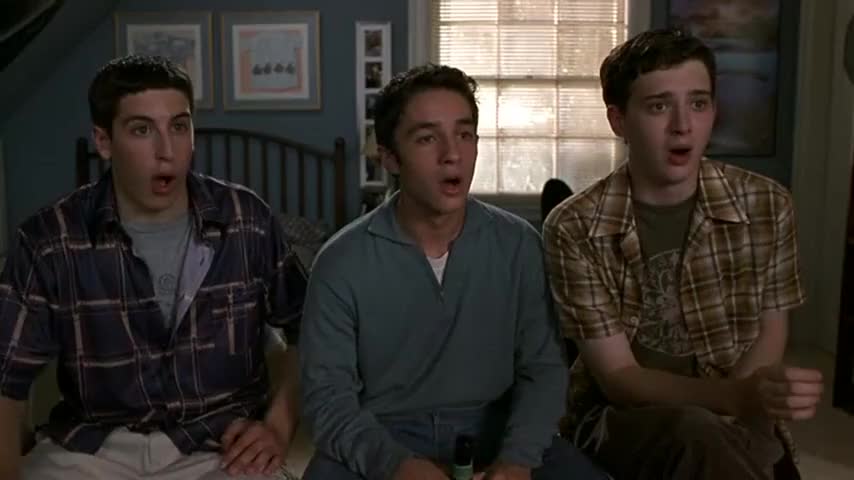 It should be noted that there are a number of strong female roles in the film as well; Natasha Lyonne fulfils the knowledgeable feminist intellectual role, Alyson Hannigan has arguably one of the funniest lines in all of cinema after a prolonged buildup, Shannon Elizabeth is delightfully sexy as the goddess Nadia, and Mena Suvari plays the self-assured and worthful Heather with a mixture of resigned distaste and doe-eyed coquettishness. None of these woman take a backwards step in the film either, finding their footing amid the ribald language and sexualised scenarios the plot throws at them. Supporting roles really nail home the comedic shops with Eugene Levy, as Jim’s Dad, and Jennifer Coolidge as Stifler’s Mom (the aforementioned MILF and eventual object of Finch’s desire), as well as Molly Cheek as Jim’s bewildered mother, all providing an older counterpoint to the underage shenanigans. Levy, in particular, is eye-wateringly great as Jim’s cringeworthy dad, whose obliviousness to just how awkward his birds-and-bees chats continue to be is one of the film’s great highlights. 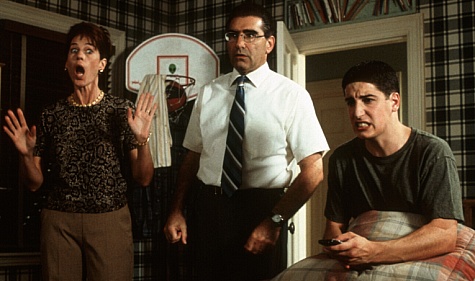 With a smattering of nudity, plenty of gross-out moments (a scene in which Stifler enjoys a beer containing a very specific bodily fluid is particularly gut-busting) and an overall sweet-natured sense of heart and soul, American Pie remains the defining teen comedy movie of the modern era. Its impact on modern cinema cannot be understated; not only did the film spawn a number of sequels and spin-offs of its own, it also helped reinvigorate the genre and set in motion countless imitators and rip-offs, none of which managed to achieve the same status of cult classic as this, the pastry-infused original. American Pie is a hilarious, ribald venture into disgraceful behaviour told with such warmth and wit you can’t help but be enamoured with it.