Legendary Hollywood writing icon Aaron Sorkin has established his particularly verbose style over many, many years behind the camera. He’s written plays (A Few Good Men), television series (The West Wing, Newsroom) and many, many movies (The American President, Enemy of The State, Charlie Wilson’s War, Moneyball, and of course his Oscar-winning screenplay The Social Network), but he’s rarely stepped up to direct. His debut effort in that regard was Molly’s Game, back in 2017, which met with critical praise but an unfortunate lack of box-office return. His latest all-writing, all-directing effort is his sophomore effort, The Trial Of The Chicago 7, a true-story filtered through Sorkin’s precise penmanship and assured visual style, and not only does it come with significant critical praise and noteworthy performances, it is also incredibly powerful and resonates in a way that attracts more awards. Led by some almighty performances from this incredible ensemble cast – something Sorkin writes for better than anyone else alive – the director plunges us into the political turmoil of the Vietnam War, and the quite stark depiction of crooked police, a crooked judge, and a government seeking to quash a rebellion growing in momentum. Rather like today, really.

In the Summer of 1968, the Democratic National Convention is due to occur in Chicago, Illinois, where a gathering of protesters plan to disrupt the media discourse around the increasingly unpopular Vietnam War. Several various protest leaders, including members of the Students For Democratic Society, The Black Panthers, the Youth International Party, and the National Mobilization Committee To End The War In Vietnam, make preparations prior to the event. Nearly six months later, and eight alleged agitators face trial for conspiracy: Tom Hayden (Eddie Redmayne), Abbie Hoffman (Sacha Baron Cohen) and his associate Jerry Rubin (Jeremy Strong), Lee Weiner (Noah Robbins), John Froines (Daniel Flaherty), and Hayden’s chief lietentant Rennie Davis (Alex Sharp), whilst Black Panther member Bobby Seale (Yahya Abdul-Mateen II) defies the court in the absence of his unwell – and absent – counsel, berating and agitating presiding Judge Julius Hoffman (Frank Langella) with increasing ferocity. The seven defendants are represented by lawyers William Kunstler (Mark Rylance) and Leonard Weinglass (Ben Shenkman), whilst leading the case for the United States Government is Federal prosecutor Richard Schultz (Joseph Gordon-Levitt) and his boss, Chief Prosecutor Tom Foran (JC MacKenzie. As the trial progresses, it becomes increasingly obvious that the Judge is severely biased against the defendants, making a fair case impossible, even when former US Attorney General Ramsey Clark (Michael Keaton) takes the stand for the defence.

Oh, how I wish I could write with the confidence of Aaron Sorkin. The man is a master of words and dialogue, as proven countless times in the last few decades with his screenplay successes. The Trial Of The Chicago 7 is a story that lends itself perfectly to Sorkin’s mellifluous words here, with its sprawling ensemble cast, ripe political nuance and astoundingly withering portrayal of events both then and now; the film absolutely could not have foreseen the events of January 6th, 2021, when rioters stormed the steps and halls of the US Capitol, and there are horrifying echoes of those events in  watching this film after the fact. Prescience may not be a trait exhibited by many of Hollywood’s modern writing stable, but Sorkin appears to be a master of it. You simply couldn’t have conceived of a film so pointed in its excoriation of political collusion and America’s police-versus-public confrontations landing so perfectly among audiences today, at this moment in time. The film takes real-life events and people (some of whom are still alive at the time of writing this review) and distils it down into an angry counter-culture, liberal screed against Government oppression, fuelled by winning performances and a truly chilling antagonist role from Frank Langella. 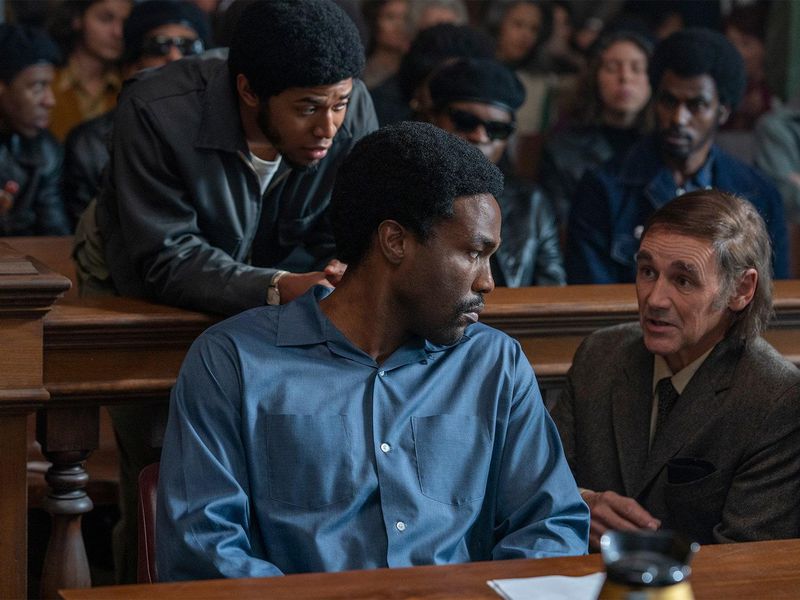 In America, people are wrongly accused, convicted and sentenced all the time. Justice isn’t always perfect, but accusations leading to conviction, based on evidence so overwhelmingly manufactured or biased should never be the cause for a person’s incarceration. Assuming most people aren’t that familiar with the real trial that took place over 60 years ago, Sorkin wisely keeps some of the case’s plot twists hidden until the last moments, building up from the “are they guilty or innocent” opening stanza to the climactic “You can’t handle the truth” finale. That’s a little Sorkin joke, there, folks. Hope you caught it. The film doesn’t even struggle to introduce and continue to develop each of the eight defendants, giving them all rounded and complete arcs within the movie, although obviously attention is paid moreso to Sacha Baron Cohen and Eddie Redmayne’s two leads as you might expect. The eccentricities of the supporting players – from Mark Rylance’s enormously discombobulated (and unfortunately named) lawyer, William Kunstler, Michael Keaton’s late-game cameo as former US Attorney General Ramsey Clark, to Kelvin Harrison’s magnetic-but-brief turn as Illinois Chapter Black Panther leader Fred Hampton (who was executed by Chicago police whilst the trial was taking place, seemingly as retribution for aiding defendant Bobby Seale) – add to the tapestry Sorkin weaves with ease, and even the really really lesser lights, the guards and background actors in the edge of frame, all seem to feel right for the movie’s distinctly mahogany hue. 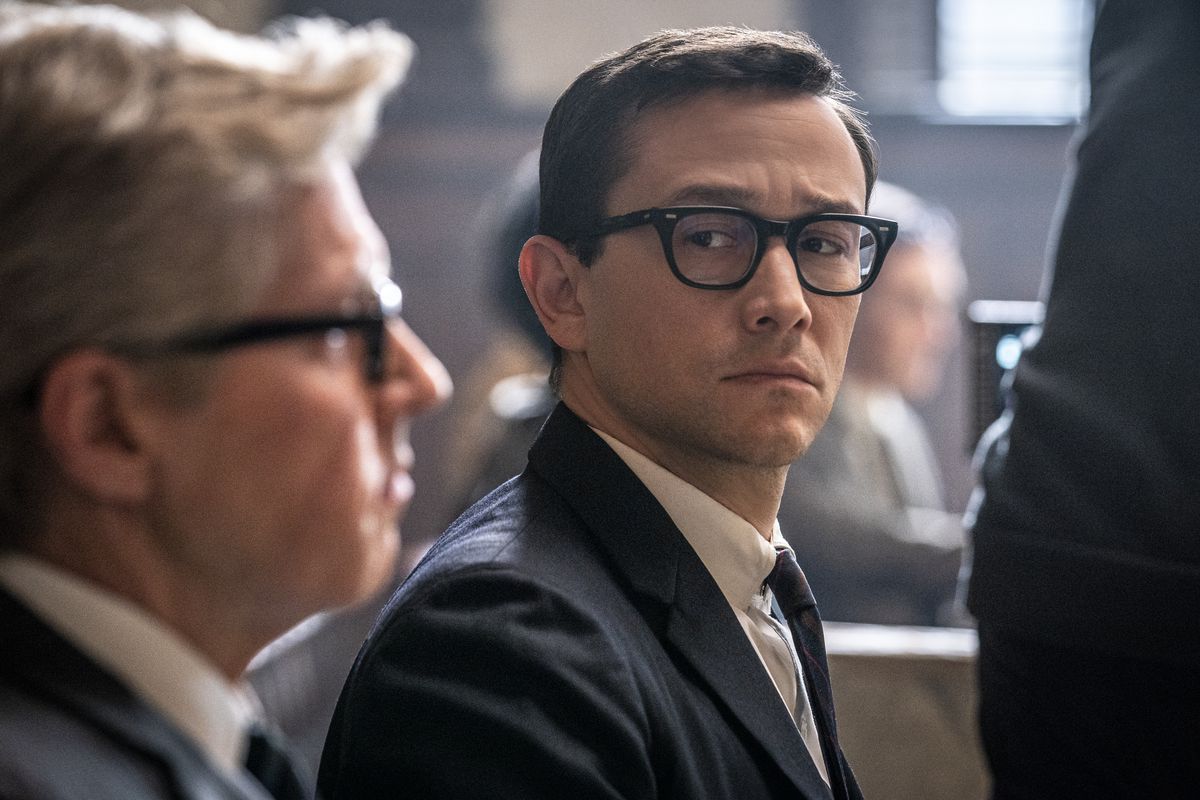 The rising bile you get when you see a person being wronged, or experience bigotry or racism or some other form of discrimination: that’s what you sit in the entire way through this movie. Vietnam was, for those of you too young to have lived through any of it, a conscription war, with the United States drafting thousands of young men to go off and fight in a conflict very few people back home fully understood, and even less wanted. Conscription breeds discontent among those who object to the war, and it breeds anger amongst the populace against their Government. It’s seen as a removal of a person’s sovereign, constitutionally protected rights. Off the back of this simmering resentment comes the Democratic National Convention, ostensibly for the Democrats to elect a new Presidential Nominee – seen as just another guy who would willingly send people off to war – and it forms the backdrop of the film despite almost zero political specificity. The Convention was merely the canvas of rage and anger the protestors used as a tool to further their message. Disrupt the convention, get more people reading and seeing their frustration. Sorkin develops his characters alongside the increasingly fragile state of the trial’s auspiciously biased trajectory – Frank Langella has to be commended for making Judge Julius Hoffman an absolute asshole with such quiet ease, he just doesn’t give a shit about the defendants fate and probably didn’t care if people figured that out – and his direction, accompanying the great performances all around, make for disconcerting and jaw-dropping viewing.

Like Robin Williams and Jim Carrey before him, Sacha Baron Cohen is another of those industry funnymen who has recently turned to serious roles to broaden their careers. When he’s not trying to catfish Rudy Guiliani in the how-did-nobody-figure-it-out Borat sequel, or wipe Elephant jism from his eyes in The Brothers Grimsby, he’s stretched himself dramatically with material such as Netflix’ mini-series The Spy as well as this film, and he pulls it off. Although his character is arguably a bit of a loose comedy cannon, Cohen plays him comparatively straight, laughing at himself when needed but zeroing in on the power and urgency of the political statements Abbie Hoffman was trying to make. It’s not all that far removed from the actor’s real life excoriation of Facebook and founder Mark Zuckerberg, as big a power-move as I’ve seen from Hollywood recently. Eddie Redmayne, an actor I typically find most annoying with all his tics and peculiarities, manages to acquit himself with an American accent in this most of the time, and he offers a strong portrayal to balance that of Cohen on the opposite-but-same side of the democratic spectrum. Joseph Gordon-Levitt plays as straight-bat as is possible as the near-unshakeable Richard Schultz, and I should also make mention of Jeremy Strong’s work as stoner activist Jerry Rubin, arguably the film’s most endearing character. Yahya Abdul-Mateen II delivers a solid performance as Bobby Seale, the embittered Black Panther co-founder and alleged accomplice to the other seven in conspiracy – a charge that was dropped after appeal – as does Mark Rylance as the group’s lawyer. Rylance’s character is about the only one that never feels like he sits well within the film, lacking either cogent motivation or sufficient momentum to work against the charges; Rylance plays Kunstler as an often insecure or unwilling participant at times, whereas the real Kunstler was a (controversial) renowned civil rights activist and defender, who secured a large number of successful wins during his career. 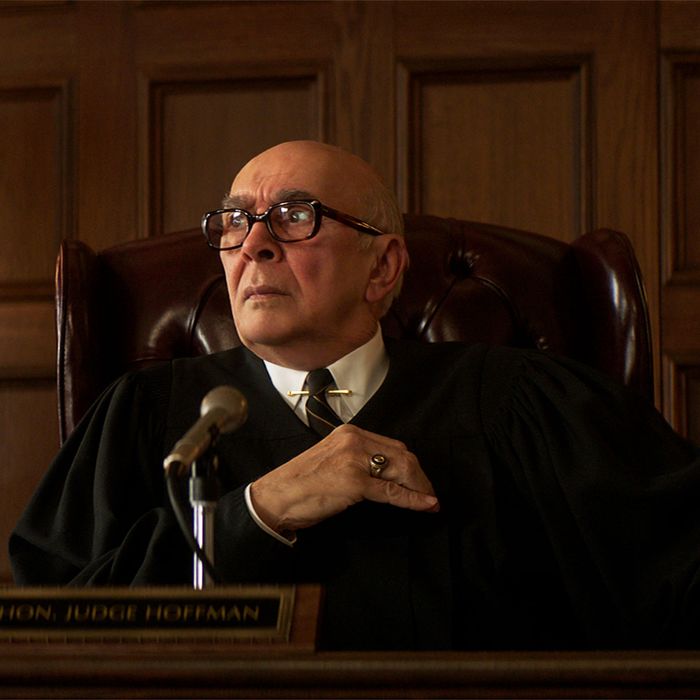 With a tremendous cast all exhibiting on-point portrayals of real-world participants, some superb production design and production value, and a remarkable story to tell, director Aaron Sorkin’s The Trial of The Chicago 7 is an inspiring, powerful examination of justice both then and now (honestly though, not much has changed in American law courts, it would seem, since the 1960’s) and a cleverly framed drama of young men taking a stand. You can watch it as a talky, lengthy courtroom drama or as a diatribe on corruption and/or oppression or a little of both, but it’s impossible to deny the film’s emotional impact and cathartic heft. Aaron Sorkin has delivered a quite remarkable movie indeed.