After the massive success of the Spielberg-produced spook-flick Poltergeist in 1982, director Tobe Hooper was offered a three-picture deal by B-studio Cannon Films, the first of which became the cult classic Lifeforce. Derived from the schlock appeal of Colin Wilson’s 1976 space horror novel “The Space Vampires”, Hooper’s Lifeforce featured a blend of gratuitous nudity in excess, gory horror elements and a nice little 80’s sci-fi aesthetic, although sadly it did not perform well at the box office at all, and fared even worst with critics of the day. In truth, Lifeforce is a pretty mediocre film, working as a sci-fi vampire horror piece evoking the best of Hammer Films and the absolute worst of B-movie performances. Despite the film’s rancid screenplay, Hooper directs the hell out of this thing, flinging all his talent at both bewitching and horrifying the audience in equal measure. Enabled by the lengthy (and I mean lengthy) periods in which French model-turned-actress Mathilda May spends completely full-frontal nude for the majority of her appearance in the movie, Hooper swings for the fences with this visual effects-laden masterwork of gore, violence and apocalyptic destruction.

On a mission to explore the rapidly approaching Halley’s Comet, the crew of the space shuttle Churchill encounter a mysterious vessel hidden away in the comet’s tail. Upon exploring the vessel, they discover three bodies in stasis, one of which, a woman, who appears to still be alive. When communication with the Churchill is lost, NASA sends a rescue craft who find the crew all dead, turned into desiccated husks, whilst the commanding officer, Colonel Tom Carlsen (Steve Railsback – The Devil’s Rejects) is missing, having launched in the shuttle’s escape pod. The three humanoid bodies are returned to Earth, where the female (Mathilda May – The Jackal) suddenly springs to life, draining the lifeforce from the scientists and military personnel she encounters, lured in by her physical beauty. As she wreaks havoc across London, and out into the British countryside, she is pursued by SAS Colonel Colin Caine (Peter Firth – Equus, Pearl Harbor, Amistad), who deduces that the trio of bodies are actually vampiric in nature, stealing the life essence of humans in order to further their own lives. Realising he has been duped into following the woman, Caine is horrified to learn that the two other bodies, males of the same species, have also awoken and are spreading their space-vampiric evil through London unchecked.

Nudity, exploding dusty corpses and spooky cosmic magic: what’s not to love? Lifeforce aims for the basest human emotions with gratuity, and succeeds enormously. This, despite being quite an awful story and pretty basic, implausible acting amid terrible characters, makes Lifeforce something of a success. The script is arguably the most derivative thing you’ll hear spoken aloud by the mouths of human beings, with wooden technobabble, cheap exposition and laughable plot points hindering the wonderful horror camerawork, editing and production design. Written by Alien alum Dan O’Bannon together with Don Jakoby, I was honestly surprised the dialogue turned out to be so excruciatingly dire given the former’s involvement. The words felt cumbersome, lacking a grace and fluidity the writer’s work on Alien maintained, although it’s hard to really deliver nuance and subtlety when the chief villains in your film are three magical space vampires intent on plundering our world for their gain. It’s a surprisingly sprightly screenplay too, stepping between set-pieces with the briefest of interludes before the next terrifying horror moment begins, which makes Lifeforce feel far more pulpy. 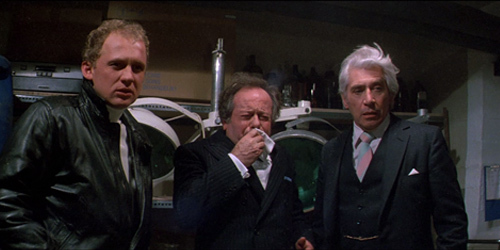 The characters are all-round terribly written, and to be honest they’re also quite terribly performed. Standout roles by Peter Firth and Patrick Stewart highlight a miasma of men standing about looking shocked, afraid, angry and terrified, as the befuddled humans try to outwit the far superior alien vampires (and fail entirely), stock performances the order of the day from this undemanding story. Steve Railsback is given little to do other than scream at the camera, sweat a lot, and fantasise about sex with Mathilda May’s stunning vampire vixen, his tormented space captain character hardly a stretch even had they cast a plank of wood. Seeing Frank Finlay, who was once nominated for an Oscar for his work in Othello (1965), slumming it in this feels vicariously like watching a purebred French Poodle fuck a crossbreed pound puppy, but he seems to be having a knowing good time and acquits himself reasonably well, all things considered.

Patrick Stewart make the most of his brief screentime with a memorable physical performance as Dr Armstrong, a victim of the vampires who leads Carlsen and Caine to the knowledge of the terror that has been unleashed on the world. Of course, the star of Lifeforce is undoubtedly Mathida May, who spends the entire film completely nude, and not in that kitschy “shot from behind, no bush or bits on show” way either: I mean, you get to see alllllll of her, a lot, which can become quite confronting if you’re not expecting it. I mean, tawdry titillation is one thing, but this film has Showgirls-levels of nudity from May that cannot be overstated. I’m only surprised the film was a financial bomb – the near constant nakedness of its star should have meant a rabid audience flocking to buy tickets in droves. It’s not porn, because in context it makes sense, but hell if it isn’t a hard sell watching this with mixed company.

The film’s photochemical visual effects are quite dated by today’s standards – scenes in space lack sharpness or a sense of operatic scale like Star Wars, a mess of translucent rotoscope work and heavily cheapened model work ruining a lot of the film’s potentially atmospheric opening act. The sequences where the space vampires steal a human’s lifeforce, however, and the heavy use of puppetry to produce convincing desiccated (and reanimated) corpses, are superbly realised given the film was made in the early 1980’s, and several of the best moments are derived from seeing these things in action. At times the corpses, reanimated thanks to space vampire magic, explode into dust producing quite a shocking visual beat between the howling screams of victims and the urgent masculinity of Peter Firth’s strong-willed SAS Colonel. Henry Mancini’s score is something else entirely, arguably the best aspect of the whole show, whilst veteran horror film DP Alan Hume’s cinematography is resplendently mired in grain and a mixing of both film stocks and camera lenses. Fisheye lenses are a vastly underutilised technique in today’s modern horror films, and there’s more than one or two directors who could benefit from aping his work on Lifeforce.

While the majority of the film’s marketing leant heavily into the sensuality of May’s omnipresent nudity, and evoked echoes of Kubrick’s 2001: A Space Odyssey, Lifeforce couldn’t be further from that style and feel if it tried. It’s a lewd, tawdry, grimy B-movie, a willing exploitation film in most respects, but one that still manages to shock and compel even today. To be honest, I had such a great time with the sheer 80’s nostalgia on display I forgave the film quite a lot of its problematic moments. There are a number of decent 80’s jump-scares, a grab bag of wonderful practical visual effects moments (and a lot of pretty terrible ones too, sadly), and the constant delectability of Mathilda May in full view as often as possible; Lifeforce is decadently depraved and garish, often insulting to one’s intelligence and even more often assaultive in how it treats its characters, but I’ll be damned if I didn’t enjoy nearly every second of it.