I can’t for the life of me tell which is the worse film: Michael Bay’s cloyingly stupid Pearl Harbor, or Roland Emmerich’s nonsensical 2019 war opus Midway. Both offer widescreen destruction, faux-patriotism in the face of inexplicably uneven odds, splendid visual effects and a string of square-jawed, cringeworthy dialogue and performances far far beneath the value of the talent giving them. Both films remain staunchly fervent in their depiction of American firepower and resolve, and both go a long way to try and portray the attacking Japanese as a nation unwilling to engage the enemy but backed into a corner to the point they have no other option. But while Pearl Harbor is mired in one of the worst three-way romantic love stories in modern cinema, Midway eschews romance in favour of Emmerich’s patented big-screen bluster, a machismo-led affair as a shallow as it is percussive. Although one might think Midway’s focus on the actions involving the American military’s sudden entry into World War II would be a more enjoyable affair without the billowing nostalgia of romance, that line of thinking is folly when it comes to this tone-deaf dusk hued action rollercoaster. 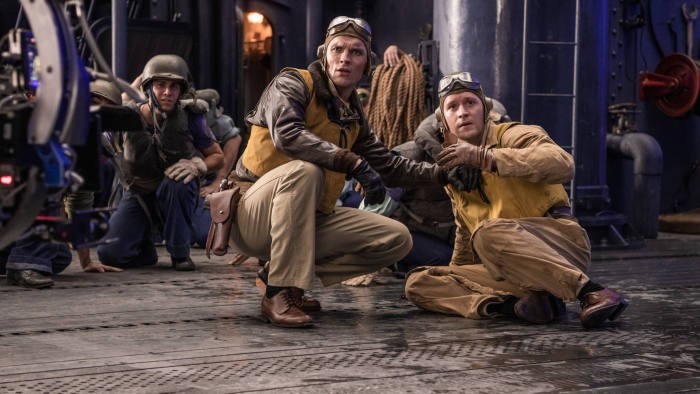 Midway traverses a potted history of American neutrality in the world’s second global conflict, through to Japan’s attack on the naval base at Pearl Harbor, the country’s eventual retaliation through the Doolittle raids, before focusing on the Battle Of Midway and America’s success in that theatre of the war. Throughout, we follow Lieutenant Richard “Dick” Best (Ed Skrein), a gung-ho fighter pilot intent on exacting revenge on the Japanese following Pearl Harbor’s bombing, intelligence officer Edwin T Layton (Patrick Wilson) as he gathers intel for the American counterattacks, and the more rigid Wing Commander Wade McClusky (Luke Evans); the film gives us a significant Japanese perspective through Rear Admiral Tamon Yamaguchi (Tadanobu Asano), the commander of Japan’s fleet Admiral Isoroku Yamamoto (Elsushi Toyokawa) and the various significant players within the combatant side, as they try to navigate the futility of war and the rising human cost of the battles they fight. 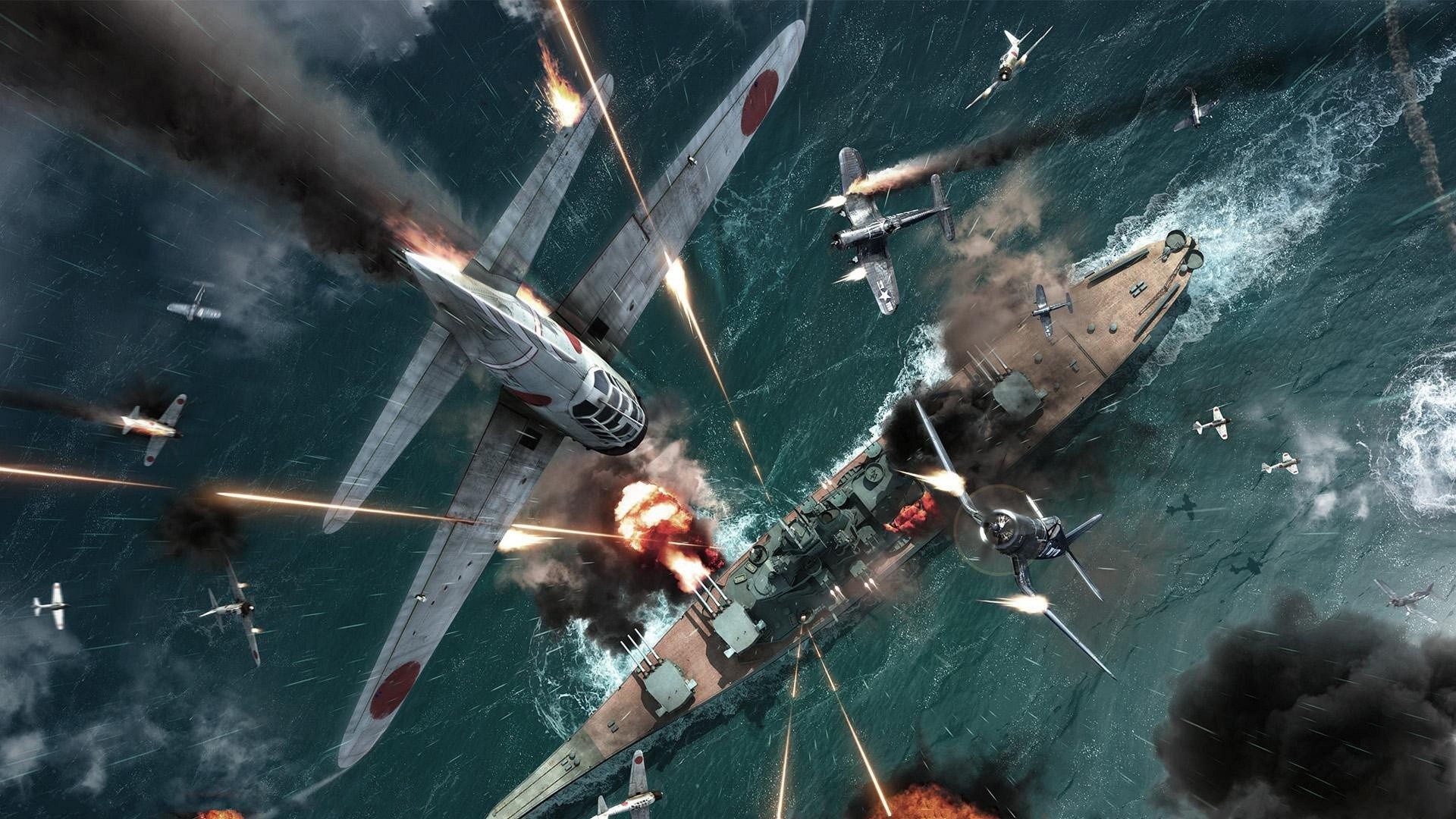 There’s a certain expectation when going into a Roland Emmerich film. It’s almost always going to be an effects-heavy film. There’s going to be cheesy, on-the-nose dialogue. There’s invariably a lack of character depth, and/or simplistic, join-the-dots development with one-dimensional participants. And a rousing, chest-thumping American climax. Anonymous aside, Emmerich’s films are never subtle, and I’m disappointed (or pleased, depending on your view) to say that Midway doesn’t deviate from this formula. The film boasts a pleasing all-star cast, including deliciously growling performances from Woody Harrelson and Dennis Quaid, and has some almighty spectacle to deliver throughout, but it wastes them all with trite, insipid dialogue, formulaic plot points delivered with metronomic precision, and a complete disregard for intelligent thought and subtle storytelling when it can simply change gears to deliver action sequence after action sequence. Even at a bladder-testing two-and-a-bit hours, Midway feels rushed, cramming the attack on Pearl Harbor, the Doolittle raids on Tokyo, and the lengthy Midway battle into a single film: of course things are going to feel condensed, but its frustrating when the film feels like it’s unable to let the audience breathe. 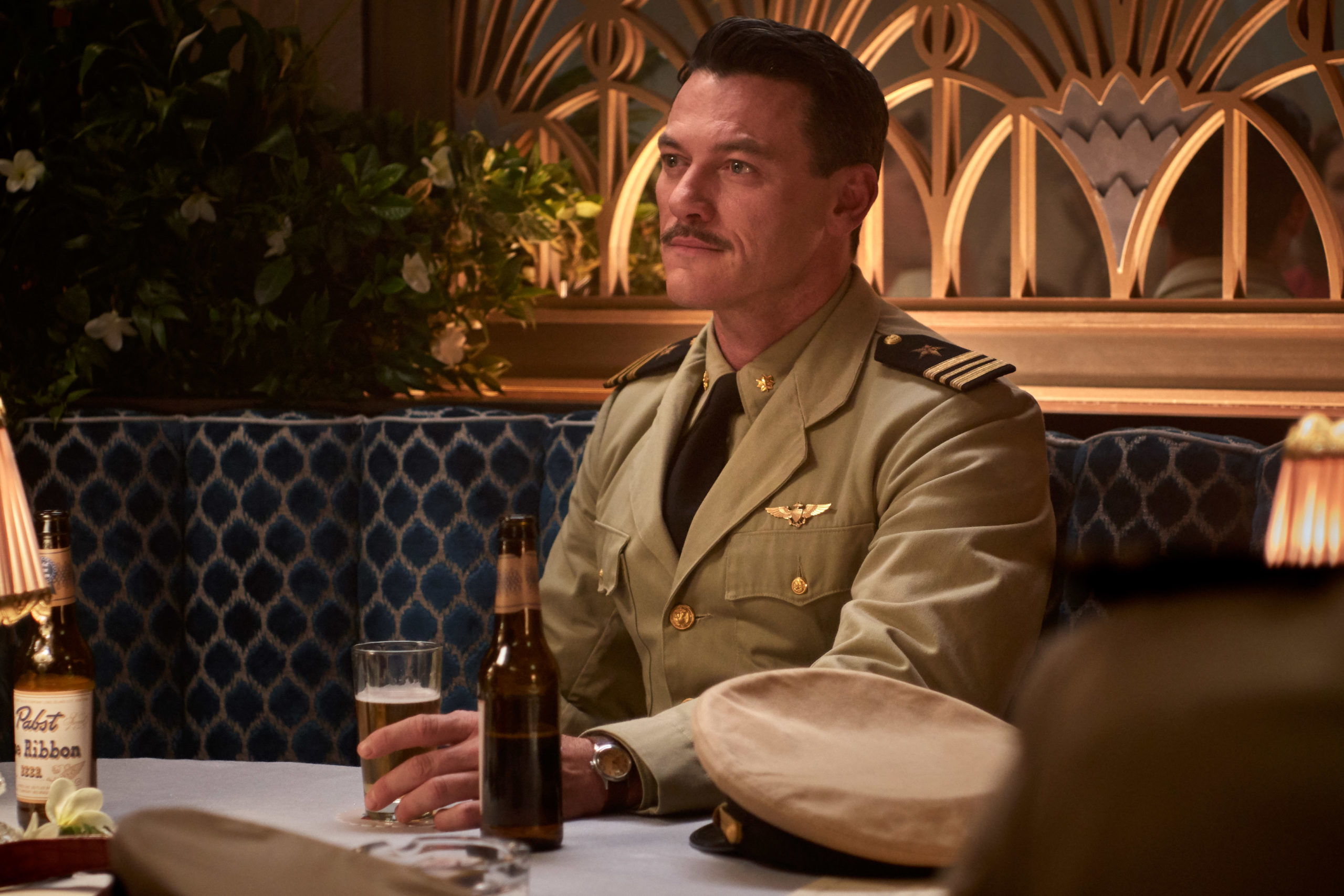 The script comes to us from Wes Tooke, who is given the unfortunate task of weaving an interesting character like Dick Best (all the characters in Midway are based on real people, or combinations of several) into a spectacle-driven adventure film; this is like a big-budget pulp novel without an honest bone in its body, trying to ride the historical coattails without generating the authenticity to do so. It’s a hodge-podge of “let’s depict real heroes” within a framework of making it as action-centric as possible, told without a shred of tact, a skim-readers version of historical artifice engorged with digital effects and despairing of all resonance to modern audiences. The dialogue ranges from borderline silly to absolutely asinine, exposition and plot development tossed off in middle-distance staring and flag-waving utterances, which forces the film to lurch from sequence to sequence without the audience being invested in the characters. 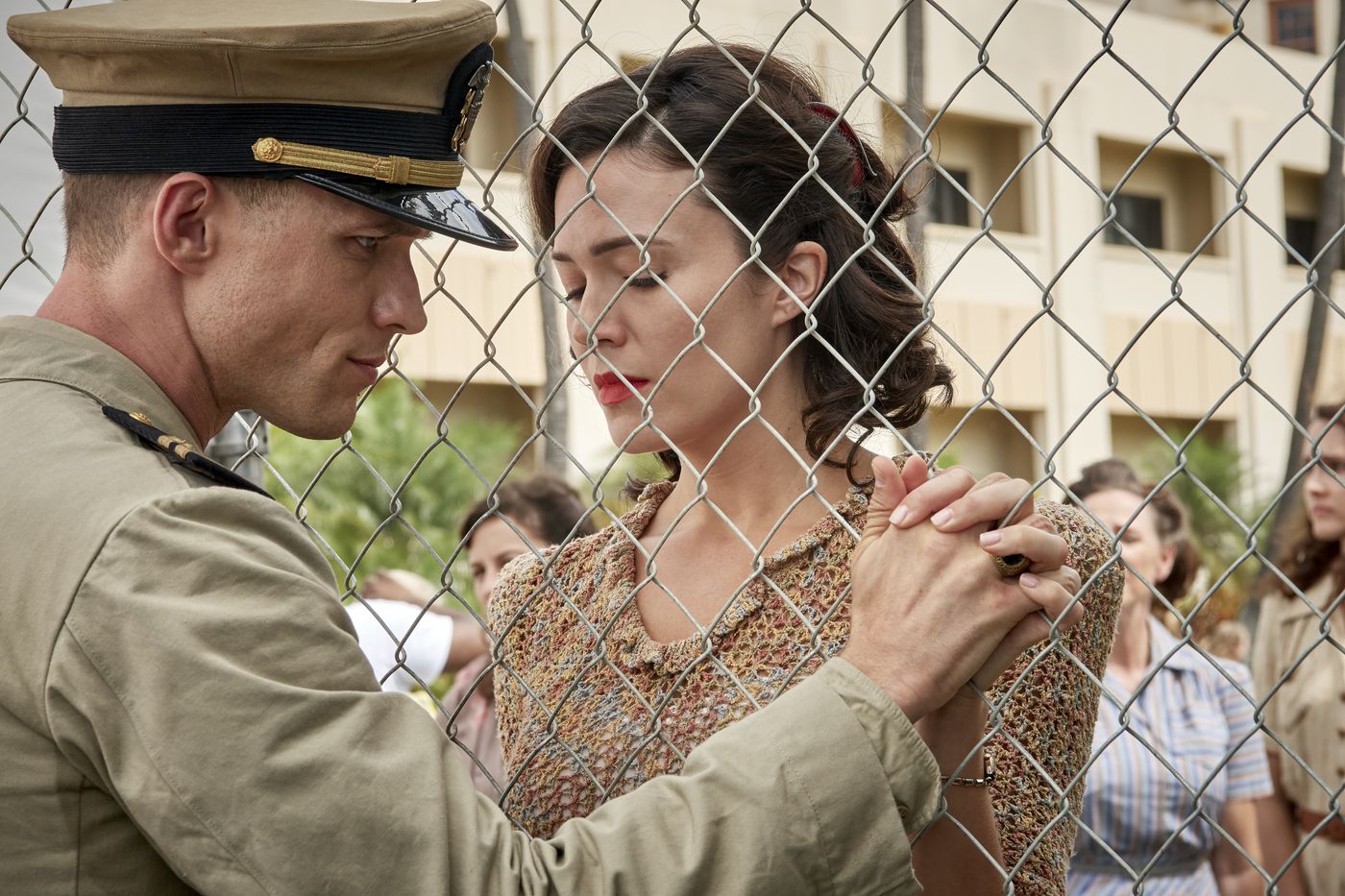 Ed Skrein isn’t a great actor, and he’s given less to work with here than he had even in that Transporter film he did which is saying something; his character lacks any kind of depth beyond being an angry-faced pilot, whilst poor Luke Evans, as his on-screen sparring partner, is fares even worse. To be honest, the leads in this film are poorly serviced indeed, and the film hinges a lot on the work of its supporting roster (Quaid and Harrelson particularly), although I will give Emmerich some credit for giving the Japanese side of the war a fair amount of screen time. They aren’t some faceless enemy to be killed, they’re humans doing shitty things just like the Americans. Seeing the likes of Mandy Moore, Jake Weber (who should be familiar with US Maritime shenanigans given his inclusion in U571) and Aaron Eckhart (as James Doolittle) pop in from time to time is also pleasing, but again they aren’t asked to do much within the emotional context of the film, and what they are given isn’t afforded enough latitude to develop. 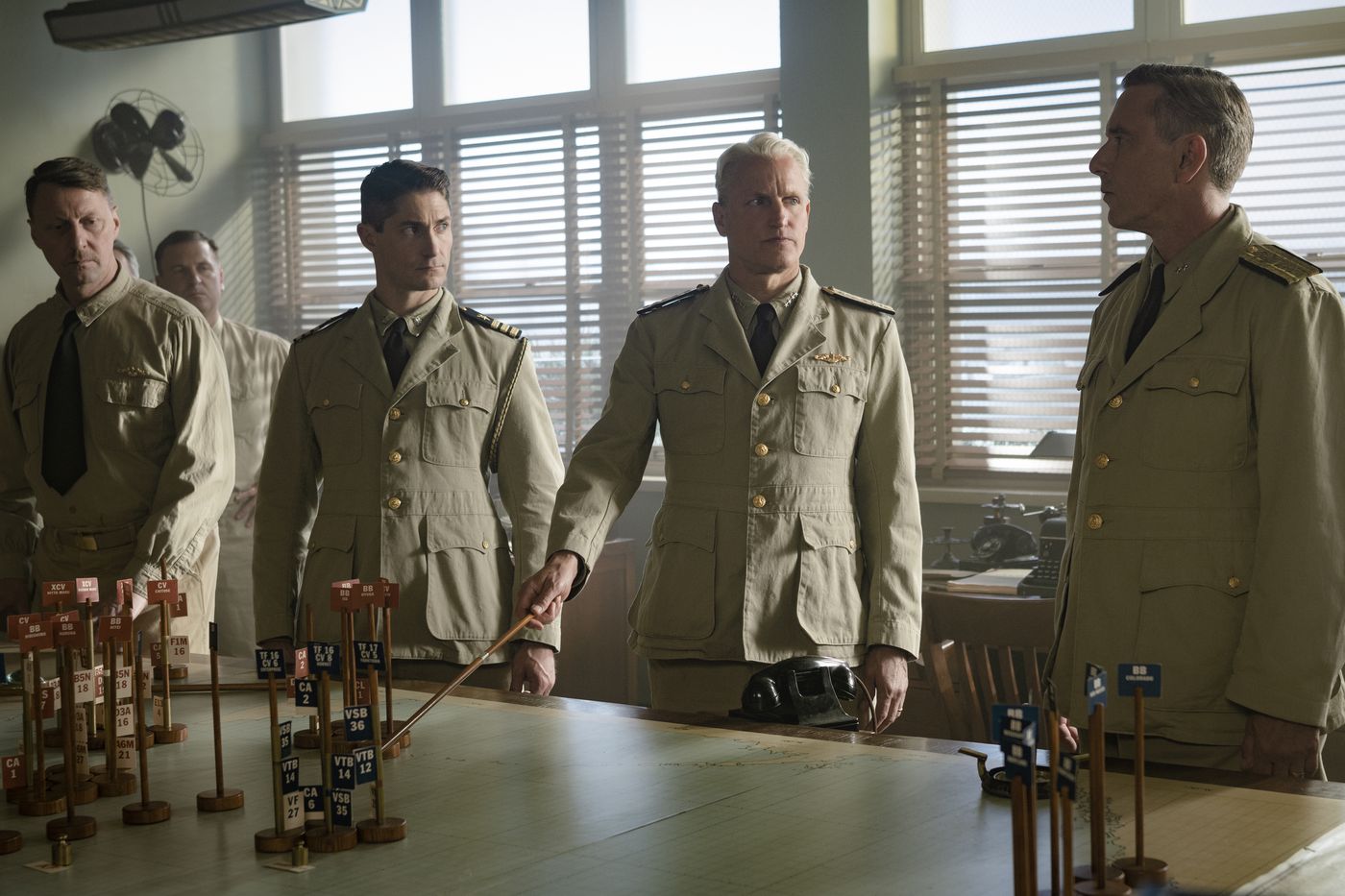 From a production standpoint, Midway is afforded a decent budget to achieve so much and actually does really well. The attack on Pearl Harbor is brisk and brutal (the film is rated PG, so there’s no real gruesome violence unless absolutely necessary), the Doolittle Raid handled with similar speed and whoop-whoop go-get-’em rousing Americana you’d almost forgive Emmerich aping some of Bay’s work in his own film about these events. It’s when Midway gets to… well, Midway, that the film strikes off on its own, for the better it must be said. There’s plane dogfights, bombing runs, submarine thrills, aircraft carriers handling like Dominic Toretto drives his Dodge Charger, and all manner of explosions and “epic” moments that make trailerworthy footage. If you’re searching for a war film that’s entirely superficial and spectacular, Midway is definitely the film for you; unlike some of 2019’s other war films *cough1917cough* this is a pure popcorn adventure movie without the smarts to invest us emotionally. Perhaps it’s the fact that a film with such a large ensemble isn’t able to afford the luxury of emotional investment through sheer scope of story, but the noxious vapidity of Midway’s triumphant Americanisms dilute an already thin roster of characters and place them directly into the vortex of the worst of generic Hollywood VFX escapism. 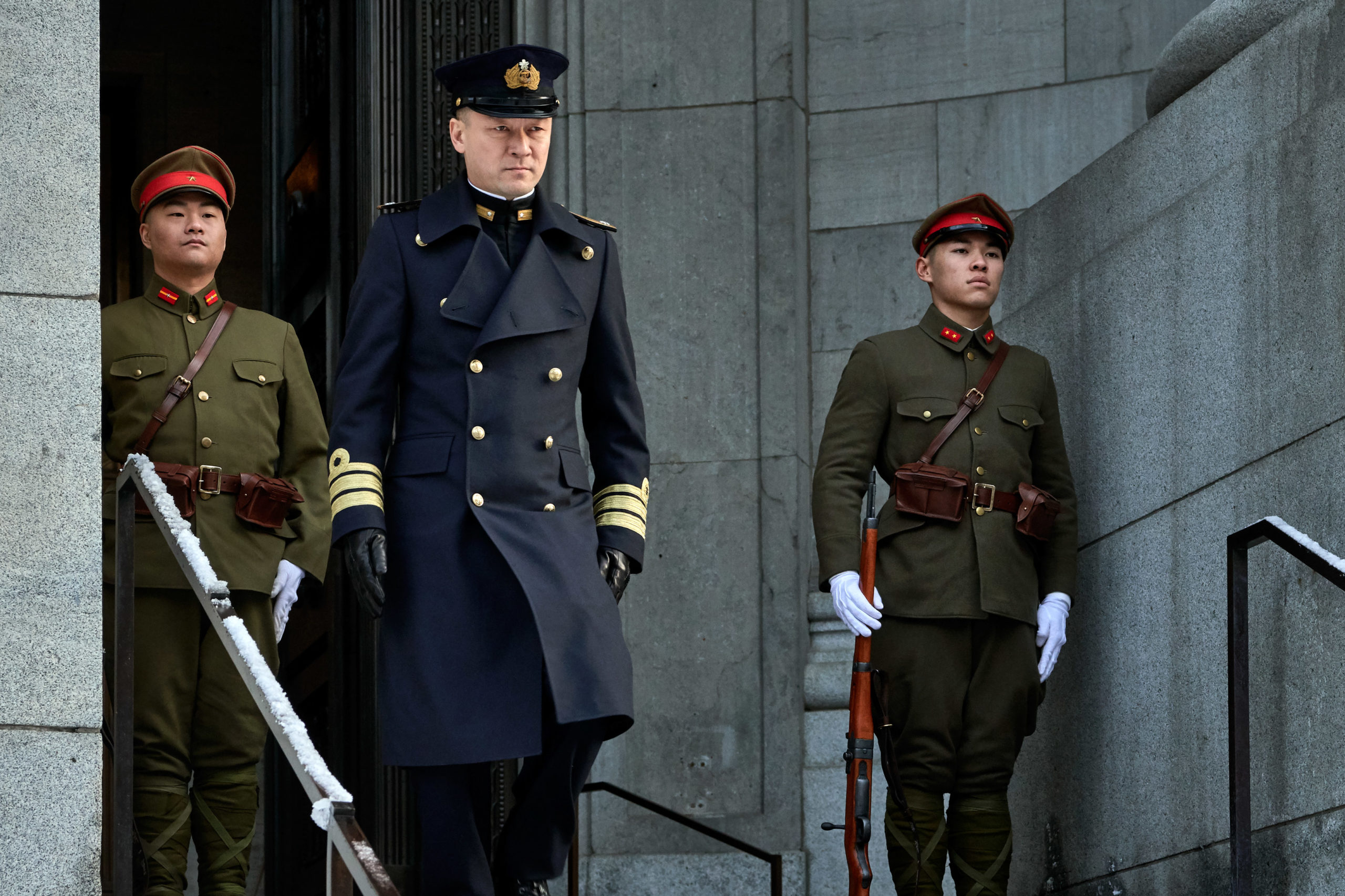 Midway is remarkably dull escapist wartime cinema. I think as audiences we’ve grown accustomed to seeing the true horror of war on-screen, so to suddenly sit down and “enjoy” a film about these real-world event seems counter-intuitive to our politically correct cultural norm. I’m not averse to seeing a spectacular war film such as the one Midway aspires to be, but my demands from the filmmaker are far tougher than a popcorn director like Emmerich is able to deliver. War films tend to work best when they go small – focus on one (or few) characters in an epic wartime landscape, not a bulging ensemble of Hollywood names trying to differentiate themselves with diminishing returns. Perhaps had Emmerich reduced the size of his focus Midway might have worked as a “one man’s journey through war” rather than the scattered, jarring nonsense it becomes. The film never earns the solemnified end title cards telling us about the real lives of the people depicted within; a sad juxtaposition of realism alongside adrenalised showmanship at odds with itself over exactly what it’s trying to accomplish.