A staple of American culture since their comic strip debut in 1938 (around the same time as Superman), Charles Addams’ eponymous self-titled family have remained an enduring Gothic comedy through innumerable television series, cartoons and feature films, the latest of which transports the creepy, kooky, altogether spooky clan into the world of computer animated cinema; 2019’s The Addams Family retools the franchise for a modern digital age, showcasing the creative ingenuity filmmakers better known for Seth Rogen’s positively filthy Sausage Party can bring to children’s entertainment. Led by a supreme cast of vocal talent, with the backing of Disney’s animation arm, the prestige debut of the family’s CG animated outing comes at considerable cost: making a well worn trope feel fresh and new again. 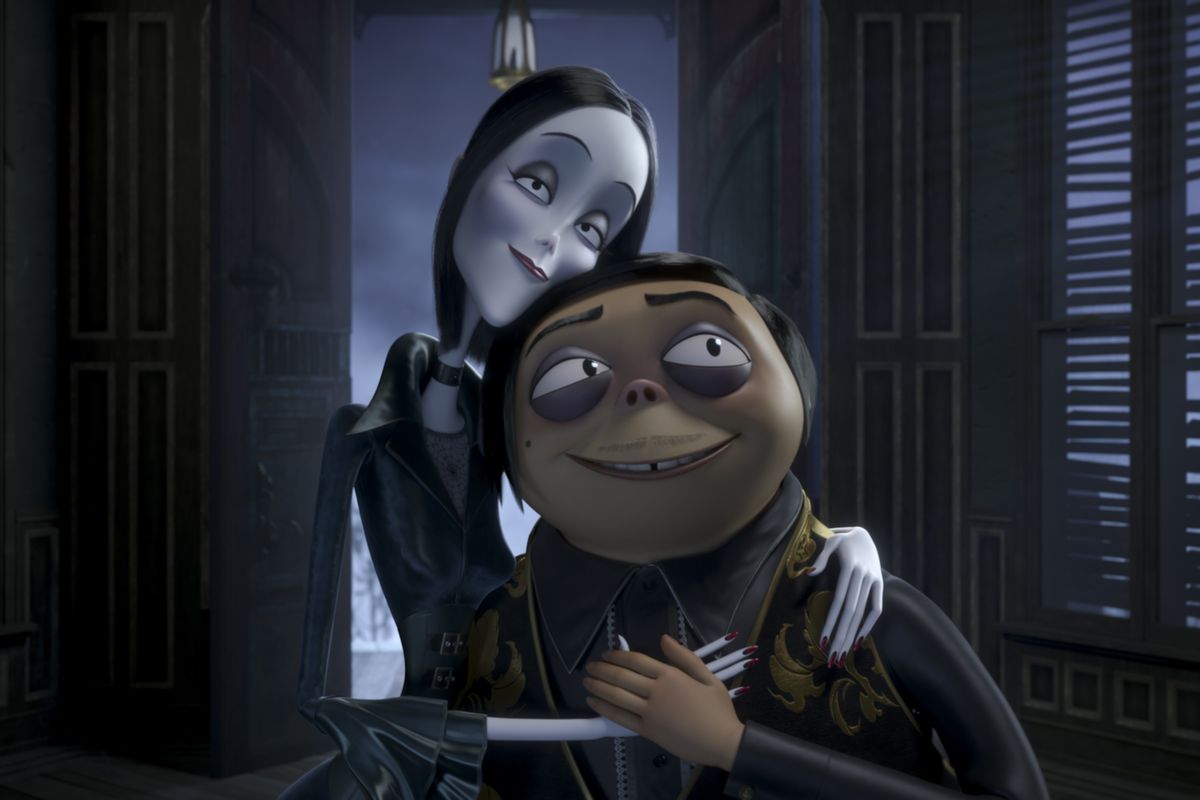 Gomez and Morticia Addams (Oscar Isaac and Charlize Theron respectively) are hounded out of their home by an angry mob, all the way to New Jersey, where they promptly set up residence in an abandoned lunatic ansylim conveniently hidden away at the top of a mountain. There, they raise a family; dour daughter Wednesday (Chloe Grace Moretz) and precociously violent son Pugsley (Finn Wolfhard) are brought up in the family’s macabre ways, alongside their long-suffering butler Lurch (Conrad Vernon) and Thing, a sentient hand who operates many of the house’s creepy and elaborate fittings. When a nearby housing estate is about to be opened, by vexatious reality TV host named Margaux Needler (Allison Janney), and the entire Addams clan arrives for Pugsley’s “coming of age” ceremony, it would appear both worlds are set to collide and ruin the relative peace in which the family reside. 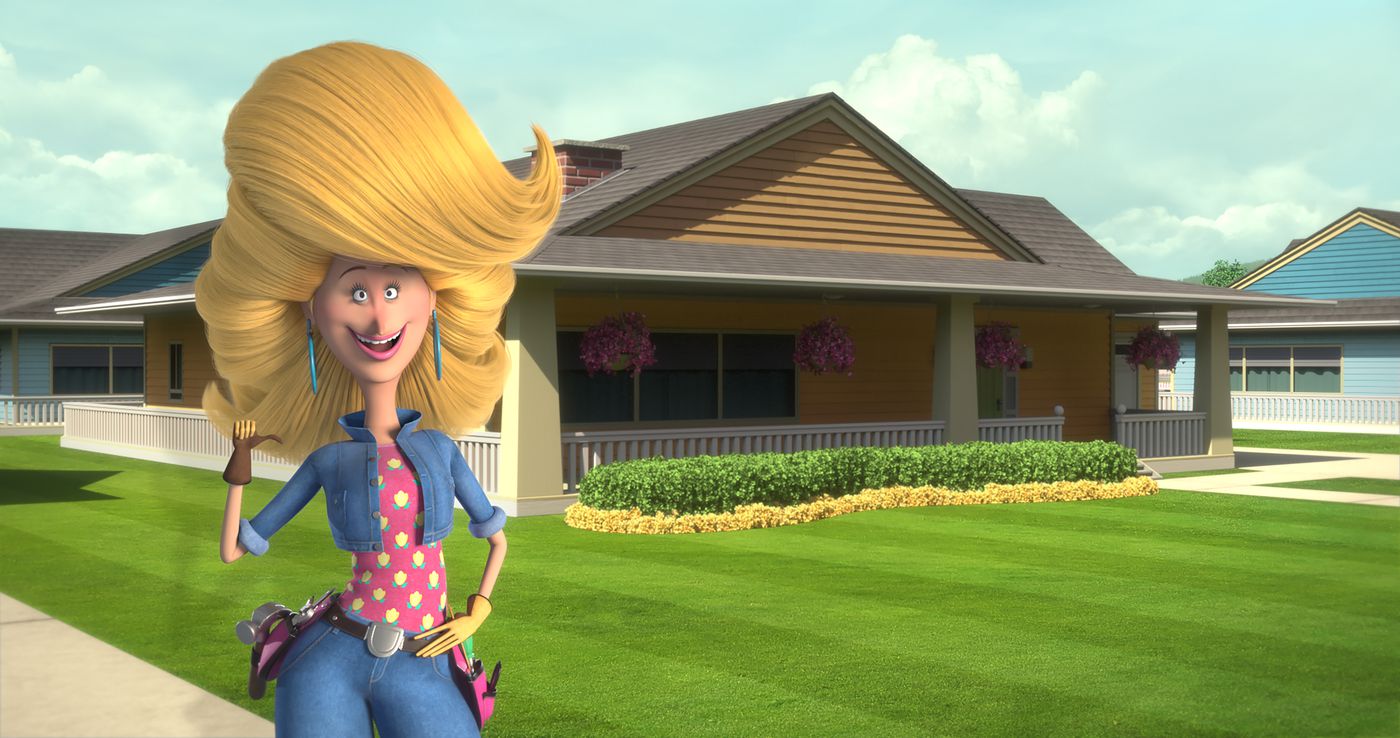 Anyone who’s seen any iteration of The Addams Family will automatically compare it to another monster-themed sitcom of the 1960’s, The Munsters, which is fair considering both television shows ran concurrently during that era and featured similar themes within them. Both franchises (which have gone on to success in the cinematic field, it should be noted) feature a tight-nit family unit of monstrous or bizarre creatures, typically of the kind seen in monster movies and Halloween displays, finding their way in a modern world who views them as outcasts and “freaks”. Notably, in more recent times, The Addams Family has persisted with this theme in its live-action films, particularly the first two starring Raul Julia, Angelica Huston and a young Christina Ricci, retaining that kooky charm amidst the clever supernaturally charged antics and wanton cartoon violence the family seems to enjoy. At its heart, the Addams franchise has been about family above all else, and despite being outwardly bizarre Gomez, Morticia and their clan of hunchbacked, zombified bizarro ensemble all pivot on this key, core tenet. 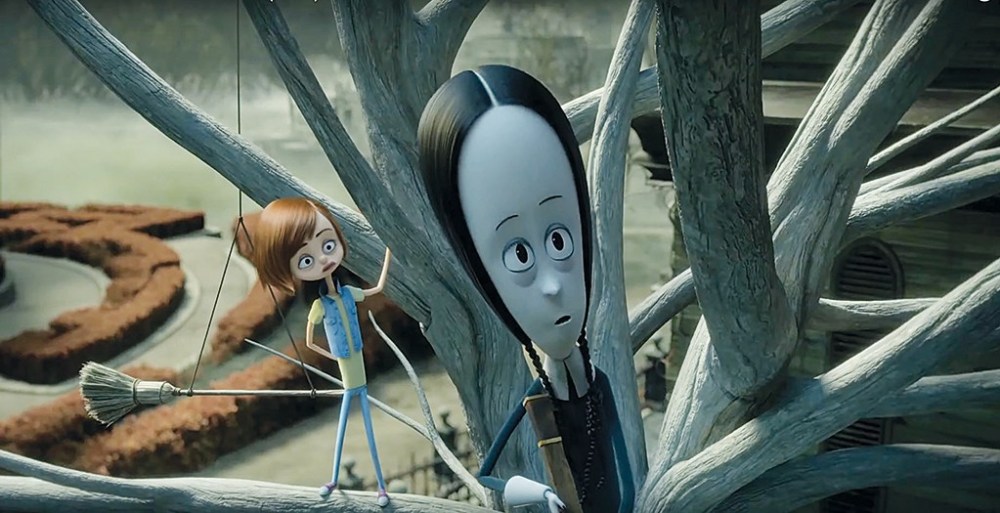 This new film takes this idea to heart, although to the detriment of the final product reduces the distillation of American ideals and supplants it with an indefinable vaudeville tone that works less frequently the longer things run. The screenplay, by Matt Liebermann and Pamela Pettler, is a homage to Addams’ riffs and iconography, pays particular attention to callbacks from established lore and perhaps the most identifiable theme from the sitcom – that snappy, catchy theme tune – and sets up a fairly placid antagonist to deal with, more’s the pity. The film starts with a stuttering, stammering unsure-of-itself pace, as if working out just how far to push some of the off-the-wall gags (and they’re plentiful, bless them) before it sets up the story proper; Wednesday, the young emo daughter trudges off to human school ostensibly to learn some new experiences, while Pugsley is tasked with learning an insanely complicated ritual to Become A Man (a little like a bat mitzvah, I think) to the concerns of Gomez. The central villain comes in the form of an external threat, this time with an uppity TV show host hoping to sell all the plots on her expensive real estate gamble lusting to destroy the Addams’ eyesore mansion; this becomes the film’s weakest plot point, sadly, although not for lack of trying on the part of voice talent Allison Janney. By building on local townsfolks’ prejudice towards the admittedly freaky family (who see themselves as normal) there’s a cringe inherent considering the prevailing social antagonism going around these days, and the film’s script isn’t clever enough to be clever enough to really sell this point. 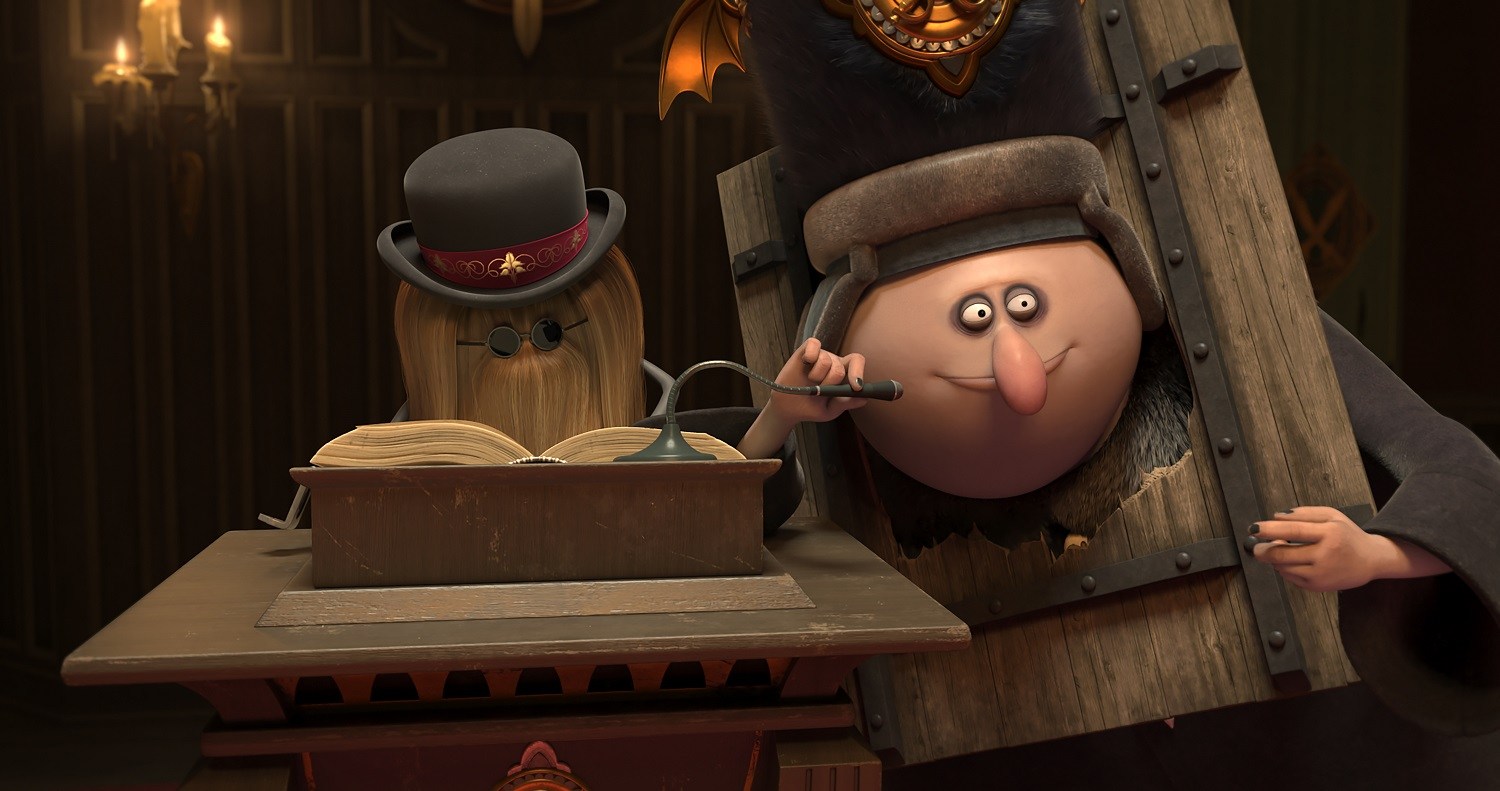 Where the film shines is in the family dynamic these well-worn character exhibit. Oscar Isaac’s Gomez and Charlize Theron’s Morticia are gloriously parental, the lumbering Lurch is a continuous one-joke wonder, whilst Nick Kroll’s take on Uncle Fester, and Bette Midler’s Grandmama Addams pad out the extended ensemble with ease. It’s here the film jerks to life after a stumbling start: once we see these marvellous characters interacting with each other the film clicks into gear. Momentum is a magnificent thing, and the film’s latter half is particularly enjoyable even if it feels a touch too studio=formulaic for my liking. The film feels too safe, too sanitised, too set-up to sell toys, for my liking. Nowhere in the brief will Disney ever step outside its family-friendly mandate, but even by their recent standards the film doesn’t really raise the pulse or quicken the intellect, and I think one of the big takeaways from this film venture is just how a big a missed opportunity it all is. Especially in light of the continued success of the Hotel Transylvania franchise, which trades on very similar visual gags. There’s a lack of balance between nostalgia for us older viewers who may be aware of the history of these characters, and the young viewers targeted by the studio’s decision to go the animated route, most of whom wouldn’t even be old enough to remember the live-action films let alone the original black-and-white television series. 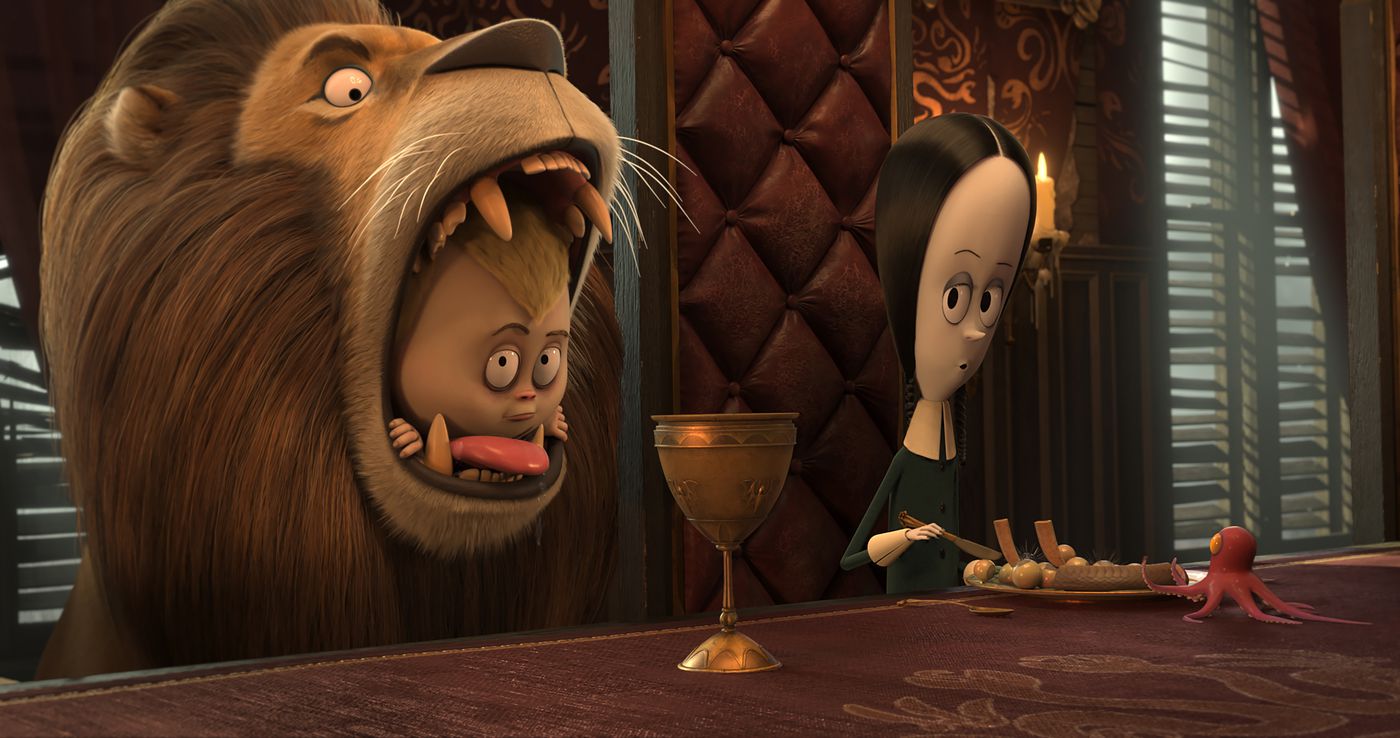 Ultimately, and unfortunately, The Addams Family’s lauded return to the big-screen is a middling, uneven, all-too-safe affair that – if you’ll pardon the obvious pun – lurches from a weird cold-open start and first fifteen minutes into finding it’s groove about half way through. Nostalgic beats hit home here and there, and the creative team behind this dive deep into the trick box to update the franchise’s tropes as best they can, but with an inadequate villain (there’s a “peeping tom” theme involved here that’s going to be really hard to explain to the littlies, if you please) and uneven pacing and tone turn this well-designed reboot into a creepy, bizarre misfire. The transition from 60’s sitcom kitsch to post-millennial cool isn’t an easy thing to accomplish (the 1999 Lost In Space proves it’s bloody hard to do it well, even with all the money) and it’s a tragedy that this film, whilst enjoyable here and there, ultimately proves me correct. The Addams Family sits comfortably in the middle-tier of animation, fitfully enjoyable but underwhelming for those unfamiliar with its charms.