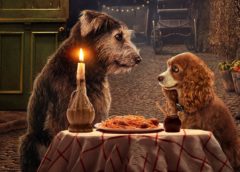 Our first glimpse of the new Disney+ streaming platform saw the debut of… well, a Direct-to-Streaming remake of their animated classic, Lady & The Tramp, now in digital live action with several surprising changes. Boasting a stellar cast of voice talent, the heartwarming cute-as-a-button star power of an unlikely melange of furry pets, and some really, really iffy CG animation sprinkled about, Lady & The Tramp is a teeth-clenchingly told, stoically Disney-esque feature that will enthral (or terrify) youngsters and marginally maintain interest for adults with its bucolic style and lack of interest in the now-classic story. 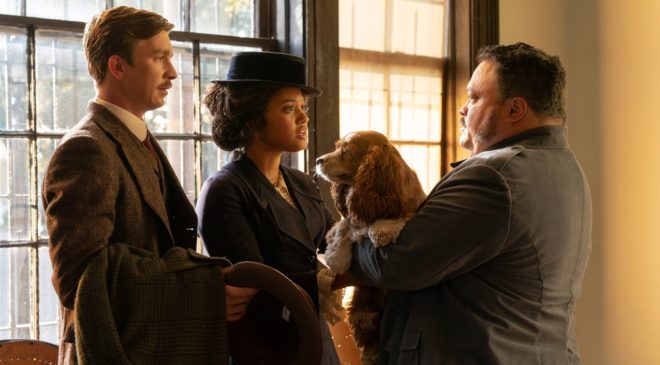 Set in a romanticised Antebellum South, during what I imagine to be the early 20th Century, a mixed-race couple Jim Dear (Thomas Mann) and Darling (Kiersey Clemons) live in a beautiful house with their Cocker Spaniel, Lady (voice of Tessa Thompson). Lady’s neighbours, the elderly bloodhound Trusty (Sam Elliot) and costumed Scottish Terrier Jock (short for Jock-queline and voiced by Ashley Jensen, changing the character from a male to a female for no discernible reason other than sexual equality) provide a lot of input into their sheltered life away from the “street”, where stray dogs, including a schnauzer named Tramp (Justin Theroux) are constantly on the run from the persistent town dog catcher (Adrian Martinez). So when Darling’s Aunt Sarah (Yvette Nicole Brown) arrives to babysit Lady whilst Jim Dear and Darling bond with their new baby – Lulu – the young spaniel suddenly finds herself cast out of her luxurious home and into the dirty, scary world of men and the omnipresent threat of losing her family forever. 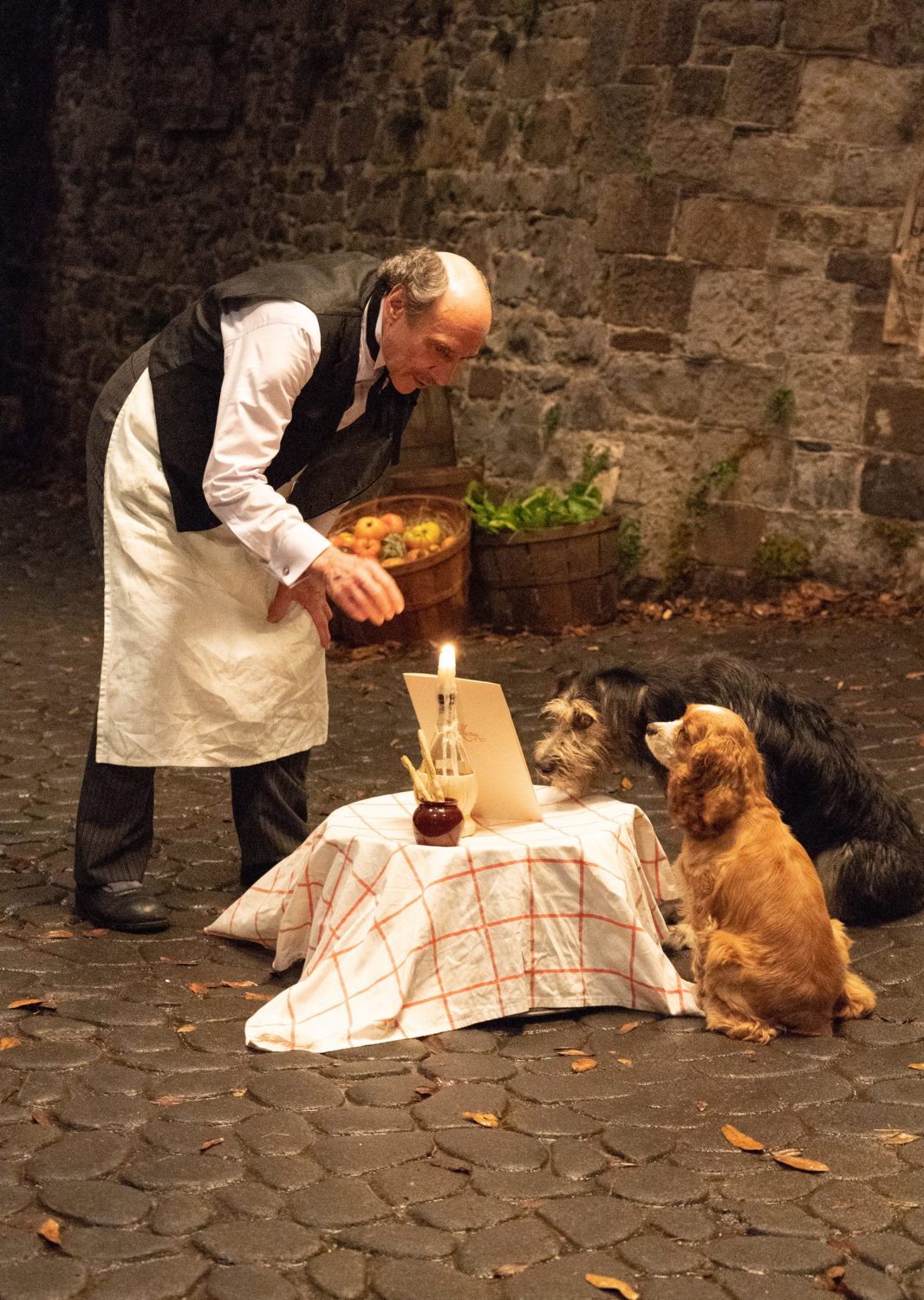 The original fully animated version of Lady & The Tramp came along in 1955, was presented in ultra-wide Cinemascope, and has become a beloved classic (despite being panned upon initial release). Its most prominent marketing moment, in which Lady and the Tramp enjoy a bowl of spaghetti which ultimately leads to an unintended kiss, embodies the Disney symbolism so prevalent in the studio’s core family-friendly mantra. In keeping with Disney’s plundering of their most loved films, the studio has decided to give it the live-action treatment, although continuing the bludgeoning of legacy by keeping a large portion of the animal action rendered in CG, something that works both for and against this movie. Lady & The Tramp’s 2019 edition is by-and-large a seamless retread of the earlier story, although some minor alterations have been cast upon both story and style forged by an updated politically correct media landscape so desperately afraid of offending anybody, things are apparently becoming bland as unsalted butter. Things such as this film, for example. 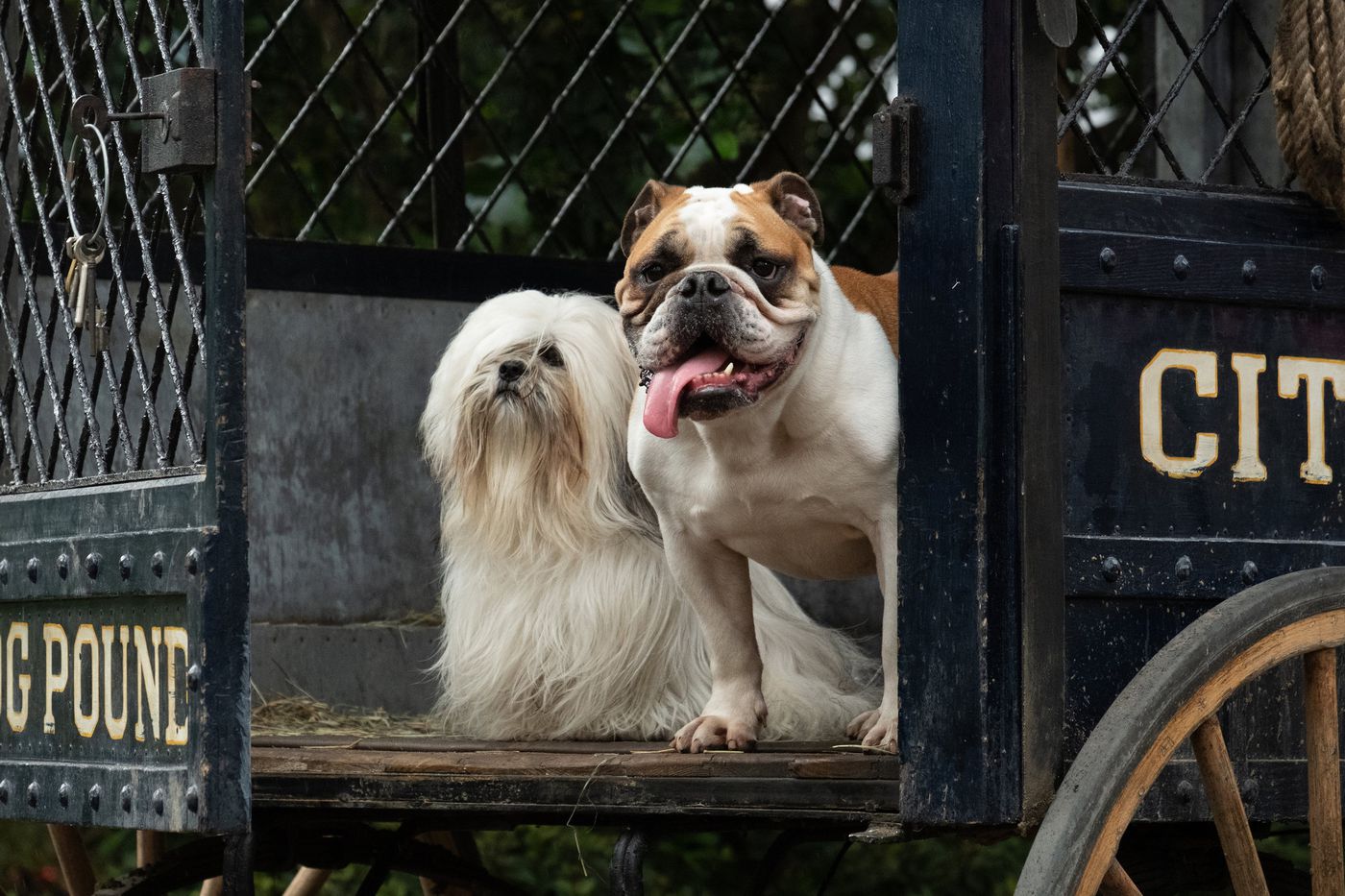 There are several decisions within this small-screen release of Lady & The Tramp’s updated revision that stand out to me. One of them is just weird, another is plain acceptable, and the last is furiously stupid. First, the weird: what possible purpose would Disney have in pitching a mixed-race marriage as the central axis on which to spin this story? It makes no sense when considering the America of the day: racial tensions in the early-aughts of the 20th Century weren’t exactly stone cold, and the fact a black woman and a white man lived together (rather affluently, despite the protestations of the odious Aunt Sarah) without a hint of trouble from the surrounding society is, at least to my mind, a little bit bizarre within the context of why this decision was made. I understand social progression of our society today, but if you’re putting this kind of thing in a film which is specifically set at a known time of problematic racial ostracization, particularly for those of mixed marriage, at least try and understand the time period. Or, maybe, set the film in today’s more progressive world. 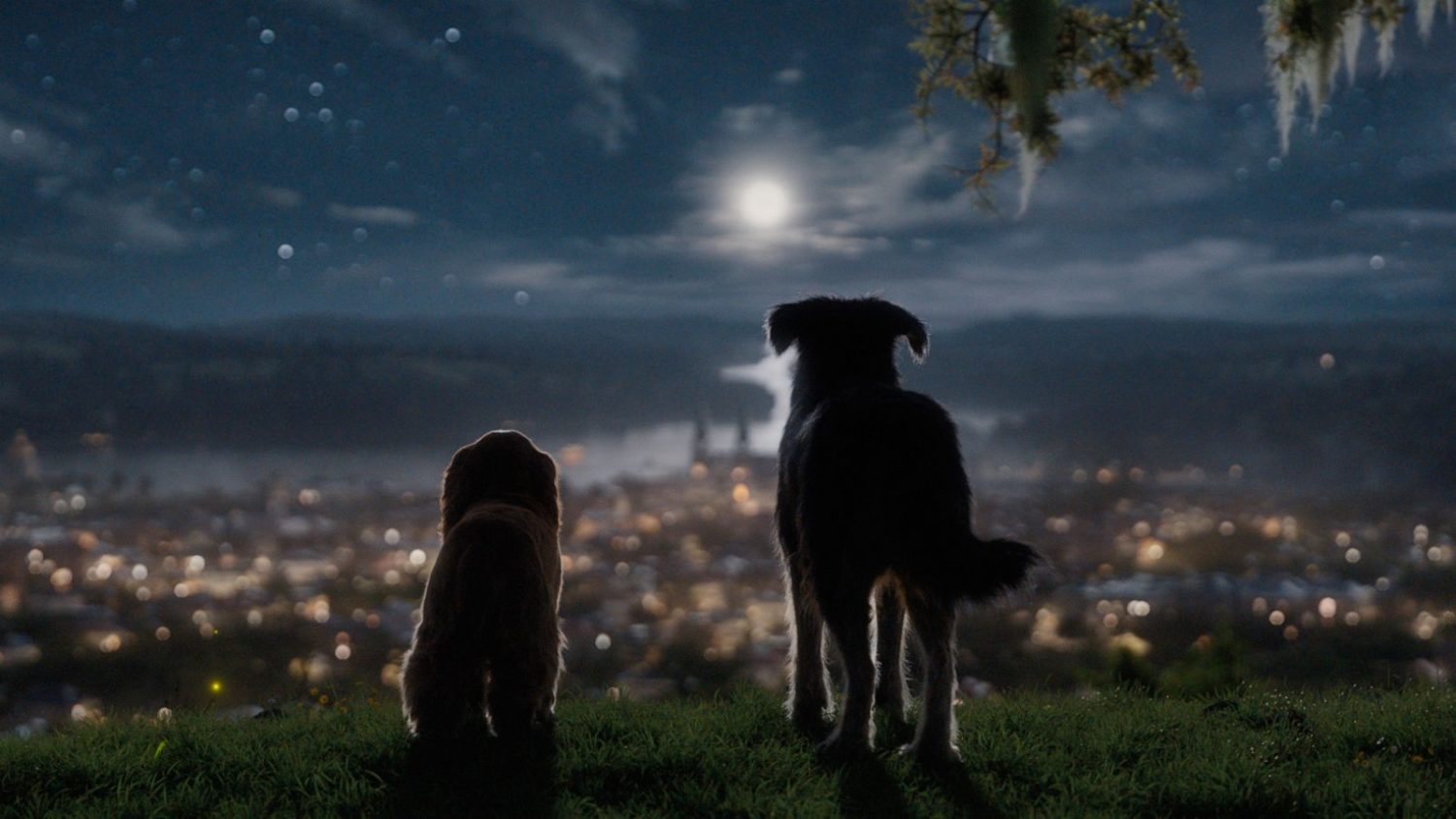 Contrasting this rather oblong new thing Disney’s canon is a rather acceptable removal of several more prominent racial issues the original animated film contains, notably the Asian stereotyping of the twin Siamese felines Lady encounters not long after Aunt Sarah’s arrival. In the original film, they sing a blatantly Eastern-influenced ditty that, in terms of timbre and tone, would strike a very off-key note today (and Disney is all about trying to win hearts-and-minds in the world’s biggest as-yet fully untapped market: China); here, there’s only the merest allusion to the cats’ ethnicity, briefly washed over in favour of a kinetic sequence of house destruction through a protracted chase around the set. Which brings me to the most furiously stupid: exactly why we need to see half-animated, half live-action animals depict these classic characters in the first place. As the expensive CG in The Lion King proved, removing the total anthropomorphism of “fictional cartoon animals” and turning them into some bastardised “photorealistic demonspawn that talk” is, and I really really mean this, terrible to watch. Our real-world animals on the screen are given bizarre facial movements that allow them to “talk” through the artifice of digital manipulation, and the effect is as jarring and creepy as poor Favreau’s Simba-led escapade not a few months earlier. Animals lack the facial cues humans need to recognise emotional signals; cartoon animals are easier to embellish with unnatural movement that we can approximate as human-esque, whereas trying to get a dog to alternately look surprised, then angry, then confused, all ends up as simply the same expression just with weirder morphing effects added.

If you’re going to do talking animals, either make all the animals entirely CG (Jock and the Siamese cats are the most obvious looking characters to benefit from computer enhancement), or don’t have them “speak” by making their mouths and faces move in weird positions. It just looks… egh. But this film is a product of its time, and a resounding lack of money. A lot of the creature effects, aided by their real animal actors, are second-rate, especially when the action tries to ramp up and get all serious-like. The Siamese cats look… off, somehow, and I’m not sure who looked at them on the screen and rubber stamped that they were suitable for a kids film – inordinately creepy, their total CG nature means they stand out like… well, like dogs balls compared to the rest of their animal brethren.

If you can make it past the weird animal effects and rearranged racial engineering Disney have embarked upon, then the next thing you have to overcome is the cheesy, sentimental story, which sits inertly on the screen as only the best Disney sugar hits can deliver. Ostensibly a storybook movie – the opening credits occur over a beautifully animated “drawing” of the town in which this all takes place – Lady & The Tramp is a very, very sanitised family film about, well, family and all that good homely stuff. The Bad Guys are obviously Bad Guys, the action is well directed and technically excellent despite narrative inertia precluding interest beyond the age of about twelve (so, right in the target demographic, eh Rodney?) and you get this falsified warm sense of a soft, feathery bedspread enveloping you in purity and honesty the longer this thing progresses. Cynics will despise this film, as they rightly should, because it cannot hold a meatballed candle to the animated original, yet in venerable Disney fashion, carving treacly cuteness and nostalgic revisionism into historical context is embedded deeply into the film’s DNA. Classic animalia films such as Disney’s own The Incredible Journey (1963), Homeward Bound and even more recent fare such as A Dog’s Way Home all suppose what animals think and do when we can see into their heads. Of course, imbuing animals with human emotions opens a floodgate of horrifying underthoughts – is a dog aware of its own shortened lifespan? Do dog’s have religion? If not, why not? If a dog can lick its own genitals why would it ever need to procreate? You know, the Big Questions. 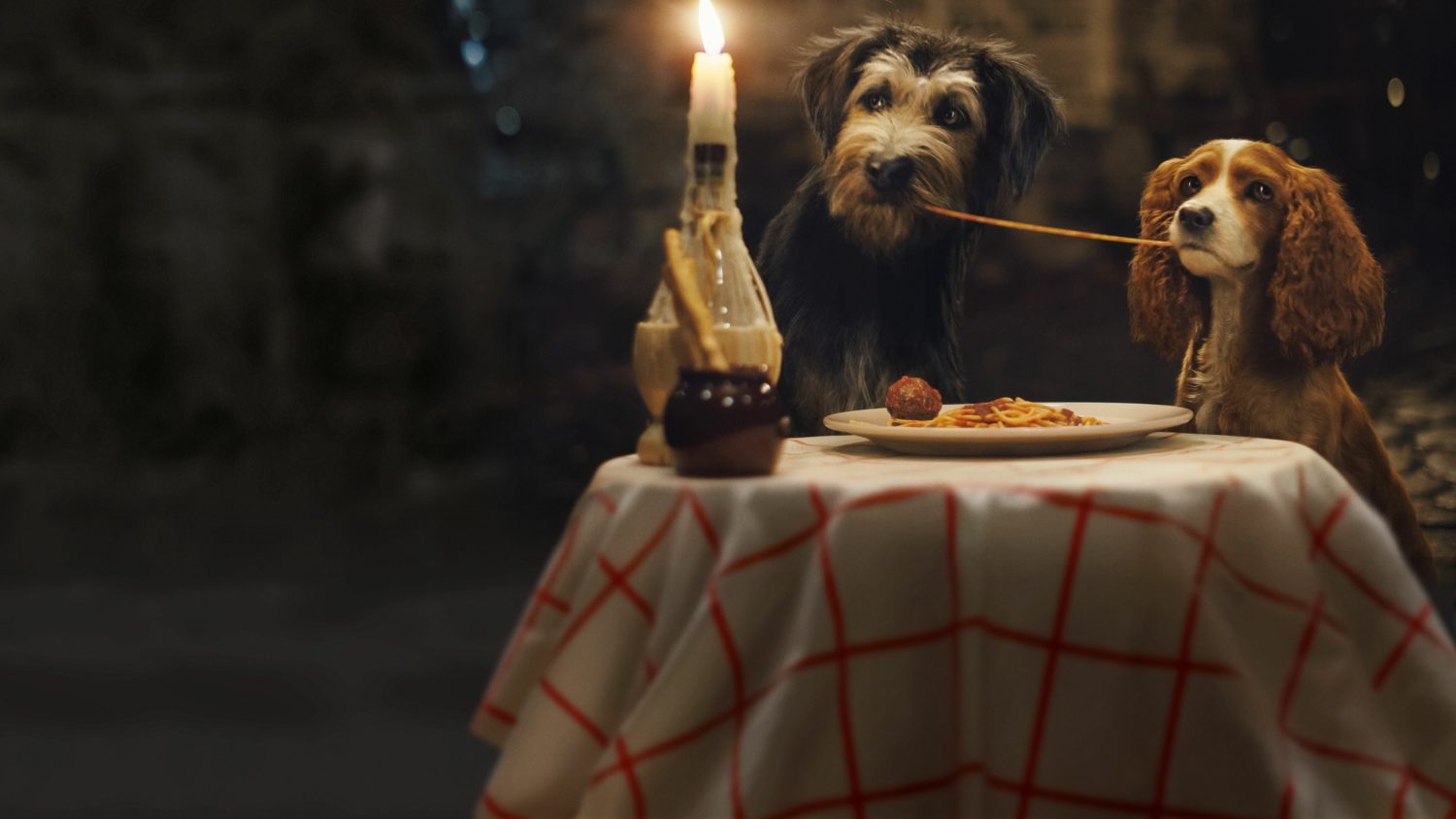 For what it’s worth, however, my kids and I did enjoy it. They laughed at all the silly gags and animal pratfalls, they gasped at the climactic chase sequence between Lady and the dog catcher (because why wouldn’t you have a climax with a dog catcher), and they spent a fair amount of time complaining about having to watch the film in the first place. So all in all, a solid night for them. If you don’t really give a shit about wasting your time, you could do a lot worse than this middling affair, like knitting or carving a chair or accessing the dark web through your illicit VPN. But there are countless hours of actual good films out there on various platforms that are more worthy of your time than this confected candy-shop of toothache-enabling canine conniptions, so why not simply go watch one of them? Enjoyment of a thing doesn’t make a thing good (I call it the Transformers Principle), and I’m okay with sounding like a hypocrite for not recommending something I giggled at occasionally with more gusto, if only because I’m intelligent enough to work out that the film is actually quite terrible and does most of its intended audience a disservice. 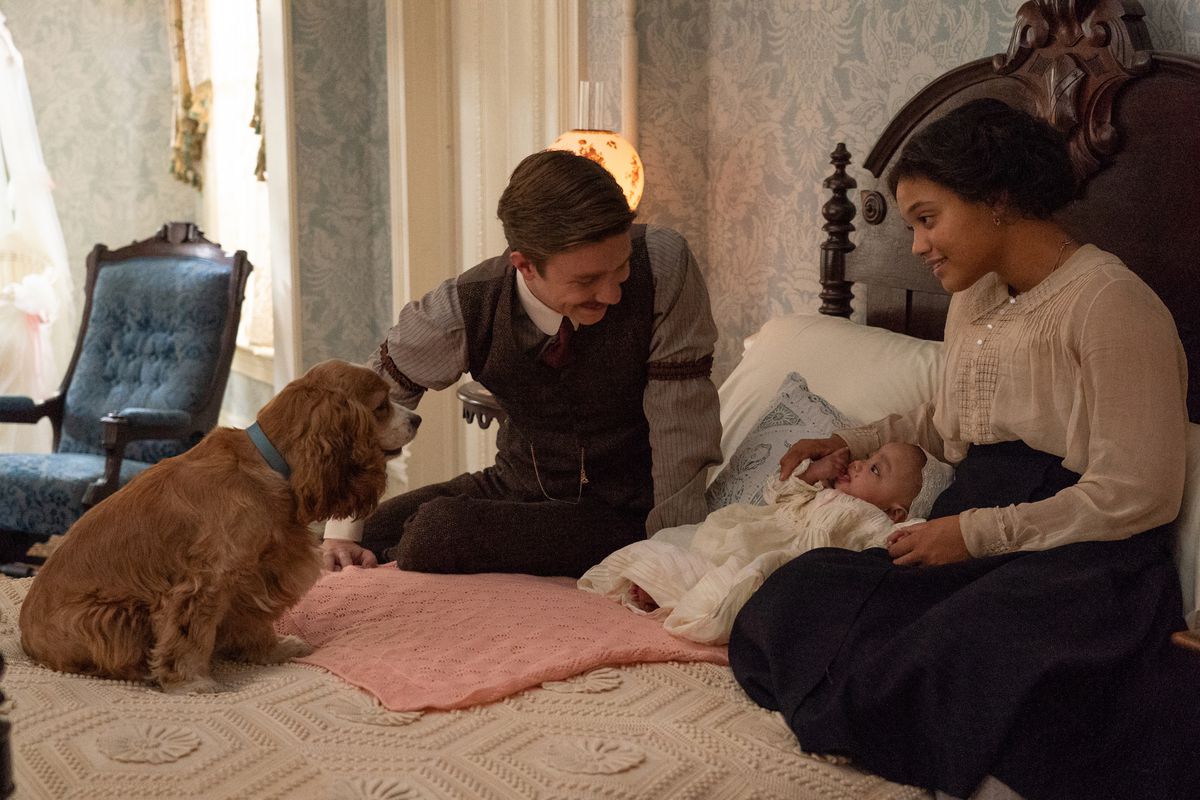 Lady & The Tramp is cutesy-wootsie sweet for those without a cynical bone in their bodies. There’s not a challenging thought or offensive moment anywhere to be found in Charlie Bean’s indifferent film, a film that lacks the soul of the original or the heart to really update the film for a modern era. What worked in the animated film doesn’t easily translate into live-action no matter how fatuous F Murray Abraham’s rendition of the pasta-serving dog-struck restaurant owner might be; Disney need to let go of trying to remake their animated films beat-for-beat and instead try and do something new and unique. That’s asking a lot for a company as risk-averse as the House Of Mouse, but had they been open to alternative interpretations of the underlying story I think there might be a chance one of these utterly unnecessary remake films might actually turn out okay. Lady & The Tramp is suffocatingly trite at best, offensively bland at worst.