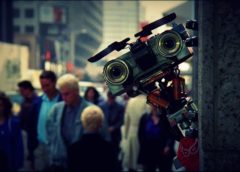 The robot who once cried out “no disassemble” becomes a literal assembly line production in Short Circuit 2, as Johnny 5 takes on new York City (although filmed primarily in Toronto, Canada) with the assistance of the fumbling, clown-car representative of minority in Fisher Steven’s egregious “Indian” nerd Ben, the only other returning name from the first film aside from Johnny 5 himself. Tim Blaney once more brings the skeletally designed Johnny 5 to life with a masterful puppetry and vocal delivery, although it’s fair to say that the robot gets a lot less screen time this time around, more’s the pity. It’s a fairly pedestrian affair, lacking the charm of the original film (director Kenneth Johnson replaces John Badham behind the camera here) despite an earnestness and eagerness to live up to the mandate of robotic adventure, and the movie lacks the kind of easy-going “what is life” subtext the original contained in spades, replacing it with a far more pessimistic tone that some kids may find harder going. 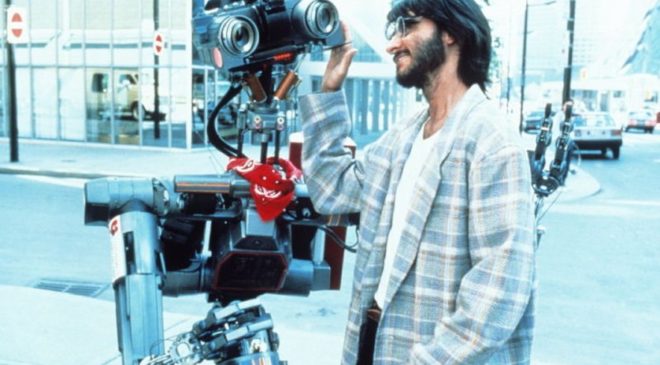 Now living in new York City and selling miniature toy versions of the Number 5 NOVA robot design on sidewalks for some unexplained reason, robotics expert Benjamin Jahven (Fisher Stevens) meets fake-watch-selling “entrepreneur” Fred Ritter (Michael McKean) and desperate toy company buyer for Simpson’s Toys, Sandy Banatoni (Cynthia Gibb), in order to manufacture 1000 of the tiny gems within 30 days – an impossible task until Ben’s friends Stephanie Speck (Ally Sheedy in a vocal cameo) and Newton Crosby send the sentient robot Johnny 5 (voiced by Tim Blaney) to the city to help. With Ben and Fred desperate to supply the toy company, and using an abandoned building in which a pair of incompetent jewel thieves (David Hemblen and Dee McCafferty) are tunnelling into a neighbouring basement vault as their base, Number 5 discovers that humans are indeed “complicated” and the input he gets in the big city may eventually lead to his undoing. 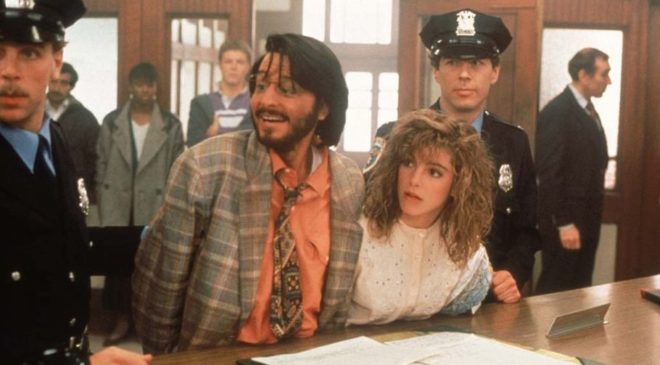 Look, Short Circuit 2 is really quite a charming little thing, despite being stranded wholeheartedly within the mid 1980’s in both tone and style, and despite the decision to place the world’s least charismatic “Indian” character front and center in some sort of romantic subplot, there’s little of substantial note to criticise within. Okay, the story’s a bit naff by post-millennial standards and the whole jewel thief angle doesn’t quite work, and you get the sense that Benjamin ought to have lost at least a little bit of his frustratingly overplayed ignorance with social norms, but as a genteel kids flick goes this one ticks all the boxes. The humour is played broad and silly, the sight-gags and plot twists feel believable if not always subtle, and the generic characters and soft-focus 80’s pleasantness in these kinds of B-movies allows audiences to lap up the fun without feeling shortchanged by a deficit of brains, simply because the film isn’t that smart. 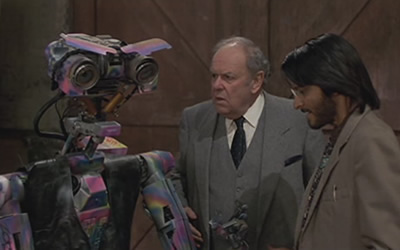 Short Circuit 2 was written by original film scribes Brent Maddock and SS Wilson, and there’s a fair amount of repetition here when it comes to the jokes on – and about – Johnny 5, with more demonstrably inane “input” gags surrounding the sentient Mechano set. The film plays to the inadequacy of Benjamin in social situations, the infantilisation of Johnny 5’s lack of worldliness, and rounds off with a spectacularly underwhelming climax (yeah, once again Johnny 5 appears to be killed off, only to magically avoid Silicone Heaven not through sleight of hand but with the aide of paramedic resuscitation paddles), but there’s an ingrained enthusiasm and glee with which everyone appears to manifest as they wreak havoc on New York City. Incoming director Kenneth Johnson (Alien Nation, V: The Series) apes John Badham’s clownish approach to the material from the first film; this is one of those rare sequels that feels like it was made by the same person as the original, yet it isn’t – Johnson’s use of visual effects is well crafted, his sense of pacing is excellent, and his direction of the on-screen cast is really quite sweet. 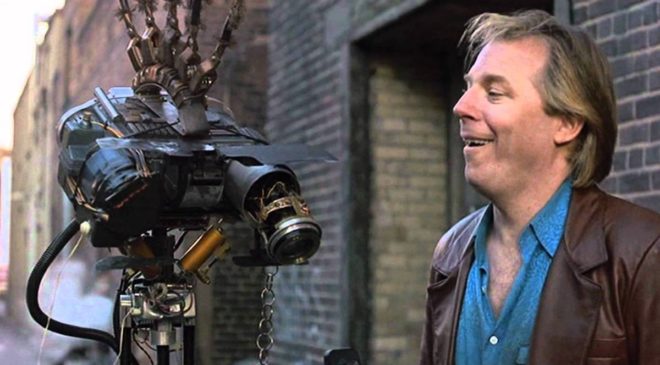 Fisher Stevens returns to the role of Benjamin in a caricature of Indian cliche that would make even Apu from The Simpsons embarrassed. Dithering and often reactive within his own story, Stevens’ elevation to leading role with a character of such noxious racial cringe it’s honestly hard to watch. Of course, the 1980’s were a different time, and Hollywood of the day was never going to cast an actual actor of Indian decent as the lead in their Big Summer Kids Movie, so watching Stevens’ work now within a modern context actually makes me wince. Coming away far better is co-star Michael McKean, who turns a charlatan and swindler into the most lovable bad-guy-turned-good of the decade; Fred Ritter isn’t the most ingenuous grifter, and he’s got a better knack of finding trouble than actually keeping his financial head above water, but with McKean’s cheesy grin and shucks-n-lumps New York attitude, he’s the most accessibly emotive aspect of the whole movie. Token romantic interest Cynthia Gibb is good but underutilised, with a terrible role given short thrift by unconcerned screenwriters, whilst Jack Weston as the neighbourly Oscar, who turns out to be anything but a good guy, seems to be having an absolute hoot. 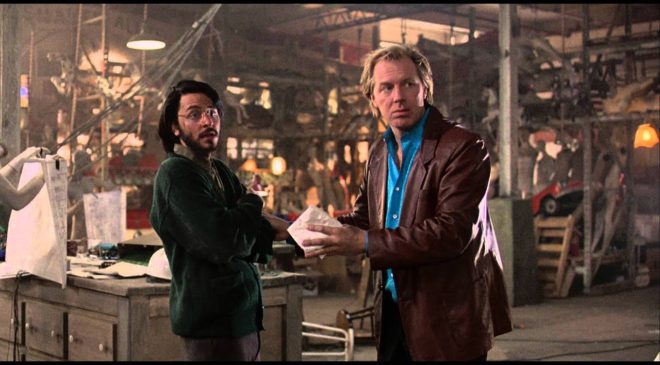 The star of the show, however, is once again the film’s most expensive prop, Johnny 5, the ganglion of servos and batteries and wiring that retains his childlike charm with a “kid in a big city” performance. Once again the robotic effects are the drawcard, and both director Johnson and performance artist Tim Blaney know it: although it takes the film a while to actually get Johnny 5 into the story, once he’s there the film lifts considerably. Nobody watching a film entitled Short Circuit 2 wants to see human interaction unless it’s accompanied by one of Johnny 5’s trademark quips or asides, and when the glib sprocket set finally arrives on screen the film takes off, lurching from a sputtering pseudo-crime film into an outright comedy farce, with a little bit of romance thrown in. Your tolerance for Steven’s acutely self-aware Indian caricature performance notwithstanding, Short Circuit 2 delivers exactly what it says on the box, and delivers it really well. It’s not a world beater, but it’s a sequel that stands on its own as a worthy successor to its progenitor.