I’ve always had a soft spot for Hitchcock’s The Birds, his 1963 masterpiece of animalia terror and technical virtuosity. Based almost only in name on Daphne Du Maurier’s 1952 short story, The Birds is a template-setting Hollywood blockbuster noted for multiple achievements in cinematography, scripting and gradual, withering rising horror. I recall the night my mother let me watch it as a younger child, we sat glued to the screen as the birds of the film started to attack people, first singularly and then more brazenly, and it opened my eyes to just how effective a filmmaker Hitchcock was at the peak of his powers. The famous sequence in which star Tippi Hedren sits outside a children’s classroom, a gathering murder of crows building behind her, remains a truly skin-prickling exercise in tension elevation; it’s a film filled with such moments, and for this reason alone remains my personal favourite of all Hitch’s movies, even moreseo than the highly vaunted Psycho. 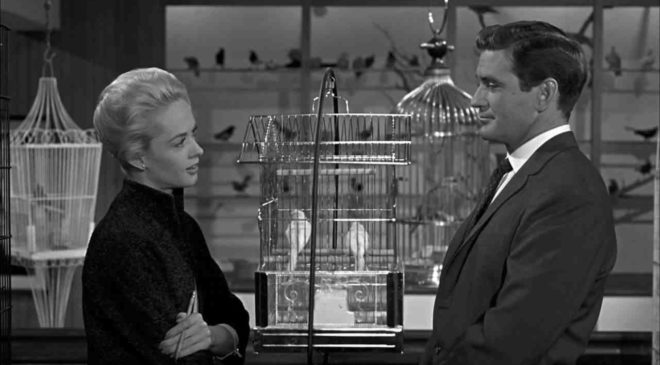 Young socialite Melanie Daniels (Tippi Hedren in her big-screen debut) meets defence attorney Mitch Brenner (Aussie actor Rod Taylor – The Time Machine) whilst visiting a San Francisco pet shop. After briefly flirting with him, Melanie decides to buy a pair of lovebirds and gift them to him out of intrigue, only to discover that Mitch is travelling up the coast to visit his mother and sister in the small beachside hamlet of Bodega Bay, in Northern California. Following him, Melanie meets several inhabitants of the small town, including local schoolteacher Annie Hayworth (Suzanne Pleshette) and innkeeper Deke Carter (Lonny Chapman). Secretly sailing across the bay to the Brenner residence, Melanie is swooped by a gull, and subsequently assisted by a mortified Mitch. Melanie meets Mitch’s mother, Lydia (Jessica Tandy), and sister Cathy (Veronica Cartright), and slowly gets to know them. However, Bodega Bay is about to come under increasingly more brazen bird attacks, from school children to local residents all suddenly needing to evacuate the town. Trapped inside the Brenner farmhouse, Melanie, Mitch, Lydia and Cathy have to fight for their lives against the suddenly swarming malevolent flocks of birds. 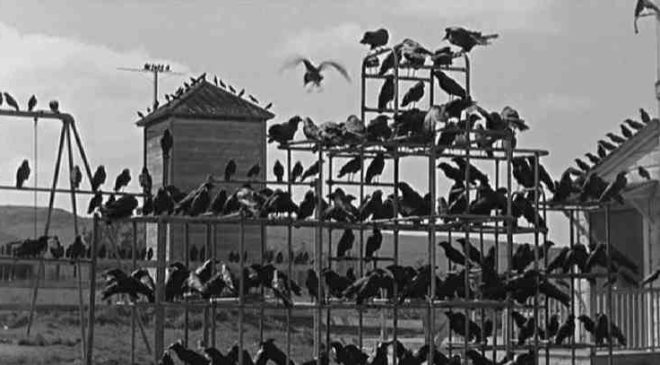 There’s something inherently eerie about unexplained attacks by animals who are normally quite peaceable. Birds, particularly bin-chickens and other seabirds, are not exactly known for attacking humans either singularly or en masse, which makes The Birds‘ particular activities quite unnerving. The best horror films take root in the ground of manifest ordinariness, and Bodega Bay’s bucolic backdrop is nothing of not entirely ordinary. It’s the perfectly bland setting for one of Hitch’s most technically accomplished horror films, upon which countless avian creatures start to attack humanity out of some unexplained desire. It’s the inexplicable motivation for the attacks that draws a lot of the terror out of the plot, for it’s not like we can reason with birds and ask them what their problems are: they just attack, and we must defend. Hitchcock’s perfectly timed sense of menace, whereby the first half hour or so sees no birds attack at all, generates that oddly uneasy feeling of impending dread, coupled with the film’s lack of orchestral score (seriously, there’s no accompanying music in the film whatsoever, save for some children singing at school and the overpowering squawk of birds) and Hitch’s unwavering camerawork and editing, that make The Birds so palpably terrifying. 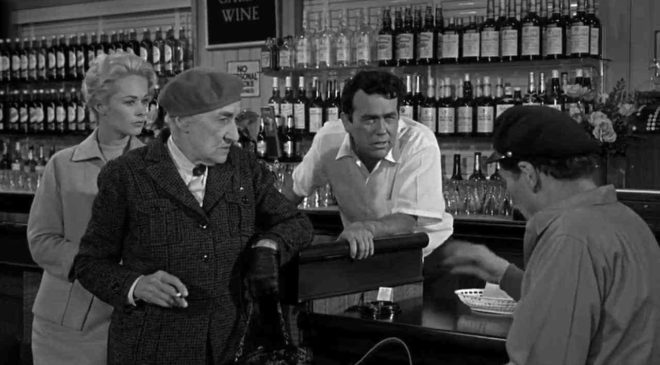 It helps that the characters within are all so obviously normal. Thrusting everyday people into terrifying scenarios is key to good thriller films, and The Birds is no exception to this: Mitch and his family personify decent, hardworking American life, while Melanie Daniels represents the somewhat diffident, flittery upper-class type who falls for the earthier lawyer. Jessica Tandy’s Lydia, a suspicious and abrasive maternal figurehead, and Veronica Cartright’s earnest and enthusiastic Cathy, bring varied reactions to the mystery bird attacks, from fear and abject abhorrence to gibbering terror later in the movie. It’s obviously Hedren who holds the bulk of the film together, as Melanie, with her perfect diction and radiant screen beauty, but for me it’s Rod Taylor’s realism and stoicism in his performance that anchors a lot of the film’s antics in truth. Of all the cast, it’s Taylor who fleshes out the role he’s given honestly, without any pretension whatsoever; Suzanne Pleshette comes close, as Annie (a former flame of Mitch’s), and Ethel Griffies as resident ornithologist Mrs Bundy provides a wicked cackle and assured belief in the order of nature (before it all goes tits up, anyway), but The Birds isn’t really about character as much it is building dread. 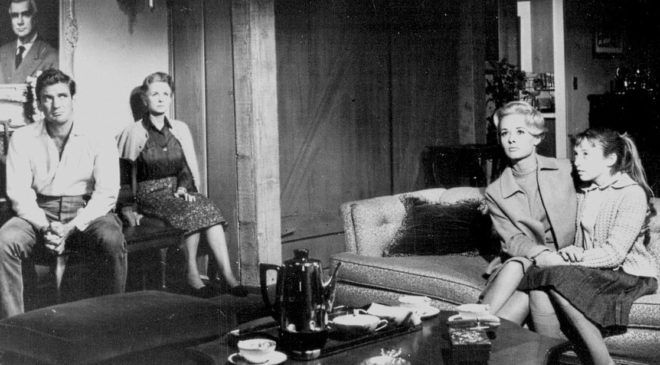 And what dread! The film came well before computer graphics, and as such contains only effects achievable by film technology of the day: a lot of the film is shot on a sound stage, using rear projection footage and a technique called “sodium vapour process” (a progenitor of what we now call “green screen”) to place actors in a setting external of a studio lot. The birds of the film are a mixture of real life animals, cardboard cutouts (for long-shots), taxidermy fakes (for close-up bird strikes) and all manner of puppets, dolls and other tricks to fool the eyes. Hitch worked out that having a dozen real birds on a set between a dozen fake ones, causes the movement of the live birds to trick the brain into seeing movement everywhere, so making a sequence look positively more horrifying than it might otherwise. Animated birds, rotoscoped birds, brilliant matte shots and innumerable technical flourishes were used to create a ratcheting sense of fear and dread within the dialogue sequences, as the birds of Bodega Bay attack in greater and greater numbers as the story progresses. For their time, these effects were state-of-the-art; in modern high definition presentations some of the seams do become readily apparent, but the overall aesthetic of the film is a uniquely homogenised terror, brought to life by Hitch’s endlessly inventive creativity. 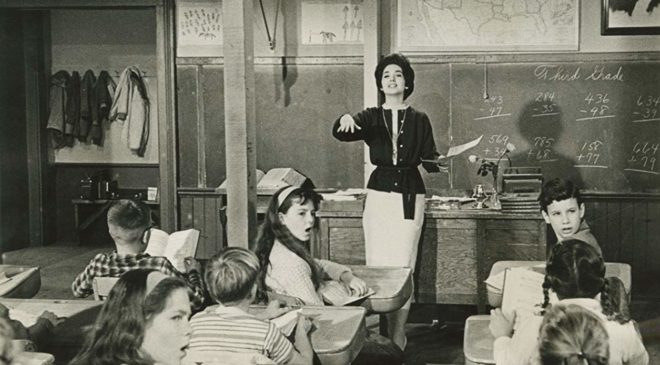 Hitchcock’s The Birds isn’t so much a character piece as it is an example of brilliantly executed semi-supernatural horror. The film’s ambiguous ending, in which we see the Brenner’s and Melanie escaping via car, leaves the story open to interpretation and possible sequels (a poorly received in-name-only sequel was released in 1994) and fails to give the viewer a sense of completion, an uneasy method of extracting the last drop of joy from whoever happens to be watching. Downbeat endings are rare because they’re so difficult to pull off well, but Hitch’s decision to simply leave the attacks unexplained and the scope of the terror limited simply to the small hamlet of Bodega Bay elevates the film’s insular setting. For a film of this vintage, to still be able to achieve the heebie-jeebies in a modern audience, is indicative of just how psychological and well thought out The Birds’ insidiously creepy premise truly is. Coupled with decent actors and the director’s famed technical prowess, I’d say it’s perhaps his most accomplished horror film and sits right alongside Psycho as a masterwork, a flawless piece of cinematic pop-culture that remains narratively undiminished by time.