The most anticipated sequel in history delivers on the promise of the first; Incredibles 2 is hands-down fantastic. Or, yeah, incredible. It’s been 14 years (!) since we last saw Mr Incredible, Bob Par, his wife Helen and kids Dash, Violet and Jack Jack, about to face off against the last-minute arrival of The Underminer, and at the time we all figured it wouldn’t be too long until a second film came along. Director Brad Bird went off and gave us Tomorrowland, a Mission Impossible film, and another film for Pixar in Ratatouille, but lingering whispers of an Incredibles sequel refused to gestate. Every “what sequel do you wish to see” poll on the internet was almost always won by the Incredibles; fans wanted it, critics loved the original and the studio could smell box-office success: the fact it took a decade and a half to get an Incredibles sequel to the screen seemed like Pixar may have missed the boat, but the end result is a film that enjoys the same heart, soul and family fun as its progenitor. 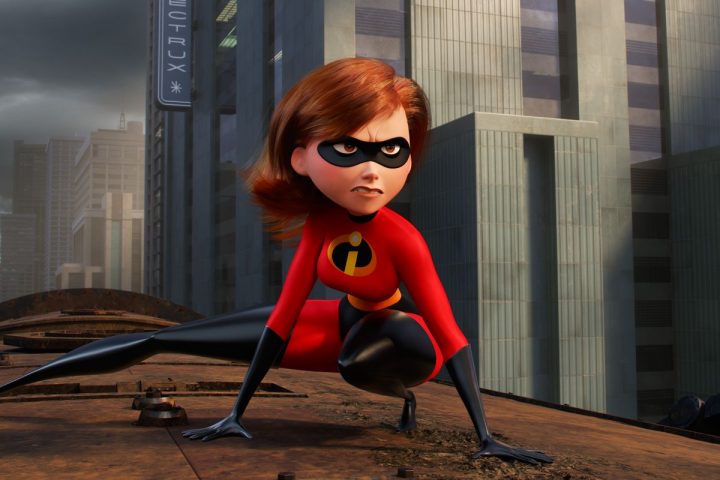 The aftermath of the attack on Metroville by the Underminer sees the government’s Superhero Relocation Programme – designed to prevent the discovery of the identities of hidden superheroes – scrapped, leaving the Parr family, Bob (Craig T Nelson), Helen (Holly Hunter), Violet (Sarah Vowell), Dash (Huckleberry Milner, replacing previous voice actor Spencer Fox) and Jack Jack (Eli Fucile) without protection in the face of their heroic deeds. A wealthy philanthropist, Winston Deavor (Bob Oedenkirk) and his sister, Evelyn (Katherine Keener) invite the Incredibles, as well as Lucias Best (Samuel L Jackson) aka Frozone, to perform publicity stunts as a way to generate enthusiasm for overturning the act that banned superheroes from working. Winston chooses Helen as his anchor and publicity spearhead, working under her hold identity of Elasti-Girl, leaving Bob to remain home and become a Mr Mom, something he feels he should be good at because, after all, he’s Mr Incredible. However, Jack Jack’s emerging superpowers run him ragged, and he eventually turns to superhero costume designer Edna Mode (Brad Bird) for help. Meanwhile, Helen is stumped by new villain Screenslaver, a criminal using technology to mindwash his victims and thwart the resurgence of superheroes to the public consciousness. 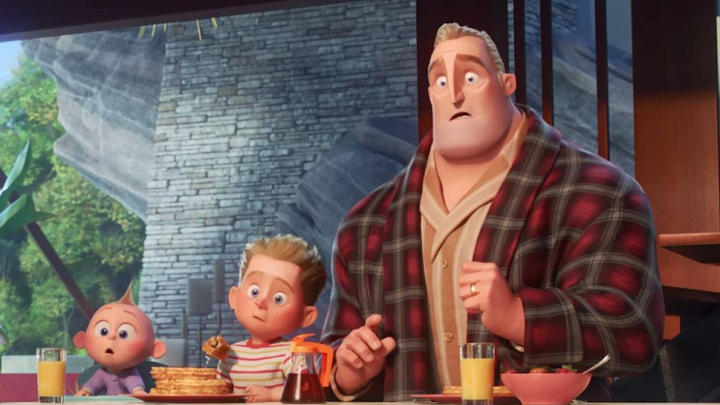 Wildly inventive, brimming with Pixar’s trademark character-driven heft and one of the most beautifully rendered animated movies of the year, Incredibles 2 is a perfect sequel. It homages the original – heck, it picks up immediately where the first film closed off – with nods, winks and references to the 2004 masterpiece, offers a different viewpoint for our favourite characters, and continues the family-oriented themes established as part of the franchise’s world-building success. Sequels often lazily retread ideas and concepts from early successes, attempting to generate excitement without really doing much work to propel the story or characters forward meaningfully, and filmmakers often fall into the trap of resting on their laurels by giving fans what they think they want without bothering to offer something genuinely fresh: thankfully, Brad Bird is a far smarter director than that, and while Incredibles 2 does spin concepts from the first film into alternative ideas here, the onwards-and-upwards trajectory of the Parr family’s superhero life goes in some startling new directions. 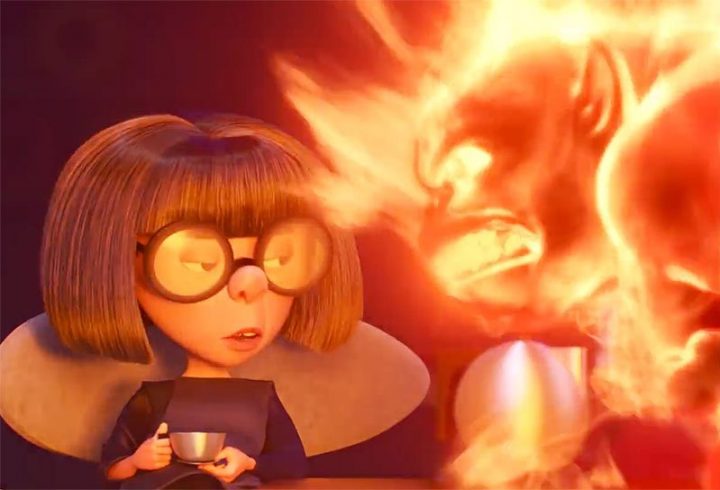 In keeping with any successful sequel, Incredibles 2 sees the primary elements of the first film return to play, including the entire original cast (except Spencer Fox, no doubt no longer sounding like a kid in the intervening decade or so) as well as editor Stephen Schaffer and composer Michael Giacchino, who brings his jazzy, brassy score back for another showcase of brilliant musical accompaniment. The screenplay (written again by Brad Bird) is just as light-fingered with its many, many quips, just as complex with themes of personal growth, ownership of self and sense of identity, as any Bird has been involved with, and the balance between fun and seriousness wedges right into the sweet spot modern audiences demand. The gags, both visual and verbal, are a delight, the introduction of a swag of new super-powered heroes is gleefully better than anything the MCU might offer, and the heartwarming sense of familial love remains as strong as ever despite the plot’s attempts to divide and conquer. Bird’s command of story is A-grade sublime, he gives each major character an arc, the supporting characters each get a “moment” to shine, and the film feels incredibly tight for its entire 2-hour runtime. What, an animated film that hits the two hour mark and doesn’t feel stretched (ha, an Elasti-girl pun!)? That’s Incredibles 2. 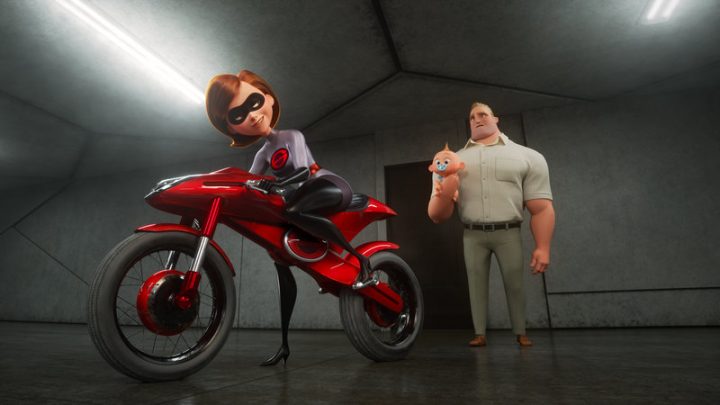 One of the real treats in the Incredibles movies has been the setting, that of a utopian 50’s style America in which superheroes exist, much like the Golden Age of the comic books upon which the premise is lifted. Bird hit a similar aesthetic in his first film as director, The Iron Giant (which, if you haven’t seen yet, is an absolute must-see) and its this bucolic historical resonance that makes these movies so wonderfully entertaining. The near-future technology involved is anachronistic to a fault, and the vehicles, houses and clothing of the period are decidedly suited to the era, but the modern skewing of storytelling brings with it a clash of cultural expectations that entertains in substantial measure. The cinematography on the film, overseen by Erik Smitt and Mahyar Abousaeedi is wonderful, the widescreen frame packed with detail and clever “effects”‘ the powers of the superheroes depicted on screen are accompanied by the kick of lasers, energy beams, explosions and (controversially) the Screenslaver’s epilepsy-inducing hypnosis signature. In short, the film looks sumptuous, a no-expense-spared visual treat that, when you compare it to the original movie, is precision executed and production designed with every ounce of style Bird and his team can manifest.

Naturally, with all our old favourites returning, comes an opportunity to give them something new to do, and Bird’s creative team deliver some absolutely delightful new antics for the various costumed heroes to do. Violet’s use of her invisibility and force-field powers really comes into its own during the film’s climactic showdown (because these films always have a climactic showdown), and Dash’s super-speed and vital immaturity is a thunderous combination. Helen’s stretchy powers are highlighted well, and Bob’s intractable physical strength – contrasted by his own feelings of inadequacy as the at-home dad – are again creatively mined. The supporting roster of new heroes, from wormhole-creating Voyd (Sophia Bush), and Krushauer (Phil LaMarr) provide nice laughs and new powers (special note, the addition of Reflux, an elderly gent who vomits up molten lava, feels like a bit-part from Mystery Men, and gets several chuckles) while fan-favourite Frozone, again voiced by Samuel L Jackson is given larger scope in this movie as well. The battles are larger and more complex (given the number of participants) and the scale of the destruction is inevitably bigger, balanced out by Bird’s sense of humour and the characters’ well rounded delivery. Craig T Nelson’s flustered Mr Incredible is knowingly accurate, Holy Hunter’s mission-focused Elasti-girl is as solid as ever, while Katherine Keener and Bob Oedenkirk do excellent work as the film’s incoming protagonists. About the only small fault within the film (and it’s microscopically small, really) is that I picked who the true identity of the Screenslaver was well in advance. Maybe I’ve seen too many movies. 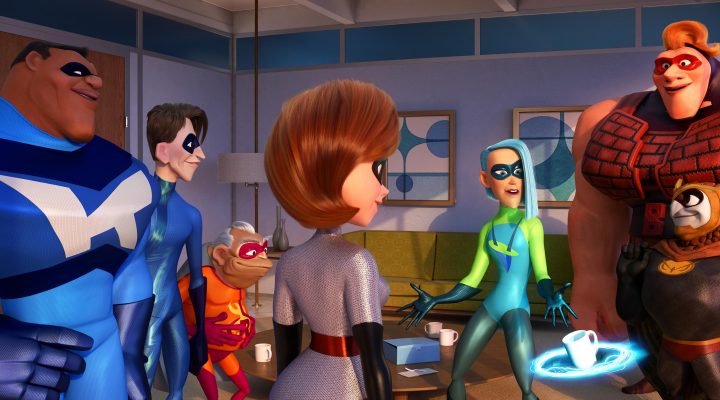 The best part of Incredibles 2? That falls to both infant Jack Jack and the fan-favourite Edna Mode, the world’s foremost superhero costume designer. Jack Jack’s package deal on powers – from phasing, laser beams, turning into some kind of devil-beast, as well as a host of others, were glimpsed in the original movie but form a large crux of this film’s plot, and give the character a lot of investment – similar to Scrat from the Ice Age movies, he’s there but not really an active participant in the overall plot, although his involvement’s tangential nature does drive some of the story – while Brad Bird’s rasping voice work on Edna Mode is, as it was previously, an absolute blast. 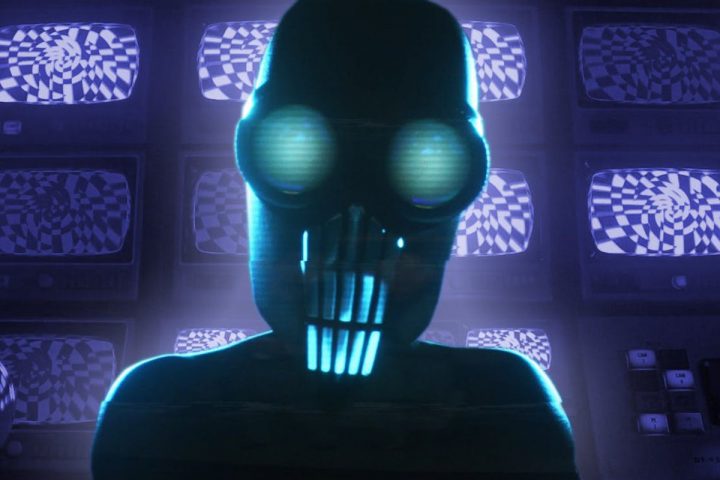 Incredibles 2 is a load of fun. There are surprises, scares, nice spins on established characters and ideas, and a genuinely cool roster of new supporting characters. The film feels like a natural progression of the original – which is where a lot of sequels often fall short – and I think the fact that most of the original gang are back behind the scenes here has a lot to do with it. Bursting with the same playful sense of heroism as the first film, Incredibles 2 is a bright, brilliantly conceived blast of energetic throwback superheroism, complete with a lovely family dynamic that engenders more empathy from the viewer than many films can ever hope to achieve. It helps that we naturally love these characters, that the decade or so between movies has allowed us to really take them into our hearts; I can only hope that another sequel doesn’t take anywhere near as long to produce. Incredibles 2 is another blockbuster winner from Pixar.