This review is based on the available 16mm 1925 release print of the film. Later editions include some coloured footage, extra scenes, nascent sound effects and other ancillary features. The film is available on BluRay here, and can also be found on YouTube.

Plagued by problems with production, distribution and even its own legacy, Universal’s 1925 silent film version of The Phantom Of The Opera was the second film version of Gaston Leroux’s 1910 novel and the first English language edition. The film starred Lon Chaney, who had successfully parlayed the studio’s previous “monster movie”, The Hunchback Of Notre Dame into a lengthy career in the genre, notable primarily for being able to do his own prosthetic makeup. Although the film is credited to director Rupert Julian, Phantom would be reshot by no fewer than two other studio men – producer Ernst Laemmle and stand-in director Edward Sedgewick – and was infamous for the hostile relationship between both Julian and Chaney, leading to tensions on-set that meant Chaney would have to direct many of his own scenes. The film sticks pretty faithfully to Leroux’ original story (with a few exceptions, of course), and obviously goes nowhere near Andrew Lloyd Webber’s iconic soundtrack score due to its vintage: is the silent Phantom worthy of its legacy in horror, or is it overshadowed by modern retellings and a ghost of its former self?

The Grand Opera of Paris, and rising star Christine (Mary Philbin) is an understudy for famous operatic diva Carlotta (Virginia Pearson) in the latest production of “Faust”. An entity known colloquially as the “phantom” of the opera (Lon Chaney) secretly manipulates Christine’s career by threatening the Opera’s management with all manner of death and destruction were they not to let Christine perform. For the Phantom is in love with Christine, and wants to make her a star. Christine, who loves Raoul de Chagny (Norman Kerry), makes an uncomfortable alliance with the Phantom, until he threatens her love with death, whereupon she knows she must make her desperate escape.

Irrespective of Phantom’s creative woes, there’s something intrinsically pure about the 1925 silent edition of the story. It’s as uncorrupted a version as we’re ever likely to see, although it’s fair to suggest that Rupert Julian’s condensed version of the original text (the film’s screenplay is uncredited, but various sources indicate a plethora of writers touched it at some point) contains its own extravagant manipulations for the silver screen. The well-known story hits all the beats we’ve come to expect, including the infamous chandelier “accident”, filmed in the enormous opera house set at Universal Studios (a set that stood until 2014, when it was mothballed and the soundstage dismantled), and although the print of the film I viewed was significantly degenerated, the drama, pathos and horror of the film’s incredibly passionate story remains. 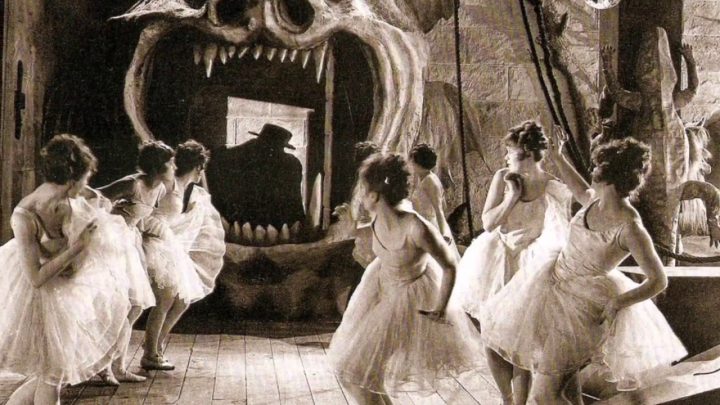 The Phantom story is one of unrequited love, a mix of ambition and passion and resentment, with Chaney’s titular freak a former inmate on “Devils Island”, where he became a master of the “Black Art” (whatever that is, but I guess it’s nothing to do with painting). Whereas modern retellings have the Phantom being scarred at a significant juncture in his life, in Julian’s version the creature has always been disfigured, since birth, which creates in itself a far greater empathy for his motivations towards Christine throughout. The film builds up to the reveal of the Phantom relatively slowly comparative to other examples of the nascent horror genre at the time, but when it does, Chaney delivers an extraordinarily physical and memorable performance. As mentioned above, Chaney did his own makeup for the film, with the studio refusing the promote the character’s unmasked look until after its wide release in November of 1925, and it’s a startling and iconic look for the role. The Phantom’s sunken eyes, uplifted nose and hideous teeth reputedly made early audience members faint, a promoters dream I’d wager, and whether or not that’s true it’s worth noting that the makeup effects the actor employed are quite decent and do legitimately look ghastly. The intended effect, no less. 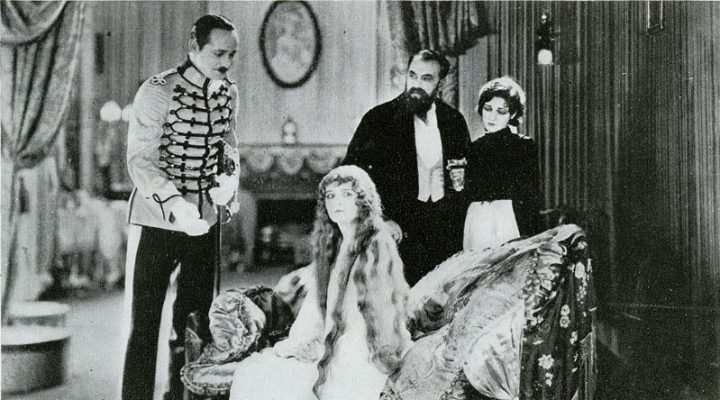 Co-starring alongside Chaney is the beautiful Mary Philbin as Christine, the handsome Norman Kerry as her intended lover, Raoul, superstitious stagehand Florine (Snitz Edwards), and the various deinzens of the Parisian operatic scene who make up the multitudinous crowds in attendance. Philbin does a good job as the delicate flower that is Christine, torn between the Phantom and Raoul’s affections, while Kerry is suitably debonair and upstanding as the other male lead of the piece. The film’s participant ensemble work diligently to manifest a creepy, almost Gothic atmosphere within the film’s incredible sets, ballerinas and creepy stagehands and suited businessmen all gathering in place to stare in shock and awe at the Phantom’s grisly visage. In keeping with the theatricality of early silent cinema, much of the acting style is incredibly overdone, loads of raised eyebrows and fainting women (my God, the women liked to pass out a lot!), so you have to consider this when appraising the film’s performance merits. 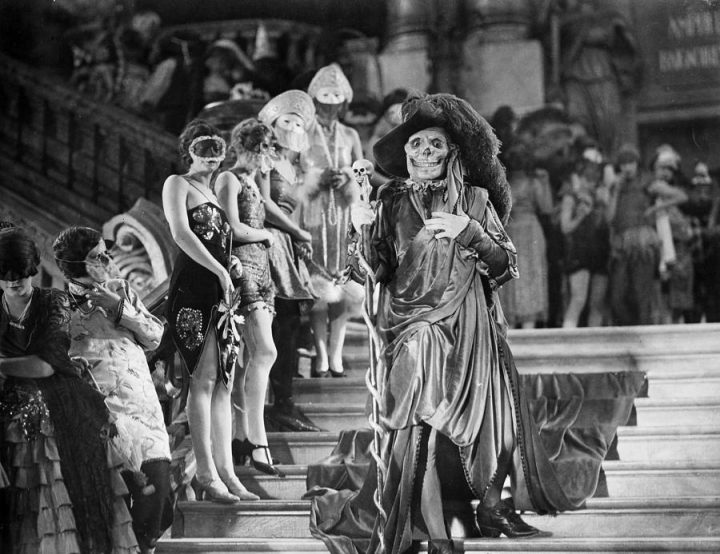 Much of this Phantom’s splendour is derived from the fabulous set design, lighting and photography, all of which is really rather terrific. The catacombs and dungeons beneath the Opera House are rendered in stark, dank realism, multi-layered and sprawling as they indeed probably are (I’ve never visited the building in which this story supposedly takes place, but knowing Paris I’m guessing the actual truth isn’t too far removed from what Julian delivers here), and the cinematography (three names are credited, Milton Bridenbecker, Virgil Miller and Charles van Enger, so it’s impossible to know who shot what) is, for the time, astonishing. The framing of the film’s key sequences, especially a scene in which the Phantom uses a makeshift snorkel to venture under the water beneath a sewer and rise up to snatch his Christine, are excellent, a moody and atmospheric. Apparently, some scenes were shot in colour (or colourised later, I’m unsure), which would have looked spectacular for the day, but the grand hallways and performance hall of the building and the vaulted ceilings and labyrinthine corridors down below all magnify an opulence and dread fearfulness that would have had audiences quaking in terror. 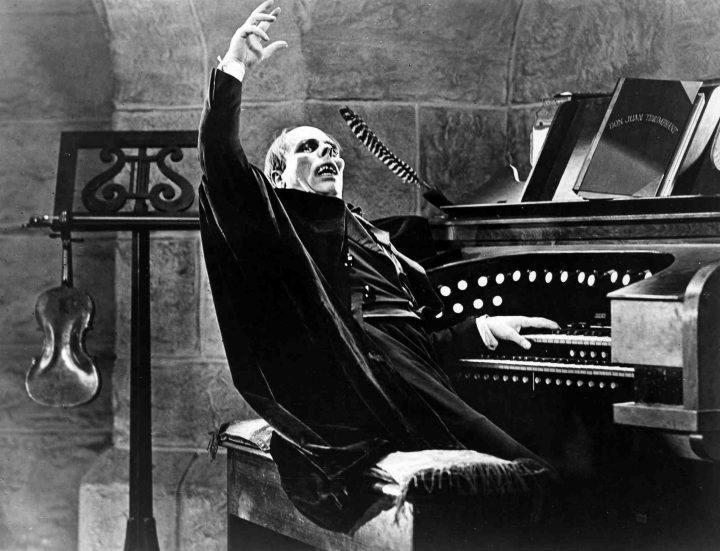 If you take into account the film’s vintage, there’s every reason to suggest that Phantom Of The Opera’s opening English language version is the definitive version. It’s remarkably potent film-making, filled with imagery that stands the test of time even now, nearly a century later. Chaney’s iconic portrayal of the Phantom is most assuredly definitive, despite contextually melodramatic hand-wringing and repetitive flinging of the arms to suggest woe and anguish, and the look of the Phantom himself hasn’t been bettered even now. Viewed with modern eyes, it’s laughably overwrought, hammily acted and incredibly stilted in most aspects, but when you review a film like this you have to accept the period in which it was created and value it as a work of period artistry. For that, The Phantom Of The Opera is a startlingly effective chiller, containing moments of abject horror and sublime directorial vibrancy.