Disaster films, by their very nature, are often patently ridiculous. From meteors, earthquakes and alien invasions, to geostorms, tidal waves, twisters and volcanic eruptions, the disaster epic has been a staple of Hollywood fare since practically forever, and all of them expects us to hold our disbelief and simply get on and enjoy the ride. Usually, these films contain generic or stock characters, simplistic plots and focus heavily on impressive visual effects – practical or digital – and are designed as amusement park rides asking little of our intellect and plenty of our fun centres. Krakatoa, East of Java, is a film asking much of its audience, having to overcome strangely inept tone and an inability to decide if it wants to be a serious blockbuster or a daffy, family-friendly escapade. Impressive 1960’s practical effects involving the titular volcanic eruption are well staged, yet the pacing is plodding, the characters impenetrable and the factual errors undermine any sense of historical accuracy. 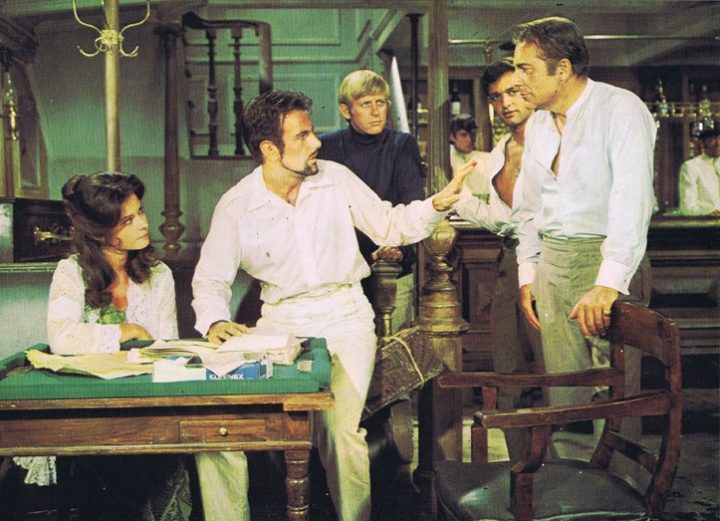 1883, the volcanic Indonesian island of Krakatoa is starting to erupt, scaring local inhabitants. In the nearby port town of Anjer, ship captain Chris Hanson (Maximilian Schell – Deep  Impact) gathers a rag-tag crew on his vessel, the Batavia Queen, to hunt for a sunken wreck containing a fortune in pearls. Along for the ride is Hanson’s mistress Laura Travis (Diane Baker – The Diary of Anne Frank), diving bell designer Douglas Rigby (John Leyton – The Great Escape), deep-sea diver Harry Connerly (Brian Keith – The Parent Trap) and his companion Charlie Adams (Barbara Werle), as well as hot air balloon operator Giovanni Borghese (Rossano Brazzi) and his son Leoncavallo (Sal Mineo – Rebel Without A Cause). Setting out on their quest, the natural phenomena caused by Krakatoa’s impending eruption bring fear and tension aboard the ship, while Connerly’s addiction to laudanum, thanks to a crippling lung issue, has the entire passenger compliment – including several dozen prisoners travelling on Government orders – on edge.

Krakatoa, East Of Java has multiple problems. The fact that the island of Krakatoa is actually west of Java makes the very title of the film erroneous, although the producers decided that “East of Java” sounded more exotic and left it alone. Geographical anomalies within the film’s narrative aren’t the most egregious issue for the viewer, however; instead, it’s an insistent decision to turn what should have been an exciting adventure story into a vaguely melodramatic soap opera, complete with an extended hallucinatory sequence involving Brian Keith’s drug-addled diver character, and inexplicably tortured female roles rounding out a hodge-podge of tonally jarring elements to this movie. The film even contains musical numbers, including a first act strip-tease that’s totally at odds with the film’s core premise of excitement and fun.

Written by blacklisted screenwriter Bernard Gordon, the film peppers its cast with ubiquitously greedy, nonchalant, innocent participants of a variety of motives, all of whom are interchangeable with any blockbuster event film roster. According to the film’s production notes, the producers filmed all the volcanic special effects first, and then constructed a story around them to suit; not the normal way of making a movie, I agree, but a unique one nonetheless. Indeed, the visual effects are splendid for their day, even if somewhat dated now, with the film picking up an Oscar nomination in this category. Director Bernard Kowalski derives some measure of conviction from his cast, and the film’s extensive trick photography and rear-projection use becomes problematic for modern eyes used to slick CG effects, but clever use of different angles, models, and convincing performances from all  involved (despite the silliness of it all) allow us to thrill at what must have been a surely terrifying global event.

One of the key aspects to Krakatoa, East of Java that enticed me to watch it was its use of Cinerama, a widescreen 70mm format designed to really draw the viewer into the movie. At times, Krakatoa looks positively beautiful, the rich, crisp imagery and Kowalski’s excellent widescreen framing often breathtaking. The production design on the film’s sets, notably the Batavia Queen’s various rooms and decks, as well as the lush Indonesian landscapes, are exquisitely rendered, and the cinematography is of an especially high quality. It’s a shame the film’s tumbleweed emotional content can’t match it. The score, by noted Hollywood composer DeVol, matches the on-screen action and is really rather good (I’m not generally a huge fan of that overly soppy soundtrack design of the 1960’s, and this film is the personification of that, so me saying it’s good is something you should make plenty of), while at the other end of the spectrum, the film’s editing and lengthy sidebar subplots grind things to a halt too often to salvage.

Krakatoa, East Of Java’s “torn from the pages of history” selling point works well enough – the visual effects are handsomely mounted and engaging for their time – but the indifferent characters and sodden pacing makes the film a real slog to get through. Weird tonal shifts and clumsy musical interjection at times threaten to overwhelm the film’s core motivation, and although there’s a lot here for fans of the disaster genre to enjoy or ruminate on, unfortunately the film’s slip-shod style and piecemeal script will put most others off. Worth a look for connoisseurs only.