The remorseful assassin trope becomes John Woo’s all-time action masterpiece: The Killer is perhaps the highest of high bars for Woo’s Hong Kong output (he moved across to the US in 1993, only a few years after The Killer landed) and remains my personal favourite of all his films, as well as that of Chow Yun-fat, whose considerable status as an action star in his homeland failed utterly to translate into the same in Hollywood, no matter how hard Hollywood tried. The Killer’s kinetic, hyperbolic epic-ness cannot be overstated, nor can its charming dramatic narrative, and the final showdown gun-battle between Yun-fat and co-star Danny Lee has to be seen to be believed. If you aren’t a fan of Hong Kong action films, then allow The Killer to change your mind. 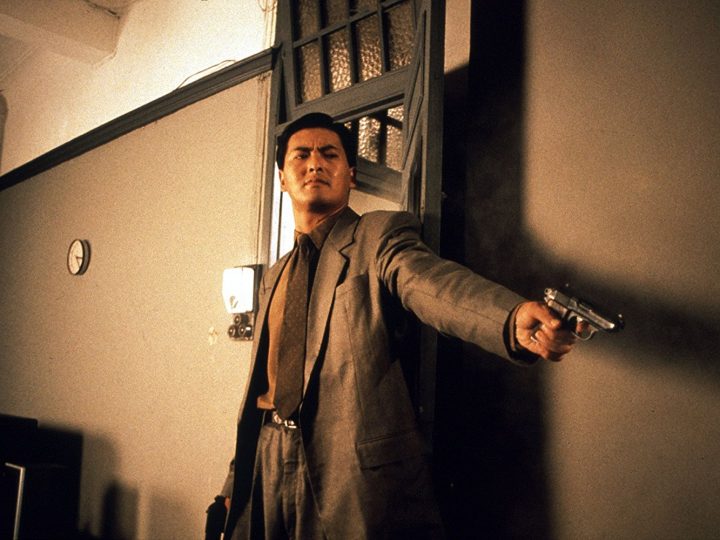 On the streets of Hong Kong, hired assassin Ah Jong (Chow Yun-Fat) accidentally blinds an attractive lounge singer, Jennie (Sally Yeh) during a shootout. Beset with remorse, he takes on one last job for double-crossing Triad boss Hai Wong Hoi (Shing Fui-on) to pay for her eye surgery, which brings him into direct conflict with Detective Li Ying (Danny Lee), who hopes to arrest Ah Jong and bring down the criminal underworld.

For the longest time I had a fantasy about this movie. At the time it lobbed onto the video store rental shelf – it was rated R here in Australia, as hard a rating as you could get without being actual pornography – it appeared more as a curiosity than something I might find entertaining. The VHS tape’s cover screamed bloody murder of a kind most heinous, and although the names John Woo and Chow Yun-Fat were entirely foreign to me (at the time), I figured at some point I’d wander up to the counter with it in my hands, slap it down, and rent the damn thing. Then one day I did, and my young life was forever changed. The Killer is a flat-out action masterpiece, tapping into a nascent love of the genre and hitting all the right pleasure centres with its over-the-top balletic sequences of gunplay and Woo’s patented Mexican Standoff motif. Also, doves. Because who doesn’t love doves. 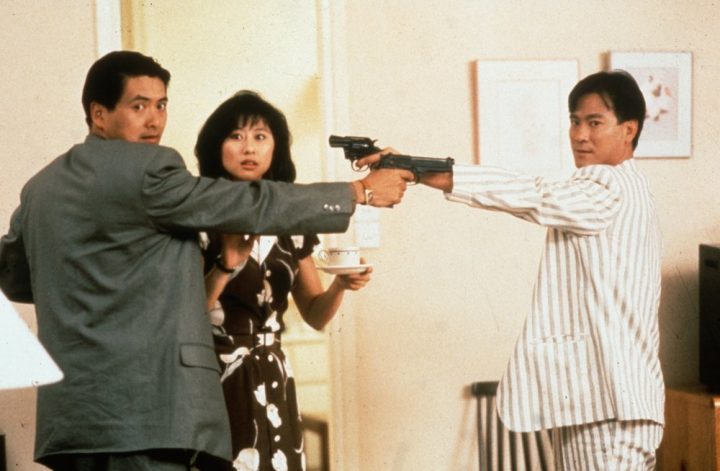 Doves have played a significant part in Woo’s cinematic identity, starting with the iconic church shootout concluding this film, and winding its way through the majority of his output since – notably, Face/Off and Broken Arrow – although he’s tempered that somewhat since returning the China. The Killer is incredibly cliched by today’s standards, understanding that Woo established a lot of these cliches and brought them to the attention of Western audiences. The whole “flying through the air shooting two guns” routine name-checked in Hot Fuzz? All Woo. The slo-mo, soft-rock gun battle between the hero and the villain? Woo was there. Back-to-back team-up spinny stuff? Woo’s the man. The assassin with a conscience? Woo may not have invented it, but he transformed it into the noble trope it is today. And the dove motif central to Woo’s most visually dynamic films have become his calling card, often imitated but rarely bettered. 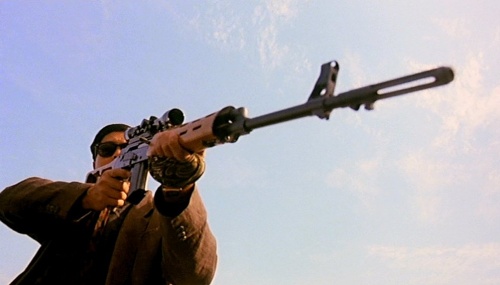 In The Killer, his mastery of the action genre was full fledged, with lead actors Chow Yun-Fat and Danny Lee playing into type as opposite sides of the same coin. Yun-Fat, as An Jong (known colloquially as Mickey Mouse in the dubbed version, available in some markets), is charismatic, charming and effortlessly watchable, his tortured character a perfect fit for the actor’s range of emotion. Lee, meanwhile, plays the stoic, dedicated Hong Kong cop with all the po-faced expectation the role offers, while female lead Sally Yeh is all innocent and soft-focused as this sub-genre expects. The emotional range of the three central leads are deftly interwoven into the ramshackle plot and its pacing, and the film’s occasionally silly swerving around believability is overcome thanks to some smart character beats sold on the strength of the acting. 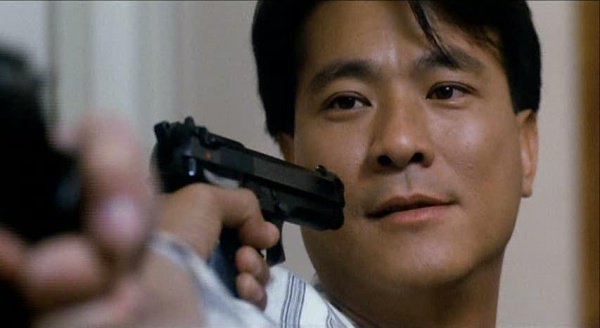 But you’re not here for the drama, you’re here for the balls-out action, and boy howdy does The Killer deliver. Although the film looks comparatively cheap in terms of film stock and production value (remember, this is Hong Kong cinema circa the late 80’s, not some post-millennial hyper-kinetic Joel Silver production) Woo elicits all kinds of excitement and gleeful cheesiness with his direction. The film was marketed in some areas as having “the highest body count in film history” and so of course was a major drawcard for me the first time I saw it, and the casual violence exhibited therein will satisfy even the most frigid action film junkie. The use of practical squibs in achieving the insane shoot-em-up kill sequences is starkly effective compared to today’s digitally enhanced brutalism, and the constant overkill in the gun battles will have you guffawing just a bit. Seriously, you only really need one or two bullets per henchman, but Woo decides to empty an entire magazine’s worth of bullets into the steady stream of henchmen to come into frame. Yun-Fat dispatches all manner of lowly low-lifes with relative ease, his guns apparently never ever running empty of bullets as he carves a swathe through the Hong Kong criminal underworld. 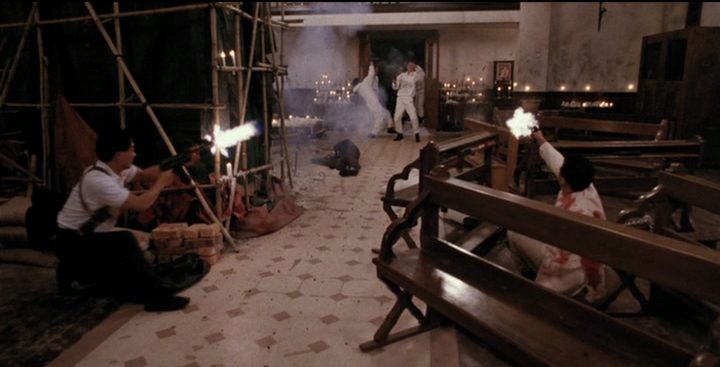 Obviously, the most memorable sequence in the entire film is an enormous church shootout, filled with candles and Woo’s doves (I wonder, how many doves would be slaughtered in such a bullet-heavy sequence in real life?) as our combatants embark on a hell of a glorious shooting spree. It’s a cascade of blood and death mixed with honour and skewed motivations, trademark Woo flourishes and way over the top hyperbolic style. It would amount to nothing were it not for the preceding 90 minutes of build up, opening with a glorious restaurant shootout, an riverbound assassination, several close-call encounters between Yun-Fat and Lee, before the climactic religious catharsis. 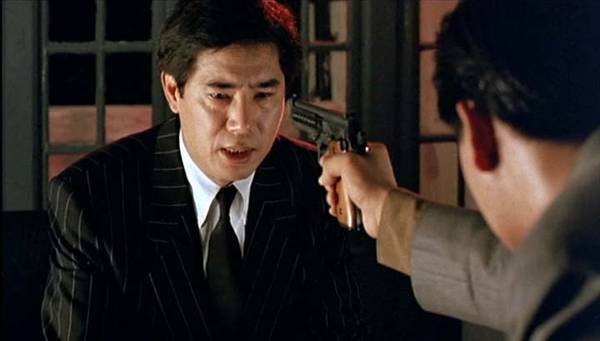 Although Woo himself is a Christian, he has claimed The Killer isn’t a “religious” film in any sense, something I scoff at considering many of the thematic elements within. The redemptive cliches inherent in Woo’s screenplay aren’t exactly subtle – early in the film, Ah Jong has bullets removed from his back inside a church, with continued reference to the cross indicating a messianic arc or test of faith subplot, and many of the character’s conflicted feelings towards his chosen profession are established as biblical echoes in many ways. Thematic prevalence towards faith aside, The Killer rockets along without much care for your intellectual stimulus, when it exists almost purely as an exercise in hugely improbably action fantasy.

Violent, kinetic to a fault, filmed with panache and Woo’s trademark excess, The Killer is hyperactive 80’s Asian cinema at its goddam finest. It’s pulp action cinema, a template film that not only redefined action cinema but launched a thousand copycat efforts and sparked a huge interest in Hong Kong talent (including that of producer Tsui Hark, himself a noted filmmaker who would venture over to America to make a duo of Van Damme films, Double Team and Knock Off, among others) of the day. The Killer is spectacularly over-the-top, deliriously cheesy and vigorously violent, an outright classic from Woo and a first class trope-filled masterpiece.