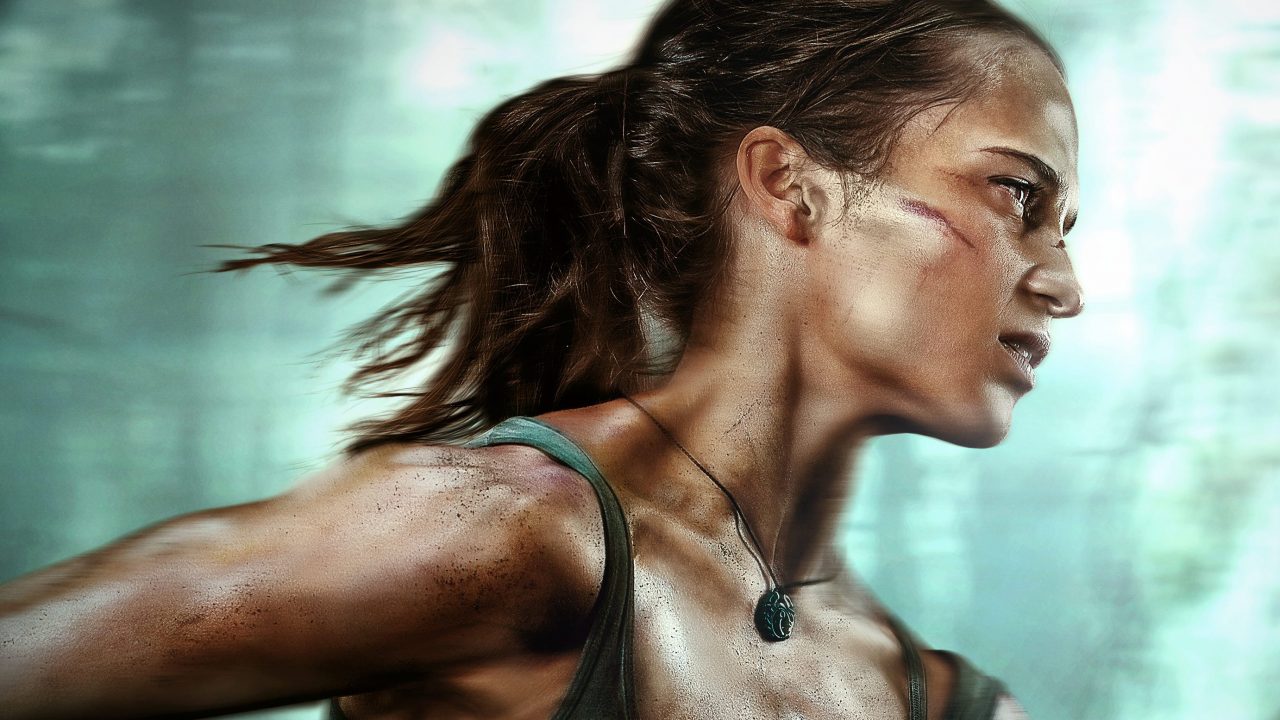 As a non-gamer, the concept of Lara Croft as a character was utterly foreign to me back in 2001 when Angeline Jolie swung into action as the popular video game heroine. Essentially a modern, female Indiana Jones, Jolie’s Lara Croft has the haughty foreknowledge of education whilst the financial backing to engage in such enterprises as… well, raiding tombs. The video game series has always been popular, although obviously not enough to warrant more than one sequel to Jolie’s adventures – until now, that is. Norwegian director Roar Uthaug (The Wave, The Quake) thrusts Oscar-winning actress Alicia Vikander (The Danish Girl, Tulip Fever, Ex Machina) into Lara’s singlet and shorts in this reboot origin story, and tasks her with engaging in an emotional arc to contrast against the physics-defying action heroics a screenplay in this world must deliver. 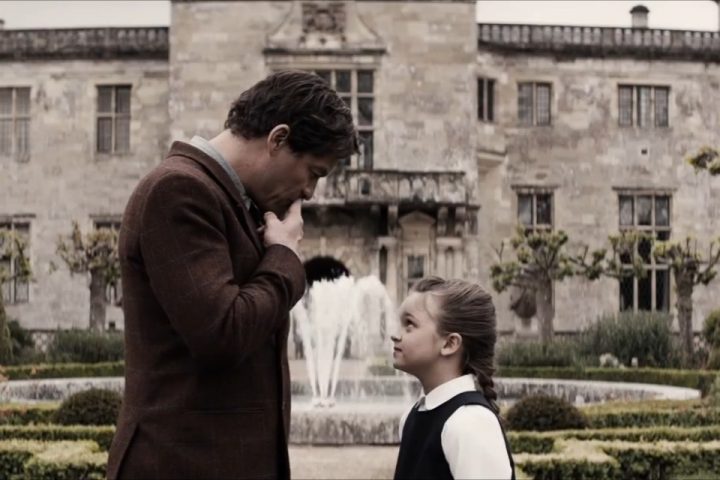 Lara Croft (Vikander) is a young British woman living tough; she has little money, delivers food as a bicycle courier, and in her spare time spars in a local gym. Her father, Lord Richard Croft (Dominic West – Chicago, Punisher: War Zone), a wealthy businessman, left on an expedition 7 years prior and never returned, leaving his empire in the hands of trusted partners Anna Miller (Kristen Scott Thomas – Four Weddings & A Funeral) and Mr Yaffe (Derek Jacobi – Anonymous, Murder On The Orient Express). Lara has tried to distance herself from her inheritance, due to the painful memories it brings up, however she stumbles upon a clue that could lead her to locate her father’s whereabouts: a distant island off the coast of Japan, rumoured to be the resting place of an ancient cursed myth, Hiriku. She hires Hong Kong sailor Lu Ren (Daniel Wu – Europa Report, Geostorm) to take her to the island, before becoming shipwrecked and captured by ruthless mercenary Mathias Vogel (Walton Goggins – The Hateful Eight), who works for a competing expedition known as Trinity. 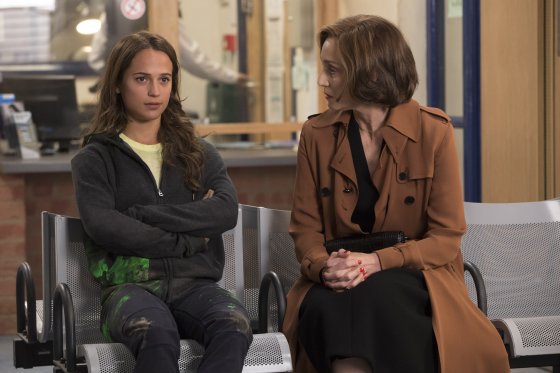 Tomb Raider is a film that pretty quickly sells itself on high octane thrills and slam-bang adventure. After all, it’s a “video game move” entry, and if we’re all honest with ourselves that subgenre hasn’t fared well in… well, ever really. There’s only a few really good ones, and a whole bag of bad. Tomb Raider steers away from being bad simply through sheer force of will; Roar Uthaug’s direction is the very definition of crowd-pleasing, throwing pulse-pounding action and wry humour between Walton Goggins’ withering antagonism, and the film’s dynamite score and thunderous sound mix will at the very least keep you awake throughout. Obviously, a film with this kind of title and expectation isn’t going to have a particularly deep story, or characters of well-rounded and complexity to evolve with, but the screenplay by Geneva Robertson-Dworet and Alastair Siddons somehow manages to make us feel an attachment to the bond between Lara and her oft-missing daddy through Vikander’s commitment to the role. The film doesn’t dwell on the premise so much as it does the characters, managing to make us care for our heroes moreso than any film of this kind to-date. The tomb raiding itself seems to take second place, which isn’t so much a problem as it is a refreshing change. 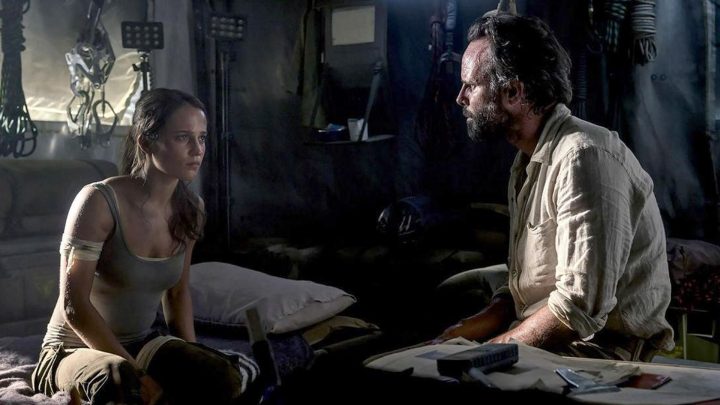 Whereas Angelina’s take on Lara Croft was ripped directly from the game (including extraordinary enhancements to her breasts to make them bigger), Vikander’s lithe, muscular variant is more suited to our gritty, extreme-sports world and sits comfortably into this classification of screen hero. She may be tiny, but Vikander is utterly ripped as Lara, more than handling herself against the copious male co-stars she must combat throughout. The role also demands a depth of emotion that Vikander essays easily, and by the end credits any comparative thoughts between this film and Simon West’s 2001 venture evaporate. It’s a take-no-shit kind of film, a rock ’em, sock ’em gangbuster flick that delivers its share of tombs, ancient ruins, chases and fight sequences. Vikander owns the role, and I can’t wait to see her reprise the part.

Supporting Vikander on-screen is the always dependable Dominic West, who plays her gruff yet kind father, an endearing absentee parent who’d rather go on adventures than stay home with his little girl. Their attachment is so strong one wonders why he ever left in the first place… Anyway, West is more than capable of playing a role once assumed by Jon Voight, only here he’s more fleshed out and, if I’m honest, better. Walton Goggins plays resident bad guy Vogel, who’s quick with island justice at the end of a gun and as slimy as they come. Daniel Wu has a role as Lu Ren, who find himself caught up in Lara’s adventures and becomes her friend and ally, while quick cameo roles to Kristen Scott-Thomas, Nick Frost, Derek Jacobi and Jaimie Winstone flesh out the humour and intrigue to Tomb Raider’s narrative. 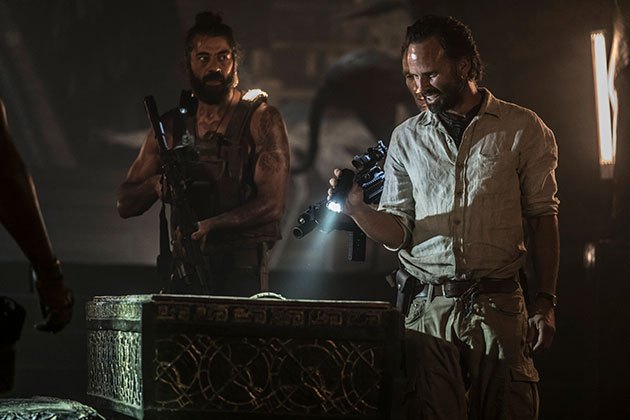 As you’d expect, Tomb Raider must showcase several dynamite set-pieces to bring in the crowds. The film contains several, and to a tee Uthaug lands the punches as often and with as much vigour as he’s able. A bigger budget here than he had in The Wave allows him to maximise the big screen-ness of the show, as explosions, gunfire and spooky supernatural themes plunge us into a world of adventure that’d make Bear Grylls squeamish. Lara plunges into raging torrents, clambers through rusted aircraft, slides, slips, climbs and throws herself across chasms and ladders and collapsing burial sites with nonchalance, accompanied by Junkie XL’s pounding soundtrack and some sublime editing. A few of the visual effects look a touch ropey, but there’s a carefree sense of enthusiasm at play here you can’t help but be caught up in it all.

I had a blast with Tomb Raider, it must be said. Sure, it’s not the smartest film, but for the genre in which it’s operating things work exceptionally well. The “mystery” within the story is easily solved (at least by me), the acting is suitably arch, and the direction is pitch-perfect blockbusterism of the first order. A blast of spills and thrills, Tomb Raider’s return to the big screen is again accompanied by an Academy Award-winning actress and delivers rousing, engaging fun without stretching the brain too far or the bladder too much. Heaps of fun!