Synopsis: A man is shipwrecked on a deserted island and encounters a red turtle, which changes his life.

Haunting, quiet, melancholy, yet altogether electrifying, The Red Turtle is a near-silent animated film from Dutch director Michael Dudok de Wit (Academy Award-winning helmer of the animated short Father & Daughter) that will utterly transfix you as it captures your heart. Magical in every respect, from its sublime animation to the glorious natural landscapes and the fantastical subject matter, the film is a rumination on themes as broad-scope as you can imagine while remaining intimate at an almost primal level. 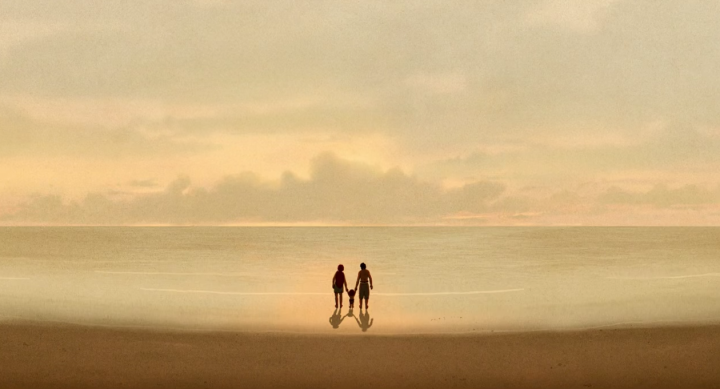 The film contains no spoken dialogue save several instances of a shouted “hey” from time to time. A man is washed up on a deserted island, where his attempts to escape are thwarted by the “attacks” of a giant red sea turtle, which destroys each of the man’s bamboo rafts. The turtle comes up onto the beach at one point, where he is attacked and seemingly killed by the man – later, the turtle transforms into a beautiful woman, and the pair become a couple. As the years wear on and the couple produce a son, a natural disaster will crystallise just how precarious their idyllic and isolated life really is. 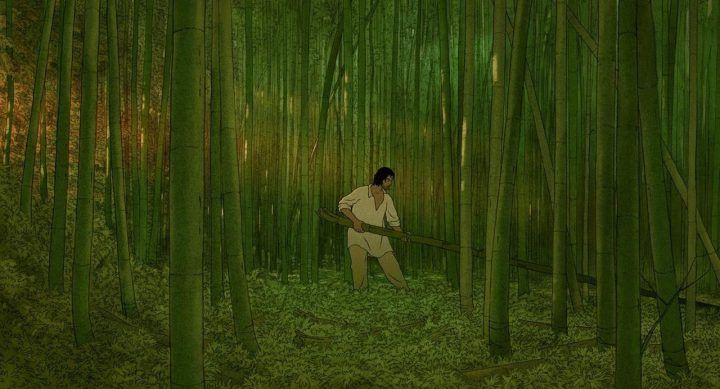 Produced by animation giant Studio Ghibli together with distribution company Wild Bunch (who gave us The Kings Speech and The Artist, among others), The Red Turtle is a transformative film that asks the viewer to engage with its story in ways Pixar and Disney have yet to achieve. The film’s lack of a spoken word means its unique in its universality, a film in which the man could represent literally anyone, and the overarching story of isolation, communication and eventually love and partnership results in a story that, while weirdly creepy if you think about it, sparkles with the sensibility of a storyteller attuned to the fantastic. I’m unsure if the man-and-turtle relationship aesthetic was something riffed on by Guillermo del Toro’s The Shape of Water, because that aspect of the fable here is bizarre, but if you believe in magic and the film’s subtext of isolation then there’s a sweet little arc here to savour. 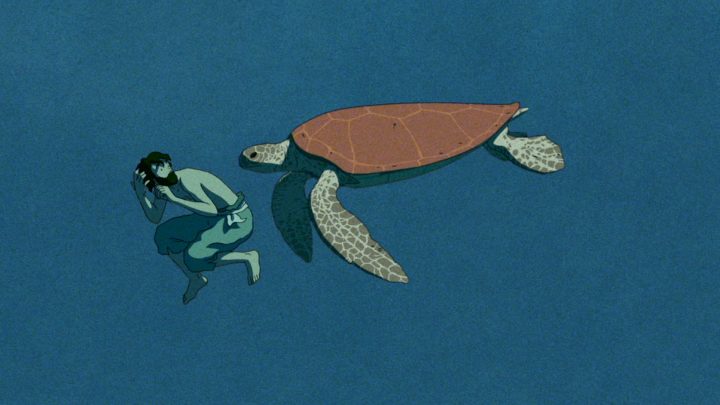 In many ways, The Red Turtle echoes classic films of the silent era; if you were to watch this with the sound off, the film’s impact would be lessened not a jot, for it’s a story told almost entirely through its visuals. And what delicious, astounding visuals they are. Almost every frame of this film is a masterpiece of colour, tone, crisp lines and naturalistic animated style, offering the wild and calm sea surrounding the island while giving us the rocks, sand and bamboo jungle within. Bursting with colour, offering moments of blissful monochrome and desaturated hues representative of both the mood and setting (nighttime, for example, is often greyish white or soft blue), The Red Turtle’s dynamic style transports you to a place you often think you could reach out and touch. Clothing and hair animation in particular feels almost rotoscoped like the old Ralph Bakshi Lord Of The Rings style, and the use of effects to give the sea its primeval organic-ness are startling. 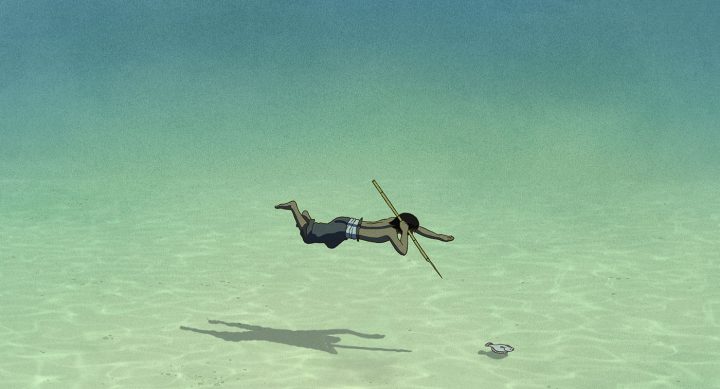 While it is absent meaningful dialogue, the film wants not for connection with its audience. Moments of humour, derived mainly through the man’s interactions with the island’s local crab wildlife, are interspersed with a sense of loneliness and desolation, not unlike Tom Hanks’ character in Robert Zemeckis’ Cast Away, although here Wilson is replaced with the titular turtle as the object of his attention. When the turtle transforms into the man’s eventual life partner, the film takes a strange turn – perhaps this is some kind of cultural myth I’m unaware of – but it’s handled with grace and a sense of playful delicacy. If you’re ready to go with it, the film will transfix you. The man’s journey through the film, from his initial attempts to escape to his sense of resigned acceptance at having to stay, is dignified and naturalistic, as is the relationship with his wife and their young child. The human dynamic is revealed through action rather than word, a universal truth to behaviour that works without any need for language. It’s a surprising and exceptional presentation. 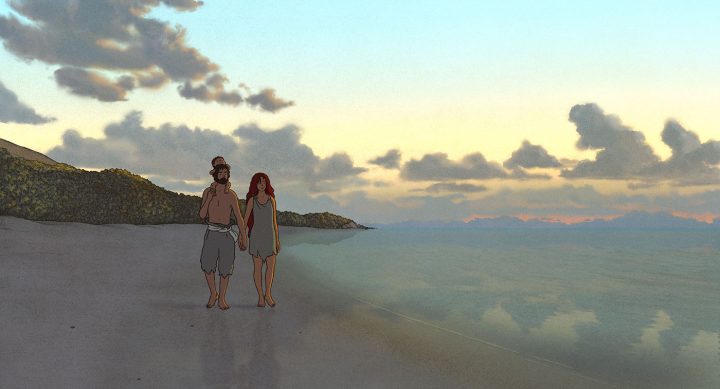 I cannot speak highly enough of The Red Turtle. It’s a film of great heart, sadness, joy and terror. It’s a film built on quiet, a film strengthened by its attention to isolation and the gradual, slow build up of these characters into people we empathise with and form attachments to. Nigh perfect in almost every aspect, The Red Turtle is a remarkable animated project that deservedly snagged an Oscar nomination in the animated genre. As an alternative to the often cookie-cutter product churned out by Hollywood, this film is a revelation. Flat out, without doubt, a masterpiece.