Netflix’ acquisition of David Bruckner’s The Ritual bolstered the streaming service’s horror stocks considerably – Open House was silly but enjoyable, while Steven King outings like Gerald’s Game and 1922 remain strong critical darlings – proving there’s life in the old genre yet. Horror films tend to thrive on repetition, like any good ghost story, and The Ritual works its tentacles into the nerve centre of our brains by tapping into something primordial, something unknown, in a manner that feels like it ought to seem rote but somehow retains a freshness many films of its ilk never achieve.

After the brutal death of their friend in a convenience store robbery, four college buddies reunite to trek a trail through the Swedish landscape and reforge their friendships. However, after encountering a bizarre site of what appears to be pagan sacrifice and worship, Luke (Rafe Spall), Phil (Arsher Ali), Hutch (Robert James-Collier) and Dom (Sam Troughton) find themselves pursued by a malevolent entity in the forest, an entity intent on hunting them down and killing them. The group’s inbuilt tensions rise to the surface when Luke’s cowardice is called into question and mysterious things start to happen to them, precipitating further terror from the four men. 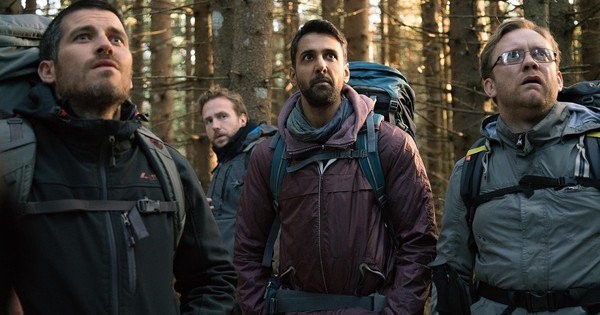 Drenched in atmosphere and rippling with an undercurrent of fraternal tension, The Ritual reeks with style and carefully orchestrated thrills. The character dynamic between the four central characters is obnoxiously “horror cliche” up the wazoo (accompanied by a load of profanity, in true British style), but the manner in which Bruckner’s canny direction handles them ensures they’re likeable without being twee. Rafe Spall’s Luke has the core of the film’s emotional weight, since it’s he who was witness to their friends murder (a briefly seen Paul Reid) and who feels incredible guilt over the fact. Is The Ritual a film about redemption? Not quite, but the film’s eloquence with gradated friction engenders a sense of redemptive catharsis. 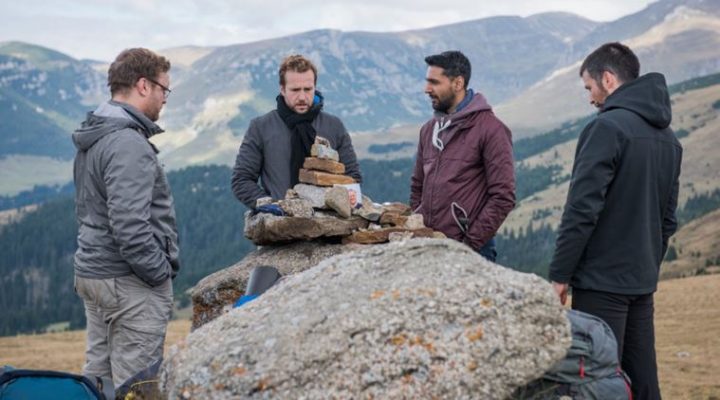 Joe Barton’s screenplay is razor sharp but undemanding, dropping us into the premise of the film with barely a pause for the bloody preamble’s gasping horror, as the four nameless dudes begin their hike through the Scandanavian wilderness. Honestly, none of the men in this film are particularly memorable other than cursory expectation of the genre’s tics and tricks, no matter how well they’re acted, but the film’s focus isn’t so much on them as people as much as it is them being fodder for…. whatever lurks in the creepy forest they venture into. Like Red Riding Hood, there’s a big bad wolf at play here (figuratively speaking) and in much the same way as that fairy story’s heroine isn’t gifted with a particularly rich vein of character, neither are Luke, Phil, Hutch or Dom. 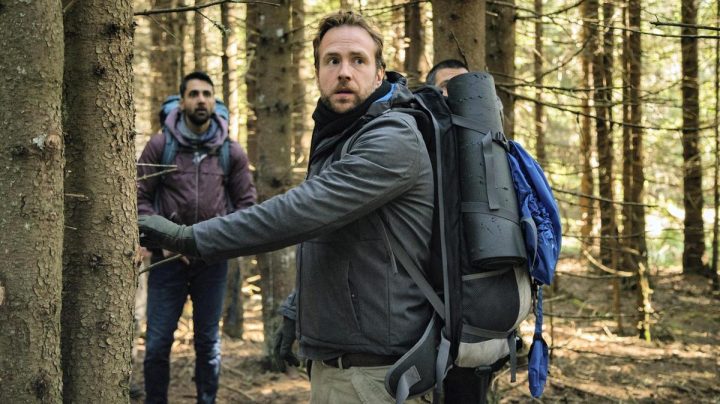 Instead, The Ritual hones in on atmosphere and style, and it’s here thinks pick up markedly. Bruckner’s strong direction visually is accented by the terrific locations he utilises in bringing the film to life, the textured layers of the forest, the soaring peaks of the Swedish hinterland, the jet-black blood and viscera of the film’s more traditionally horror-flavoured second half all giving weight to the otherwise bland characters, counterbalancing the film’s shallow emotional heft with a remarkable acuity. There’s a terrific sense of isolation to the film, very much in the vein of The Blair Witch Project, although blessedly lacking that “found footage” amateurishness.

Bruckner’s film is a tour de force of stylistic flourishes, from the exquisite sound mix to Andrew Shulkind’s crisp cinematography and Mark Towns’ fingernail-shredding editing, and there would be few among us who aren’t at least ending this thing with jangled nerves, if not quite the stimulated intellect we hoped. The film is shrouded in darkness at times, an omnipresent drabness layering both the characters and their location that enhances the moments of terror. The growling, animalistic nightmare accompanying the men into the woods, into a distinctly haunted cabin in the dark, and through the terrifying escape from said woods, all magnified through a lens of steady, ratcheting chills and scabrous audio mixing. I had flashbacks of Neil Marshall’s Dog Soldiers somewhere in here, the visceral frisson of Shyamalan’s The Village mixed with recent woodsian genre gem The Witch. Truly, there are moments in The Ritual that are among the best scary moments in recent memory, and with Bruckner’s refusal to shortchange the viewer with his visual flair, he’s crafted a memorably evocative piece that lingers in the mind’s eye. 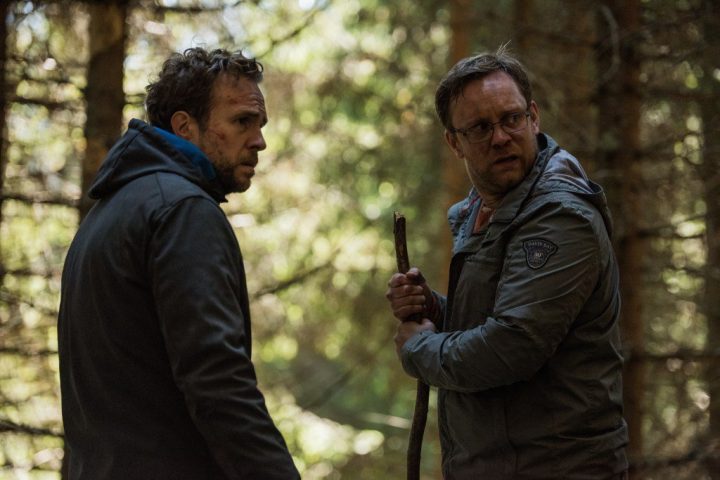 Horror films tend to thrive on repetition: the audience’s familiarity with genre tropes can actually work in a film’s favour if it plays to a story’s strengths well. The four leads provide serviceable work in their respective roles, with Rafe Spall and Sam Troughton providing the best of the quartet’s audience empathy, and the wonderful location filming providing a rich and varied tapestry of obstacles for our heroes to overcome – if they can. The Ritual is a spine-tingling adventure into man’s wilderness, and although its final act does get a touch silly, there’s style to burn and a decent little time giving this genre piece a watch.