Braven is, sadly, a film of indifference. Indifference to the audience, indifference to the cast, and indifferent to cinema. Justice League and Aquaman star Jason Momoa headlines this purported snowbound action thriller that lacks almost any thrill whatsoever, and features a second-rate quota of “action” amidst people running through the Canadian landscape with guns and axes. The premise, a logger stuck in a mountainside log cabin beset by gun-toting drug dealers doesn’t stretch the intellect or freshen up the action genre in any sense, leaving much of the film’s heavy lifting to be achieved by characters so forlorn and ill-conceived it’s a wonder Momoa dropped his production label onto this. If he’s trying to emulate Dwayne Johnson’s pop-culture savvy persona and become the next big Action Star, Braven is a trip in the opposite direction and, to put it mildly, does Momoa more harm than good.

Logger Joe Braven (Momoa) lives with his wife Stephanie (Jill Wagner) and daughter Charlotte (Sasha Rossof) in a Canadian town with his father Linden (Stephen Lang), the latter of whom is beginning to exhibit signs of confused mental state due to an accident a year prior. Escaping to his wood cabin retreat up on the mountain, Joe and Linden stumble upon a stash of drugs hidden there for collection by ruthless drug-runner Kassen (Garrett Dillahunt). Kassen and his men attack the cabin when they realise Joe is there – the stakes rise when it is revealed Charlotte has stowed away and is right in harm’s way. With his family’s safety on the line, Joe attempts to prevent Kassen and his men from getting the drugs and save the day. 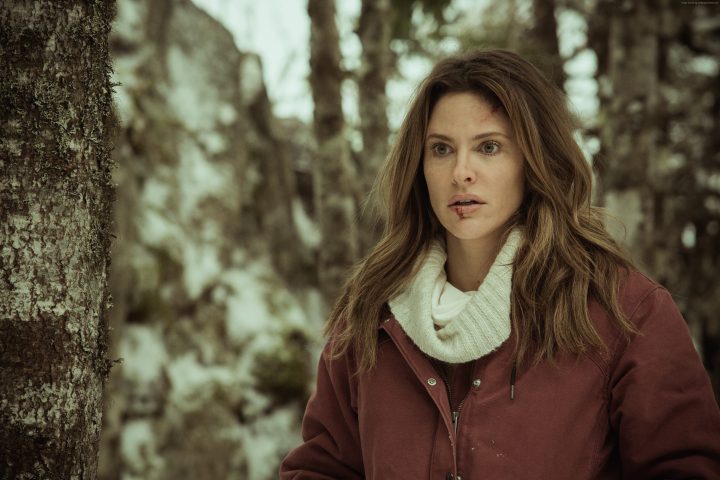 I’m in the (apparent) minority of people who don’t really rate Jason Momoa as a huge star, or a huge star in the making. His turn on Game Of Thrones was memorable but nearly a decade ago, his starring role in the Conan reboot left a sour taste in the mouth, and his co-starring role in Justice League was excellent, if saddled by iniquitous focus and poor editorial choices. Thus far, I’m yet to see a film in which I “get” his appeal – his physicality cannot be questioned, and in real life he seems a decent, genuinely good guy, but I haven’t ever bought one of his screen roles as anything more than just eye-candy with little depth. Braven isn’t about to rectify this; Momoa’s production company’s name is squarely on the opening credits to this thing so his involvement as star and producer indicates his passion for the script (written by Mike Nilon and Thomas Pa’a Sibbett) goes further than just a paycheck, if only the end result was a credit to all. 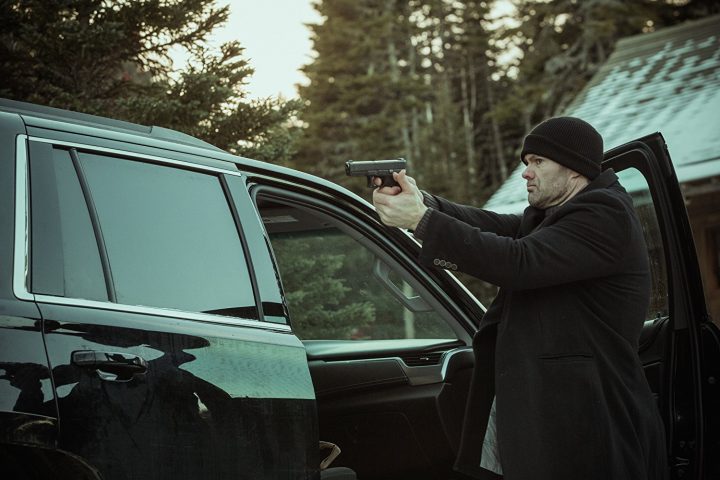 Whereas in Justice League Momoa grabbed some decent screen-time, laughs and his share of the slam-bang action, here the film buries his enormous frame and menacing physique beneath layers of snow clothing and furs, offering scabrous character growth as the eponymous Joe and offering little by way of convincing action. Joe Braven isn’t a particularly skillful dude in the manner of a Jason Bourne or Liam Neeson, and gets his ass handed to him on more than one occasion, but he is at least passionate about his family and that serves the film’s opening act quite well. Joe’s relationship with his deteriorating father – a solid but underserved Lang – is crucial to the film’s emotional resonance throughout much of the relatively brief 90 minutes we get with them, although the endgame for Linden and his PTSD isn’t a particularly exciting one. What Momoa loses in his inability to emote he gains with simplistic action beats that do little to mollify a viewer expecting… more. 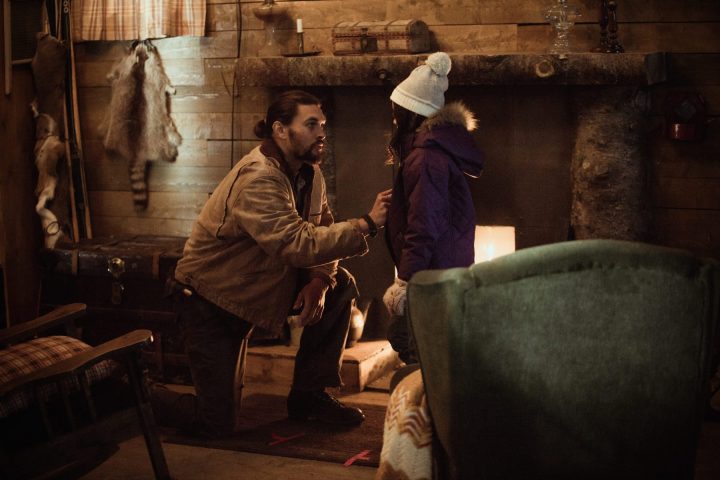 There are moments in Braven where the film looks and sound exquisite. Some of the photography, particularly in the slower, more moving moments, is truly excellent, and director Lin Oeding crafts an earthy, whispy-breathed tone that might have worked had the action carried more heft. Inexplicably, Oeding seems utterly averse to directing action with any kind of choreography or showmanship. Once Kassen and his men arrive at Joe’s cabin, and the tension starts to rise, the film’s camerawork, editing and sense of cinematic urgency evaporate in the crisp Canadian sunlight. From the plentiful gunfire and crafty use of machetes, bow-and-arrows and bear-traps (ha!), Braven seems anaemic as an action film. There’s an inordinate amount of time spent with people running through snow-covered forests and up mountainsides, perhaps indicative of the film’s relatively low budget, and hamstringing this lack of urgency even further is a character arc for Joe that simply decides not to exist beyond the film’s second half. What starts as a placid family drama and possible Cliffhanger-style chase through the wilderness turns into a generic, cliche-ridden slog with stupid kill scenes and even stupider Bad Guys. 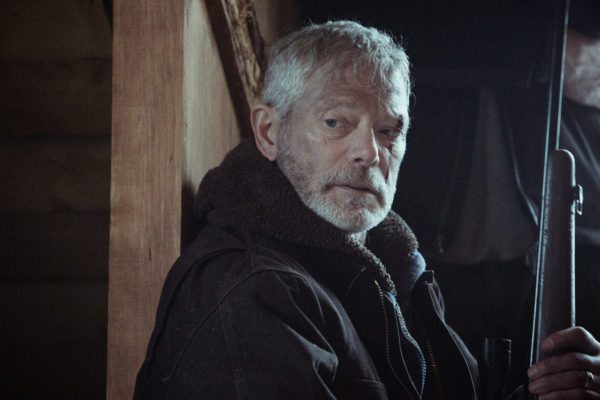 In some ways the film is a product of confusion. The opening act sets up the pieces and tries to give us some kind of emotional, empathetic “in” to the story and characters, and had they failed (which they do) if the film’s conclusion had brought the thrills and action I’d have let it pass. But failing in both character and action is a hard fail from me, and Braven’s rewatch value is nil across the board. It’s as if the film started off as one idea, and morphed in a writer’s room into another, and neither idea meshed well with the other. Momoa grunts through the film, Dillahunt makes a compelling villain, and Lang tries hard but is given nothing to work with. The young girl in the film, Sasha Rossof, is actually really good here, outshining her adult co-stars as the film’s only child performer, while a grab-bag of ancillary characters offer minimal work on the fringes here. 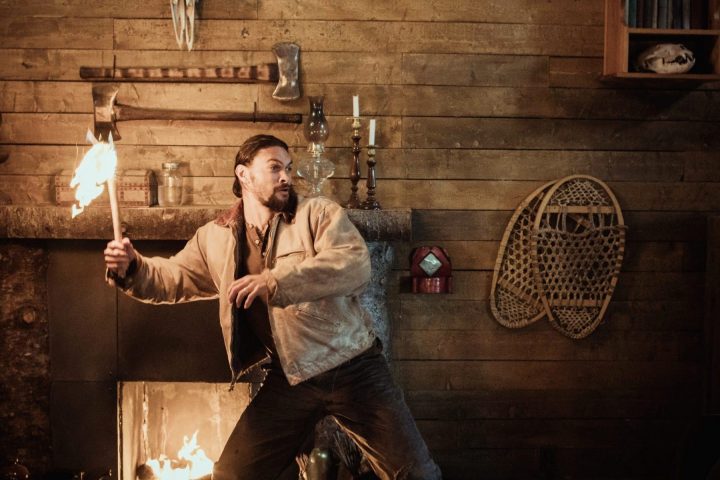 One imagines Braven the kind of film Bear Grylls might masturbate to; it’s filled with inventive ideas on surviving a drug cartel’s attack, from flaming axes and molotov cocktails, to archery through trees (remarkably precise archery, too) and even a sweet little cliff-fall with a quad bike. The trouble is the action is so ineffective, the execution so boring, that I honestly struggled to make it through to the end. Potential is missed utterly here: what could have been a Commando-level assault on a gang of bad guys ends up being a stoically realistic account of Jason Momoa’s Winter Wonderland, and that’s not something I wish to revisit soon.