As a relatively new player in the filmmaking game, Netflix appears to have become fertile ground for interesting, unqiue and low-key filmmakers to ply their trade. Nurturing new talent has paved the way for nice little gems such as Gerald’s Game, Okja, 1922 and Wheelman (as well as less-than-great Death Note) and The Open House proves the streaming studio is serious about top quality productions held in their stable. A decidedly productive little thriller, The Open House comes to us from the directorial talent behind B-movie slashers Mischief Night and The Funhouse Massacre, so the pedigree here isn’t particularly noteworthy, but the end result of Matt Angel and Suzanne Coote’s film – they wrote the screenplay as well as directed – is an effective low-budget fright-flick.

After the sudden and tragic death of his father (Aaron Abrams), young high-schooler Logan Wallace (Dylan Minnette – Goosebumps, Prisoners) and his grieving mother Naomi (Piercey Dalton) find refuge of sorts in an isolated house up in the mountains. The only stipulation to living in the house is that they have to vacate each Sunday for open house inspections, as the premises is due to be sold. Soon after they arrive, however, a series of increasingly unnerving events occurs, while encounters with elderly neighbour Martha (Patricia Bethune) and well-meaning sales clerk Chris (Sharif Arkins – Guardians of The Galaxy) only add to their sense of unease. Eventually, they come to realise that the house they’re in might not be the safe haven they thought – an intruder appears intent on making their lives a living hell. 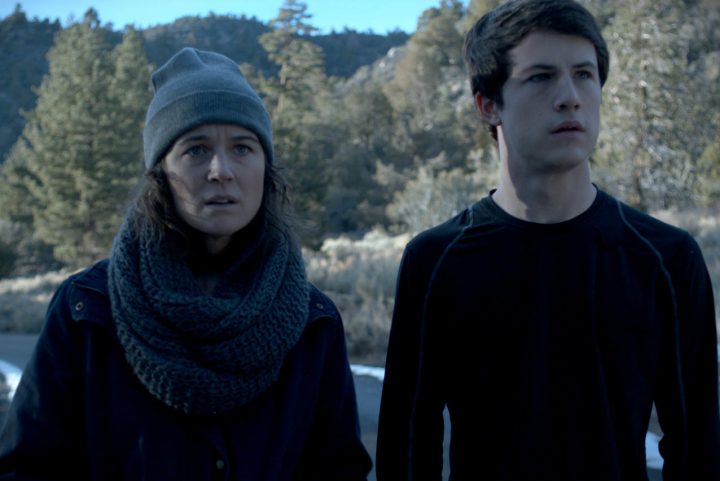 The balance between getting these kinds of films right and wrong is a very fine line. The Angel/Coote screenplay plays with genuinely predictable genre tropes, and the film contains an uncountable number of cinematic tricks we’ve seen before, and despite feeling like I ought to have hated this film for how I could kinda guess what was happening, I still found it enjoyable. Nutshell plot is a mother and son are tormented by a sadistic presence in the house they’re in. At its core, it’s similar to genre entries like The Strangers or You’re Next or Mike Flanagan’s Hush, isolation and inescapable terror giving rise to thrills for the the audience who know more than the characters in the film (we see The Open House’s creeper dude fairly early on, and the film isn’t exactly subtle about it being a horror), but through careful pacing and precise style, Matt Angel and Suzanne Coote give the film an emotional heft exceeding the simplistic conceit’s mandate.

The film’s strength really comes from the dynamic between Minnette’s Logan and Dalton’s Naomi, portraying a fractured relationship between son and mother as they deal with their grief. Logan’s angry-young-man character feels genuine, Minnette able to personify the inward-focused rage with ease, while Dalton manages the on-the-verge-of-tears mother routine in a way that heightens the drama. The writing between mother and son is crucial to the events later in the film, and the directors are obviously attuned to the idea that we need to get to know and empathise with the leading characters before we put them through the wringer. As the film begins to ramp up the scares, the directors’ lack of subtlety does become a touch silly, but the emotional connection remains strong. 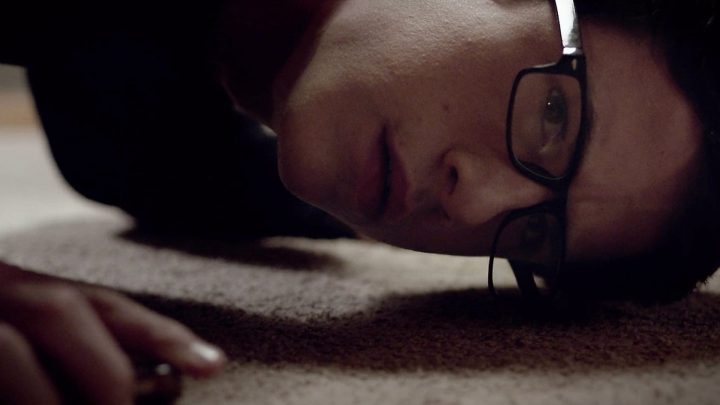 Critically, the film doesn’t offer many subtle cues for terror. The bombastic score is repetitively “thriller movie” generic – composer Joseph Shirley appears to have downloaded samples of better horror film scores and spliced them into a greatest hits track here – and the malevolent tones employed reduce our ability to be scared the longer things progress. It’s all sound and fury, this film, so those seeking more intelligent scares will be left wanting. That said, despite a dearth of fresh ideas here The Open House still remains effective for the most part, although elements of torture-porn gratuity will grate for those unwilling to endure the sound of snapping bone or tearing flesh. While the film’s cleverly set-up opening act caves in to routine and generic beats, I did have a great time wondering whether both or either Logan or Naomi would survive to the end.

It’s silly and predictable and all-too-obvious to really be a classic, and there’s contrivance up the wazoo that almost upends the film’s premise with WTF moments, but The Open House’s low-key scares and small-time effects aren’t a total waste. Minnette is solid, Dalton equally so (if not moreso) and the direction would be pretty decent if they’d chosen not to accompany all their chills and “moments” with an orchestral blast of music or foreshadowed jump-scare sound effects; The Open House is effective in and of itself but won’t require repeat viewings or achieve cult status, but is definitely worth catching.