Iconic comedic venture from the Monty Python lads doing their thing, this sketch comedy feature film links together the aspects of life from Birth to Death and everything in between (and even after) to produce one of their most memorable big-screen outings that blusters past the dull moments with wit and utter stupidity. Always bizarre and utterly off-the-wall, The Meaning of Life is a legitimate gem in British comedy and a film from which many, many memorable lines and sequences have spawned. 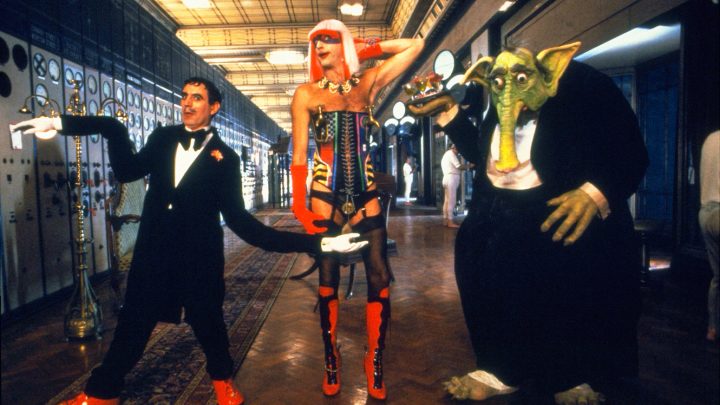 The fourth of the Monty Python theatrical films, following And Now For Something Completely Different, The Holy Grail and Life Of Brian, The Meaning Of Life saw the comedy troupe revisit sketch comedy rather than deliver a straightforward narrative, and for the most part the hits far outweigh the misses. Comedy being as subjective as it is, the Python boys are typically love-em-or-hate-em for most people, you can’t just sit down and watch one of their films in a lukewarm manner. Cult success has meant the three major films continue to receive iconic status, with (and this is just my opinion) The Meaning Of Life being by far the most quotable and approachable. 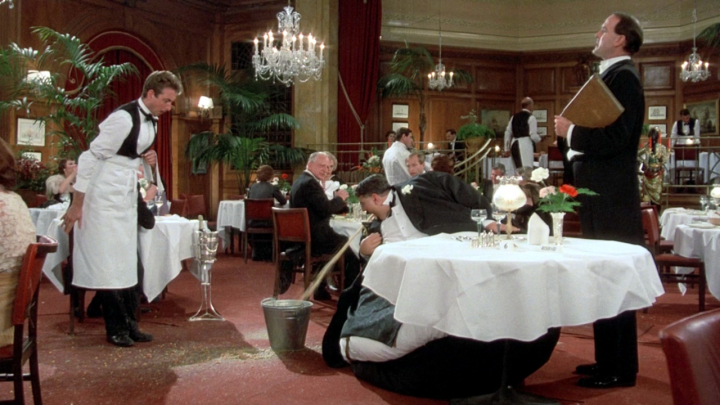 Vignettes within the film include memorable moments such as the large musical number involving a Roman Catholic father and his innumerable children singing about sperm, a scene in which a man participates in “live organ transplants”, the projectile vomiting restaurant guest who eventually explodes over fellow guests after gorging himself, and the incomparable Eric Idle’s spoken word song about the male sex organ. To say nothing of the films resplendent Vegas-style showstopping finale, in which a Tony Bennett lookalike sings about Heaven in such a manner that’s enough to convert any atheist. Throughout each scene, each of the major characters are played by the Python team, with the lion’s share of straight-up comedic work performed by the always brilliant John Cleese and Eric Idle, supported by Graham Chapman and Michael Palin, and featuring a number of moments in which Terry Jones and Terry Gilliam dress as women for a gag or two. Cleese’s classic scene in which he plays an old-school British teacher upbraiding his students whilst giving them an extremely frank sex education lesson will induce fits of giggles, while the utterly bizarre surrealist “Find The Fish” segment continues to baffle even the hardest of hard-core fans. 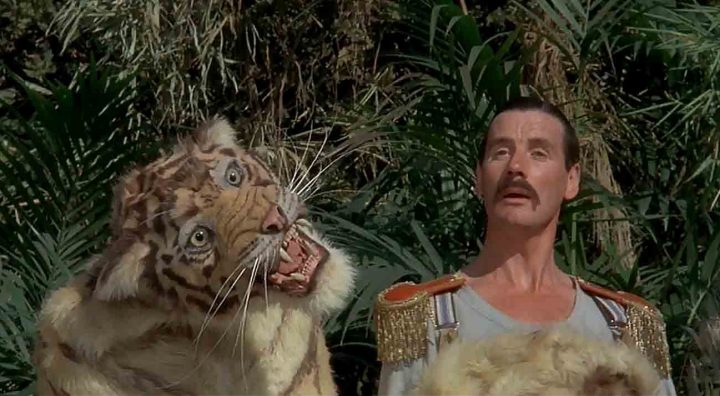 As the film progresses from Birth to Death, and the wry British humour continues to cause general mirth, you get the sense that there really is no sense in trying to make sense of this movie other than as a generalised diatribe on the stupidity of human existence – something Douglas Adams might very well agree with were he still alive today – and so approaching The Meaning Of Life as something deep or ponderable is asking too much from a group of comedy heroes in the nineteen eighties. For this Generation X-er, the Monty Python name was usually held in the same breath as their contemporaries, The Goodies and The Young Ones, all of whom were at the height of their respective powers about the same time as The Meaning Of Life arrived in cinemas. The halcyon days of the 1980’s for British comedy remains strong for most people my age, although I suspect as venerated anarchic comedy goes these films must seem rather tame compared to current screen heroes like Johnny Knoxville and whatever passes for talent on YouTube. 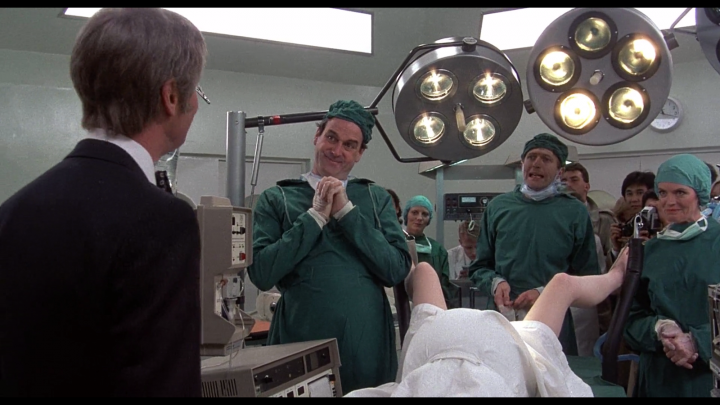 The film is held together thanks to the direction of Terry Jones, who able accommodates all the requisite beats of laughs in this film as he threads Terry Gilliam’s offbeat animations between the sequences, whilst the cinematography and production design on the film is generally pretty decent, if noticeably low budget. Amusingly, the pre-show short film, The Crimson Permanent Assurance, in which a gang of elderly bankers see their fortunes change when their firm is taken over by an American corporation and promptly set sail in their building to cut a swathe through modernised financial institutions, is a swashbuckling short film directed by Gilliam and spliced into the mid-point of the film proper at a crucial moment, which is both surprising and hilarious all at once. 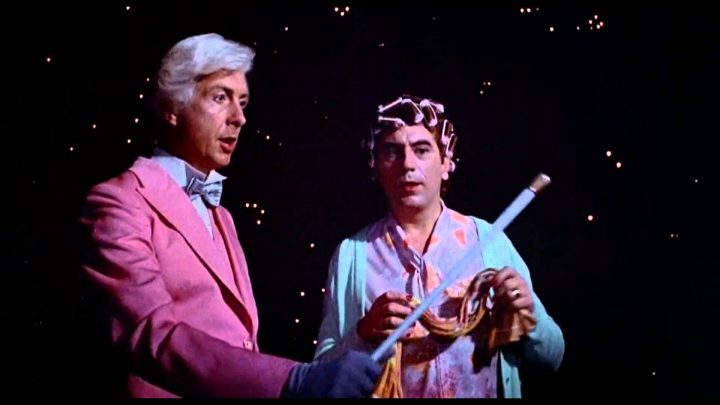 As with most comedies, there are flat spots (a scene in which a middle aged couple attempt to purchase conversations at a restaurant doesn’t work, nor does Eric Idle’s walkabout French waiter moment, in which he traverses almost an entire city only to get angry at the viewer and walk of in a huff) but unlike modern American films the rapid-fire pacing means they either don’t last long or are counterbalanced with a moment of genuine wit. One-liners, throwaway gags and non-sequiturs, together with vile, violent, sexually thematic and utterly un-PC humour are rampant through this film, a film in which women aren’t treated as anything more than shrews or sex objects, whilst religion, medicine, authoritarianism and social anxiety all come in for some stick. In their day, one suspects the Pythons for being ahead of their time in controversy (at least if anything The Life Of Brian achieved, no less) but today it’s a film less controversial than it is occasionally awkwardly regressive. That said, I still laugh like a drain whenever I watch it. And I watch it a lot. 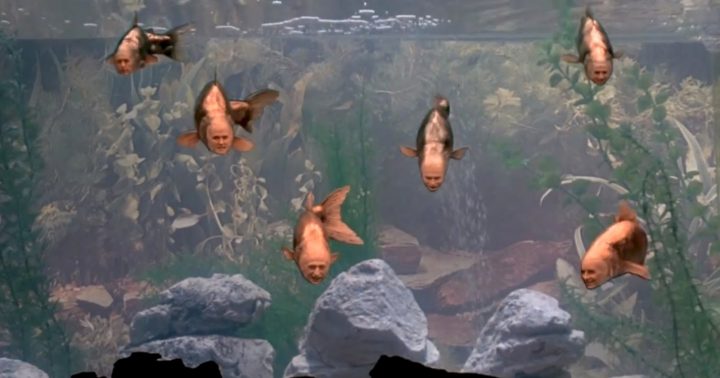 Monty Python’s The Meaning Of Life is a film about the journey, not the destination. The reveal of “the meaning of life” isn’t really the point, rather the fun to be had along the way (which is probably really the best way to describe the actual meaning of life, I think) and with its grab-bad of comedic skits and skewerings, through the cast’s straight-faced delivery of some of the most memorable comedy songs and beats in cinema history (I dare you to utter “one tiny wahh-ferrr” in anything but a French accent after seeing this film), the film stands tall as a classic of the genre.