Strange to think this German-made Nazi propaganda film, commissioned by Joseph Goebbels and banned shortly after its completion by the very same man, has been viewed by very few people in the years since it surfaced on hard-to-find DVD. Shrouded in controversy at the time – not the least for its director, Herbert Selpin, being reported to the Gestapo mid-shoot and hanging himself in prison in an apparent suicide (hint, it wasn’t), causing the cast and crew to unsuccessfully rebel against the Ministry – the 1943 German language Titanic is a product of its time and rarely manages to escape its extreme mandate: to showcase the bravery of German people and the fear of Allied nations including America and England, through the actions of its people. Fascinating to study, this Titanic is never much more than a curiosity, teetering on being a “great” film even given that its peculiar focus (and inclusion of several totally fictional German characters) offers very little honesty in depicting the actual event. 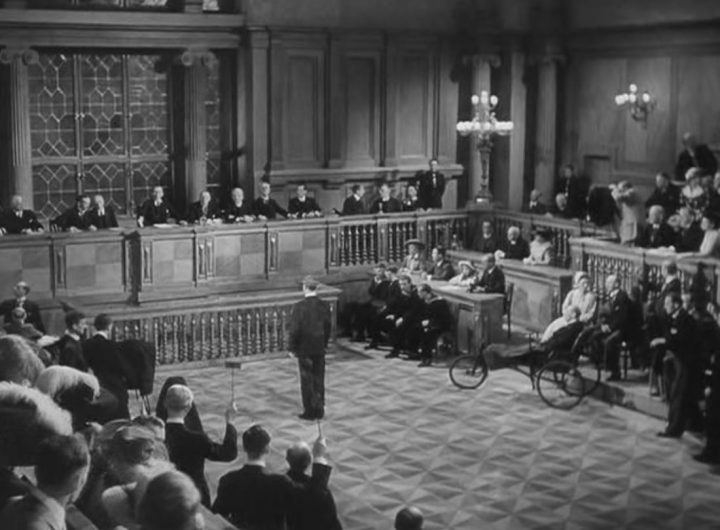 It’s 1912; shares in the stock price of White Star Lines are falling rapidly, and company president Bruce Ismay (EF Furbringer) has a plan for salvaging the company. Their latest vessel, Titanic, is due to set sale, and Ismay decides to use the ship to break all previous speed records and arrive in New York from London in record time. Aboard are socialite Sigrid Olinksy (Sybille Schmitz), wealthy businessman JJ Astor (Karl Schonbock) and his wife (Charlotte Thiele), as well as ships Captain Edward Smith (Otto Wernicke), bohemian steerage passenger Gloria (Kirsten Heiberg) and German 1st Officer Peterson (Hans Nielsen). As the Titanic speeds through the Atlantic, the Astor’s desire to break speed records puts him in danger of running the ship into an iceberg, something he believes will not affect the “unsinkable” ship. However, when Peterson’s cries to slow down fall on deaf ears, and the Titanic does strike an iceberg, all the money and greed in the world will not save over half the people aboard the stricken vessel, as she plummets to the bottom of the ocean. 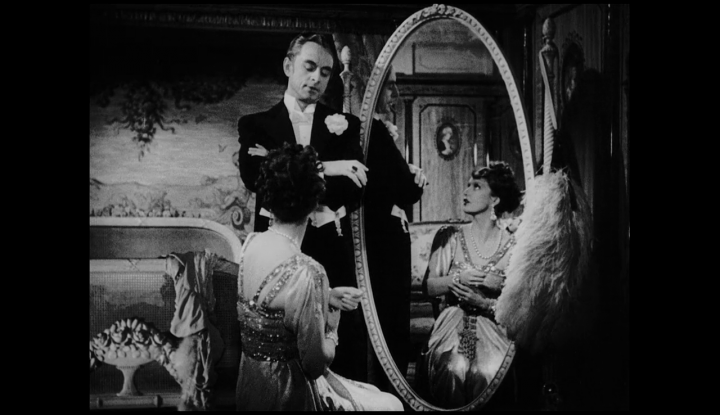 Decadence and fabulous wealth are the order of the day in this Titanic; namely, the film’s preoccupation with how rich the upper class passengers aboard are, and how much money Ismay could make off them buying shares in White Star Lines. It’s a strange tangent to take to this tragic story, although filtered through the Nazi thinking it’s actually rather hilarious. In trying to paint the English and American passengers as greedy, shallow vapid people, the film inadvertently takes the low-road in giving the German characters (one of whom is supposedly a violinist aboard, whereas in real life none such existed) a more pastoral, idealised charm. It’s a clever method of faking German superiority; in spite of the fact that even the non-German characters all speak fluent German, Titanic is actually an engaging, well filmed movie that takes its story and runs with it, for better or worse. 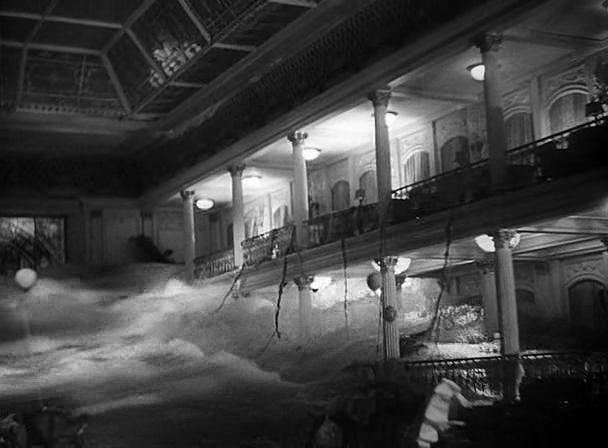 As you’d expect with a propaganda film, everything is slanted to being positive for the Germans. The sole German officer aboard is the one who exhorts the ship’s Captain (Otto Wernicke) to slow down when reports come through about the proximity of ice and icebergs, and he’s roundly howled down by the belligerent Ismay and the Captain. The entire crew are portrayed as incompetent and driven by either money or the promise of money, and much of the pre-sinking dialogue is the various persons aboard being introduced as scheming to make it rich, or trying to avoid insolvency, the theme runs aground quite quickly as tiresome and over-burdensome. 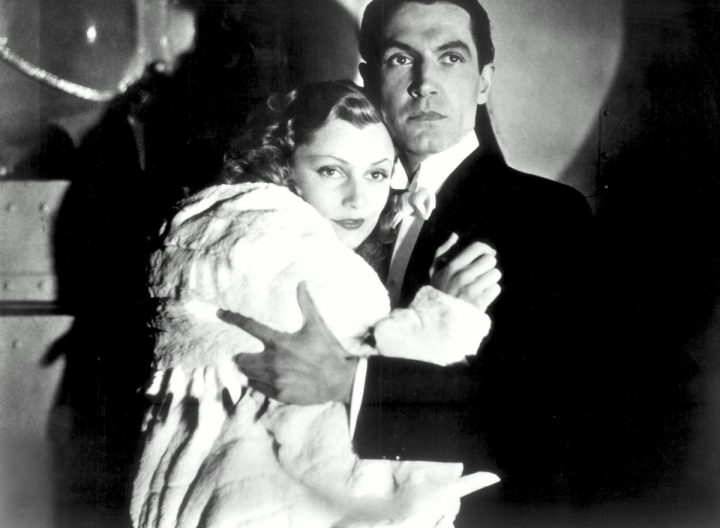 The characters within the film are all largely superficial, and unlike James Cameron’s 1997 film, there’s barely any development of note to anyone here. Furbringer’s Ismay is a driven, near-broke corporate shill, Nielsen’s Petersen the moral compass on which the film swings, and Sybille Schmitz evokes sympathy in indifference as a recently bankrupt socialite. The steerage passengers are portrayed as inherently kind and human, while the upper class character are all uncaring toffs who – it must be said – the film takes great pains to suggest their deaths wouldn’t entirely be undeserved. Karl Schonbock’s role as John Jacob Astor (the richest man on the ship) is worthy of attention if only that he provides the most naturalistic performance of all the cast, while Wernicke’s Captain Smith is solid if entirely unsympathetic (a stark contrast to the Cameron film version, in any case). Of course, once the Titanic hits the iceberg, and the situation turns to shit, all hell breaks loose and the film becomes a whole load of screaming, terror and watery visual effects. 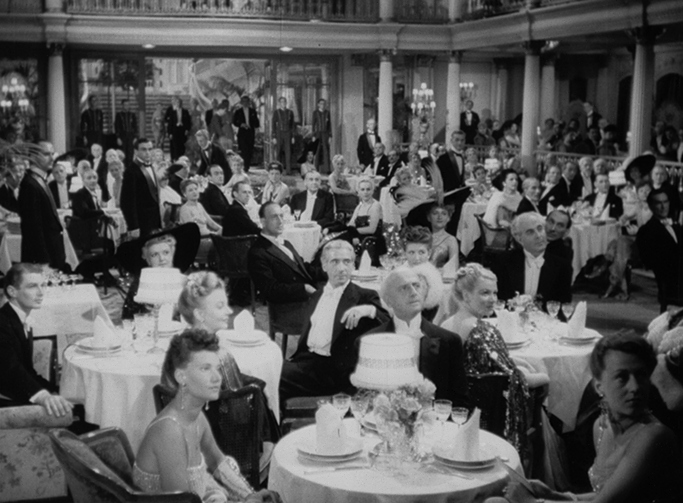 Production value on Titanic is really rather good. The luxurious cabins and dining rooms of the upper decks, the engine rooms and steerage cabins, and the top deck bathed in sunshine as people play, are all superbly rendered, whilst Herbert Selpin’s framing of certain sequences is far superior than I’d have expected. The cinematography is bright where required, offering stark imagery mixed with several cool model shots of the ship at sea, and although limited by 1940’s techniques there’s a showmanship on display here that shouldn’t be overlooked. Exactly where Selpin’s direction ends and replacement overseer Werner Klinger’s begins isn’t clear, and the film averts any obvious appearance of a troubled production, much to its credit. 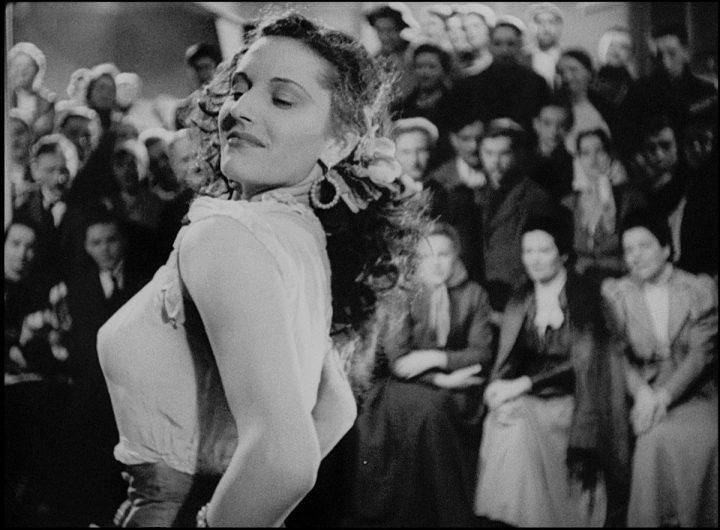 Comparisons with James Cameron’s epic film are inevitable at this point: key moments in the Titanic’s sinking play out almost exactly as Cameron shot his, notably the iceberg strike beneath the decks, the crowds of people rushing the lifeboats, and of course the band playing as the boat begins to slip beneath the waves. As with any retelling of this story, the class differences are stripped bare once again, only here the focus (or rather, blame) is on the indifference of the wealthy (and their hubris) rather than the plight of the poor folks below. Wisely, romance is largely absent here, with any hint of infidelity between Ismay and Olinsky brushed aside rather quickly. As an action film, the latter half ratchets up the tension as people struggle to escape, and the chaos is captured by the terrific camerawork. A key scene in which Olinsky is lowered to the sea in a lifeboat, staring back at Petersen, is reminiscent of the same shots Cameron employed for a similar “goodbye” moment with Winslet and DiCaprio, and is suitably moving within the framework of the film. There are other smaller callbacks I noticed, and you’ll have a fun time spotting them. 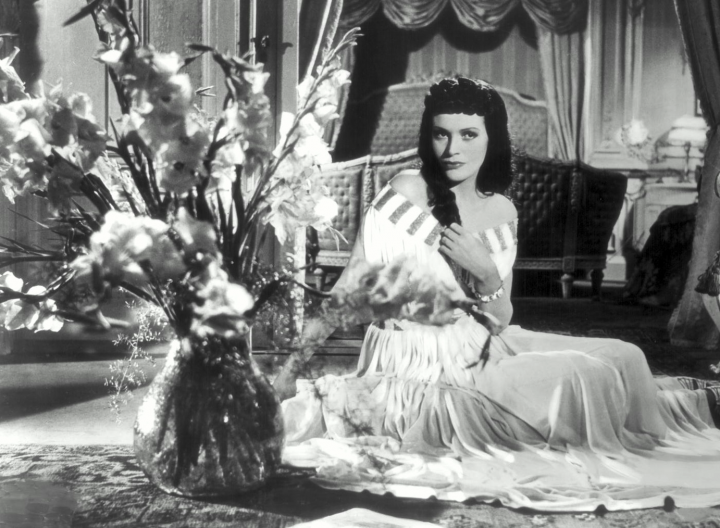 Nazi Titanic is, if nothing else, a handsomely mounted production of the ill-fated voyage that deserves reappraisal as a work of art. Sure, it’s motives aren’t pure, but as much as Triumph of The Will can be viewed in its proper historical context, so too this pointed, antagonistic piece of charlatanism in film form. The visual effects are effective, the cast do admirable work against an all-too familiar backdrop, and the overall effect is one of hubris and arrogance in the face of nature that resounds as much in this film as it has in any other version of this story. Despite its backstory as a Nazi-funded tool of propaganda, 1943’s Titanic remains effective and occasionally chilling, with occasional moments of raw screen potency that feel at odds with the film’s production. Worth a look for cinema buffs.