Inspired by actual events, and based on a popular novel of the same name, Frank Lloyd’s 1935 retelling of the infamous mutiny aboard British sea commander William Bligh’s ship, the Bounty, is a charismatic and deeply ferocious cinematic adventure. Despite notable historical inaccuracies, Mutiny On The Bounty is a story that simply becomes better with each retelling, as Charles Laughton’s belligerent and hideously callous Bligh stares down his indentured ship’s crew as they throw him off the boat, whilst Clark Gable (sans moustache, which came as a surprise) bucks against tyranny and oppression as only the White Man can. Blech. A product of its time, and certainly through no fault of its own, Mutiny On The Bounty was the last film to-date to win Best Picture without winning a single other award (although it was heavily nominated in acting and technical categories) and although a deserving winner at the time, time itself hasn’t been particularly kind to Lloyd’s melodramatic symphony of rage and resentment.

London, the late 18th Century – the British navy conscripts men aboard their fleet using press gangs led by lieutenant Fletcher Christian (Clark Gable). Aboard one such ship, the Bounty, the men come under the command of the tyrannical, contemptuous and utterly awful Captain William Bligh (Charles Laughton), who doles out discipline and punishment far outside the norm for such petty misdemeanours and absurd “crimes”. Also aboard the ship is idealistic midshipman Roger Byam (Franchot Tone), whose enthusiasm towards Christian and his ideaslied vision of being a British seaman bring him into conflicted discord with Blight, whose attitudes he cannot understand. Inevitably, ship-wide discontent provokes a mutiny, during which the pompous Bligh and several loyalists are cast into a smaller board and set adrift. 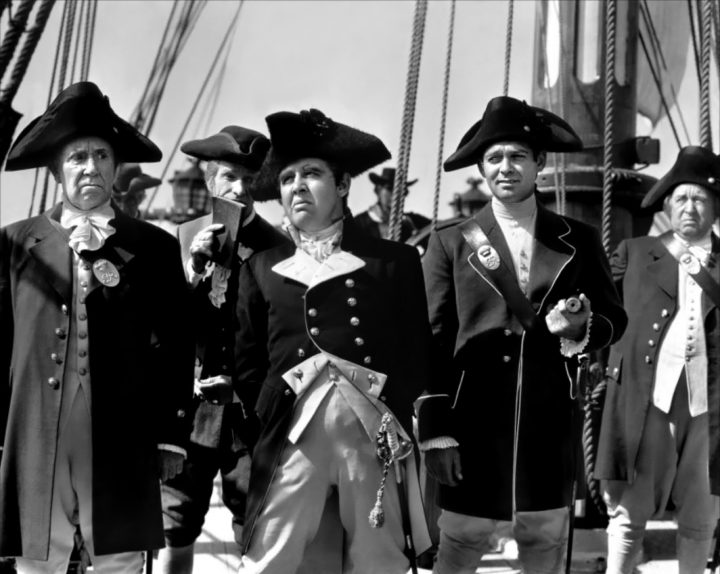 Mutiny on The Bounty came to cinemas with huge expectations; a rip-roaring true story, a dual-Oscar-winning director in Frank Lloyd (The Divine Lady and Cavalcade, the latter winning Best Picture only two years prior), and recent Best Actor Oscar winner (and Hollywood heart-throb) Clark Gable in a leading role, all mounted significant prestige on the film before it even arrived. Filmed predominantly in California (doubling for a large portion of the seabound sequences) and a smattering of French Polynesia, Mutiny On The Bounty was for-its-time a high octane dramatic affair that scorched the screen with Charles Laughton’s searing Bligh and Gable’s virtuous Fletcher Christian. Smaller roles to character actors such as Herbert Mundin (Cavalcade, The Adventures Of Robin Hood), Eddie Quillan (who reminded me of West Side Story’s Richard Beymer for some reason) and The Invisible Man’s Dudley Digges (as the Bounty’s drunken doctor, complete with a wooden pegleg, provide respite from the ongoing friction between the film’s leads, whilst the production value on the film is alternately excellent and amusing. 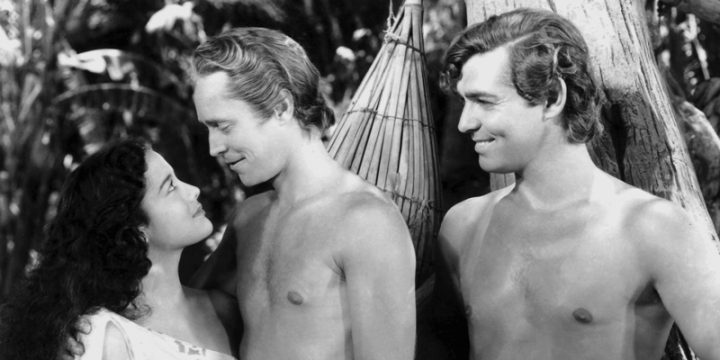 If you’re going to list a handful of memorable maritime events, there’s every reason to suspect that alongside the Titanic sinking, the infamous mutiny aboard Bligh’s Tahitian-bound vessel will appear somewhere. That, and Exxon continues to receive plenty of bad publicity. Although based on a book, the film takes some liberties with the story’s facts and either runs with them without concern or overlooks them out of ignorance and favouring dramatic license (poetic license, even). The screenplay, credited to Talbot Jennings, industry icon Jules Furthman (Shanghai Express, The Big Sleep) and Academy Of Motion Pictures co-founder Carey Wilson (Ben-Hur (1925) and Bolero, in 1934), boasts plenty of overcooked dramatic ham-acting with some subtle homoeroticism and sanitised sensuality, amping up the belligerence of Bligh to spin its epic tale of betrayal and freedom. The screenplay features some nice lines about man’s hatred of being unjustly persecuted – effectively, the Bounty’s story ended a much hated system of governance by the British navy, eliminating the press-gang entrapment scenario and ensuring the people on the ships actually wanted to be there. Sort of, at least. It’s entirely unsubtle and today feels a touch on-the-nose considering where we are with race relations and systemic corruption around the world, but the film’s heart-on-sleeve mandate for justice and humanity is still enjoyably presented. 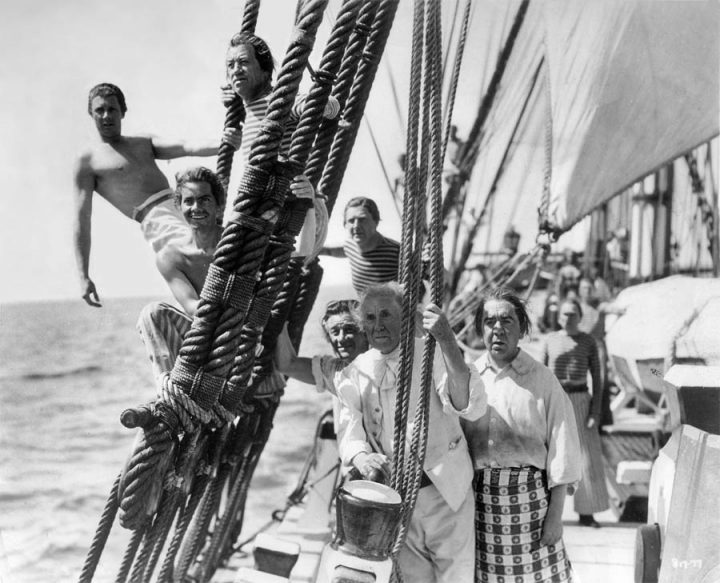 Much of the film’s success rides on the sheer odiousness of Captain Bligh, portrayed by an aggressively combative Charles Laughton. Considered one of the great actors of his generation, Laughton commands the screen in the role, towering over all as he berates, lambasts and insults those around him into doing what he commands; he orders a shipman to flog an already dead sailor for a supposed crime, regularly has others beaten for minor misdemeanours, and even goes so far as to keelhaul another (a sequence claimed to be erroneous by contemporary critics and historians). Whether accurate or not (I’m leaning towards not, at least for now) Bligh is a genuinely terrifying screen villain, prone to outbursts and foot-stomping histrionics that never stop. Almost no shred of humanity emanates from Laughton, never once giving us a glimpse into Bligh’s thoughts or personality other than that of simply being a despotic asshole: as a result, he makes the perfect foil of Gable’s upright Fletcher Christian. 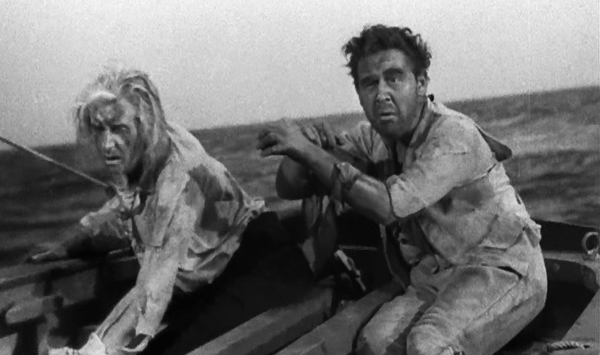 Whilst a dedicated seaman, Fletcher Christian wasn’t a faultless individual himself, although his actions in the mutiny itself indicate a man of virtue and honour despite his treachery. Pushed to breaking point by Bligh, his beseeching of Bligh to end his belligerent ways falls on deaf ears, so both his and our dismay. Gable radiates the Everyman persona, a man with high status who understands the “common man”, so much so that he cannot bear to see people mistreated with such scant regard for liberty. Although many of the men aboard to Bounty were conscripted, their prison-like conditions formed the primal torment through which Bligh exacted his petty fiefdom of control, and as with any powderkeg situation it only takes a single spark to ignite the flames of retaliation. Gable, who had to shave his trademark moustache for the role, feels like he’s “acting” in quotation marks the entire time, a style that feels too staged to be effective on screen. He flits between smiling engagement and fist-shaking outrage without pause, as demanded by the script, and while his dialogue might sing when you’re reading it, in Gable’s hands it feels clunky and laboured. If nothing else, Gable’s state of near continual half-dressed-ness through the film’s second stanza endeared him to legions of female cinemagoers, so there’s that. 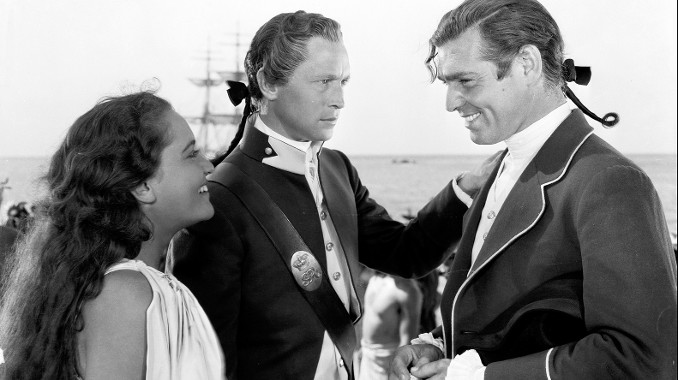 The chief problem I had with Mutiny On The Bounty wasn’t so much Gable’s performance or the film’s iffy use of rear-projection simulation of the lavish French Polynesian settings, but rather the lack of depth afforded to one of its key characters, that of Bligh himself. Whilst Gable’s Christian had a nuance and dignity to him, Laughton was entirely sturm-und-drang anger and belligerence, a one-dimensional character lacking motivation other than seeing men grovel. Laughton’s performance in the role is commendable – little doubting his Oscar nomination, for sure – but as a character I had hoped to at least understand the man’s continued rage. Without being able to, I felt shortchanged with many of the film’s later-act emotional tripfalls. The court martial which follows the mutiny, back in England, had the opportunity not only to showcase Franchot Tone’s idealistic mantra (which it did) but also Bligh’s arrogance unwrapped (which it did not) and I think this is a crucial mistake by the writers. We never get to understand Bligh, and by default our empathy with Christian as he and his men escape to freedom is the film’s most prosaic throughline. 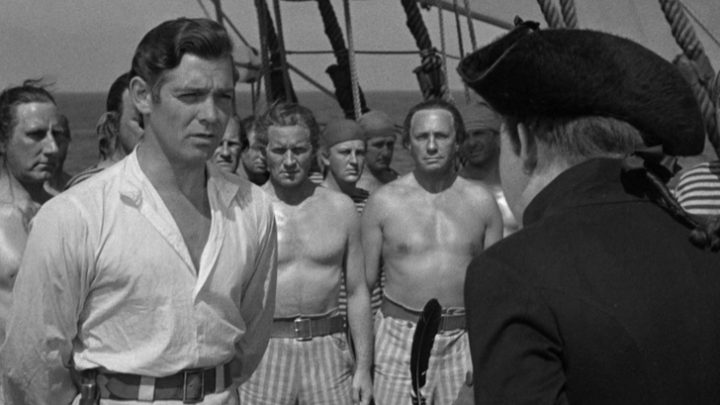 Mutiny On The Bounty may feature some historical inaccuracies and an overly simplistic view on the event itself, and doesn’t really examine the exterior motives that may have driven the men to rebel (some claim the hedonistic lifestyle the seamen encountered in Tahiti and their desire to return was the catalyst, even if Bligh’s diaries don’t appear to reflect this) but it’s a compelling and unique take on one of history’s most sensationalised maritime occurrences. Frank Lloyd’s direction is solid without being overdone, the cast generally over-act according to their respective screen-time, and there’s a sense of lavishness to the production that magnifies the tininess of the Bounty’s mission across the sea. Worthwhile, sure, but a touch creaky compared to other films of its vintage.